By: Julia Smirnova and Francesca Arcostanzo

The amount of content about Russia, Ukraine and the Russian invasion on social platforms has increased exponentially since the start of the war, especially among conspiracist groups. In our previous analysis, we found that German-language far-right and conspiracy circles had been spreading pro-Kremlin messaging on Telegram and Facebook in the months prior to the start of the Russian invasion of Ukraine. In this Dispatch, we look at how those same channels have addressed the war in the weeks following by looking at the narratives shared and domains amplified.

We collected the posts published by these channels and pages between 17 February (a week prior to the start of the war) – and 23 March 2022.

We used a list of 80 keywords (mostly geographical names and names of politicians) to identify posts related to Russia, Ukraine or the Russian invasion of Ukraine. Finally, we conducted a link analysis to identify the most frequently shared links and domains in this dataset.

The observed Telegram channels posted 76,303 messages during the period of analysis, of which 20,799 (27%) contained keywords related to Russia, Ukraine or the Russian invasion of Ukraine. Of those, 151 channels had published at least one post on this topic. The number of messages about the war reached its peak on the day of the invasion, 24 February,  and remained high throughout the first two weeks of the war.

Image 1. Volume over time of messages in the analysed Telegram channels.

The sample pages and groups posted 13,466 messages in the same period, of which 4,512 (34%) contained keywords related to Russia, Ukraine or the Russian invasion of Ukraine. From those, 261 public pages and groups published at least one post on this topic. On Facebook, the number of messages about the war exceeded the number of messages about all other topics in the first days of the invasion.

Image 2. Volume over time of messages by the analysed Facebook pages and groups.

Most shared domains in posts about Russian invasion of Ukraine

The top-10 most shared domains in Telegram– and Facebook posts about the war included links to the platforms themselves referring to other channels and messages, alternative social platforms, newsletter services, etc.

Among the most shared Telegram channels, the main English-language channel of Russian state media outlet RT (Russia Today) was the fourth most widely shared. Links to this channel were shared 198 times, and the link posts viewed 511,195 times. Links to this channel by RT were actively shared on Telegram by two German-language QAnon channels with an average of 30,000 followers, as well as a popular German conspiracy influencer Oliver Janich (158,700 followers). Following the EU-wide ban on RT and Sputnik, access to this channel was restricted by Telegram, however links were posted even after the ban.

In addition, analysed channels and groups posted links to two different accounts of RT DE, the German-language version of the Russian state media outlet, available on VK, a Russian social media platform. These two links had been posted 125 times and the link posts received 479,971 views on Telegram.

Image 3. Most shared domains in analysed channels on Facebook pages and groups and Telegram channels.

RT was still one of the most popular news sources

Within most shared domains of “news website” sites (regardless whether the content is independent news or misinformation), RT DE was the second most-shared media outlet, with 832 links shared, behind only the Epoch Times.

Image 4. Most shared domains of media outlets in analysed channels on Facebook pages and groups and Telegram channels.

In addition to sharing links to RT, channels have been actively sharing the link to a website offering a live-stream of RT DE (the link was shared 111 times and has received 420,845 views on Telegram). After the ban in the EU, RT DE began  promoting several alternative domains to circumvent access restrictions. Two of these domains have been shared in the analysed dataset, however much less frequently than the original domain de.rt.com (links to alternative domains have been shared 25 times).

Since rumours of the invasion, Russian officials and pro-Kremlin media outlets resurfaced the debunked conspiracy narrative about the US allegedly developing biological weapons in laboratories in Georgia and Ukraine for years. After the start of the invasion the international QAnon scene, particularly in the US, started to actively amplify the theory.

In order to analyse the trends around the spread of the narrative in Germany, we filtered for messages containing keywords “biolabs” and “bioweapons”. We then reviewed the most-viewed messages and most frequently shared links.

English-language QAnon conspiracy supporters have been spreading a variation of the narrative shared on Twitter by user @warclandestine, who was later suspended. The Twitter user claimed that the Russian army was targeting Ukrainian cities in which “US biolabs” were present, and published two maps allegedly supporting the claim. These maps, together with the translation of @warclandestine’s Twitter thread, have been shared by several German-language QAnon channels and conspiracy influencers. The Twitter thread has also been reported by a German-language Swiss misinformation website, popular in conspiracy and far-right circles, links to the article have been shared in the analysed channels. 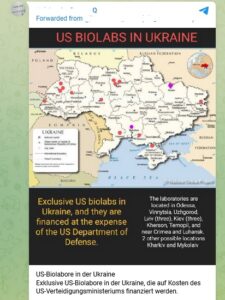 Image 5. An example of the map published by @Warclandestine shared in a German-language QAnon channel.

Another US-specific variation of the narrative that has gained traction in Germany links it with the pre-existing conspiracy about Hunter Biden’s alleged financial ties with Ukrainian oligarchs. In this version, QAnon supporters claim that Hunter was financing the US biolabs in Ukraine. The second most-viewed Telegram post about “biolabs” in our dataset (135,894 views) referred to this narrative variation. The message by a German conspiracy influencer contained an English-language video on this topic and referenced an article by Greg Reese, an editor with the US website InfoWars — known for spreading misinformation on various topics. 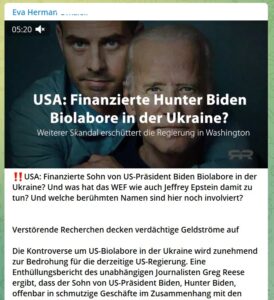 Image 6. A post by a German conspiracy influencer. [Translation: Text in the video: “USA: Did Hunter Biden finance biolabs in Ukraine? A new scandal shutters the government in Washington”. Text of the post: USA: Did son of US President Biden finance biolabs in Ukraine? And what has the WEF as well as Jeffrey Epstein to do with it? And what other famous names are involved here? Disturbing research uncovers suspicious money flows. The controversy surrounding U.S. biolabs in Ukraine is increasingly becoming a threat to the current U.S. administration. An investigative report by an independent journalist Greg Reese reveals that US President Biden’s son, Hunter Biden, appears to have been involved in dirty deals related to the labs.]

False claims about “US biolabs” were being spread in the German conspiracy scene years before the start of the invasion. In 2018, German conspiracy theorist Mark Hegewald released the film ‘Lab of Death’ supporting the Kremlin’s disinformation narrative about US-sponsored biolabs in Georgia. Now, the film is used by German-language conspiracy channels to support the current claims about similar labs in Ukraine. ‘Lab of Death’ was repeatedly mentioned by several popular Telegram channels. Xavier Naidoo, a German singer turned into conspiracy influencer, re-posted the film in his Telegram channel with more than 110,100 subscribers (the original post was from an explicitly pro-Kremlin German-language Telegram channel). The film was mentioned in an article on anti-spiegel.ru, a website run by Tomas Röper, a German living in Russia that has been spreading misinformation on various topics. A link to and quotes from the article were shared in Telegram conspiracy channels. 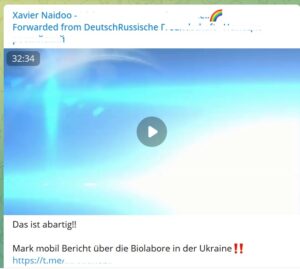 Image 7. Post by conspiracy influencer Xavier Naidoo. [Translation: This is sick!! A report by Mark mobil about biolabs in Ukraine!!]

Since the start of the war, Russian officials, including Vladimir Putin, have made several public claims supporting the “biolabs” conspiracy. The Russian Ministry of Defence published documents, which it claims prove that the US was working on a secret bioweapons programme in Ukraine. Russian ambassador to the UN, Vassily Nebenzya repeated the allegations at the UN Security Council. Despite these claims being unsubstantiated, they have been amplified and repeated by far-right and conspiracy actors.

The most-viewed Telegram message on “biolabs” in our dataset (147,131 views), which was posted by a popular German-language QAnon channel, referred both to the statement of Nebenzya and the documents published by the Russian Ministry of Defence. Another popular (64,891 views) Telegram post by a German conspiracy influencer, which repeated several paragraphs from an article published by Austrian misinformation outlet Wochenblick on the “biolabs” narrative, referenced the claims by Putin and the Russian Defence Ministry spokesperson, Igor Konashenkov.

Finally, the unsubstantiated claim by the Russian Ministry of Defence that the “biolabs” in Ukraine were experimenting with coronavirus, has been widely amplified in conspiracy Telegram channels. The claim has been repeated by several QAnon channels, as well as the aforementioned singer Xavier Naidoo, who posted an article by RT DE repeating the allegation of COVID-19 experiments. 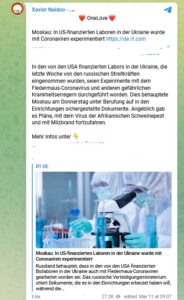 Image 8. Post by Xavier Naidoo featuring the article by RT DE on alleged experiments with coronavirus in Ukraine.

Since the beginning of the Russia-Ukraine War, large parts of German-language conspiracy and far-right circles have been amplifying pro-Kremlin disinformation about the war among Telegram channels, as well as public groups and pages on Facebook. In the days following, the number of messages about Russia, Ukraine and the Russian invasion remained high among these circles.

Despite the EU ban, Russian state media outlet RT DE continued to be one of the most frequently shared news sources in posts about the war. Additionally, pro-Kremlin narratives have been spreading, referencing a wide range of other sources, as we saw with the popular “biolabs” narrative. Conspiracy influencers and QAnon Telegram channels have been amplifying statements by Russian officials, using content from English-language conspiracy channels and German-language disinformation outlets such as Wochenblick and Uncut, as well as earlier footage to support this particular disinformation narrative. For the time being far-right and conspiracy circles in Germany remain susceptible to the Russian disinformation and actively promote it. This is a significant challenge to EU efforts to fight propaganda on the Russian invasion of Ukraine.