By: Julia Smirnova and Francesca Arcostanzo

The Russian invasion of Ukraine, which began on 24 February 2022, is likely to change Europe for years to come. It is an attack that has already taken the lives of hundreds of civilians and displaced hundreds of thousands more.

As missiles strike Ukrainian cities and Russian tanks enter Kyiv and Kharkiv, however, this invasion is also being fought at the propaganda front.

This research was made possible by tools provided pro bono by CASM for the purposes of assisting with ISD’s analysis of the Russia/Ukraine conflict.

The Russian state is directing a significant amount of effort towards influencing their domestic audience. Russian media watchdog Roskomnadzor has introduced a de-facto military censorship, demanding Russian media outlets base their reports about the situation in Ukraine solely on official Russian sources. The watchdog has started an investigation into the “dissemination of unreliable publicly significant information” against several independent Russian media outlets, and demanded that reports describing the ongoing invasion using the terms “invasion”, “assault” or “declaration of war” be deleted. Websites of several Russian media outlets have been blocked by Russian authorities for their coverage of the war.

However, Russian propaganda and information operations have also been targeting foreign audiences, particularly in Europe. As the war is still unfolding, the full scale of the disinformation and propaganda is yet to be determined.

In this Digital Dispatch, we will share several trends that we observed in German-language Facebook groups during the days prior to Russia’s invasion, and in the days immediately after it. The persistence with which the Russian authorities have been trying to obtain a broadcasting license for its German-language TV channel RT DE (Russia Today Deutsch) highlight how important the German audience is for the Russian state. After Germany banned RT DE in September 2021, Russia retaliated by shutting down the Moscow office of Deutsche Welle, a public owned international broadcaster, in February 2022.

Since the COVID-19 pandemic began, RT DE has spread false and misleading information about public health measures in Germany and other Western democracies. On one hand, this has been a continuation of its previous strategy to amplify domestic wedge issues and polarising voices in Germany. On the other, it has allowed RT DE to gain ground amongst online COVID-19 sceptic communities.

Analysis by ISD Germany in November 2021 revealed that the domain de.rt.com was one of the 10 most-shared domains and the 5 most-shared news websites in a sample of 279 German-language far-right and conspiracy Telegram channels. This analysis also showed that links to the 100 most-viewed RT-DE YouTube videos about COVID-19 were most frequently shared ​​in COVID-19-sceptic, anti-vaccination, far-right or right-wing populist Facebook groups.

In mid-February, as the risk of a full-scale war started to grow, we decided to investigate how the same Facebook groups that had frequently shared COVID-19 videos by RT DE were discussing the situation, and what links and web domains they had been posting.

A total of 50 German-language public Facebook groups and pages were analysed for this research, all of which had been observed to frequently post links to RT DE’s COVID-19 related YouTube videos.

The groups and pages were categorised as either COVID-19 sceptics, anti-vaxxers, far-right or right-wing populists. None of the groups or pages have a specific focus on Russia. We downloaded the posts published in these groups from 1 November 2021 (shortly after the build-up of Russian troops on the Ukrainian border) and 27 February 2021 (4 days after Russia’s invasion).

We compiled a list of 80 keywords to filter down these posts to only those related to Russia, Ukraine, the breakaway regions in Eastern Ukraine and the Russia-Ukraine crisis. Finally, we conducted a link analysis to identify the most frequently shared links and domains in this dataset.

There are two possible explanations for the popularity of RT in these groups.

In either case, the prolonged spread of misinformation on public health, migration, media and democratic institutions in these groups has made them a welcoming environment for pro-Kremlin propaganda.

Another frequently shared domain was barth-engelbart.de, a website which belongs to the German author Hartmut Barth-Engelbart. Content about Russia and Ukraine that has been recently published on his website mirrors some of Russia’s propaganda lines.

For example, one post published on 26 February 2022 (Image 1) uses the phrase “terror regime of Ukrainian fascists” to refer to the Ukrainian government. Another post about the start of the war (Image 2), headlined “Russian special operation against Ukrainian military infrastructure has started”, echoes the official Russian line that the army is targeting only military objects and no civilian infrastructure.

On 27 February 2022, Barth-Engelbart published an article promoting an old conspiracy narrative about alleged US bioweapons laboratories in Ukraine. This conspiracy narrative has been debunked, however it resurfaced shortly before the start of the war and has been pushed by pro-Kremlin media in Ukraine and by Dilyana Gaytandzhieva, a Bulgarian journalist. The article on barth-engelbart.de also contains links to the website of Gaytandzhieva. 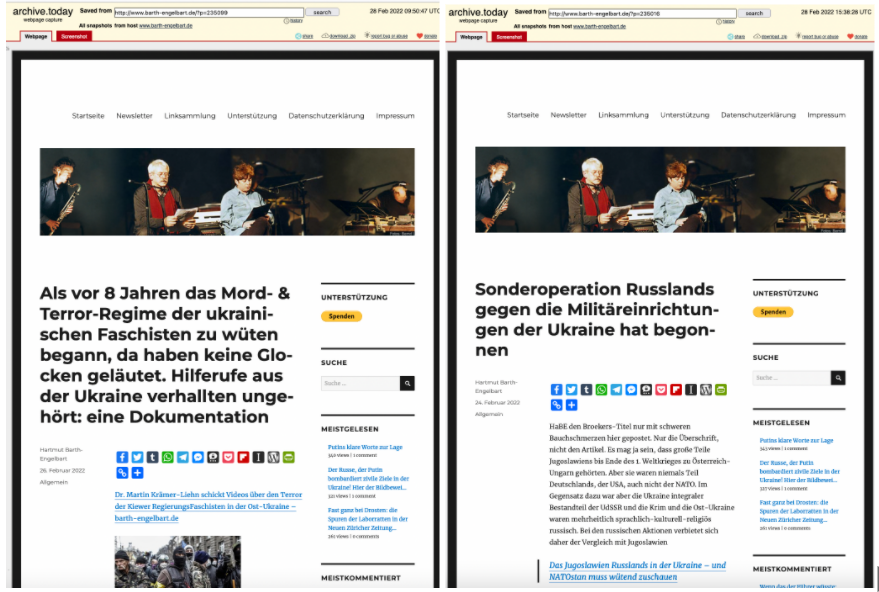 False and unproven information shared in the groups

Prior to the onset of Russia’s invasion, Russian state-controlled media started to spread unproven claims that Ukraine was allegedly planning a large-scale attack on the separatist regions of Donezk and Luhansk, which would have particularly catastrophic consequences for civilians. This narrative appeared intended to justify Russia’s own assault: Russia’s ordering of troops to Ukraine was later framed as an assignment to “perform peacekeeping functions”. While the majority  of claims have been spread in Russian, various examples could be also found in the German-language Facebook groups.

On 22 December 2021, a user shared a video by RT DE to one of the analysed Facebook groups, which featured  Russian Defence Minister Sergei Schojgu claiming that Ukraine was allegedly planning a “false flag” operation with dangerous chemical substances near Donezk. It was a re-share of a post by the page “Civic initiative for peace in Ukraine” which we identified as spreading pro-Kremlin content. 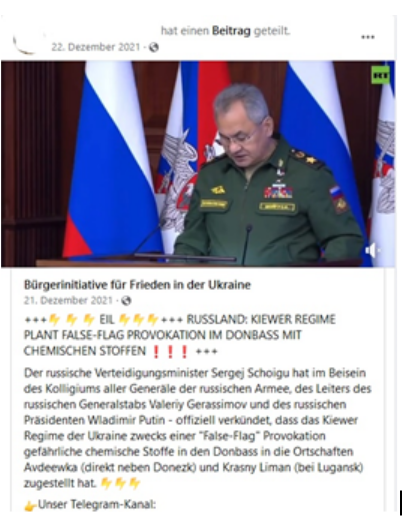 [Translation: URGENT ⚡⚡⚡+++ RUSSIA: KIEV REGIME PLANS FALSE-FLAG PROVOCATION IN DONBASS WITH CHEMICAL SUBSTANCES ❗❗❗ +++ Russian Defense Minister Sergei Shoigu, in the presence of the collegium of all generals of the Russian Armed Forces, the head of the Russian General Staff Valeriy Gerassimov and Russian President Vladimir Putin – officially announced that the Kiev regime in Ukraine has delivered dangerous chemical substances for the purpose of a “false-flag” provocation in the Donbass to the localities of Avdeevka (right next to Donetsk) and Krasny Liman (near Lugansk). ⚡⚡⚡]

On 21 February, two users posted the link to a video in four separate groups. The video claimed that the shelling of a kindergarten in Stanistya Luhanska by separatists was a Ukrainian false flag operation, without giving evidence to substantiate this claim. The video was recorded by the German-Russian blogger Alina Lipp, who has previously produced pro-Kremlin content. In the video she said: “The West simply wants this war at any cost and is looking for some sad horrible story with which they can justify an attack”. 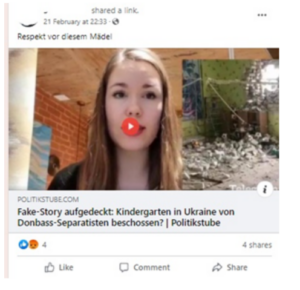 Russian propaganda has been using claims of an alleged “Faschist” or “Nazi” regime in Kiew since the Maidan revolution in 2014. This claim has been debunked multiple times. Following Russia’s invasion, prominent researchers of the Second World War, genocide and Nazism, issued a joint statement condemning the comparison of Ukrainian government to the Nazi regime. However, various examples of these false claims, from short to long posts, could be found in the groups.

On 27 February, the aforementioned author Barth-Engelbarth published a post in one of the Facebook groups calling the Ukrainian government a “fascist coup regime”. 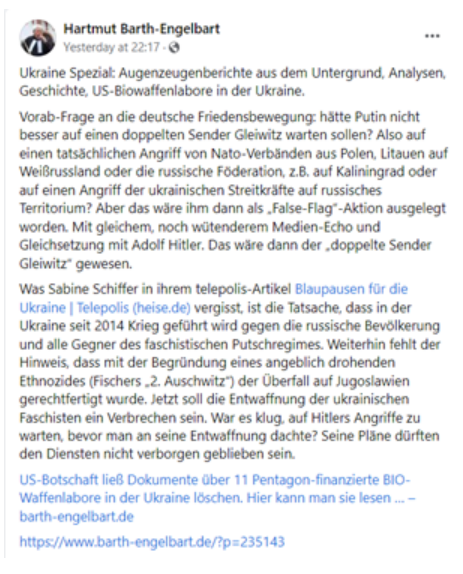 [Translation: Ukraine Special: eyewitness reports from the underground, analysis, history, US bioweapons labs in Ukraine.  Preliminary question to the German peace movement: wouldn’t Putin have been better off waiting for a double Gleiwitz incident? That is, for an actual attack by NATO formations from Poland, Lithuania on Belarus or the Russian Federation, e.g. on Kaliningrad, or for an attack by Ukrainian forces on Russian territory? But that would then have been construed to him as a “false flag” action. With the same, even angrier media echo and comparisons with Adolf Hitler. That would have been the “double Gleiwitz incident”.  What Sabine Schiffer forgets in her telepolis article “Blaupausen für die Ukraine” | Telepolis (heise.de) is the fact that in Ukraine since 2014 war is waged against the Russian population and all opponents of the fascist coup regime. Furthermore, the reference is missing that the invasion of Yugoslavia was justified with the justification of an allegedly threatening ethnocide (Fischer’s “2nd Auschwitz”). Now the disarming of Ukrainian fascists is supposed to be a crime. Was it wise to wait for Hitler’s attacks before thinking of disarming him? His plans were probably not hidden from the services. US Embassy had documents deleted on 11 Pentagon-funded BIO weapons labs in Ukraine. Here you can read them … – barth-engelbart.de]

On 26 February, a user shared a post to a group that was opposed to German arms supplies to Ukraine, in which they referred to “Ukraine Nazis”. 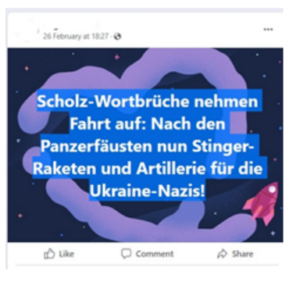 [Translation: Scholz breaches of promises are gaining traction: After the RPGs now Stinger missiles and artillery for the Ukraine Nazis!]

3. Claims about “genocide” in Donbass

In recent years, pro-Kremlin media have spread false claims about “genocide” and “ethnic cleansing” in Donbass. Before the start of the war, Putin as well as the Russian foreign minister Sergey Lavrov, repeatedly accused the Ukrainian government of “genocide”.

We found several  references to the alleged “genocide” in Ukraine. For example, on 24 February a user posted a link to an article by RT DE which discussed  Putin declaring the start of a “military operation” in Ukraine, explaining it with “genocide”. 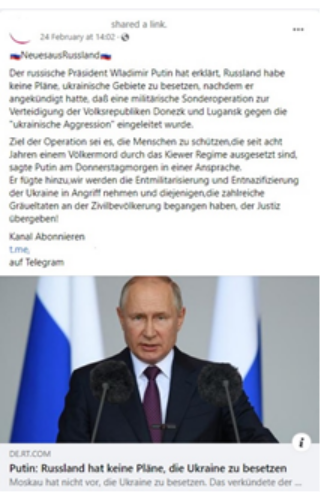 [Translation: NewsFromRussia Russian President Vladimir Putin has said Russia has no plans to occupy Ukrainian territories after announcing that a special military operation has been launched to defend the Donetsk and Lugansk People’s Republics against “Ukrainian aggression.” The aim of the operation is to protect the people,who have been subjected to genocide by the Kiev regime for eight years, Putin said in a speech Thursday morning. He added, we will start demilitarisation and denazification of Ukraine and bring to justice those who committed numerous atrocities against civilians! Subscribe to channel t.me/…on Telegram]

Russian propaganda is presenting Russia’s invasion of Ukraine as an operation to “denazify” the country and protect civilians. While this is unlikely to turn the public opinion in the West, there are online spaces that are more susceptible to these efforts.

As this study of Facebook groups has shown, online German-speaking communities of COVID-19 sceptics, anti-vaxxers, far-right and right-wing populists are among those more susceptible to Russian propaganda. In the months prior to Russia’s invasion, these communities – who were previously sharing RT DE COVID-19 misinformation on Facebook – began to share content from RT DE more frequently than any other news websites in their posts about Russia and Ukraine.