This Dispatch is a follow-up to previous research in which ISD demonstrated how RT DE, the German-language edition of Russia Today   , attracted a significant increase in followers on Telegram following bans from major platforms. Shortly after launching, RT DE’s Telegram channel faced local restrictions and was no longer accessible to German users.

This article examines how both RT DE and their audience are trying to circumvent restrictions. For this purpose, we collected all Telegram messages from the same list of 229 far-right and conspiracy theorist channels used for the previous research between 3 and 8 March 2022, and filtered them by keywords related to RT DE or its ban. We then manually reviewed the data to identify methods used to keep the Russian state-linked broadcaster accessible.

Both RT DE and its follower base were engaged in efforts to circumvent censorship. RT DE’s following has grown on numerous alternative sites including Odysee and VK.com, and it has set up multiple standalone sites with explicit instructions on how to evade restrictions, as well as promoting its app across its various platforms. Followers of RT have, for their part, begun to upload segments of broadcasts to Telegram channels and other platforms, and promoted RT DE’s social media profiles and livestreams.

Right after Telegram regionally restricted their channel, RT DE appeared to create a new channel, which was also quickly blocked. A third channel with a similar and 1,650 subscribers was deleted shortly before the time of publishing. However, its exact affiliation with RT was unclear. Amid all of the bans – even from Telegram, which is notorious for permitting illegal content – RT DE went a similar route to many other deplatformed disinformation actors: they found an even more fringe platform to spread their propaganda.

In the case of RT DE that platform was Odysee, a blockchain-based video platform that has gained media attention for hosting far-right content. Odysee themselves replied to calls for removing the account in a Tweet stating they would keep hosting RT since they “don’t care about politics”.  A second platform is Yandex messenger, where RT DE has around 250 followers. A week ago, it was less than 80.

Since the ban, RT DE has grown its following on VK.com, a website largely owned by Kremlin allies, where they have more than 18,500 followers at time of publishing. Their account is still accessible despite the EU-wide ban and they share the same alternative domain there as  on Twitter. Data over the last month shows that they managed to rapidly gained new followers after Telegram enforced restriction on 4 March. On this day, RT DE’s VK profile gained 441 new followers, more than on any other day the past month. 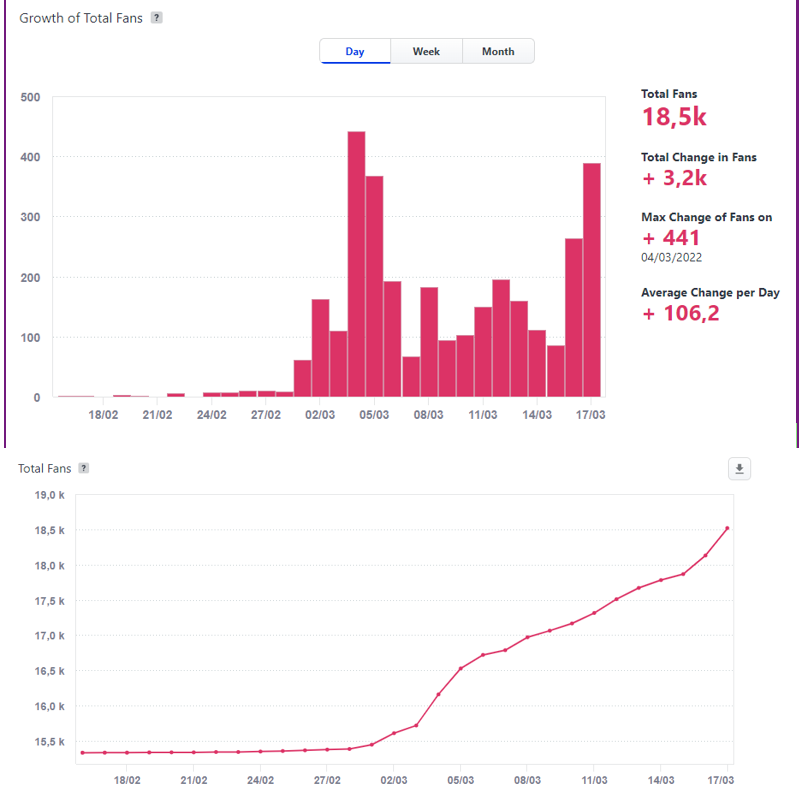 In addition to promoting their profiles on alternative platforms, RT DE has taken the extra step of registering new domains. Their original domain continues to be subjected to local restrictions in Germany. In response, RT DE started to promote three alternate domains, all of which look almost identical and have guidelines on how to access RT DE content despite the restrictions. Links to one of these domains are still shared via RT DE’s Twitter account, which should be inaccessible within the EU, but still receives user engagement, showing that the ban can be overcome. 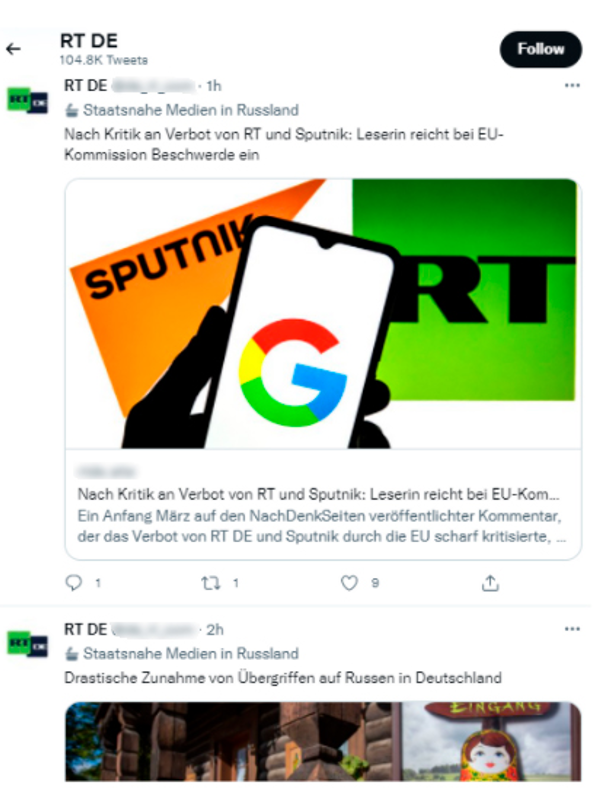 RT DE is also pushing their own app on social media and on their website they provide a direct download link for Android devices. They additionally share a link to the English-language RT News app (rather than RT DE) on the Apple App Store and Google Play Store. In the case of the App Store, they link to its Russian version, while for the Play Store they link to a non-country specific page.

In its years of broadcasting disinformation and half-truths in Germany, RT DE has built up a loyal follower base among those dissatisfied with the country’s media and political establishment. Consequently, many far-right and conspiracy theorist Telegram users have been sharing methods to circumvent RT DE’s ban. Some express sympathy as they also feel victimised by ‘unjust’ censorship. Among these groups, some commonly shared methods to access RT include the use of a VPN, the TOR browser, or DNS server switching. The instructions appear to come from the Telegram users themselves rather than from RT DE. Multiple guides to switching DNS servers were posted on Telegram and are now being proliferated by far-right, anti-vaxx and QAnon channels. Some users segments of RT DE’s broadcasts as videos or downloadable files on Telegram.

One curious example of these shared links is a URL leading to an RT stream discovered in an anti-lockdown channel. The channel, which until recently promoted mostly dates and locations of protests against public health measures, started to upload videos of RT DE directly, but in the text beneath the videos also promoted a link to watch RT DE despite the ban. The site it links to offers a stream in multiple image resolutions and strings of code to embed the stream into other websites.

Image 3: Screenshot of a website offering a livestream of RT DE.

The URL shows that the stream runs via 4everproxy, a VPN and web proxy service, which allows viewers to circumvent geo-blocked content. Whoever set up the website collects donations in Bitcoin. However, at the time of writing the wallet on blockchain.com showed no transactions. The wallet address also did not match the one through which the anti-lockdown channel collects donations, for which transactions were recorded. Nevertheless, this Telegram channel claims that they are “opening the channels to RT DE, so may continue [sic] to receive the Russian viewpoint without censorship”.

Links to the RT DE live stream page were shared in Telegram channels focusing on promoting the “Russo-German friendship”. From these groups or the anti-lockdown channel mentioned above, the videos and links were shared into the wider network of conspiracy theorists and far-right extremists. The anti-lockdown account gained 1,600 new subscribers between 8 and 9 March, though it has been losing followers since then. Nonetheless, it amassed more than 20,000 subscribers. 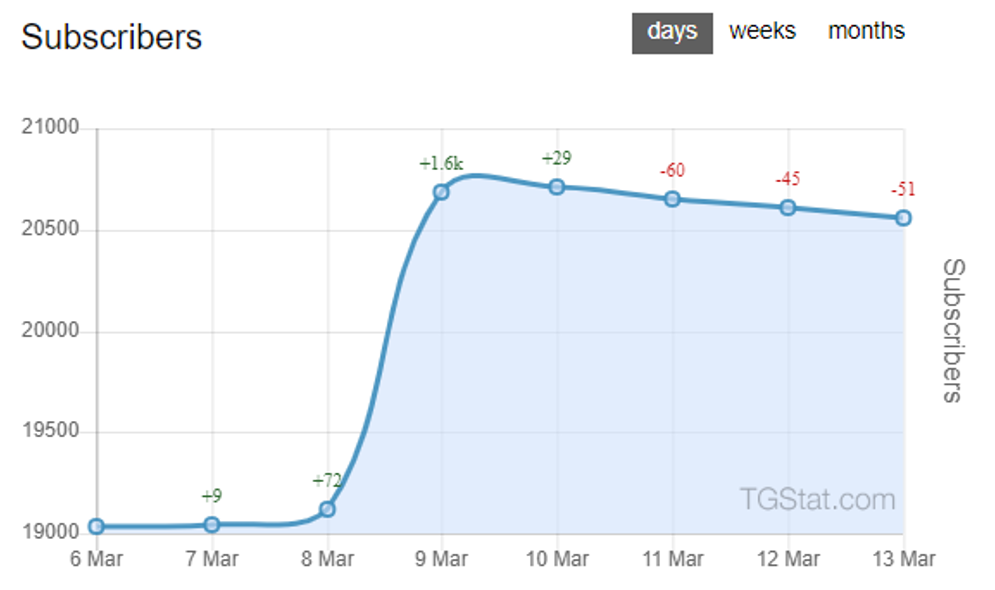 Image 4: Growth of subscribers on an anti-lockdown channel promoting a livestream of RT DE.

Well-known conspiracy theorist Kayvan Soufi-Siavash (aka “Ken Jebsen”) published RT DE’s instructions on how to find them on his website. A prominent lawyer affiliated with the German anti-lockdown ‘Querdenken’-movement shared a legal assessment of potential punishments for sharing and broadcasting RT DE content. In general, this community appears to be willing to go through some obstacles to retain access to the media outlet. After years of alarmist reporting on refugee numbers and vaccines, while attacking Germany’s political and media establishment, RT DE has become a favourite among those who believe that the country’s public broadcasters are concealing the truth on these matters. The affinity of those who saw their views reflected in RT DE’s reporting is now an asset for the Russian state broadcaster. The vast and closely linked Telegram network of conspiracy theorists and far-right actors provides an existing architecture to spread ways to circumvent local restrictions quickly and with ease.

RT DE is actively trying to circumvent restrictions imposed by social media platforms. It is deploying similar tactics as deplatformed extremists and conspiracy theorists have in the past, notably registering accounts on more fringe platforms. Additionally, they are helped by a supporter base, which they have managed to build over years and who consider RT DE to be a legitimate news organisation. Even without a direct link to RT DE, these supporters appear to be willing to continue spreading Russian disinformation on their own.

Lea Gerster is an Analyst at ISD Germany.