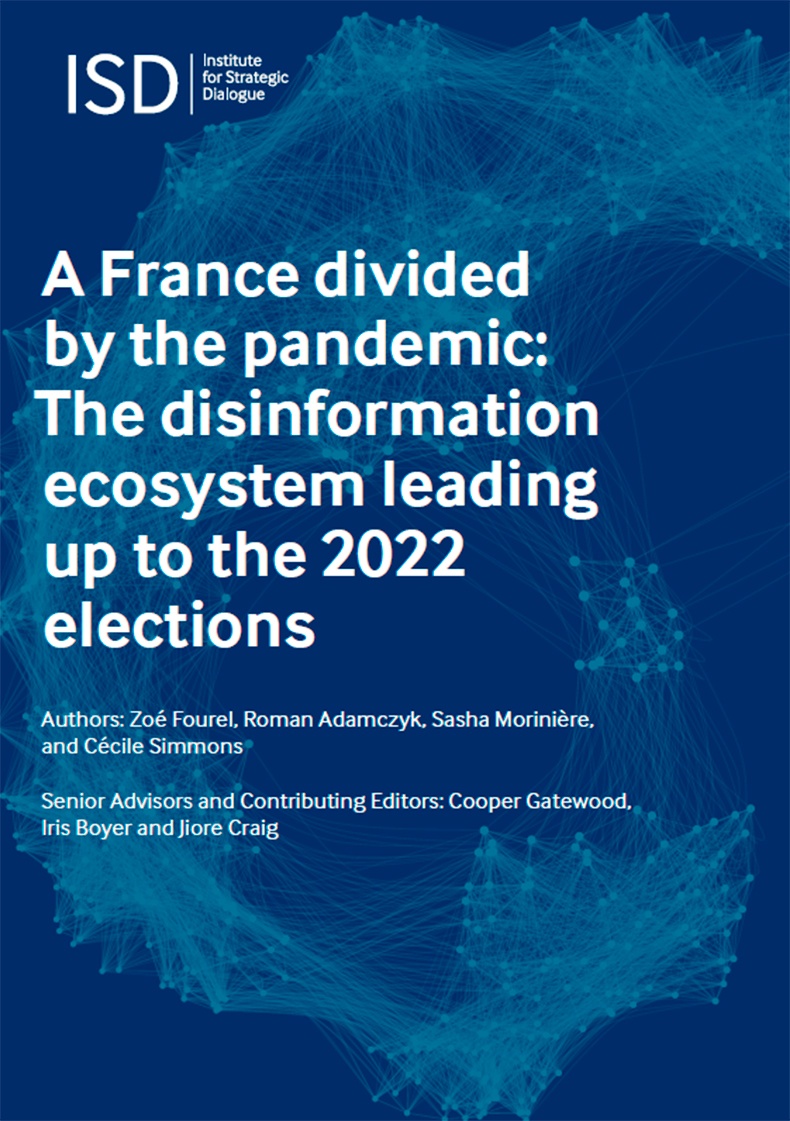 This report presents the findings of a project investigating mis- and disinformation ahead of the French 2022 presidential elections. Based on data collected during January 2022 and leveraging a combination of social media analysis, network mapping and qualitative analysis, this study provides an overview of the key communities which were actively spreading mis- and disinformation on social media platforms ahead of the elections, and the dynamics and narratives shaping these communities. The French disinformation landscape depicted in this report has been influenced by the period of data collection. In January 2022, online discourse in France was still very focused on the COVID-19 pandemic, the potential risks of the emerging Omicron variant and the controversies around the vaccine pass and other sanitary measures. As such, the communities described in this study represent a robust illustration of the evolutions and compositions of French conspiracist, extremist and disinformation ecosystems influenced online by a nearly two-year pandemic. This study also offers important insight into the dynamics within these online communities that spread disinformation and polarising discourse during the presidential campaign, which remain relevant long after the day of the vote. In order to better understand the role of these communities in spreading disinformation and polarising narratives, ISD has also produced complementary studies that focus on the period between the two rounds of voting in the presidential election as well as the outbreak of war in Ukraine.

Zoé Fourel  is a Research Coordinator at ISD. She is part of the Digital Analysis Unit, and is interested in social network analysis and mapping of online networks related to extremism, disinformation and hate speech. In particular, Zoé has been involved in ISD’s work on the dissemination of disinformation and hate speech in the context of various electoral processes. She is particularly involved in ISD’s French activity, contributing to research work analysing the French online ecosystem. She holds a degree in International Affairs from Sciences Po Lyon (including studies at the School of Oriental and African Studies in London and Georgetown University in Washington DC).

Roman Adamczyk is an Analyst at ISD, focusing on the French presidential elections. He holds two Master’s degrees in Geoeconomy and Strategic Intelligence from the Institute of International and Strategic Relations (IRIS) and Management from Grenoble Business School (GEM). Previously, he worked for the EU DisinfoLab as a Research Coordinator and OSINT Investigator, leading multiple investigations that uncovered disinformation operations targeting countries in the European Union and contributing to several studies about disinformation trends in Europe.

Sasha Moriniére is an Analyst at ISD. She is currently contributing to ISD’s research on disinformation campaigns, particularly those aimed to influence and disrupt the 2022 elections in France. Sasha previously worked at Moonshot and most recently contributed to the report delivered to the French President Emmanuel Macron about online disinformation and its impact on our democracies. She holds a Master of International Relations from the London School of Economics and Political Science. Sasha led various research projects on far right and on French Salafi communities as well as organised important political events as part of previous work experiences, notably at the Foundation for Political Innovation. She is fluent in French, Spanish, and is learning Arabic.

This report is available in French.

This paper examines algorithmic ranking practices of online platforms and how they may (negatively) impact online discourses and behaviour. It considers methodological and epistemic challenges of algorithmic auditing and looks at emerging approaches toward rethinking current ranking practices to safeguard safe and transparent online environments.