As the 2020 US elections took place, narratives about voter fraud that had once been confined largely to supporters of President Donald Trump became amplified into the mainstream.

The trends in results were clear: the more the counts went on, the more mail-in voting tipped the balance towards Trump’s challenger, former Vice President Joe Biden.

Relative to discussions leading up to the election, the weeks immediately before and after it saw more engagement on voter fraud issues from left-leaning or Democratic voices. Prior to this period, when the discussion was at a lower intensity, fringe, conservative and pro-Trump voices dominated the election debate online, as evidenced by a recent investigation by ISD and Politico concluding that conservatives dominate social media despite cries of censorship.

As engagement with the voter fraud narrative grew across social media in the aftermath of the election, ISD saw increased push-back from mainstream and left-leaning voices seeking to encourage people to vote while attempting to counter voter fraud narratives by presenting the facts about voting by mail. This balance was most clearly seen in the most widely shared posts, with content from former President Barack Obama and NBC News’ Geoff Bennet among the most shared posts.

However, pro-Trump and conspiratorial voices made up a greater portion of reposted material, some of which includes overwhelmingly identical or duplicated text. Most of these came from President Trump and those close to him, helping push the narrative that massive voter fraud led to a corrupt election result. Websites that pushed similar narratives contained the most frequently cited posts over this period, with links from sites like Breitbart, Federalist, the Gateway Pundit, and Project Veritas making up a majority of the top 10. 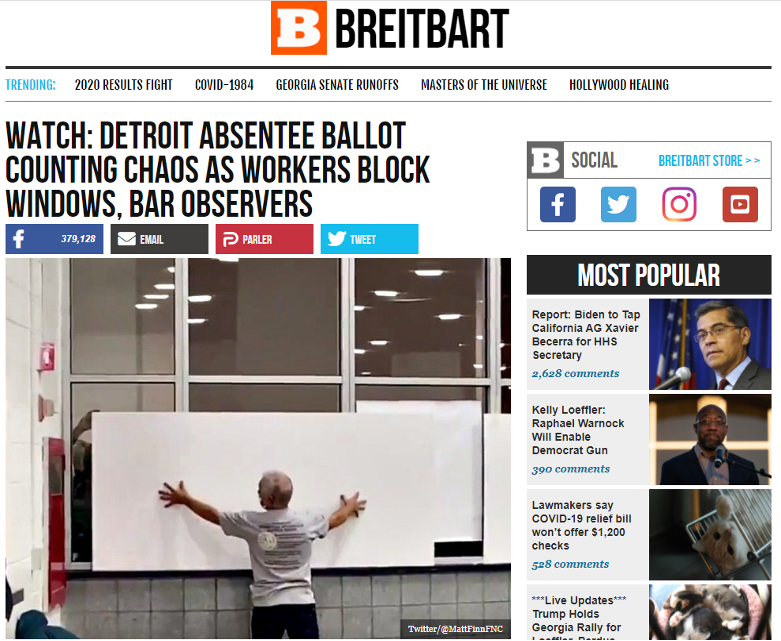 The most cited link in the dataset was this story from Breitbart, which appeared 5,587 times.

From fringe to mainstream

Overall, this paints a clear picture of how voter fraud narratives travelled. Looking at the most copied messages and the most cited URLs/domains in the dataset, eight of the top ten put forward claims of fraud, mostly unsubstantiated. The narrative was first seeded by fringe, right-wing and/or pro-Trump sources who enjoyed considerable success in the first instance by getting supporters to widely engage with the content. By the time of the election’s conclusion, mainstream and Democratic voices had begun to push back.

The problem was that by this point they were merely reacting to a narrative that was already garnering over 1m posts per day and heavily skewed toward unfounded conspiracies. It was too little too late. Indeed, such reactions arguably served only to amplify the original voter fraud narratives as  the most cited websites continued to be those that pushed disinformation and conspiracy theories.

This sequence of events shows the importance of meaningful and significant pushback against misleading narratives – even or perhaps especially in their early stages. Given the diametrically opposed nature of such contrasting views it is extremely difficult to alter a perception or idea once millions of users are engaged in discourse that supports it.

Cooper Gatewood is a Manager within ISD’s Digital Research Unit, focussing on quantitative research into the spread of hateful and polarising narratives online, and how they are leveraged by extremist actors. Cooper also develops monitoring and evaluation frameworks for a number of ISD’s education projects and is fluent in Spanish and French, as well as speaking proficient Japanese.