The “Great Reset” conspiracy is a small but growing online conspiracy that claims a global elite is using the coronavirus pandemic to dismantle capitalism and enforce radical social change. This Dispatches post examines how the conspiracy is growing among online communities in the Netherlands, and how Thierry Baudet, the leader of the Dutch right-wing populist party Forum for Democracy, has played a key role in mainstreaming it.

When public figures promulgate conspiracy theories, the reach of these narratives is expanded exponentially. Research from the Reuters Institute last year concluded that politicians, celebrities and public figures generated 69% of social media engagement around coronavirus misinformation, even though they accounted for only 20% of the misleading posts.

The spread of the “Great Reset” conspiracy throughout the Netherlands makes clear how,  in a short space of time, a high profile political figure can use Facebook to significantly inflate what was previously a marginal conspiracy theory.

The Great Reset is the name of an initiative launched by the World Economic Forum (WEF) in June 2020 that called for “fairer outcomes” and a rethinking of global investment and government expenditure in order to revive the world’s economy in light of the catastrophic economic effects of the pandemic. Conspiracy theorists believe this initiative is in fact a plot to destroy capitalism and enact a one world government under the cover of COVID-19. The key elements of the “Great Reset” conspiracy, as analysed in the Guardian, are that the “global elite is using COVID-19 as an opportunity to roll out radical policies such as forced vaccination, digital ID cards and the renunciation of private property.”

What was first a marginal conspiracy theory confined to the fringes of the web has, since November 2020, become a disinformation ecosystem in itself. This is in part thanks to amplification from right-wing US media figures including Ben Shapiro and Tucker Carlson, who have appropriated elements of the “Great Reset” theory as proof of a supposed plot to erode freedoms and capitalism. The Anti-Defamation League has also tracked the conspiracy’s antisemitic tropes that claim the WEF is “controlled” by Jews who are using the “Great Reset” to set up a “One World Government.”

The Great Reset in The Netherlands

ISD’s analysis shows that between 1 June 2020 and 2 February 2021, there were at least 1,983 posts that mentioned the “Great Reset” on Dutch language Facebook pages and public groups. At first, discussion of the conspiracy was minimal, although it grew steadily before skyrocketing in January 2021. 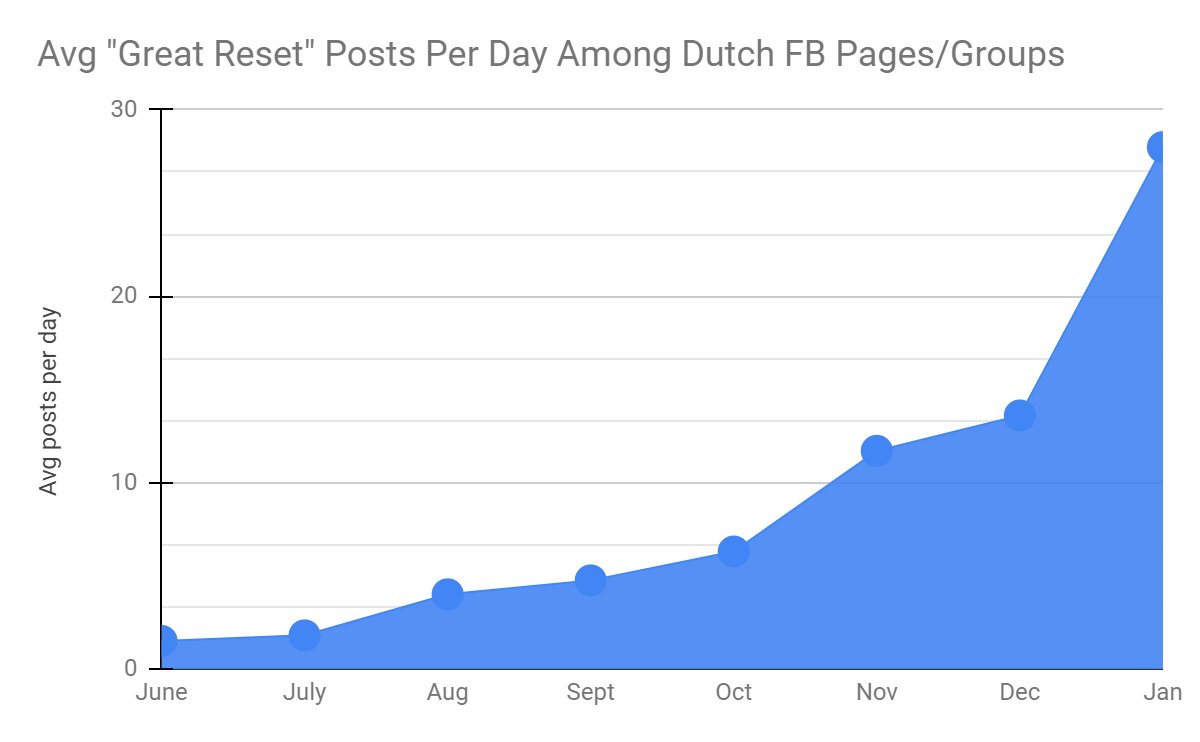 But who is talking about the theory? The most prolific communities promoting content about the “Great Reset” are a cluster of Facebook groups that frequently feature COVID-19 misinformation. Two such communities are the linked Facebook groups,  Nee tegen de Corona maatregelen (1) (No to Corona measures) and Nee tegen de Corona maatregelen (2), run by the same Facebook users, with 49,600 and 41,900 members respectively. Between them, from June to February, they featured 58 posts that discussed the “Great Reset”. These Facebook groups had previously been identified by ISD analysts, as in the last 12 months they also hosted content that promoted the QAnon conspiracy.

One post shared in the Nee tegen de Corona maatregelen (1), and since removed, promoted a since-deleted blog that featured antisemitic disinformation about GroenLinks party leader Jesse Klaver. This suggeststhe “Great Reset” is being used as a vehicle to share far-right and antisemitic material across various countries. 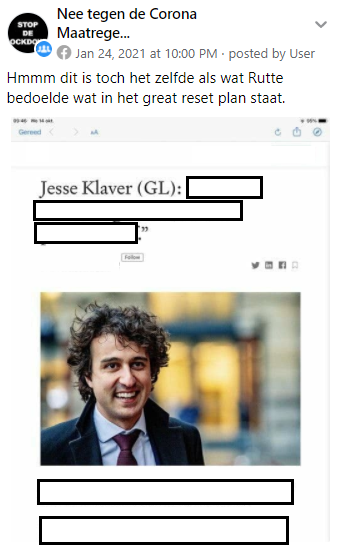 Screenshot from a since-removed post in the Facebook group Nee tegen de Corona Maatregelen 1 promoting a since-deleted blog post about Jesse Klaver. Caption: “Hmm this is the same as what Rutte meant in the “Great Reset” plan” [translated].

Conspiracy influencers have also published articles and videos in support of the “Great Reset” conspiracy on websites and other online platforms. A variety of these were captured within our dataset, highlighting how the conspiracy is supported by a network of content creators across the web who supply misleading material for networks of Dutch Facebook communities.

One such influencer is a Dutch conspiracy theorist who interviewed an academic who claimed that the “Great Reset” will lead to “undemocratic governance” and “dictatorship.” The video has been viewed over 239,000 times and has been shared on Facebook over 5,300 times to date. A conspiracy website that has published ten stories on the “Great Reset” since October 2020, including claims about Bill Gates, Al Gore or WEF founder Klaus Schwab, has received over 9,200 interactions on Facebook to date.

On 26 January, as the WEF’s virtual Davos meeting got underway on their chosen theme of “The Great Reset,” Thierry Baudet, the leader of right-wing Forum for Democracy party, used Facebook to ask if the coronavirus was being used as a “crowbar” for a ‘New World Order’ as part of the “Great Reset.” In a follow-up post on the same day, Baudet shared a video of Dutch Prime Minister Mark Rutte using the phrase “build back better,” which is one of the WEF’s aims for a post COVID-19 recovery. The phrase has been used by other world leaders in recent weeks, including US President Joe Biden, British Prime Minister Boris Johnson and Canadian Prime Minister Justin Trudeau. Baudet leaned towards a conspiratorial interpretation of these events, asking in a Facebook post, “Where did that slogan come from, why do they use it? All of them at once!?”

These Facebook posts garnered considerable attention, receiving 9,865 and 11,354 interactions respectively, making them the two top performing posts promoting the “Great Reset” conspiracy in the Netherlands to date. Prior to this, only five “Great Reset” Facebook posts surpassed 1,000 interactions since June 2020. The impact of a public figure promoting the conspiracy was immediately clear to see. This poses a serious problem when an increasing number of public figures  – including former U.S. President Donald Trump – are embracing conspiratorial narratives. What is less clear, however, is to deal with it.

The already problematic  discussion over effective ways to systematically tackle misinformation amplification is made more difficult by the fact that potential solutions often also raise tensions over free speech and platform policy concerns. The solution remains elusive. But in the meantime, systematically highlighting when public figures amplify misleading narratives and the way in which social media platforms are so often used as tools to bring these narratives to ever wider audiences are the first steps in addressing what is a considerable challenge. 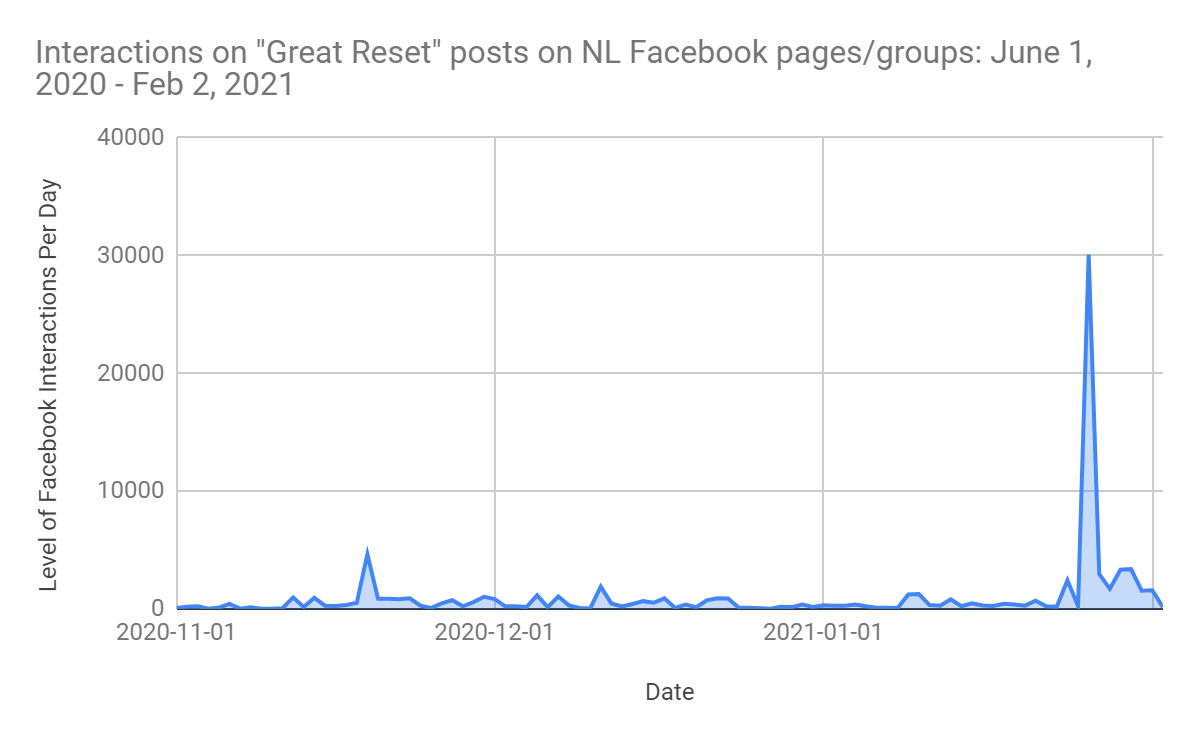 Baudet is no stranger to conspiracy theories. In 2020, he claimed that Jewish philanthropist George Soros had manufactured COVID-19 to “steal our freedoms,” and he also promoted the podcast of Lange Frans, one of the best known QAnon influencers in the country.

Baudet’s broader role in amplifying and mainstreaming the conspiracy is clear. Following his comments, the average number of interactions on “Great Reset” posts surged to over 2,500 posts per day, while 27 January alone saw 116 posts about the conspiracy – the most on any day thus far. The case of the “Great Reset” in the Netherlands is, therefore, instructive. It demonstrates the ability of high profile public figures to take what are previously marginal conspiracy theories and inflate them considerably – and to do so in a very short space of time.

This is a significant problem when we consider that the number of high profile figures embracing conspiratorial narratives (including former U.S. President Donald Trump) is on the rise and that our public sphere is increasingly curated. It is a problem that could also be countered. To do so, however, we must determine the most effective ways of developing rapid response strategies that work to flag and mitigate against such activities, and which do so in an equally robust timeframe.

Ciaran O’Connor is an Analyst on ISD’s Digital Analysis Unit with expertise on the far-right and disinformation environment online and open-source research methodologies. Before joining ISD, Ciaran worked with Storyful news agency. He has an MSc in Political Communication Science from the University of Amsterdam and is currently learning Dutch.