There is an emerging firearms community in the US consisting of armed left-wing activists and antifascists that has grown on Instagram since 2020. We are calling this community ‘Left-wing Gunstagram’.

Its emergence follows a steady rise in far-right violence, two years of record gun sales and a year of protests and civil unrest following the murder of George Floyd that saw armed mobilisation by demonstrators and 22 gun-related deaths between May and October of 2020.

While the vast majority of this armed mobilisation and violence was conducted by far-right groups, there has also been a very small number of incidents involving armed left-wing activists, including both fatal and non-fatal shootings. On August 22, 2021, when antifa activists returned fire on a man after they were shot at during clashes with the Proud Boys, a right-wing extremist group, in Portland, Oregon. More recently, on September 4, Proud Boy organiser Tusitala “Tiny” Toese was shot in the foot by an antifascist counter-protester in downtown Olympia following an anti-vaccine protest.

While there are no known direct links between these incidents and Left-wing Gunstagram, the community potentially offers insights into factors driving an increasingly armed left. To further understand the main narratives in Left-wing Gunstagram, 76 active accounts were analysed using CrowdTangle (a Meta-owned tool for the analysis of public Facebook and Instagram pages and groups) and over 6483 posts were collected as we set out to understand the main topics of discussion among this emerging community. Accounts were identified by content, self-declared political beliefs in bios, usernames or profile pictures and belonged to gun clubs, merchandise distributors and individual armed left-wing activists. Accounts belonging to official chapters of the well-established Socialist Rifle Association were excluded to capture activity linked to the newer wave of armed left-wing mobilisation on Instagram.

Nearly all of the accounts identified were established in 2020 and 2021. Only a few originated in 2019, and just two were established in 2016 and 2017, but did not begin posting pro-gun content until 2020 and 2021, respectively. This would suggest that while increasing armed left-wing mobilisation occurred during the Trump Presidency, the growth of the Left-wing Gunstagram community appears to be a more recent phenomenon.

A central justification for obtaining or learning how to use firearms was for the need of self-defence against the far-right. Users stressed the need to arm and train together in anticipation of facing far-right violence, referencing escalating clashes between the far-right and far-left as well as rising hate crimes against transgender people and people of colour.

In one such post, a photo of the gunman firing on Portland antifascist demonstrators in August 2021, was accompanied by the caption: “This fascist is armed. Are you?”, with another user commenting the image represented “exactly why we need to be out there training and training our friends” (see Fig.1).

The reasoning for community defence is coupled with a lack of faith in the police to provide protection. One user, who said he turned to guns in 2019 after far-right actors compiled lists of interracial couples online, posted an image of his rifle and tactical equipment in a post explaining his lack of faith in others for security: “We cannot rely on anyone else to keep us safe. I frankly hope I never have to don this gear in a real way, but I train because someone who wishes I was dead trained today” (see Fig. 2). 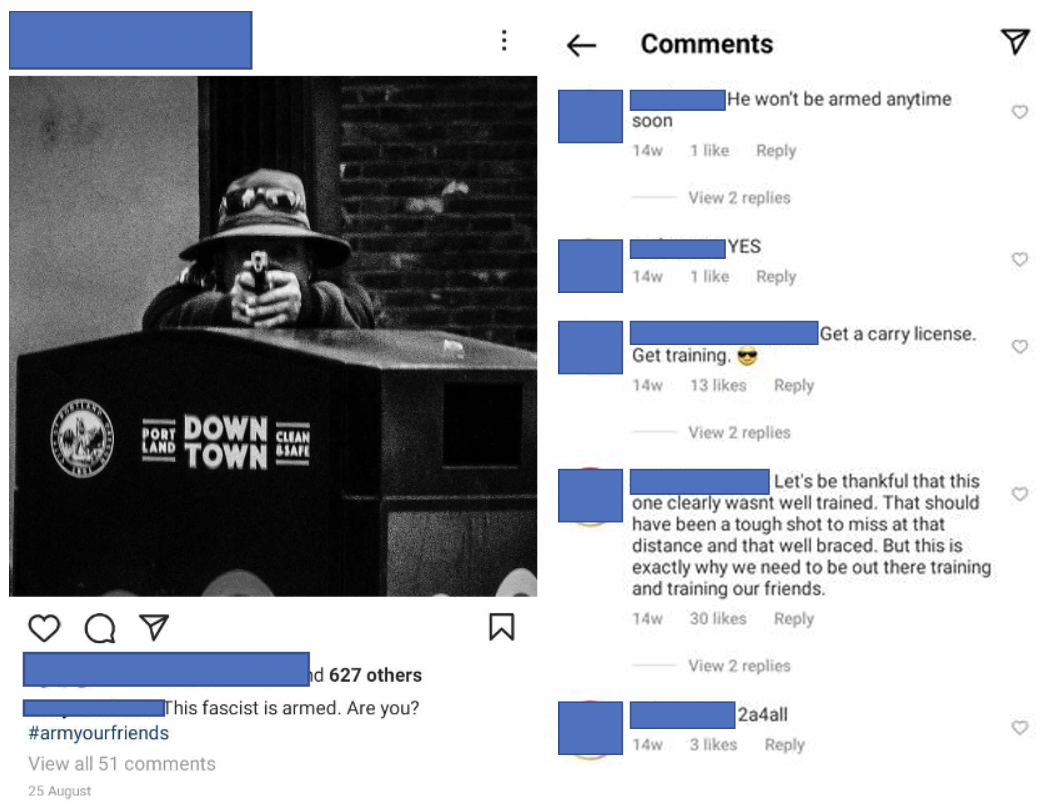 Another core theme is the need for establishing safe and inclusive environments for people of colour, women, members of the LGBTQ+ community and those with left-wing views to train within a gun culture that is often dominated by right-wing politics.

Groups offering firearms training promise “open, accepting, and safe spaces” for beginners to practice, while others discuss being cognisant of how they behave or express their politics in firearm-related spaces, recommending that followers keep a low profile to avoid confrontations and the loss of access to ranges. In other cases, users called out the use of camouflage popular within mainstream gun culture for their association with white supremacy, such as Rhodesian Brushstroke or Flecktarn, a pattern popular with neo-Nazi groups like Atomwaffen (as well as several national militaries).

Much of the content is geared towards new gun owners and beginners, with advice on purchasing the right equipment and basic training tips. Correct firearm selection is crucially important, with those who choose Soviet-era weapons like Makarov pistols, SKS or Moisin rifles because of their association with communism, labelled mockingly as ‘Red Fudd’s’. Instead, more practical modern and customisable weapons are recommended. Training with equipment, such as running in plate carriers is also encouraged, as one user explains: “If they can have it, you can have it…When the time comes, just having gear won’t mean a thing if you can’t run it” (see Fig.3).

Notably, there is a growing emphasis on investing in more advanced tactical level training, such as focusing on movement, teamwork and firing under pressure. A diversity of skills beyond the use of firearms is also strongly encouraged, such as the pursuit of medical training and familiarisation with radio equipment. 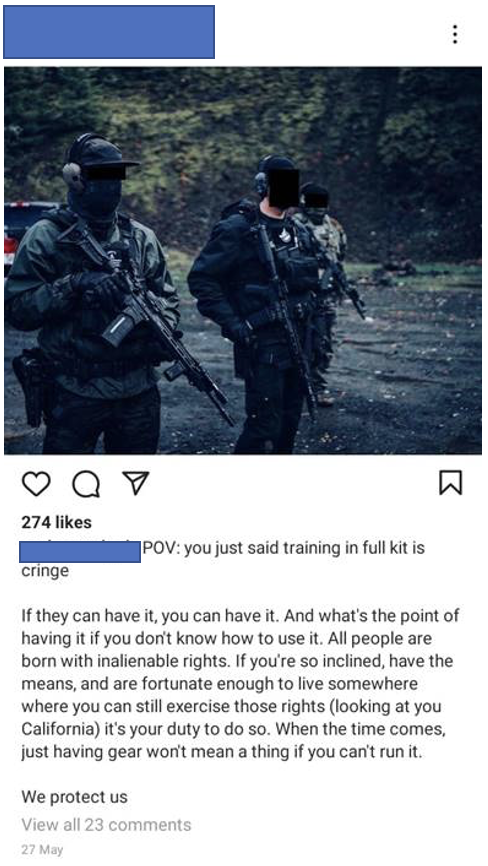 Given the image-based nature of Instagram, much of the content is aesthetics-focused with the visual culture of the community playing an important role in gluing it together. Users share images of their tactical equipment seeking feedback and advice on their set-up or write short reviews on gear and accessories. Some model their tactical gear and firearms in sets of edited photoshoots. Morale patches are nearly always displayed on plate carriers or pouches, with a number of prominent Left-wing Gunstagram accounts selling their own custom patches featuring Anarchist and Antifascist logos and slogans such as: “Under No Pretext”(see Fig.4), “All Cops Are Derek Chauvin” or “Make Racists Afraid Again”.

Merchandise includes clothing, gun cases, stickers and even custom-made laser engraved dust covers for AR-15 rifles (see Fig. 5), including a design featuring a can of Campbell’s soup with the phrase ‘for my family’ on the other side. This references comments made by Trump during a speech, where he said anarchists were claiming they were carrying soup for their family but throwing them at police during protests. 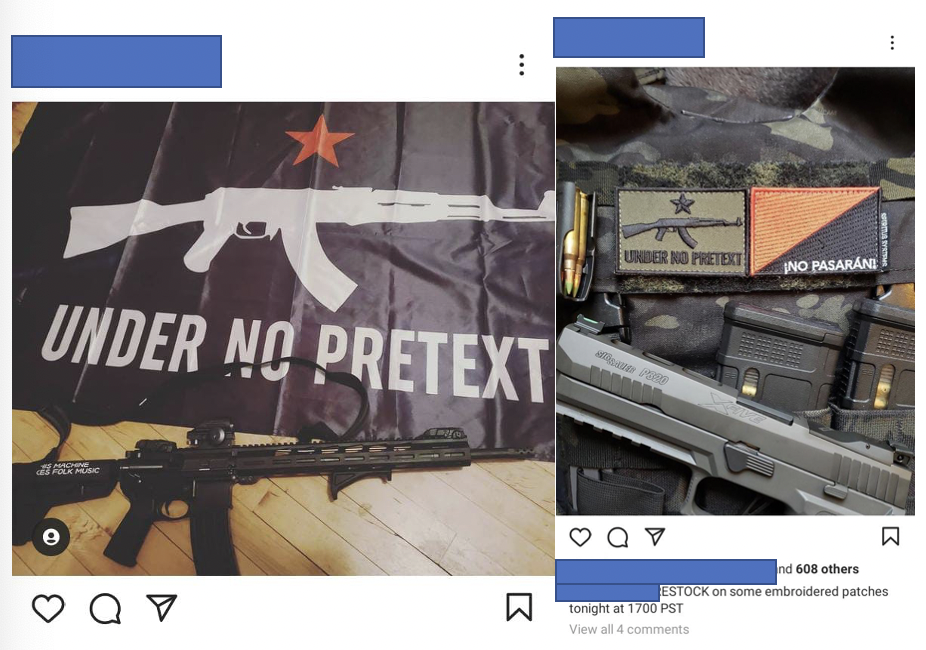 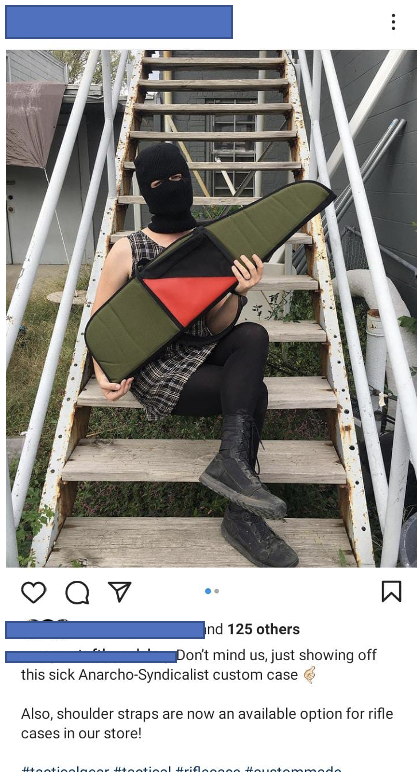 It is important to stress that the threat from left-wing violence remains low. However, recent instances of armed left-wing activity and shootings at protests demonstrate that understanding their interactions with the far-right threat is important. While armed left-wing activists are not a new phenomenon, the rapid growth of Left-wing Gunstagram shows a small but thriving left-wing gun culture is emerging and reflects a response to growing far-right violence as well as a distrust in the state.

Core narratives and grievances identified in this emerging community include a desire for protection from the far-right, the need for a community defence approach towards security and the construction of a safe and inclusive space for left-wing activists and minorities to train within a predominantly right-wing gun culture. While much of the content is targeted at those new to guns, there is also a growing emphasis on more advanced tactical level training.

Joshua Farrell-Molloy was previously a Research Intern in ISD’s Europe and Five Eyes team. He is currently studying for a Masters in Security, Intelligence and Strategic Studies at the University of Glasgow.