The war in Ukraine is entering a new phase. As Russia refocuses its efforts on ‘liberating’ eastern Ukraine and its soldiers retreat from other parts of the country, its disinformation machine is pivoting to disseminate lies disputing its forces were responsible for any violence against civilians throughout the country.

These tactics have already been employed in response to Bucha. And as more atrocities are unfortunately likely to come to light, it’s worth dissecting Russia’s response to Bucha. This Dispatch explores what to expect in the likely case of further Kremlin denials, diversion and deflections in the weeks and months ahead.

It’s not easy to spot Iryna Filkina at first. Emerging from the bottom of the frame pushing a bicycle down a street, she was captured on drone video footage taken in early March in the Ukrainian town of Bucha, while the area was under the control of Russian forces. Then, just as she turned left around a corner, plumes of white smoke rose from waiting armoured military vehicles pointed in her direction, indicating they had just opened fire.

Bucha, a suburb of Kyiv, was occupied by Russian forces for a month. At the end of March, after the liberation of Bucha, Filkina’s body and her bicycle were again captured in subsequent photos taken at the same location, Yablunska Street. Russian denials followed. Since the beginning of April, images and reports from Bucha, have uncovered sites of unimaginable devastation, unlawful murder and evidence of cruel brutality enacted upon its residents. Bodies are still being discovered and evidence of suspected Russian war crimes is growing.

Russia’s response to events in Bucha points to a broader pattern best described as: deny, dispute and deflect. We’ve seen this communication strategy before Bucha  and we’ve seen it after Bucha. So let’s explore these responses further.

On 4 April, Russia’s Foreign Minister Sergei Lavrov said the discovery of bodies in Bucha was a “provocation” orchestrated by Ukraine. He claimed it was intended to “torpedo the ongoing negotiations” with Russia. Other government officials, including the Russian deputy ambassador to the UN Dmitry Polyanskiy, have amplified claims from pro-Kremlin blogs and social media users that alleged “manipulated” content was being used in reports from Bucha by news organisations like the New York Times.

Russia’s Ambassador to the UK Andrey Kelin claimed that the “Bucha provocation was well planned”, further suggesting that the BBC’s reporting from Ukraine was influenced by “new government funding”. The embassy was one of many to flood online spaces with information that denies Russian links to Bucha. 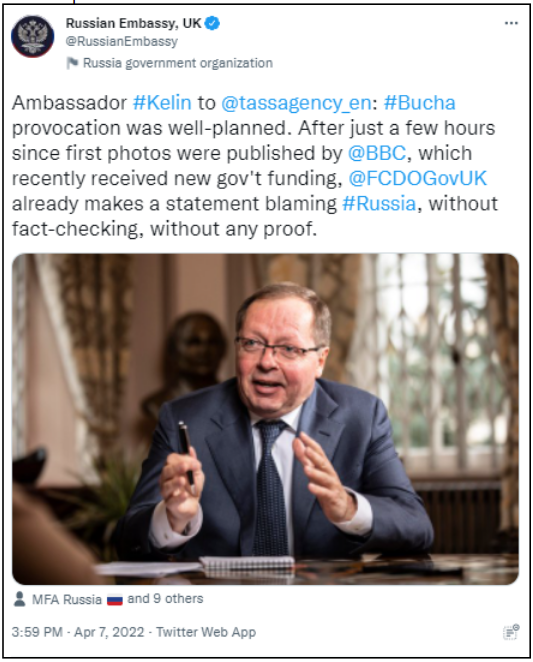 Russia regularly uses the verified social media accounts of its international embassies to seed disinformation and avoid content removals from platforms. Previous ISD research has shown that posts by Russian embassy social media accounts, and engagement with them, has increased since the beginning of the invasion.

This activity has not been isolated to Twitter. An ISD study of Facebook posts across 20 countries found that three weeks after the Bucha massacre, the most shared Facebook posts about the events were the ones questioning it. Posts from local Russian Embassies in multiple countries, including Cyprus and Greece, were found to be among the top ten most shared posts about Bucha.

Many bloggers and non-state actors have also aided the disinformation efforts of the Kremlin. They have claimed that it was, in fact, Ukrainian forces that carried out the killings in the days between Russian forces withdrawing from Bucha and the first news reports documenting widespread murder. Pro-Kremlin narratives allege Ukraine carried out this covert or ‘false flag’ act to fuel anger towards Russia and secure more weapons from the West.

Testimony from Bucha residents explaining when, where and how Russian soldiers killed their loved ones throughout March, as well as satellite imagery capturing bodies on the streets pre-withdrawal, unequivocally disprove pro-Kremlin disinformation. However, it is unlikely that these accounts and images will convince hardened pro-Kremlin conspiracists to change their mind.

In the immediate aftermath of an incident, or upon it first being reported publicly, Russia simply ignores the facts. Instead, they target activists, journalists and the media, usually by claiming they are working on behalf of a Western government, organisations like NATO or the CIA, or are beholden to some other sinister force who wish to portray Russia as the aggressor. Russia’s approach will often target the credibility of reports about an incident, claiming satellite imagery or videos from the ground are poor quality. Otherwise, they attempt to scrutinise the timeline of events detailed in reporting, as we’ve seen after Bucha.

Generally, when evidence of crimes can’t be ignored, we see Russia seek to pass culpability onto others by alleging another party was responsible for the act of brutality which has captured the world’s attention. Or most desperately, as we have also seen after Bucha, Russia reaches into the depths of delusion and produces claims that victims captured in the footage after an attack are actually alive, pretending to be dead for the sake of propaganda, and operating as “crisis actors” in a “staged” set up.

As you might imagine, such claims are disorientating and contradictions among Russia’s own comments are common. This has occurred with Bucha, and the same approach will likely be applied to future discoveries of atrocities. These tactics and narratives from Russia are recurring components of its disinformation apparatus.

If this approach is common, then what is the goal here? Absurd denials and conspiracies used to dispute Russia’s culpability are opportunistically plucked from social media and, in most cases, aren’t all that convincing. But they aren’t supposed to be. Nor do they need to be consistent, whether they come from government figures, state-backed media or pro-Kremlin voices online.

Like any disinformation narrative, the goal is to shift public opinion, but not towards a reality where everything neatly makes sense from a Russian perspective. Instead, the aim is mass confusion: to obscure and obfuscate the facts, to throw enough things at the wall in the hope that something sticks and people are sufficiently unsure and sceptical about the details around an incident, handing the Kremlin a veneer of deniability. At its core, it’s about making people throw up their hands and admit that maybe we just can’t know what the truth is at all.

We know all of this because we’ve been here before. The first week of April marked a set of sad anniversaries. It had been five years since Khan Sheikhoun and four years since Douma, two incidents in Syria in which the regime of Bashar al-Assad, aided and supported by Russian defence and intelligence, used chemical weapons against its own citizens. The response from Russia in both cases was again the same: deny, dispute and deflect.

When flight MH17 was shot down with a Buk missile over pro-Russian separatist-controlled eastern Ukraine in July 2014, an investigation found that employees with Russia’s Internet Research Agency ‘troll farm’ spent three days posting over 100,000 tweets. First they claimed pro-Russian rebels had successfully targeted an enemy Ukrainian jet, before shifting the blame to claim Ukraine had shot down the passenger plane. Other similar cases include the Kremlin disputing the facts surrounding the poisonings of Sergei and Yulia Skripal or imprisoned Russian opposition politician Alexei Navalny.

The Kremlin’s response to the atrocities in Bucha show us how little has changed in in their communication strategies. Their playbook remains the same today. If or when evidence emerges of further atrocities, we must continue to record and track Russian efforts to distort and dispute the facts through muddying the waters with disinformation. 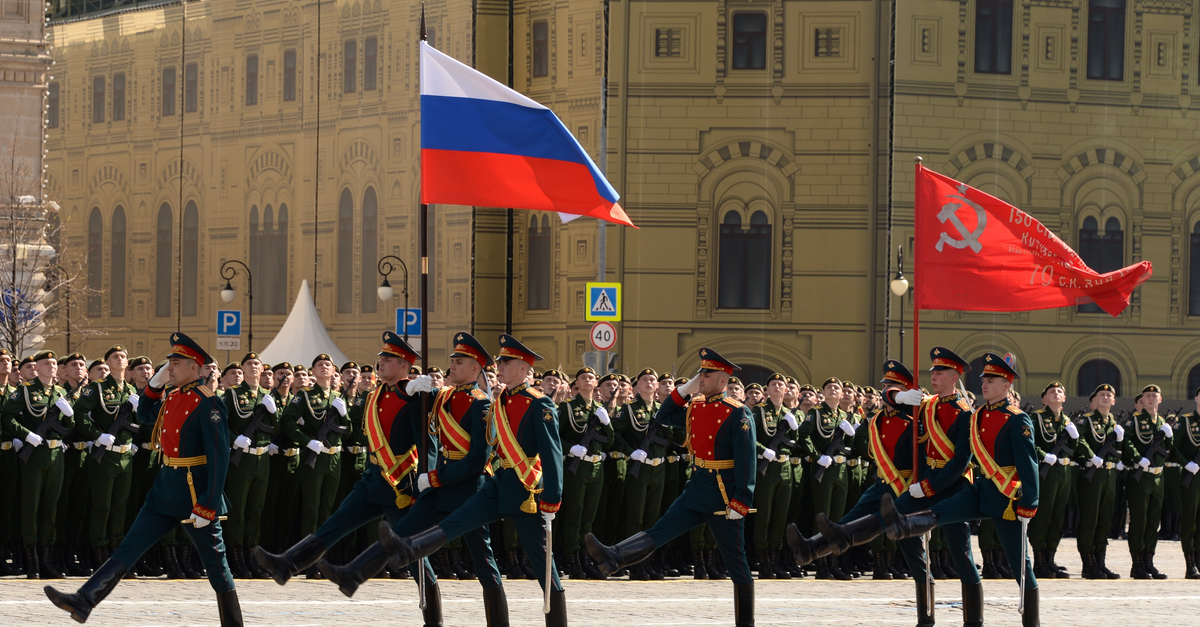 In this Dispatch, ISD analysts explore Kremlin propaganda narratives about Victory Day on Facebook in 11 different languages and countries. 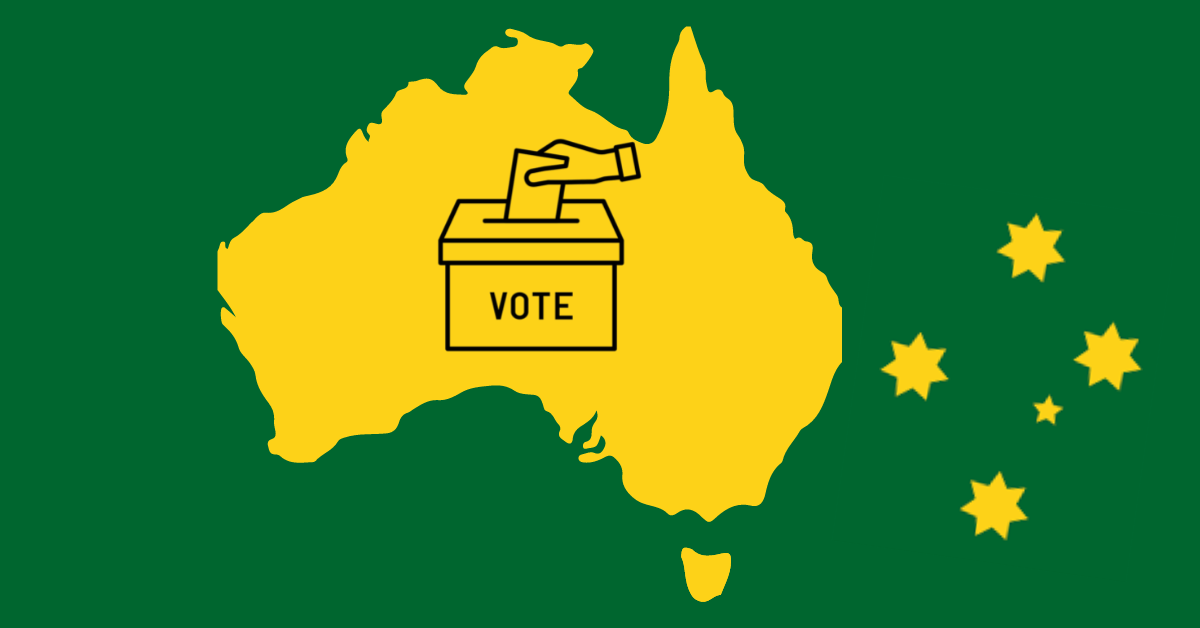 In this Dispatch, we analyse how candidates in the 2022 Australian elections have made reference to the World Economic Forum and the 'Great Reset' on Facebook and Twitter. 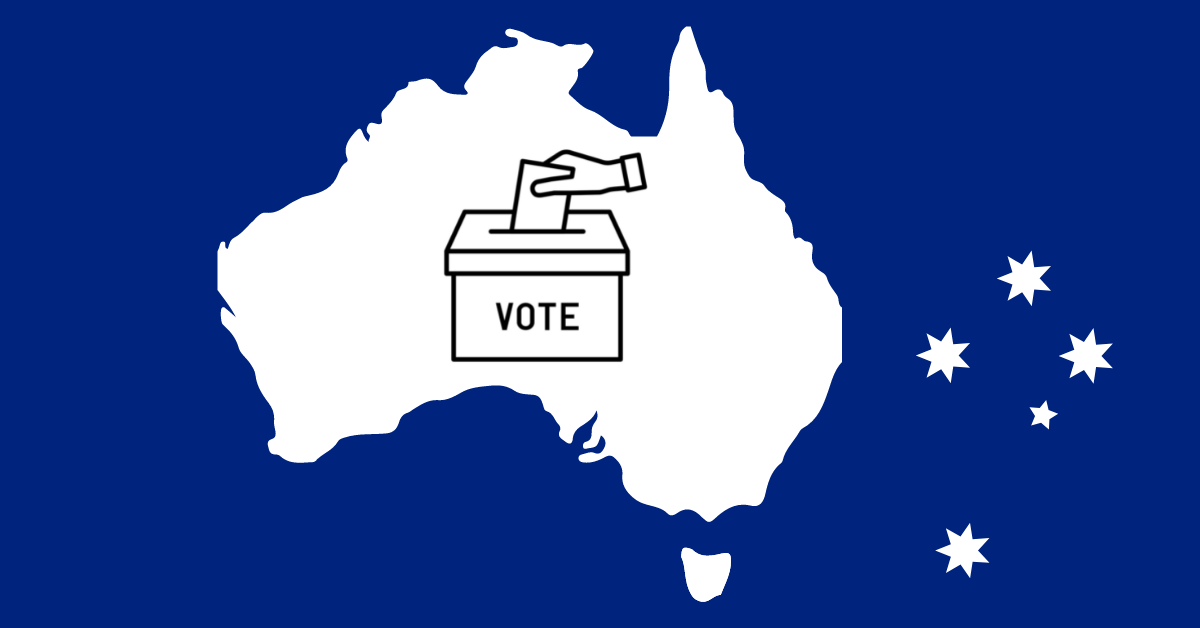 The ‘Great Reset’ Conspiracy in Australia

This Dispatch is the first of two about World Economic Forum and 'Great Reset' conspiracy theories being spread by various actors during the 2022 Australian federal elections.