Amid concerns about the rapidly growing overlap between Russian propaganda and Western conspiracy communities’ narratives related to the war in Ukraine, many are likely to focus on the potential role of state-linked covert influence operations.

However, while it is possible – and even likely – that covert state-linked efforts are taking place, analysts should not overlook another more obvious factor: many Western conspiracy theorists get their “news” about events in Ukraine directly from Russian state media.

Over the course of the pandemic, Russian state media outlets – particularly Russia Today (RT) – cultivated an audience amongst Western anti-vaccine and anti-lockdown communities.

While RT’s Russian-language coverage of the pandemic supported vaccines and endorsed COVID-19 restrictions, their English-language coverage aired vaccine-sceptic views and decried lockdown ‘authoritarianism’. And in the context of the 2020 US Presidential election, Russian state media amplified claims of electoral fraud, playing into culture war debates in the US and ingratiating themselves with pro-Trump conspiracy groups.

Russian state media content is widely shared across conspiracy theory communities on social media. Since 2020, many conspiracy groups have shifted from mainstream platforms to Telegram, which has given Russian media a further boost over other sources of news. While most Western media outlets are not active on Telegram, the majority of Russian media outlets have a strong presence on the platform, making their content readily accessible to conspiracy groups on the platform, and easier to share.

With this in mind, while there may be covert state-linked efforts to influence Western conspiracy groups, these efforts would seem increasingly redundant. There is now a direct, established pipeline from Russian state media to high profile Western conspiracy influencers, who will promote pro-Kremlin propaganda on their behalf – and at no cost to them. Why do the work yourself when someone else will do it for free?

One example of this occurred earlier in the week when the Russian government claimed to have acquired and published documents proving that the US had been developing biological weapons in Ukraine. This claim gestured towards the revivified ‘Ukrainian biolabs’ conspiracy theory, which has been amplified by both Russian state media and by conspiracy theory groups. Within hours these documents were being widely shared into Western COVID-19 and anti-vaccination conspiracy groups on Telegram from a range of sources. These sources included various RT channels (RT is currently using a number of ‘mirror’ channels on Telegram to evade a ban in Europe) and screenshots from Ria Novosti (another Russian state media outlet), as well as high profile QAnon influencers such as Jordan Sather. 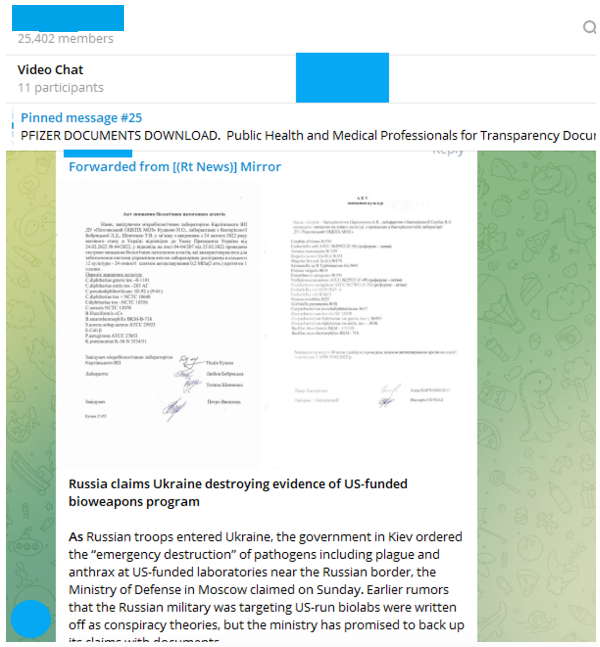 Image 1: Documents shared by RT into a Western conspiracy channel on Telegram.

How Russian state propaganda is being received by conspiracy groups

While covert state-linked influence efforts cannot be ruled out, much of this activity appears to be authentic. Effective propaganda works if it makes people want to believe and share it, and the Russian state has a long history of skillful exploitation of conspiracy theories.

Exposure to Russian state propaganda is now having a profound impact on how members of Western conspiracy theory communities are perceiving the conflict in Ukraine. The assertion that Ukraine is a country ruled by Nazis, and that Russia’s invasion of Ukraine was both justified and necessary, is now being uncritically repeated by large swathes of Telegram users in these groups.

For example, in an a poll posted on 5 March by QAnon influencer Inevitable ET, 97% (of over 29,000 respondents) voted that Ukrainian “neo Nazis” were in the wrong for “hiding” behind civilians, rather than Russia being in the wrong for bombing civilian targets. This is undoubtedly connected to the Russian state media claim that Ukrainians are using civilians as human shields, which has been shared across conspiracy channels on Telegram. 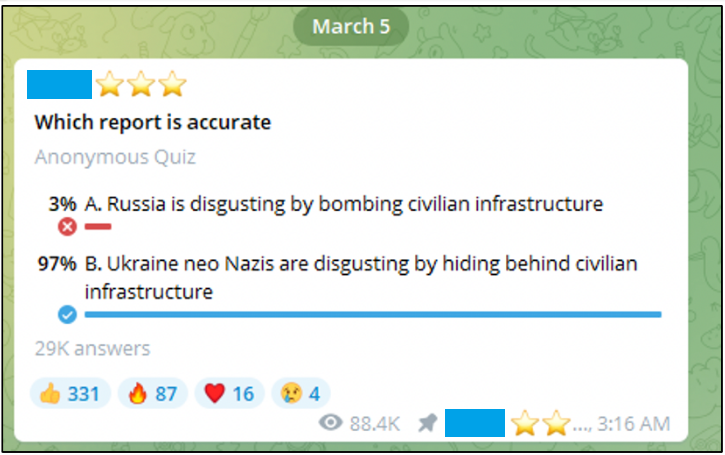 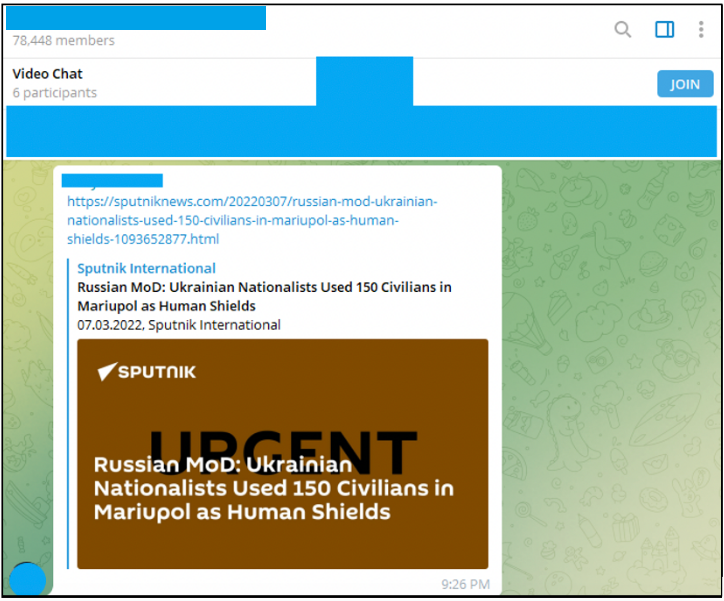 Image 3: Russian state media claim that Ukrainians are using civilians as human shields shared onto a conspiracy channel on Telegram. 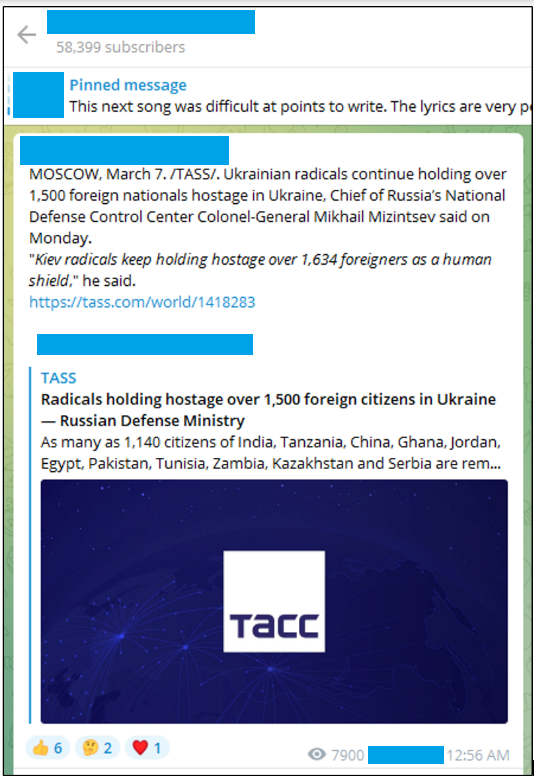 The crackdown on Russian state media has fed into conspiracy narratives

Efforts to contain the impacts of pro-Kremlin propaganda are picking up steam around the world. Russian state media outlets have now been theoretically banned across multiple major social media platforms (although they appear to be finding ways to continue to post), and widespread sanctions against Russian entities are undermining their ability to pay for advertising or to conduct business as normal internationally.

However, an unfortunate but predictable side effect of the crackdown on Russian state media has been the increase of its appeal to conspiracy groups, who interpret it as a sign that sinister elites are seeking to conceal the truth. RT’s move from YouTube to fringe video platform Odysee, which is home to a range of conspiracy and right-wing extremist actors who have been banned from other platforms, is likely to further consolidate its viewership among conspiracy communities. 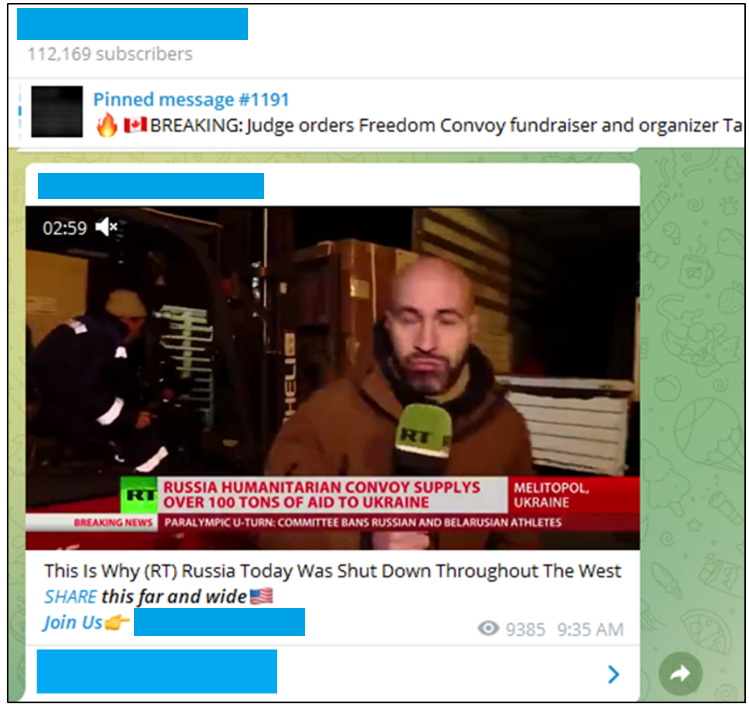 Image 5: A post in a conspiracy channel containing a video titled: “This Is Why (RT) Russia Today Was Shut Down Throughout The West SHARE this far and wide 🇺🇸”.

While the net effect of the moves against Russian state media outlets is likely to reduce their reach among mainstream audiences in many parts of the world, it may also strengthen and deepen their reach into fringe audiences.

Pushing Russian state media underground with an established pipeline into the Western conspiracy ecosystem is likely to mean that pro-Kremlin propaganda narratives and claims will continue to be laundered into Western fringe media outlets, and repeated by conspiracy influencers and fringe pundits.

The provenance of these pro-Kremlin narratives will become more difficult to trace, but not necessarily less influential amongst fringe and conspiracy communities.

It is possible and even likely that there are covert state-linked efforts underway seeking to exploit the frustrations and paranoia of conspiracy theory communities, and to sway them to Russia’s narratives about the war in Ukraine.

As Western democracies seek to confront the threat which Russia now poses, the hold that pro-Kremlin propaganda has developed over these groups will present them with a significant challenge.