On 30 July Australian Prime Minister, Anthony Albanese, unveiled the draft wording for an amendment to the Australian Constitution. The amendment would enshrine a body called the Aboriginal and Torres Strait Islander Voice, which “may make representations to Parliament and the Executive government on matters relating to Aboriginal and Torres Strait Islander Peoples.” The amendment is expected to go to the vote in a referendum sometime in 2023 or 2024.

This is a complex issue with high stakes, deserving of a nuanced, informed and respectful national conversation. Unfortunately, however, before the date has even been announced, it is becoming clear that the lead-up to the vote is likely to be riddled with mis- and disinformation, hate speech and racist conspiracy theories.

The referendum is the culmination of more than a decade of deliberations by successive governments and Indigenous community leaders about whether, and how, to change the constitution to recognise Indigenous Australians.

In Australia, the constitution can only be changed through a referendum, which requires a double majority (both a national majority of all voters across the country and a majority of voters in at least four of the six states) to pass. This is not easy to achieve. Of the 44 national referendums in Australia’s history, only eight have passed.

A major challenge facing supporters of the Voice is the information vacuum, which currently exists around what exactly a ‘Voice to Parliament’ means in practice. Although potential models have been suggested, no final model has yet been agreed upon. Almost all details about the Voice – who would be on it, what its role and powers would be, how it would consult with Indigenous communities and how it would work with the parliament – remain unknown as of early September 2022.

Initially, the government had adopted a deliberate strategy of not providing a detailed model for the Voice before the referendum. They aimed to avoid replicating the results of the 1999 referendum on whether Australia should become a republic, which at the time was perceived to have been lost due to providing too much detail. The government has since backtracked and now plans to debate the details in parliament prior to the vote.

While polling reflects majority support for a Voice to Parliament, it also reflects widespread confusion and lack of knowledge about what the Voice actually is, or would be.

As the experience of the COVID-19 pandemic has shown us, when there is an information vacuum around a highly contentious issue, misinformation and conspiracy theories quickly rush to fill the void. The lack of firm facts about the composition and powers of the Voice has allowed its opponents to project baseless scare tactics which are not grounded in reality.

Some of the wild narratives already in circulation claim that the Voice is part of an Aboriginal plot to take control over huge swathes of Australia, including seizing private land and homes and forcing non-Indigenous Australians to pay rent to traditional owners. Others state that the Voice is part of a plot led by the United Nations, George Soros, the New World Order, the World Economic Forum, Marxists, Communists or shadowy Jewish puppet masters to smuggle other changes into the constitution. Another affirms that the Voice will transform Australia into an apartheid state or even lead to the breakup of the entire country. 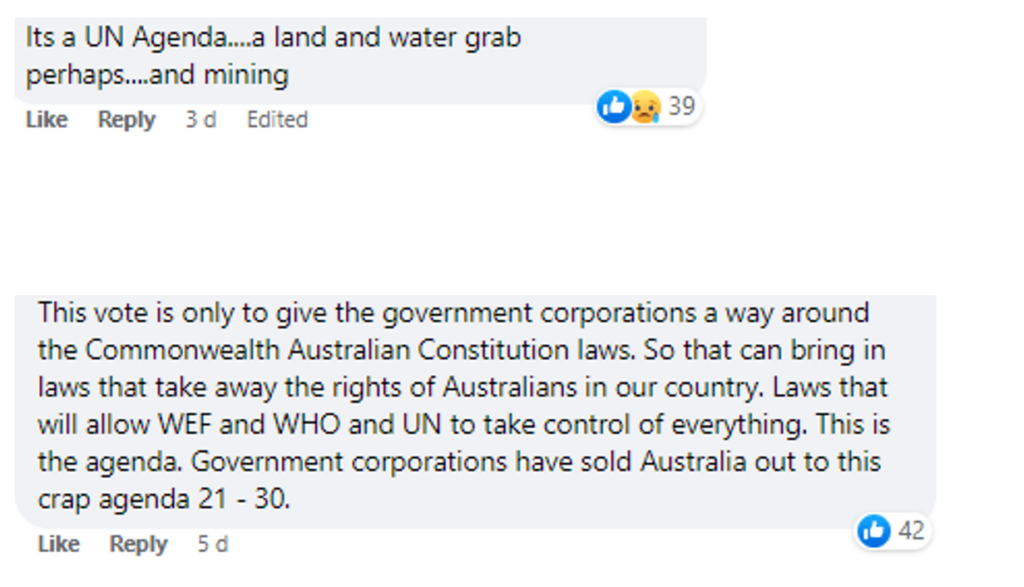 Screenshots of example Facebook comments repeating conspiracy theories about the Voice to Parliament as part of a plot by the UN, WHO, the World Economic Forum and others.

These bizarre claims are coming from a number of sources. Some networks, which formed around COVID-19 conspiracy theories and anti-lockdown protests, appear likely to pivot towards mobilising against the Voice, particularly as their anti-lockdown activism becomes increasingly irrelevant and can no longer draw attention or money.

Far-right and white nationalist Telegram channels and groups are already engaging in the online conversation around the Voice, and this seems only likely to increase as the vote draws nearer. On the flipside, Aboriginal Sovereign Citizen conspiracy theorists and their supporters are also spreading conspiracy theories about constitutional recognition and native title, the recognition by the law of Aboriginal and Torres Strait Islander people’s traditional rights and interests in land and waters held under traditional law and custom.

Irresponsible, inaccurate claims aired by parts of the Australian mainstream media and some politicians are likely to inflame the situation. Pauline Hanson’s One Nation Party, for example, has put out a press release claiming that the Voice would “impose apartheid on the Australian people.”

Sky News has aired multiple segments of ‘The Bolt Report’ claiming that the Voice will lead to apartheid, and even broadcasted an interview with controversial writer Keith Windschuttle (whose research in his self-published book series denying that a genocide against Aboriginal people took place in Tasmania, has been repeatedly criticised, including an entire book of essays rejecting and rebutting his claims) claiming that the Voice could lead to the break-up of Australia.

Amplifying these kinds of inflammatory fantasies does a disservice to the Australian people. The public deserves and requires a thoughtful, nuanced and fact-based conversation about the choice they face in the ballot box.

Those on both sides of the debate have a responsibility to protect the integrity of that conversation, including fighting disinformation and conspiracy theories by keeping their arguments grounded in reality, and avoiding overwrought claims and racist dog whistling.

The social media companies also have a role to play in preventing the amplification of disinformation and conspiracy theories across their platforms and in ensuring their existing hate speech moderation policies are actively applied.

The Voice referendum will be a significant moment in Australian history. Win or lose, the ramifications of the Australian people’s decision will be with us for many years to come. It is critically important that their choice is based on sound knowledge of the facts, and not shaped by falsehoods and conspiracy theories.