By Aoife Gallagher and Clara Martiny

From mid-October, news reports across the world began to describe surging cases of respiratory syncytial virus, or RSV, a common seasonal respiratory illness that most children are infected with before the age of two. For the most part, RSV is a mild illness, but for some babies, young children, and elderly people, it can lead to serious infection and hospital admission. In a very small number of cases, RSV can kill.

There are a number of theories as to why RSV cases are unusually high this season. Research suggests that the seasonality of RSV has changed since the COVID-19 pandemic, with outbreaks taking place earlier in the year. This is likely because of the use of masks and social distancing during 2020 and 2021, which would have limited the spread of the virus. Once these precautions were abandoned, the virus resurged. The reduced spread of RSV in previous years also means that Some people have pointed to an explanation known as ‘immunity debt’ to claim that lockdowns weakened immune systems, although many have highlighted a lack of evidence for this hypothesis and said it goes against the fundamentals of how our immune systems work. Others are examining whether COVID-19 infections may have damaged children’s immune systems, putting them at higher risk of serious infection.

This surge in RSV infections, coupled with rising cases of flu and COVID-19 (being dubbed in some quarters as a ‘tripledemic’) has led to pediatric hospital units being stretched to their limit in a number of countries including the US, the UK and Germany, putting the lives of children at risk.

Figure 1. The highest engaged tweet mentioning RSV between October 15-22 from a healthcare worker sounding the alarm on rising infections (Source)

As healthcare workers attempted to sound the alarm and warn people about the risks, online communities that had dedicated themselves to spreading false information about COVID-19 and vaccines turned their attention to RSV, making the dissemination of accurate information even more difficult. Nowhere is this more apparent than in conversation about RSV taking place on Twitter.

Figure 2: The volume of tweets mentioning RSV on Twitter between October and December, 2022 (Source: Brandwatch)

Discussions about the virus began to increase on Twitter in mid-October as news reports emerged of surging infections. An analysis of the most-engaged tweets about RSV between October 12 and November 12 found that in the first three weeks (October 12 – November 5) the top ten most engaged tweets were primarily from healthcare workers describing the worsening conditions in hospitals and fears of the consequences of a lack of pediatric beds (see figure 1). During the week of November 5 – November 12, this conversation changed dramatically. Eight of the top ten tweets that week disseminated some kind of false information about RSV.

What misinformation is being peddled about RSV?

This misinformation often centered claims that COVID-19 vaccines are responsible for the RSV surge. One of the most consistent claims being spread was that the COVID-19 vaccines were to blame for the RSV surge. This claim stemmed in large part from a segment on The Highwire, an anti-vaccine and science denial website founded by Del Bigtree, a prominent anti-vaccine campaigner and producer of the propaganda film Vaxxed.

In the segment, Bigtree and his guest use the common science denial tactic of cherry picking to point the finger at COVID-19 vaccines for rising RSV infections. Using FDA documents discussing the results of clinical trials for the Moderna and Pfizer vaccines in children, they pull out sentences that describe small increases in RSV infections in vaccine groups compared to placebo groups. In both instances, they ignore the parts of the reports concluding the increases seen were not viewed as unusual and were found not to have a causal link to the vaccines. Instead, they falsely concluded that this is evidence of a link between RSV and COVID-19 vaccines. 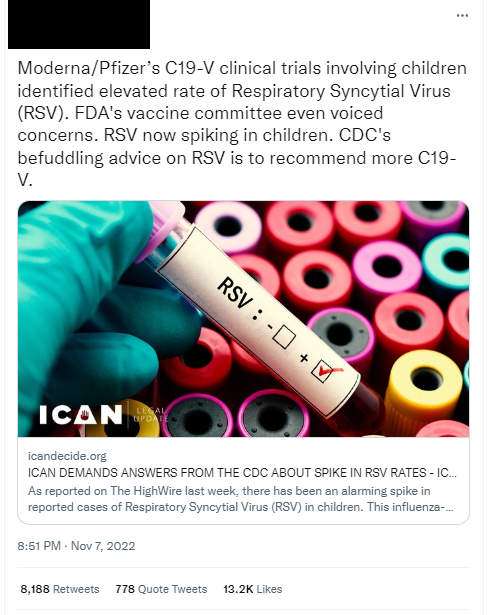 Figure 3. The highest engaged tweet mentioning RSV between October 12 – November 12 stemming from a segment on The Highwire that cherry picks evidence to claim RSV is a result of COVID-19 vaccination (Source)

Another highly engaged tweet that week contained a clip of Leigh Dundas, a lawyer and notorious anti-vaccine activist from Orange County, California. According to the LA Times, Dundas has previously harassed and doxxed health officials over mask mandates and was present in Washington on January 5 and 6, 2021 where she called for the execution of “traitorous Americans”.

The video of Dundas that went viral within RSV discussions featured her addressing the Orange County Board of Supervisors after they declared a health emergency due to surging cases of RSV and other childhood respiratory viruses, which allowed the county to acquire more hospital beds for children. In the video, Dundas compared the board to Adolf Hitler and Nazi Joseph Goebbels (Nazi comparisons are a tactic she has become known for), and downplayed the impact of RSV saying it was “nowhere near an emergency”. She then stated, visually agitated, that she will not accept mask mandates, quarantines or lockdowns, despite the fact that these were not part of the health emergency plan.

Why are vaccines a source of misinformation about RSV?

Another cause for the spike in RSV misinformation during the week of November 5-12 came from the news that a number of RSV vaccines were close to approval. GSK’s vaccine for older adults is expected to be approved by the FDA in May 2023, while a vaccine developed by Pfizer, which will be given to expectant mothers to pass immunity onto their child, has seen very positive results in stage three clinical trials. Others are being developed by Moderna and Johnson and Johnson.

In the past, efforts to create an RSV vaccine have failed (and even led to the death of two infants who were given the shot), but a breakthrough discovery in 2013 breathed fresh life into the possibility of immunization against the virus. Such a development would prevent the level of illness being seen today, and alleviate the pressure on hospitals and healthcare workers across the world.

News of vaccines being developed for RSV did not sit well within the anti-vaccine community, who generally see any new vaccine development as a grave danger. On November 2, UK Column – which, according to NewsGuard, is an anti-establishment ‘news’ site that disinformation about COVID-19 throughout the pandemic – ran a segment claiming children “do not need” an RSV vaccine and that immunizing fetuses in utero was “horrifying.” The guest also discussed how “convenient” it was that vaccines were being developed for RSV at the same time as the media was reporting a surge in infections, implying that it was part of a sinister plan by the pharmaceutical industry.

Twitter users shared clips of the segment, which was eventually picked up in an article by The Gateway Pundit on November 7, further pushing the narrative that RSV vaccines would “kill” unborn children. The Gateway Pundit article also spread these theories to a US audience, where the rhetoric became increasingly extreme. 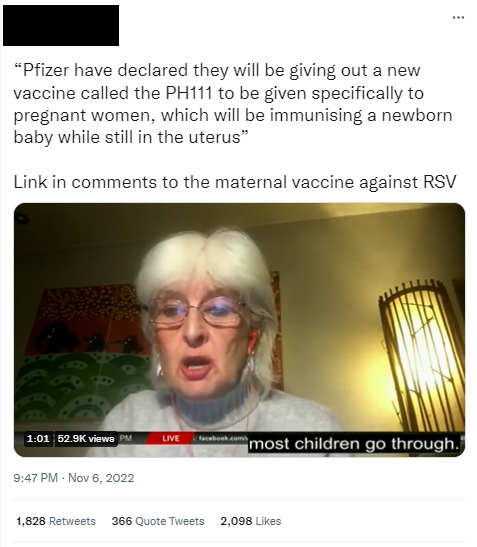 Figure 4. A clip from the UK Column which went viral on Twitter during the week of November 5-12 (Source)

On November 10, conspiracy theorist Stew Peters invited Stella Immanuel, who notoriously claimed hydroxychloroquine could cure COVID-19, onto his show. During the interview, Peters and Immanuel used the news about RSV to push various false claims about vaccines, saying that the government wants “to make sure that the mRNA technology gets into everybody because their whole idea is to monitor the whole of the human race.” Immanuel encouraged viewers to take their chances with diseases such as monkeypox and Ebola, saying “if you have to die, give your life to Christ… do not get genetically modified.” Peters, who recently released an the people involved in “inventing, manufacturing or coercion” of vaccines should be “immediately arrested, indicted, tried and if convicted, they would be fried – publicly executed.”

The UK Column clip (from figure 4) was later featured in a November 12 segment of Good Morning CHD, the Children’s Health Defense’s daily news show. The CHD segment featured Judy Mikovits, the virologist who made false and misleading claims about COVID-19 in the viral Plandemic video in May of 2020. In the CHD segment, Mikovits urged viewers to take ivermectin for cold-like symptoms, and hydroxychloroquine to treat not only COVID but also “any other RNA virus, the common cold, Zika, Ebola.” Mikovits also claimed a vaccine would destroy “the immune system of the infant before they are born.”

The UK Column, Stew Peters, and Good Morning CHD segments all aired around the aforementioned November 5–12 time frame, correlating with the spike in RSV-related misinformation and coalescing around mainstream media reports of RSV vaccine development.

The discourse around RSV and related vaccines is the latest in a somewhat predictable trajectory for communities that have become engrossed in science denial, COVID-skepticism and anti-vaccine rhetoric since 2020. In 2022 alone, these groups and individuals have turned their attention to spreading false information about monkeypox, polio and RSV, with Strep A .

Many involved in these communities have embraced a conspiratorial worldview, which is defined by Professor of Political Science Michael Barkun as having three main components – the belief that everything is connected, that nothing is as it seems, and that nothing happens by accident. This leaves followers of these theories open to alternative explanations for what happens in the world and encourages them to see sinister connections where they don’t exist, such as viewing the surge in RSV cases and media reporting about RSV vaccines as proof of an ominous plot.

These viral narratives are often repeated and recycled, borrowing elements from the claims that circulated about the COVID-19 pandemic, or anti-vaccine rhetoric that has circulated for years. The core tenets of science denial are usually present – the use of cherry picking, the demand of impossible standards (such as proving that vaccines are 100% safe), the presence of bad experts (such as Judy Mikovits or Stella Immanuel), and of course the use of conspiracy theories to give their claims an enticing narrative.

These conspiracy theories and pieces of disinformation have been allowed to spread virtually unchecked on mainstream social media platforms, usually originating with the same set of actors each time. RSV is certainly not the last virus or disease outbreak that will get wrapped up in this cycle of false online content. It is clear that social media platforms need to dedicate resources to stopping the spread of this kind of information, which can lead to poor medical decisions and real-world harm.