Mainstream social media platforms such as Facebook and Twitter are becoming increasingly active in removing extremist content from their platforms. But what happens when a major figure such as the US President mentions a hate group in a Presidential debate?

On 29 September, live on TV in the first Presidential debate, President Trump told the hate group the Proud Boys to “stand back and stand by.” This gave a significant PR boost to a group that has, since its founding in 2016, seen its presence on the major social media platforms – Facebook,  Instagram, Twitter  and YouTube – gradually diminish.

In July 2020, Facebook removed 358 Facebook accounts and 172 Instagram accounts related to the Proud Boys. Both the group’s founder, Gavin McInnes, and one of its leaders, Enrique Tarrio, were routinely restricted and then subsequently removed from Twitter and Facebook. Payment transaction services such as PayPal no longer support the group’s merchandise website,  while eBay, Amazon and Etsy have also banned Proud Boys-related items from being sold on their sites.

In response, the group has migrated onto alternative platforms, which often have less stringent content moderation rules. Indeed, in some cases, these sites have proved to be a safe space for organisations and individuals removed from mainstream platforms, which could include those removed from channels for promoting and sharing extremist content and hate speech violations.

As such, while the Proud Boys have nurtured a small, active audience on Parler and Telegram, and also have a presence on Gab and BitChute, the group still struggles to reach broader audiences on the larger social media platforms.

While the continued removal of Proud Boys affiliated pages suggests that larger social media platforms have become proficient at recognising and removing them, ISD wanted to research how the President’s remarks affected the Proud Boys’ online presence. To do this, our researchers studied both smaller, alternative platforms as well as discussion on mainstream platforms where the group is banned.

Using Brandwatch, ISD researchers found that between 1 September and 28 September 2020 there were 538,159 posts on Twitter, Reddit and a range of blogs containing hashtags or keywords linked to the Proud Boys (Table 1). These mentions were a combination of non-affiliated accounts showing support, interest, disapproval or simply reporting on the group’s activities. This volume reached its peak on 8 September when a video of Proud Boys members beating a Black Lives Matters protestor was circulated online.

Between 29 September and 5 October, however, ISD identified 4,407,480 posts that contained those same hashtags or keywords, equating to eight times as many posts in just a quarter of the time. This increase illustrates the debate’s macro-level online impact for the group.

Table 1 The Top 6 Sources for posts mentioning one of the hashtags or keywords from Query 1 related to the Proud Boys.

By combining the two queries, ISD identified 21,000 posts on Twitter, Reddit and a range of blogs that referenced the Proud Boys alongside the word ‘Telegram’ between 1 September and 5 October. Less than 10% were posted during the 28 days before the debate and 85% were posted within 48 hours of the debate (Figure 1).

One of the concerns this increased exposure raises is whether it correlates to increased group membership or support: Could content shared by mainstream media or circulating on social media guide people towards isolated echo-chambers that support and embolden hateful organisations such as the Proud Boys?

Figure 1: Graph illustrating volume frequency of posts from Twitter, Reddit and a range of blogs referencing Proud Boys alongside the word ‘Telegram’ from between 1 September to 5 October

On Facebook, ISD identified just 5 posts that mentioned Proud Boys and Telegram between 1 September and 28 September 2020.

However, between 29 September to 5 October, there were 520 posts present on Facebook that mentioned Proud Boys and Telegram, with an interaction figure of 349,981. The post most engaged with was by US Senator and Vice Presidential nominee Kamala Harris, who posted a link to an NBC article that detailed and quoted from the Proud Boy’s Telegram channel.

On 30 September, a US-based researcher tweeted a screenshot of the Proud Boys Telegram account. The image revealed that the group had adopted the ‘Stand Back and Stand By’ Trump quote into their artwork and group slogans. At the time of the screenshot, the Telegram post had received 144 views. In comparison, the Tweet of the screenshot received 11,400 retweets, 9,400 likes and 735 comments. On Facebook, ISD identified 20 posts that included a screenshot of the same researcher’s Tweet, which in turn received a total of 22,500 interactions. By 5 October, the original Telegram post had received 8,000 views. The increased exposure recorded here also highlights an important question of continuing relevance: what responsibilities do journalists and researchers have to not amplify fringe and extreme content into the mainstream?

The increased exposure that the Proud Boys’ Telegram presence and account received on mainstream platforms appeared to coincide with an increase in its Telegram viewing figures, relative to the group’s previous posts. The ten posts on the Proud Boys Telegram account prior to the Presidential debate received an average of 6,200 views each. Following the debate, this increased to an average 8,800 views each, with the highest post receiving nearly twice as many views (12.5k) as any of the group’s previous posts. By the end of 1 October, the viewing figures had dropped down to below pre-debate numbers.

It may be that, in the short-term, online membership of the group was swollen by researchers, journalists and others who were interested but not supportive. However, the longer-term effect on its online membership will only be understood through the continued monitoring of engagement and interaction with the official Proud Boys Telegram account and its affiliated local chapters.

Figure 2: Graph illustrating volume frequency of posts from Twitter, Reddit and a range of blogs referencing Proud Boys alongside the word ‘Parler’ from between 1 September to 5 October

Within this increase were pro-Trump Twitter accounts posting information and images pertaining to the group’s Parler account. On 2 October, one highly active account retweeted a photo of two Proud Boys members posing with Fox News presenter Tucker Carlson. At the time of the Tweet, the photo had received less than 27,000 views on Parler. As of 8 October, this increased to 107,000 views (Figure 3).

Between 1 September and 28 September 2020, ISD identified just two posts on Facebook that referenced the group and on Parler only 9 interactions. Following the Presidential debate, this increased to 70 posts and 17,000 interactions. The majority of the most-interacted posts were from news pages such as Yahoo and Forbes. However the second most interacted post was from a conservative and pro-Trump commentator expressing support for the group. 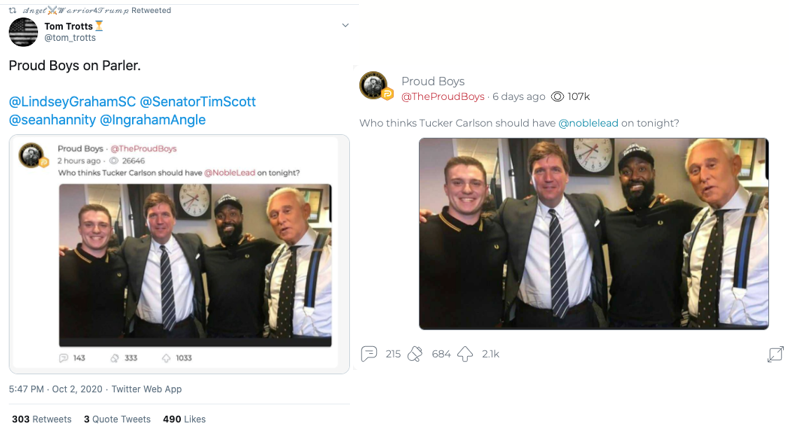 Ultimately, our research found considerable content on mainstream platforms that supported the group and defended it against accusations of racism. It also surfaced content informing users of the alternative social media platforms on which they could find more Proud Boys content. This raises complicated questions about the strategy and effectiveness of content moderation approaches taken to remove dangerous organisations from social media platforms.

The most important of these are whether support for or glorification of those groups should also be prohibited, and how well removal of centralised official assets of organisations stifles their activities and communication on the major platforms. As platforms continue to battle the presence of dangerous, violent and hateful groups on their services ahead of the election, these questions will become even more pertinent.