The internet is the aesthetics laundromat of the far-right. For the best part of a decade, various right-wing extremist factions have attempted to unify disparate groups under a single banner, and push the most extreme narratives from the fringes to the centre – mainstreaming extremism in its most literal sense. To do so, they create attention-grabbing propaganda designed to be amplified by outraged media coverage and social media posts. It has worked time and again.

Now, a small number of news outlets have begun to cover an attempted rebrand of Trumpist and alt-right politics known as ‘Dark MAGA’. This Dispatch explains what Dark MAGA is, what its aims are, and why talking about it – even in some cases to try to explain it – can play into the hands of extremists.

The intention of this piece is not to lend further attention to Dark MAGA, but rather to use it as a case study highlighting how the mainstream media response to extremist propaganda often facilitates its entry to mainstream discourse. In doing so, the piece intends to reiterate the importance of extremely careful media coverage when addressing such topics.

The basic narrative of Dark MAGA, elaborated and dissected best in a GNET article by Hampton Stall and Daniel Grober, is that Trump should return in 2024, but that his first presidency was too ‘soft’. He gave too much leeway to his enemies, and this time needs to harden his heart and “embrace the villain role”. More violence is needed, exemplified by supercut videos of every time Trump said ‘death penalty’ in his speeches.

Dark MAGA, though, is not a good faith, grassroots movement. It is an attempt by a fractured right-wing extremist movement to reunite various factions in a way that the ‘alt-right’ had some success in doing until the disastrous (and murderous) Unite the Right Rally in Charlottesville, Virginia, in 2017.

Dark MAGA combines Trumpist rhetoric with aesthetics more readily associated with neo-Nazi terrorist groups who are part of the Skull Mask network. This is a deliberate attempt to do three things: gain attention, unite the right, and introduce more mainstream Trump-supporting conservatives to much more extreme narratives and ideas. The aesthetics Dark MAGA combines are:

Vaporwave: characterised by synthetic beats, neon-tinted visual artwork and semi-ironic nostalgia for the 1980s and 1990s. 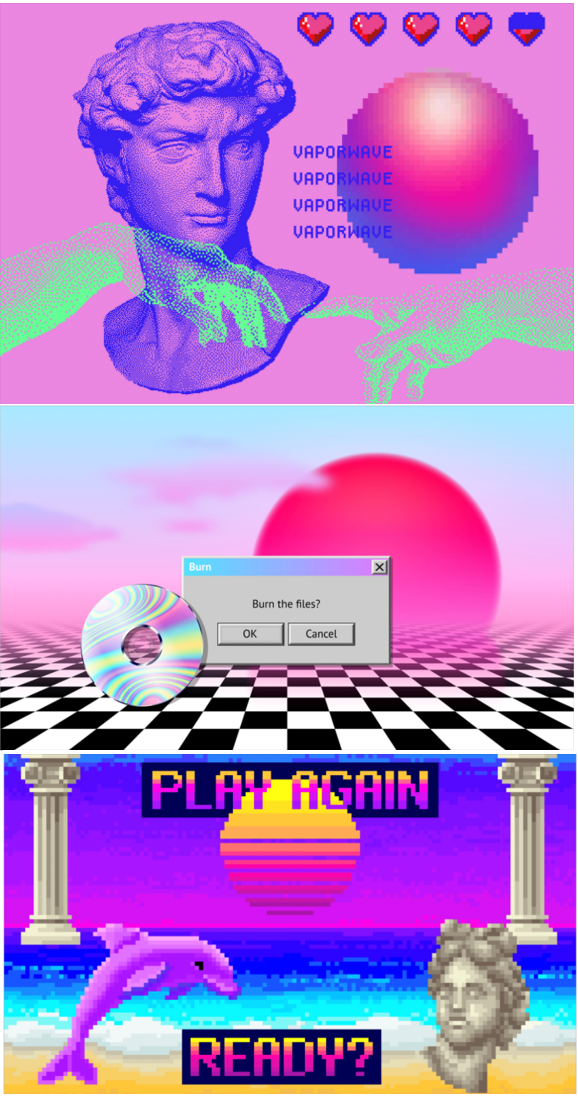 Fashwave: inspired by vaporwave, a music genre and visual style that incorporates neo-Nazi and fascist iconography and narratives into the vaporwave aesthetic.

Skullmask: explicitly neo-Nazi accelerationist propaganda, typified by the work of Dark Foreigner, and mostly incorporating black, red and white along with ‘edgy’ fonts and messaging. Popular amongst the groups that congregated in and emerged from the neo-Nazi Iron March forum, which gave rise to numerous terrorist organisations. 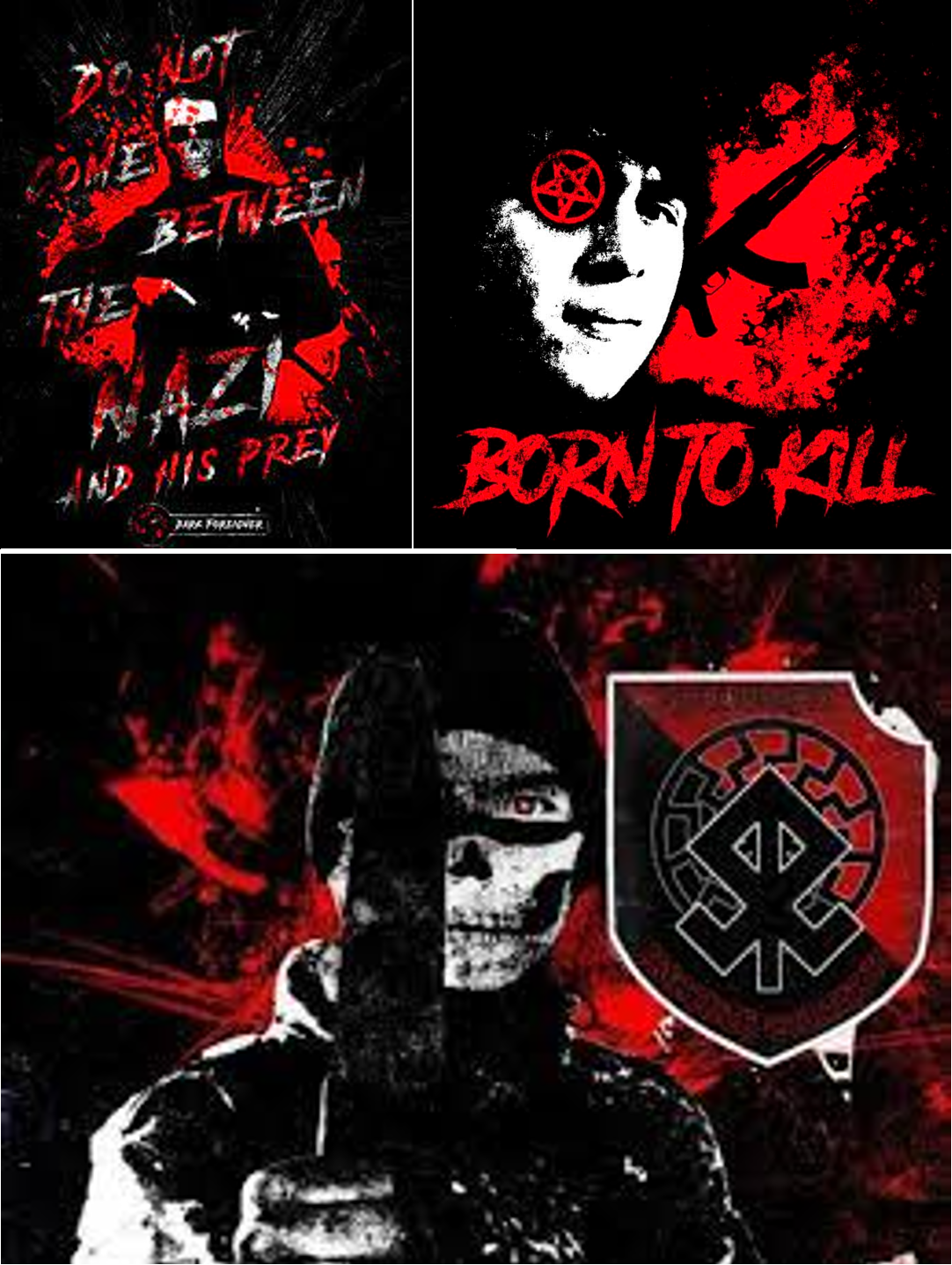 Laser eyes: a trope widespread in meme culture, in which a figure’s eyes are made to glow or appear laser-like, often as an indication that they are growing stronger. Most recently adopted by the crypto community, with Bitcoin holders editing their profile pictures to incorporate laser eyes. 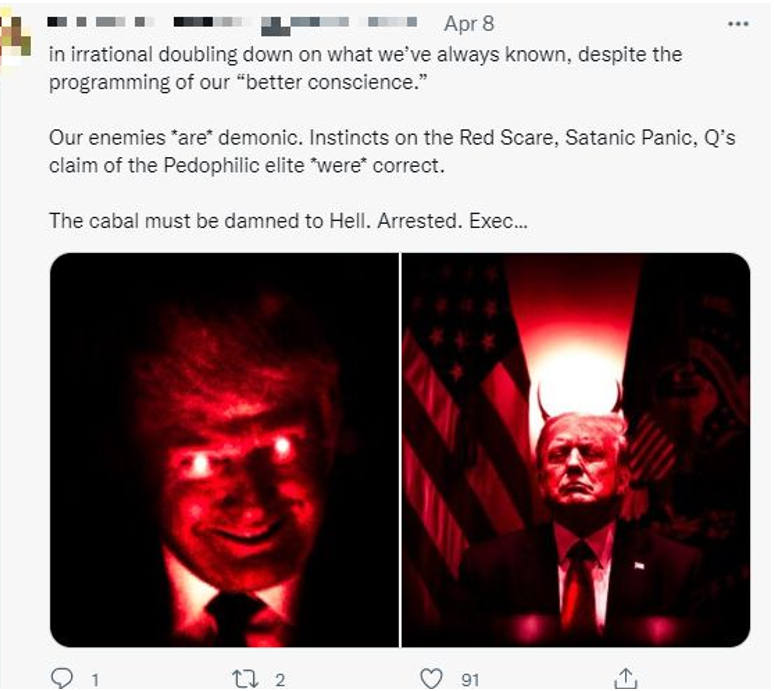 All the above aesthetics are melded with imagery of Donald Trump (and sometimes his family), military parades and equipment, rallies, and other scenes typical of MAGA conservatism.

What is the aim of Dark MAGA?

Many people reading about the latest development in right-wing extremist aesthetics might think little of it or find it laughable – after all, Dark MAGA attempts to make a septuagenarian former President look cool and edgy. The problem with this reaction is that it both writes off the movement as fundamentally unserious – which it is not – and allows for further amplification by journalists and others who cover Dark MAGA as light news.

The first goal of Dark MAGA is to gain attention. In order to achieve its later objectives, it needs to be boosted into the mainstream. The most reliable way to do this is to garner media coverage. Part of the reason that the Dark MAGA aesthetic and narrative are simultaneously extreme and silly, is because this is a tried and tested mechanism for getting that kind of attention.

The goal of those promoting Dark MAGA is partly to unify the disparate alt-right under a new banner, and partly to launder much more sinister and extreme narratives and iconography into the MAGA movement, thus introducing more mainstream conservatives to the ideas, imagery and people who populate white nationalist and accelerationist movements. As Stall and Grober put it, “Neo-Nazi iconography sits squarely next to red MAGA hats and Odinistic depictions of Donald Trump.”

The exposure of wider audiences to these thinkers’ ideas is deeply concerning, particularly given their inspiration of acts of mass violence. James Mason’s SIEGE is the foundational text for Atomwaffen and related neo-Nazi terrorist groups. Bronze Age Pervert appears to have been an influence on the recent Denver mass shooting. George Lincoln Rockwell is idolised by contemporary Nazis, and Julius Evola’s book ‘Revolt Against the Modern World’ is a crucial text in esoteric fascism.

Dark MAGA has been adopted and boosted by some in the right-wing space. Others, particularly on 4chan, have claimed it is an ‘op’. That is, they believe the aim of Dark MAGA is to associate the broader Trump-supporting movement with neo-Nazism and in doing so paint it as dangerous and in need of a crackdown. Alternatively, they say Dark MAGA is so ‘cringe’ that it couldn’t be anything other than a plot to delegitimise extreme right-wing ideas and reinforce the existing political system. Importantly, though, some people will call out nearly all new political movements and aesthetics as ops, especially in spaces where paranoia of false flags, conspiracies and infiltration abounds. Regardless of who is driving Dark MAGA and for what purpose, the fact remains that its amplification will lead to more people introduced to extreme parts of the political spectrum.

Twitter data suggests that the discussion of Dark MAGA peaked on 19 April, coinciding with the publication of a Newsweek article about the phenomenon. While discussion volumes then dropped dramatically, they remained at a higher level than pre-publication, evidencing the impact that even a single mainstream media article can have on the sustained popularity of a concept.

Figure 6: Graph of volume of mentions of Dark MAGA on Twitter over time (including ‘DarkMAGA’, ‘Dark MAGA’ and #DarkMAGA).

If Dark MAGA had not been covered in the mainstream media, it is likely that its presence would have continued to bubble under the surface of the internet, with users in more niche spaces arguing about whether it is an op while producing low quality memes.

Unfortunately, as with many other phenomena associated with right-wing extremism, Dark MAGA has benefited from what Whitney Phillips calls ‘The Oxygen of Amplification’. Journalists and others (for the most part) do not want to propagate extremist ideology, but they do want to expose it to the world, or just garner clicks and views. Unless coverage is extremely careful then these interventions can do more harm than good.

Now it is unlikely that the genie can be put back in the bottle. This is in part due to rising mainstream awareness of the phenomenon – although there is a chance that if coverage had ended after the Newsweek article, Dark MAGA would still have faded into irrelevance.

But the continued relevance of Dark MAGA and its associated aesthetics has been assured by President Joe Biden’s coining of the term ‘Ultra MAGA’, which has been taken up with gusto by a variety of pro-Trump actors. The consequences of Biden’s words are still unfolding.

Tim Squirrell is Head of Communications & Editorial at ISD.