By Christian Schwieter and Nicolás Heyden

Ahead of the 14 March 2021 German state elections in Baden-Württemberg (BaWü) and Rheinland-Pfalz (RLP), ISD analysts examined climate-related discussion on social media. The goal was to interrogate how social media drives climate-related debate during an election period, and to test methodological techniques that could be used to monitor online activity in the lead up to the German Federal Elections later this year.

This article provides a network analysis of  the most prominent clusters of Twitter accounts involved in this discussion. It highlights the structure of online discourses around the BaWü and RLP elections, as well as the varying degrees of polarisation of online conversations. The methodology used is outlined at the end of the article.

How to interpret the network

The following network visualisations display a Twitter-mentions network analysis in the context of the BaWü and RLP elections, whereby each node (circle) represents one user that mentioned, or was mentioned by, another user and each edge (line) represents a connection between two nodes.

On Twitter, a mention is signified by the ‘@’ sign and replies to tweets are also counted as mentions of the original user. For example, if user A posted a tweet and user B replied to this tweet, this would be counted as user B mentioning user A. Put differently, user B replying to user A would create a line sent out by B to A.

The node size corresponds to the number of times this user has been mentioned by others (the in-degree) and the colour of the node represents which user communities – “clusters” – the user belongs to. Clusters were generated by the Leiden algorithm, which assesses which users frequently mention the same users. Applied across the network, the colours represent the different clusters.

The Twitter mention network of climate-related conversation during the BaWü and RLP elections.

Largest clusters and their key members 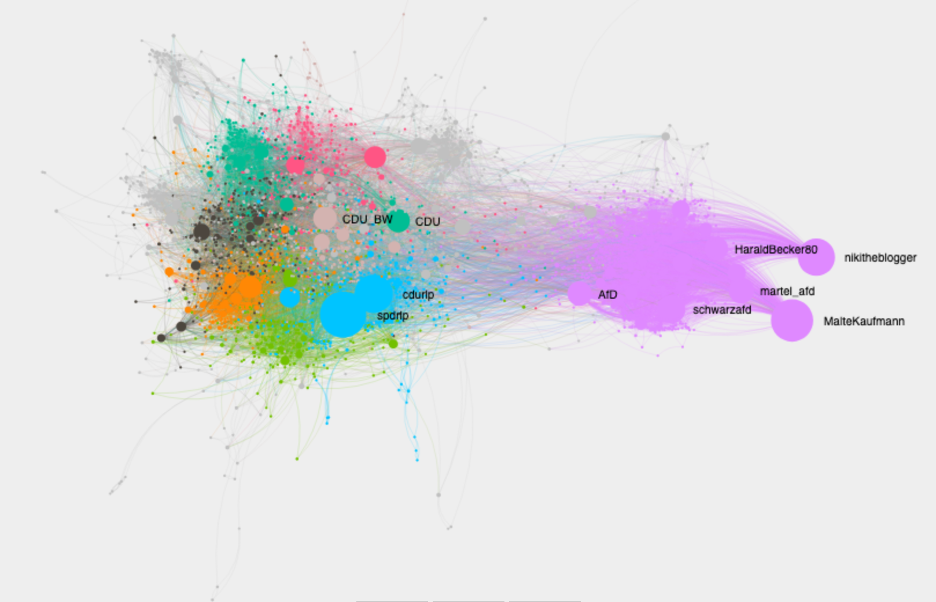 The Twitter mention network of election-related conversation during the BaWü and RLP elections.

Largest clusters and their key members

What does this tell us?

The same most prominent user communities emerge within the climate and the overall election networks. Both are largely split into two camps – one containing AfD or far-right users, and the other all remaining parties/affiliations, including climate activists. This suggests that while AfD-related accounts mostly spoke to eachother, accounts supportive of other parties engaged regularly across partisan lines.

In network terms, the purple AfD cluster is highly homogeneous (meaning accounts in this cluster had a shared political affiliation), while the remaining clusters are much more heterogeneous in terms of their political affiliation. The latter insight may provide tentative evidence that policymakers and civil society are theoretically able to reach a large part of the electorate on climate issues – except AfD supporters.

Two overarching findings emerge from the analysis. The first is that climate-related conversation on Twitter in the context of the BaWü and RLP elections (as measured by mentions) appears more polarised than the overall election conversation. This can be largely attributed to AfD and far-right accounts rarely engaging with the rest of the political spectrum, but also indicates that far-right online communities are hard to reach on climate topics.

The analysis also suggests that a majority of Twitter users (the clusters and accounts to the political left of the AfD) are conversing frequently on climate issues, which should provide hope for policymakers and civil society actors seeking to promote the climate conversation across party lines.

The underlying dataset consists of 61,590 tweets that matched an election keyword list and were posted in the seven days prior to the elections. Out of all of these tweets, 13,058 tweets also matched at least one of our climate keyword list.

Christian Schwieter  is an Analyst at ISD Germany, working across projects in the research and policy division. Christian focuses on the quantitative analysis of online political communication, with an emphasis on the effect of online regulation on far-right actors.

Nicolás Heyden is a Research Associate at ISD Germany where he investigates malign influence activities and online extremism in Europe.