According to Twitter and Meta policies, transgender individuals, together with all members of the LGBTQIA+ community, are a protected group that should be safeguarded from hate speech on their platforms. However, new ISD research has found that these policies are poorly enforced and still suffer from gaps in implementation.

The debate around the inclusion of transgender athletes in sports consistently made headlines in the United States throughout the last year. In January 2021, President Joe Biden signed an executive order aimed at “preventing and combating discrimination on the basis of gender identity and sexual orientation.” Six months later, the participation of the first transgender woman in the Olympic Games was headline news internationally .

Both these milestones for transgender rights  were met with fierce backlash from an array of actors, including politicians in a number of U.S. states who enacted a string of policies that sought to ban transgender girls and women from competing in female sports.

Amid this division, ISD researchers investigated whether social media platforms have taken any steps to protect transgender athletes and the wider transgender community from online hatred by analyzing the narratives and authors that have been dominating the conversation on transgender inclusion in sports. Given the prominence of Twitter and Facebook among English-speaking political communities, these were chosen as the primary platforms for our research.

In 2021, a study published in GLAAD’s Social Media Safety Index (SMSI) found that most social media platforms are “effectively unsafe” for the LGBTQIA+ community, with hate speech and harassment standing out as the most significant problem. A second report released in 2021 by Ultraviolet in collaboration with ISD identified important policy gaps in the protection of the LGBTQIA+ community and the transgender community, in particular on Facebook, Instagram, Twitter, YouTube, TikTok and Reddit.

In November 2018, Twitter also updated its hateful conduct policy to include “targeted misgendering or deadnaming of transgender individuals.” Despite explicitly banning misgendering, Twitter does not provide a clear definition of what constitutes misgendering on the platform.

On the other hand, Meta’s hate speech policy defines hate speech as a direct attack against people on the basis of protected characteristics: “race, ethnicity, national origin, disability, religious affiliation, caste, sexual orientation, sex, gender identity and serious disease.” Its policy, however, does not mention misgendering or deadnaming and only prohibits referring to transgender or non-binary people as “it.”

Figure 1 – Twitter and Meta policies aimed at protecting transgender people from hate speech on their platforms.

In order to identify conversations around the inclusion of transgender people in sports, ISD gathered and analyzed content on Facebook and Twitter from January 1, 2021 to July 1, 2021.

ISD identified posts on public Facebook groups and pages and tweets that included keywords in English related to transgender individuals, as well as keywords connected to sports. This data was collected via Facebook and Twitter’s public APIs using two different tools. On Facebook, all public posts were collected using Beam, a system for gathering and analyzing online discussions. On Twitter, all posts were collected using the social media analytics tool Brandwatch.

This collection identified 66,848 Facebook posts and 1.3M tweets. This data was then filtered to allow for in-depth analysis by restricting each set to the 100 most popular posts (i.e. the Facebook posts with the most shares and the tweets with the most retweets). ISD researchers conducted a qualitative analysis of the most widely shared posts in order to identify:

As such, rather than giving a complete overview of all transphobic speech on public posts on these two social media platforms in the timeframe, this analysis offers a snapshot of hate speech against the transgender community in conversations about transgender athletes and their inclusion in sports. Another important limitation of this research is that the Twitter and Facebook APIs only provide public posts and do not allow the collection of posts that have been deleted and/or removed.

While the overall amount of posts about transgender athletes was greater on Twitter than on Facebook, the trend in volume of overall conversation over time was generally consistent across both platforms. 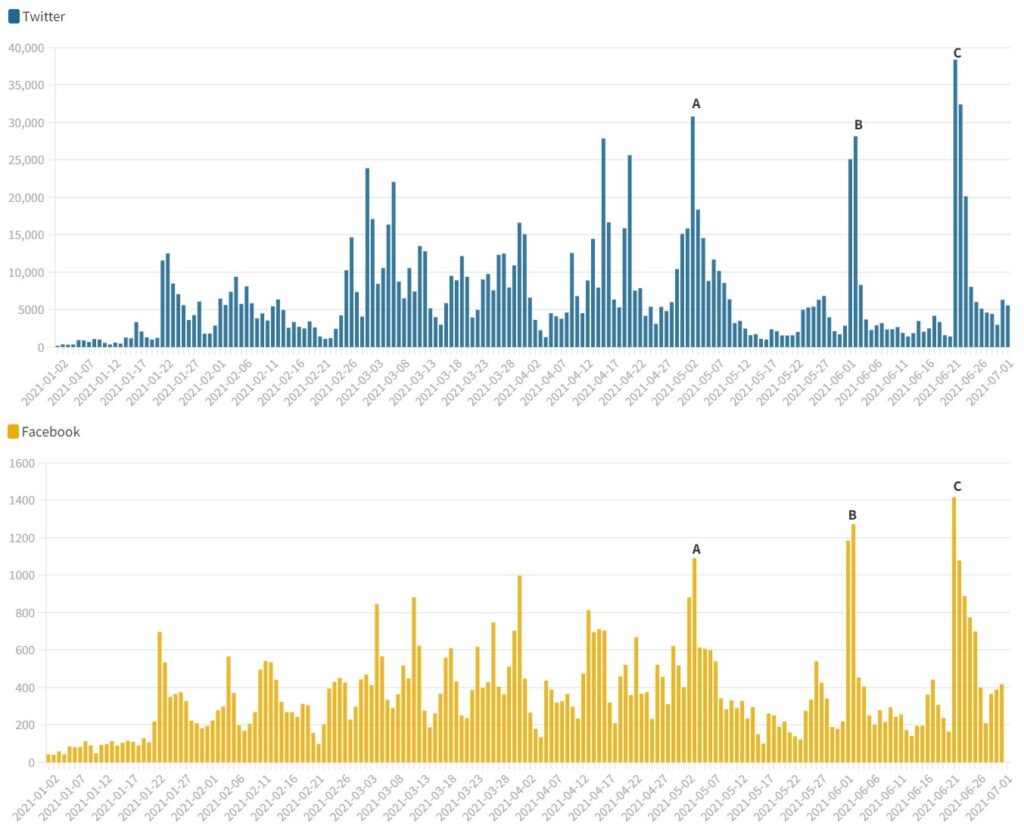 Spikes (labelled ‘A’, ‘B’ and ‘C’ in Figure 2) in the overall discussion of transgender athletes on Facebook and Twitter corresponded with prominent international and domestic developments on the issue. These developments were:

The use of transphobic slurs on the two platforms correlated with these spikes in volume of conversation. In total, we found 56 Facebook posts and 1,572 tweets containing transphobic slurs during the period of analysis (Figure 3).

On Twitter, the peak in use of these slurs corresponded with the announcement of Laurel Hubbard’s participation in the Olympics. On Facebook, the major spike of activity was on January 9, 2021, when a single user posted the same identical post across 16 different Facebook public groups in a 48-hour period.

The post (see Figure 4) claimed that former NFL quarterback and civil rights activist Colin Kaepernick was born female and was brought to the scene to “take the attention off all the Child Pedophilia and Satanic Cult arrests over the past 4 years.” The post, which parrots a conspiracy theory that ties together Big Pharma, Oprah Winfrey, the Deep State, the Vatican, and “Hollywood Transgender Agenda,” includes a transphobic slur to refer to Kaepernick. 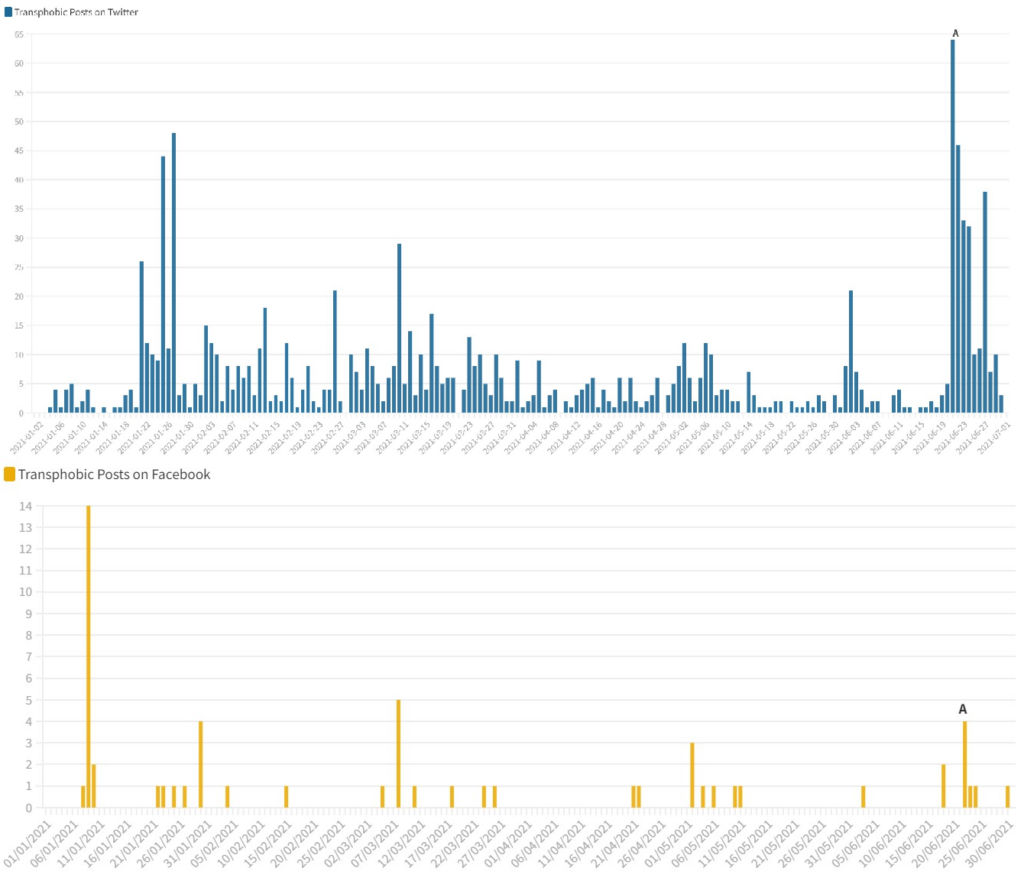 Figure 3 – Volume of transgender slurs between January 1, 2021 to July 1, 2021 on Twitter (above) and Facebook (below). Both of these graphs indicate a spike in the use of transphobic slurs in posts around June 22 (A), which corresponds with the announcement of New Zealand weightlifter Laurel Hubbard’s participation in the Olympics. 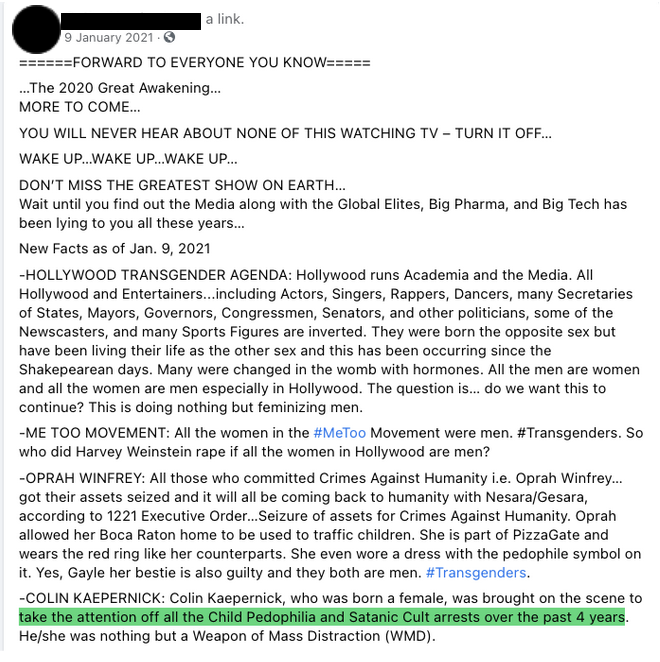 Of the 100 most-shared posts containing at least one word from each of the two sets of keywords (‘sports’ and ‘transgender’) on each platform, ISD found 18 Facebook posts and 14 tweets that misgendered transgender athletes, with a combined number of shares of 153,959 on Facebook and 47,863 on Twitter.

Another story that obtained significant coverage on Twitter was that of Chelsea Mitchell, a young girl in Connecticut who complained about having to compete against transgender athletes. Her story was published by USA Today, which notably used the word ‘male’ to refer to transgender girls throughout the article.

The story was later corrected with an apology from the publishers but was republished in its original version by Alliance Defending Freedom (ADF) (see Figure 6). ADF is an American conservative Christian advocacy group which has been labeled as an extremist anti-LGBTQ group by the Southern Poverty Law Center and went on to represent Mitchell in a lawsuit against the Connecticut Interscholastic Athletic Conference. Five posts about the story were among the 100 most retweeted tweets within our dataset, 2 of which contained links to the USA Today article, and 1 to the ADF article. 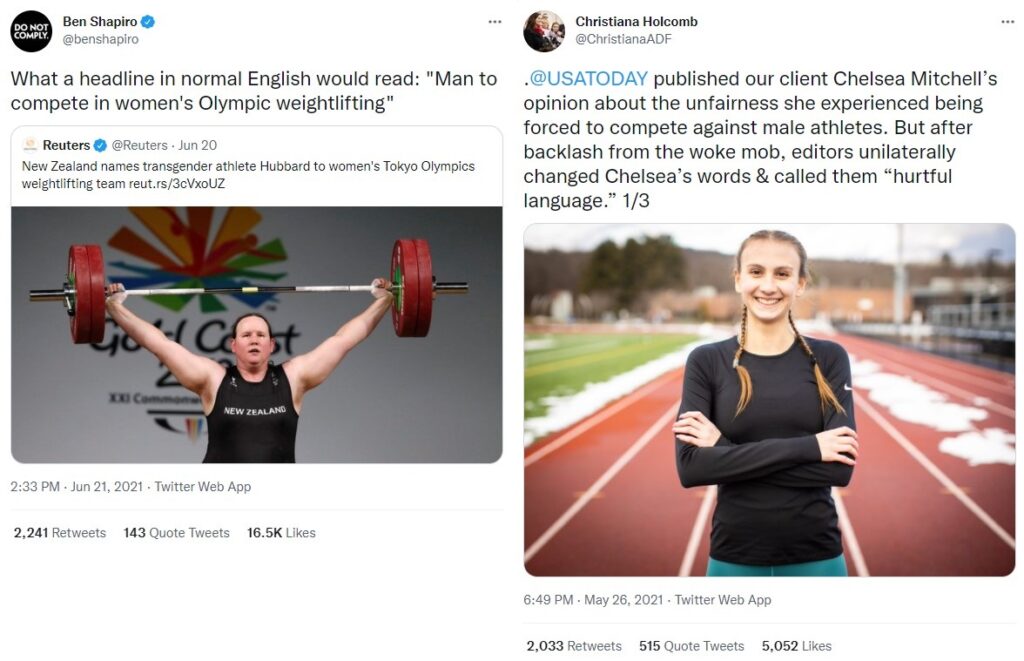 The majority of accounts behind the the 100 most-shared posts had an explicit alignment with the political right in the U.S. ISD researchers established this political alignment through a tool developed by the company  AllSides, which provides media bias ratings for over 800 sources. Additional research was also conducted for each of the accounts  identified.

Where no clear political position was identified, the account was considered neutral. Of the 100 most-shared posts on Facebook, 73 had a right-wing political alignment, 24 were left-wing and 3 were neutral. In other words, 73% of the conversation about transgender athletes in this dataset originated with right- wing actors. On Twitter, the political alignment of the accounts was more diverse.

Though accounts with an explicit right-wing alignment were still the plurality with 39 posts, politically neutral accounts accounted for 35 posts, and left-wing accounts generated 26 of the posts. However, the most prolific accounts were all deemed to be aligned with the U.S. right-wing. 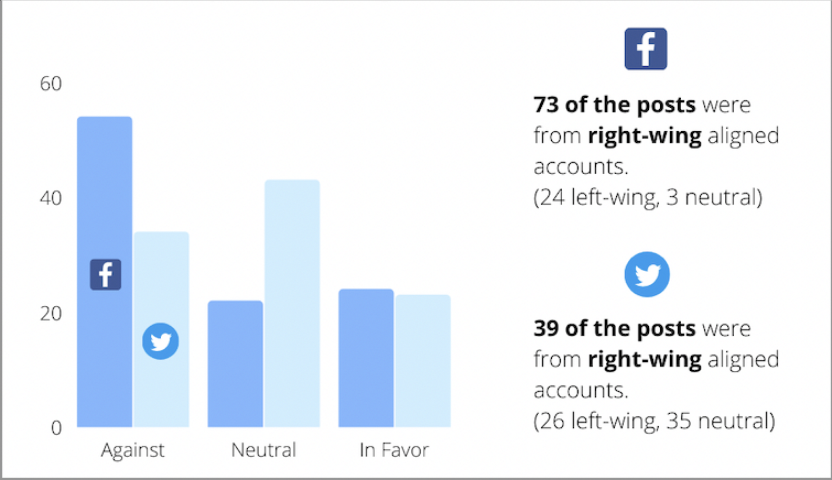 The most prolific authors, with 10 posts each, were the Facebook pages of Breitbart and ForAmerica. Following these, with 6 posts each, were conservative commentator Ben Shapiro and Republican politician and conspiracy theorist Marjorie Taylor Greene.

Evangelist and missionary Franklin Graham, along with Fox & Friends, followed with 5 posts each. The most prolific author on Twitter was Breitbart News with 5 posts, followed by Marjorie Taylor Greene and Donald Trump Jr. with 3 posts each. 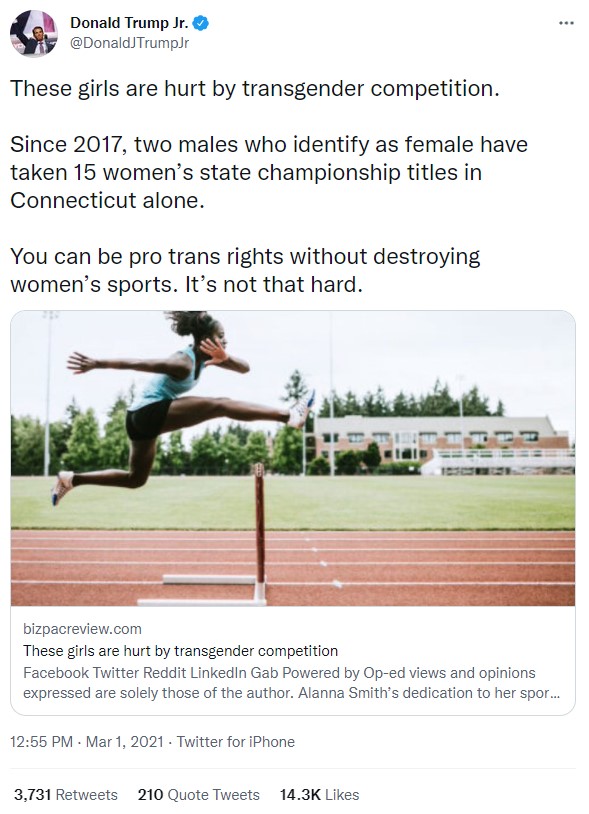 Figure 9 –  Donald Trump Jr. posted three of the 100 most retweeted posts about transgender athletes during the period of research. His large following on Twitter means his content would have reached a large audience. His most shared post, with over 3,000 retweets, misgendered transgender athletes. His three tweets were retweeted a total of 5653 times.

While the discussion of the inclusion of transgender athletes in women’s sports does not necessarily have to be transphobic or hateful, this research demonstrates how these debates can be couched in terms that are harmful to trans individuals, highlighting a lack of consistency in platforms’ moderation of this kind of discussion. Both Meta and Twitter do not appear to protect the transgender community from hate speech and misgendering on their platforms. On both platforms, current policies to protect the community still lack a definition for misgendering, and when a policy against misgendering is present (as is the case for Twitter), it appears to be poorly enforced.

Overall conversation about transgender athletes on both Meta and Facebook was overwhelmingly negative, with discussion driven by conservative authors and outlets who repeatedly misgendered transgender people in their posts. Additionally, the research highlighted deliberate and extensive targeting of transgender athletes with pronouns or language that did not correspond with their self-identification. Such content was used in posts from prominent and verified accounts with large followings, obtaining thousands of shares.

It is not realistic to expect platform moderators to monitor millions of posts for content that misgenders or directs abuse at transgender athletes on a daily basis, and nor is it a feasible solution to the issue.

At the very least, however, social media companies must ensure that prominent media outlets and public figures are not able to generate support or gain traction with such content. One such way of achieving this could be through actively monitoring accounts that have shown to be repeat offenders on this issue, such as those highlighted in this research.