As Finland announced its historic decision to seek NATO membership alongside Sweden, supporters of Moscow’s claim that Russia is “denazifying” Ukraine began to associate Finland, which remained neutral for many decades, with fascism. This narrative aligns with attacks against NATO that frame the organisation as supporting “neo-Nazi” ideology and white supremacy.

Finland is currently ranked third on the worldwide Democracy Index and fifth of the World Press Freedom Index, making accusations about the country being fascist seem absurd. However, these accusations often focus on two aspects of Finnish history: the former emblem of its air force and its role in WWII. Both these aspects of the country’s history make it an easier target to decry as fascist than fellow applicant Sweden. The narratives targeting Finland decontextualise and mispresent these historical facts, a tactic common amongst apologists of Russia’s invasion of Ukraine.

The Finnish Air Force used a swastika in its badge until 2020. This fact has been weaponised to associate Finland with fascism. Its removal has not been fully explained, but Finnish political scientist Teivo Teivainen suggested it may have been to prevent potential recruits being deterred, as well as a desire to avoid sending incorrect political signals to Russia and the West.

While the swastika was most famously appropriated by the Nazi party and since WWII has been perceived as synonymous with Nazi Germany, the symbol dates back at least 15,000 years and is still commonly used in Hinduism, Buddhism, and Jainism.

The Finnish Air Force’s use of the swastika predates its adoption by the Germany Nazi Party by two years. In 1918, the Swedish count Erich von Rosen gifted a plane to the air force of the newly independent Finland. The plane had a blue swastika painted on it for good luck, and the Finns continued using the symbol thereafter. While it should be noted that von Rosen later developed ties to the Nazis through family relations, no such connections existed at the time of the gifting.

This is far from the only instance in which the use of the swastika has caused confusion. In 2016, following complaints that foreigners misunderstood their meaning, Japan considered replacing the counter-clockwise swastikas used to indicate the locations of Buddhist temples on tourist maps. In Australia, a delivery driver reportedly destroyed artwork a Hindu family left on their porch after he mistook it for the Nazi symbol. Like the word “Aryan”, the swastika has – at least in many Western contexts – been removed from its origins and received deeply negative connotation due to the crimes committed by National Socialists. 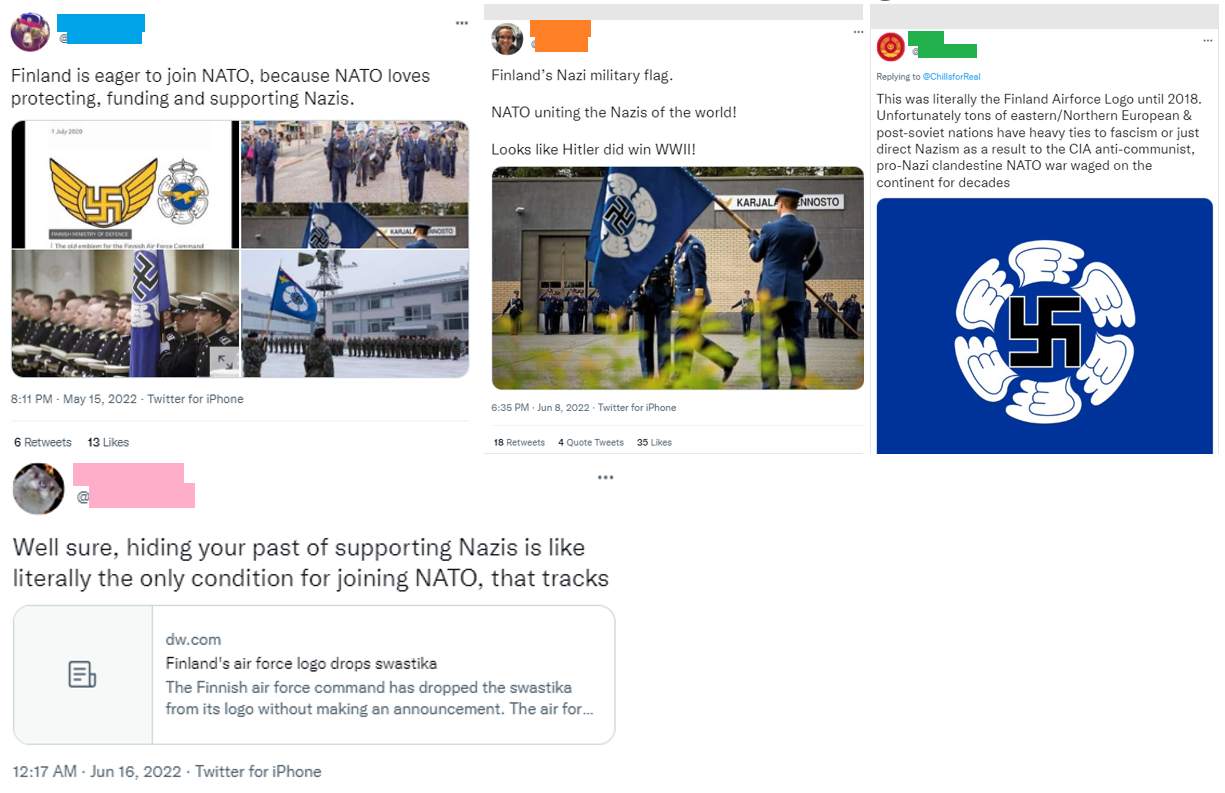 Conspiracy theorists, far-left extremists and other actors spreading disinformation have picked up on the Finnish Air Force’s former usage of the Swastika. They claim that Finland is a fascist country, and that its plans to join NATO indicate that the latter organisation is sympathetic to neo-Nazis.Posts such as those below aim to trigger a response based on the negative connotation the swastika has in the West. The association of the swastika with the Nazis is so strong that it may prevent viewers from researching the matter further, with the use of the swastika itself seen as sufficient to corroborate the argument.

“Finland is siding yet again with fascism”

While the use of the swastika by the Finnish Air Force and the Nazi Party is unrelated, some online users have also tried to link the symbol to Finland’s support for Nazi Germany during WWII. Opponents of NATO and Putin apologists do not engage with Finland’s wartime history in a nuanced or contextualised manner. One common claim among such users is that “Finland is siding yet again with fascism”. Their focus lies exclusively on Finland’s alignment with Nazi Germany during WWII and oversimplifies Finland’s complex involvement in the war. 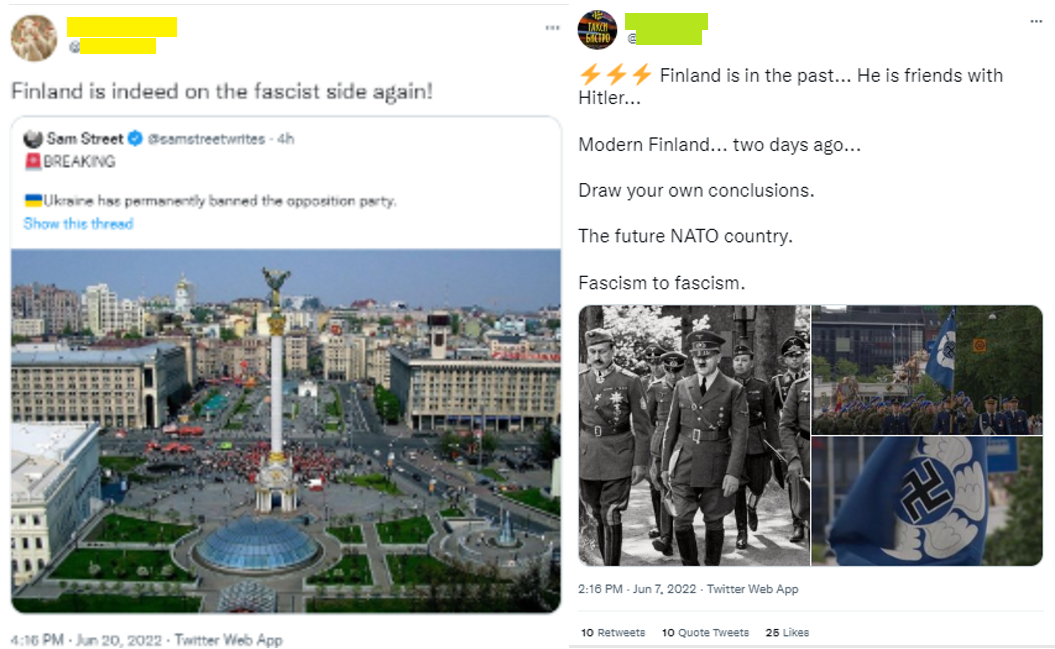 Images 5 & 6: Tweets disparaging contemporary Finland based on its history and involvement in WWII.

Over the course of the WWII (1939-1945), Finland fought three wars in different alliance constellations: the Winter War, the Continuation War, and the Lapland War. A full explanation follows, but in short, Finland was first invaded by the Soviets, before joining the Axis powers in an attempt to recoup its losses, and then finally signed an armistice with the Allies and fought a war against Germany from 1944-45.

Finland declared independence in 1917 after centuries of Swedish and Russian rule. While the Soviet government recognised their independence in 1918, this recognition did not last. A secret protocol to the 1939 Molotov-Ribbentrop Pact (a non-aggression pact between Nazi Germany and the Soviet Union) allocated Finland and the Baltic states to the Soviet sphere of influence.

In 1939, following Soviet demands for land exchange, an NKVD (Soviet secret police) unit shelled a border guard post near Mainila and Moscow blamed Finland for the incident. After Finland rejected Soviet demands to apologise for this false flag incident, the USSR invaded the country, leading to the Winter War between 1939-40.

Finland received sympathy internationally, especially from the Scandinavian countries. France and the UK had plans to intervene on behalf of Finland, which did not materialise. This was in part due to Hitler threatening to invade Sweden if they allowed Allied soldiers to pass through their territory, as Germany received much of its steel from an ore in Sweden which could be threatened by Allied troops passing through.

Limited international support meant that despite its resistance, Finland sought a diplomatic end to the war, which resulted in the 1940 Moscow Peace Treaty. The USSR demanded even more territory than before the war and Finland was forced to cede a great part of Karelia among other lands.

Finland sought international cooperation and to recoup its losses after the Winter War. Looking for other allies to face the USSR with, it signed the Anti-Comintern Pact in 1941. This anti-communist pact was first signed by Germany and Japan in 1936, and later by Italy in 1937.

Finland rejected offers to join the Tripartite Act, a treaty to affirm relationships between Germany, Italy and Japan (the principal members of the Axis Powers), as its principal aim was to revise the results of the Winter War, and keep diplomatic relations with the West. Finland’s involvement with the Axis Powers has led to ongoing controversy and academic debate as to whether it could be considered a true member of the alliance and if the country’s relative isolation could justify rapprochement to fascist nations.

During the Continuation War (1941-44), Finland invaded the USSR alongside Germany and other Axis Powers. However, following the German defeat at Stalingrad, Finland began to look for ways out of the war and they finally reached an armistice with the USSR and UK in September 1944. The terms demanded that Finland drove German troops out its territory, leading to the Lapland War (1944-45) in which Finnish soldiers fought against German troops. 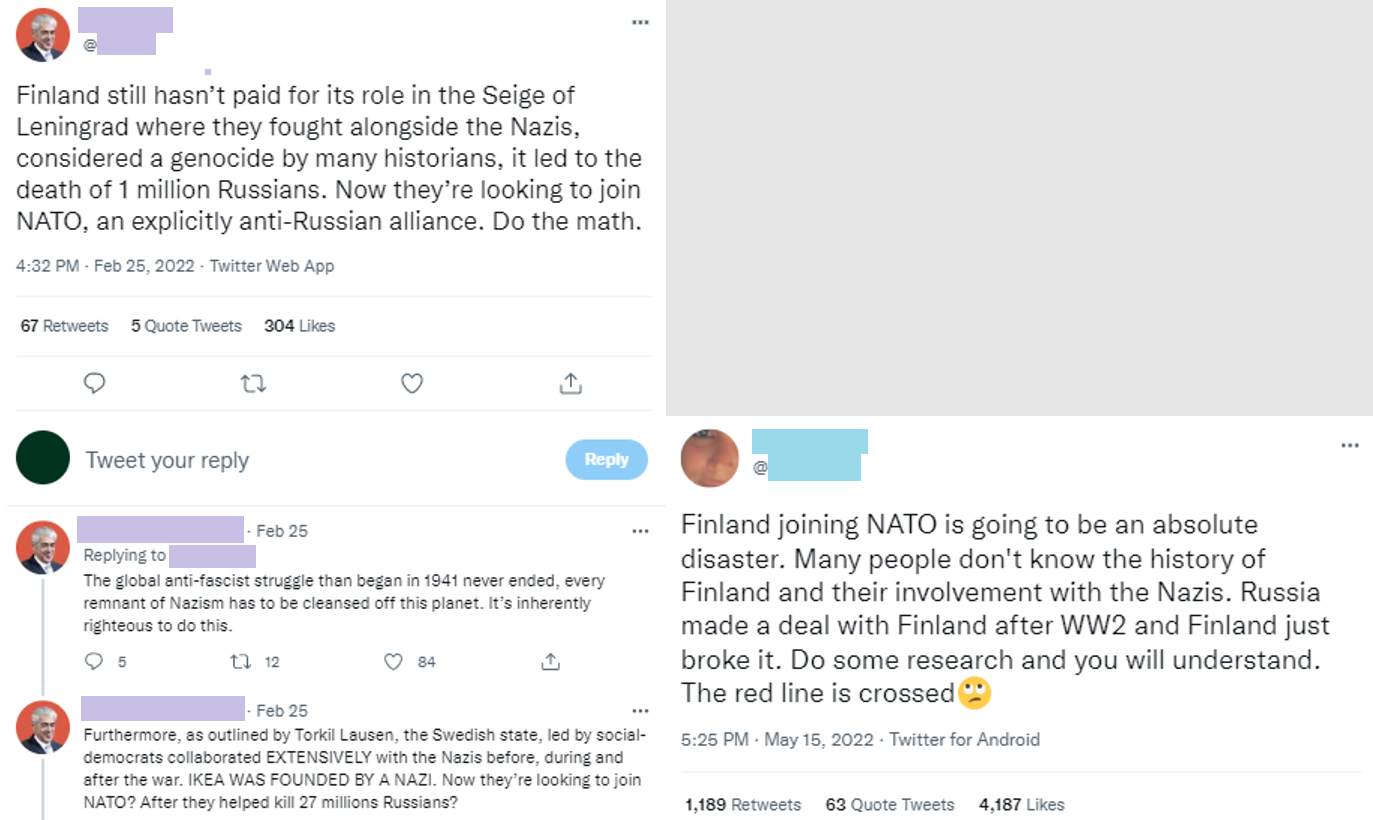 In narratives and content misrepresenting Finland’s role in the war, the focus lies exclusively on Finland’s alignment with Germany during the Continuation War, ignoring previous Russian aggression that laid the groundwork for this decision, as well as Finland’s later war against Germany. Image 9, a post about Finland’s temporary alliance with Germany, has at its core an assumption that a country’s policies and the circumstances influencing them will remain unchanged over eight decades, including major geopolitical shifts that have happened. Some actors have even tried to link NATO to Soviet causalities during the Second World War, even though the alliance was only founded four years after VE Day (image 9 above).

What happens when history is rewritten?

Whataboutism tries to erase and change the historical memory of past events in order to benefit present day agendas. It is the practice of responding to a difficult question or accusation by bringing up a separate issue or making a counter-accusation, distorting the greater context within which the events occurred. Finland’s role in WWII, its historic involvement with Germany and memory culture are legitimate subjects for research and academic debate. However, bad faith actors are attempting to distort and simply the past to benefit their contemporary disinformation efforts.

If Finland had been a full, uncontested member of the Axis Powers, it would still only tell us little about its present-day politics. History may influence present day policymaking, but it does not determine it. Arguably, Finland’s decision to apply for NATO membership was more influenced by its experience of Soviet invasion and foreign occupation than its involvement with the Axis alliance.

In the case of the swastika, two similar symbols with different origins have been connected without exploring the actual relationship between them. While the former use of the swastika by the Finnish Air Force and Finland’s cooperation with Germany during WWII both occurred, they have been decontextualised. Online narratives labelling Finland as ‘fascist’ present timelines of historical events non-sequentially, and cherry-pick historic facts to support a narrow and ideologically-tinted interpretation of events.

These arguments fall into a fallacy where countries are judged based on an arbitrarily chosen moment of their history rather than their current political system. As previously shown by ISD, the most effective disinformation contains a “kernel of truth”, but then warps that into misleading or unsubstantiated statements that play into readers’ biases. This bias could be principled opposition against any NATO action, or the idea that some countries are condemned to remain buffer states between great powers and need to rescind their own agency. Attempts to associate present-day Finland with fascism take certain true facts and turn them into disinformation.