ISD’s Digital Dispatch “#IstandwithRussia – Anatomy of a Pro-Kremlin Influence Operation” analysed a pro-Kremlin influence operation masquerading as a genuine social movement. Accounts that had previously been used to amplify wedge issues were re-purposed to promote pro-Kremlin hashtags, with the hashtag #IstandwithRussia reaching a total of 153,558 tweets between 24 February – 7 March 2022.

Russia’s invasion of Ukraine has led to the destruction of civilian infrastructure, forcing countless people to flee their homes. In the first week of the war, more than a million refugees from Ukraine fled the country and many were welcomed into neighbouring countries. However, reports have shown racist incidents at the Ukrainian-Polish border. Those affected have, for example, been denied entry onto public transport and passed by in the distribution of aid in favour of white refugees. Multiple physical attacks have also been reported.

Testimonies and videos from people fleeing Ukraine have been shared on Twitter, causing outrage about the racial discrimination of non-European, non-white refugees. Criticism has referred to Western double standards and compared the war in Ukraine to other violent conflicts in Palestine, Syria, Yemen, or Afghanistan.

Simultaneously, Western media outlets have been criticised for their coverage of the refugee crisis, which has taken a strikingly different tone to previous coverage of refugees from the MENA region. They were, for example, referring to Ukrainian refugees as “people with blue eyes and blonde hair” and Ukraine as “relatively civilized, relatively European”. CBS, NBC News, the BBC, Al Jazeera English, The Telegraph, La Sexta and BFM TV are among the media outlets accused of platforming such statements.

As criticism of Western media coverage of refugees fleeing the war emerged, pro-Kremlin hashtags trending on Twitter picked up heated political debates accusing the West, especially the U.S. and NATO, of double standards and hypocrisy in their response to Russia’s invasion.

Image 1: Tag cloud of hashtags, locations, organisations, people, phrases, and keywords, where the frequency determines the size in the cloud, based on posts in our dataset (between 24 February – 4 March 2022).

The Kremlin’s use of whataboutism and anti-hypocrisy rhetoric

Widespread criticism of Western hypocrisy, also known as anti-hypocrisy rhetoric, has been a common trait among political actors, including the radical left and radical right. It has become a tool used to criticise a West-dominated liberal order, attacking universalism, globalisation, “American militarism”, “NATO aggression”, or the role of the West in wars in Afghanistan, Iraq, Syria, Libya or Yemen.

As Russia’s military invasion of Ukraine escalated, accusations of Western hypocrisy and double standards fell neatly into the Kremlin’s longstanding use of whataboutism. Use of this tactic involves, for instance, citing the Iraq War or NATO’s intervention in Kosovo to excuse Russia’s violations of international law.  Anti-hypocrisy has long been part of Russia’s strategy for delegitimising the international liberal order. By exposing the alleged hypocrisy of the West, pro-Kremlin narratives deflect conversations about Russia’s military aggression into outrage about Western double standards.

This analysis is rooted in the pro-Kremlin Twitter hashtag #istandwithputin, which was likely part of a wider Russian influence operation, and gained significant traction online during the first week of Russia’s invasion of Ukraine. Using Brandwatch, a social media analysis tool, we analysed tweets mentioning this hashtag and identified four additional pro-Kremlin hashtags (#istandwithrussia, #isupportrussia, #putinisright, #westandwithrussia) based on top mention counts, in order to broaden the scope of the analysis. We then collected all posts that mentioned one or more of these five pro-Kremlin hashtags between 24 February, the first day of Russia’s invasion, and 4 March 2022. This method resulted in a dataset of 318,066 Twitter posts.

Within this dataset, we analysed the top 100 most frequently mentioned hashtags, manually filtering for any hashtags that referred to the refugee situation, racist incidents reported in Ukraine and Poland, racist media reporting, or accusations of Western hypocrisy and double standards. Out of the 318,066 pro-Kremlin Twitter posts collected, 19,530 posts (6.14%) mentioned at least one hashtag linked to these topics. 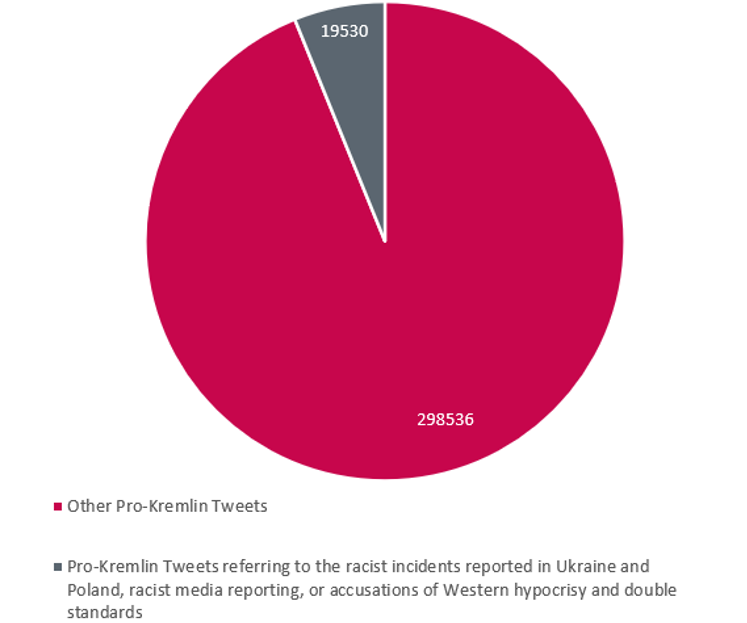 Another subtheme emerged around the hashtag #racisteu, discussing the racist incidents in Ukraine and Poland, as well as the racist reporting of global media. The smallest thematic subset was related to India.

Table 1: Themes identified within the dataset of pro-Kremlin tweets that referred to the refugee situation, racist incidents reported in Ukraine and Poland, racist media reporting, or accusations of Western hypocrisy and double standards.

In our dataset, a total of 9,373 pro-Kremlin posts justifying and expressing support for Russia’s invasion of Ukraine used the hashtags #hypocrisy, #doublestandards or #terrorists. In this sample, the most widely shared post (3,581 retweets) accused Western leaders of hypocrisy in a dark caricature. Another tweet labelled former US Presidents as “war criminals” and the “worst serial-killer [sic] the World has ever seen”. The post goes on to claim that “#Putin has won against the West”. 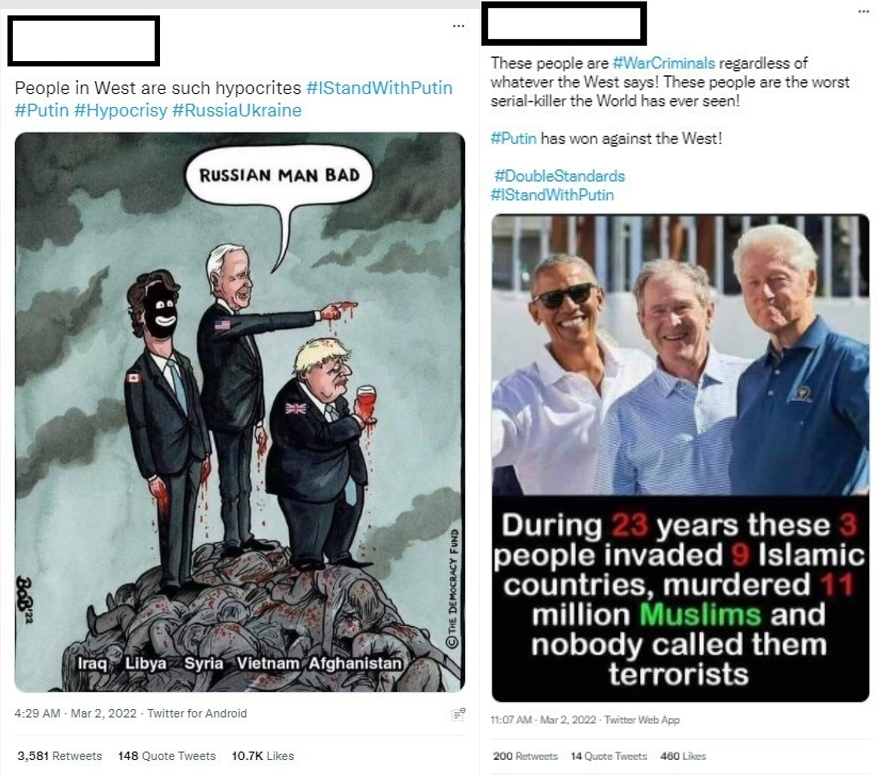 5,961 of the pro-Kremlin tweets in our dataset included at least one hashtag related to race. These hashtags (#blacklivesmatter, #racism, #racistukraine and #africansinukraine) are generally used to raise awareness of racial discrimination or to discuss racist incidents against Black people and people of colour.

However, within our dataset of pro-Kremlin tweets, the five tweets with the highest number of retweets were not discussing anti-racist activism but were instead portraying Russia as an ally and historical supporter of Africa. The tweets further indicate how issues directly caused by the war in Ukraine, such as the mistreatment of Africans fleeing Ukraine, were hitched to pro-Kremlin content. 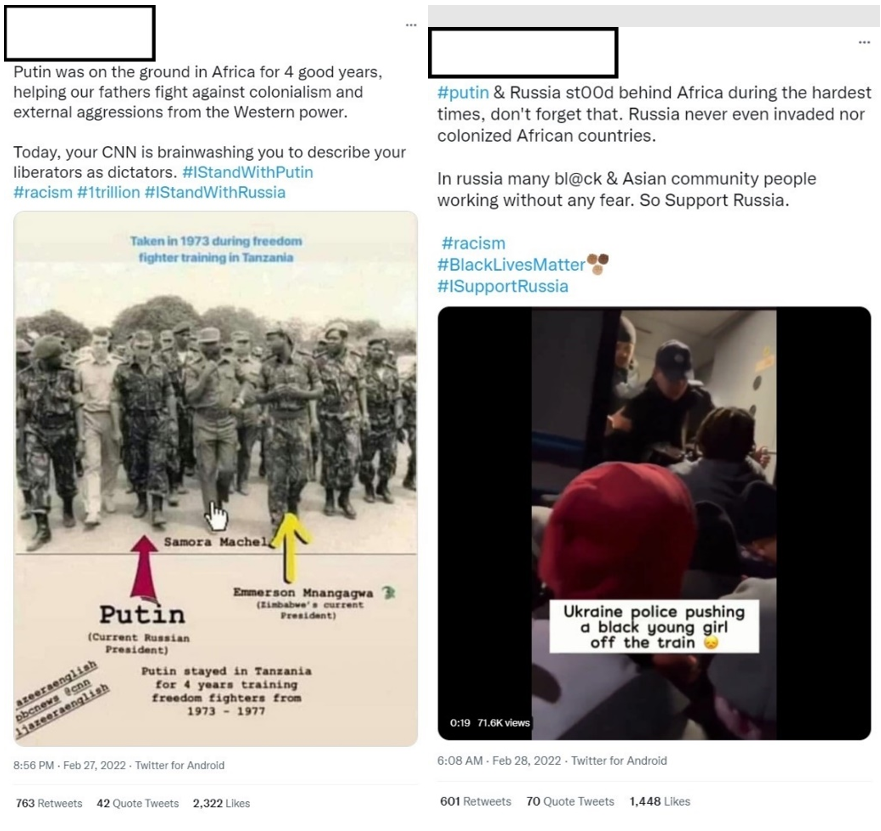 6,122 pro-Kremlin posts in our dataset included one or more of the hashtags #palestine, #israel, #freepalestine or #istandwithpalestine. Of these, 1,260 referenced Western hypocrisy, calling out inconsistencies between the West’s responses to the situation faced by the Ukrainian people versus the Palestinian people.

One of the most widely shared tweets from this sample accused Westerners of disregarding the crisis in Palestine but does not elaborate on their support for the Russian government. Another tweet reads, “I stand with #Russia […] because i [sic] care about my #Palestine people’s!”. 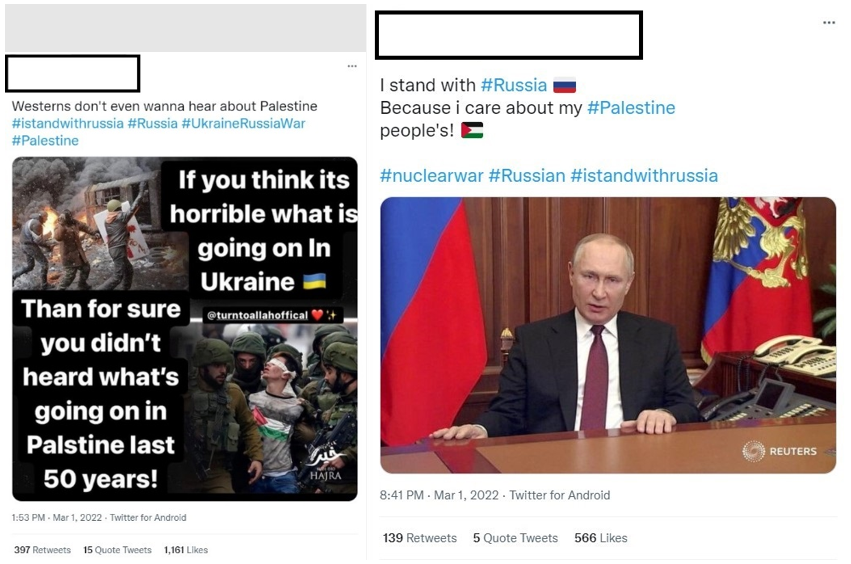 Beyond our dataset, we looked at the total mentions of identified hashtags between 24 February – 4 March to consider to what extent they have been paired with pro-Kremlin tweets.

The hashtag #racisteu emerged in the context of accounts of racism faced by non-white refugees and hypocritical media reporting on the war. 2,059 posts within our dataset mentioned this hashtag. Within this sample, the most widely shared tweet claimed “the threat to world peace is the USA and not Russia”. The second most widely shared tweet portrayed Russian President Vladimir Putin as a historical ally for African nations. 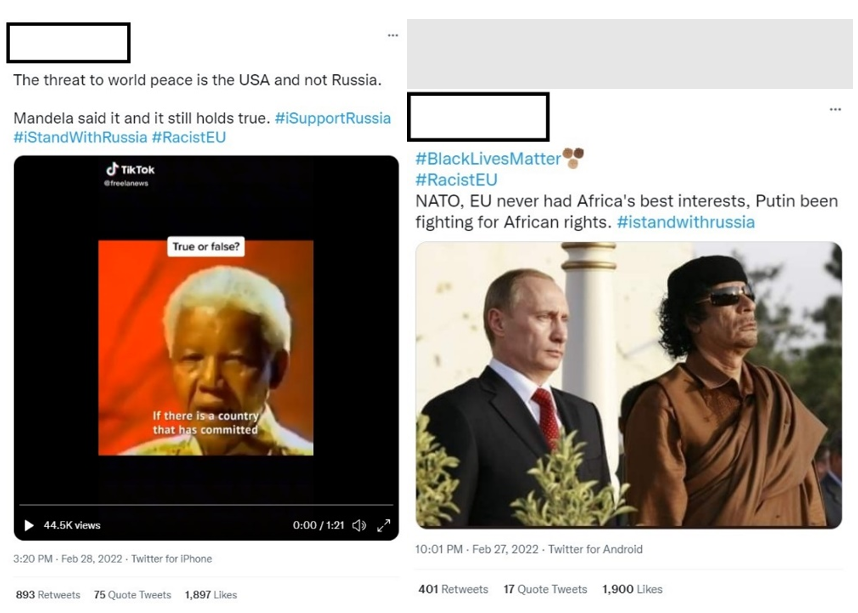 Among those facing racial discrimination during their attempts to flee Ukraine are Indian nationals and those of Indian heritage. In our dataset of pro-Kremlin tweets, the hashtag #India was used in 2,139 tweets.

The post with the highest number of retweets contained the pro-Kremlin hashtag #IStandWithPutin and the hashtag #India, together with an image from 2021 showing India’s Prime Minister Narenda Modi with President Putin. The post reads, “India stands with Putin no matter what happens”. Another popular tweet condemned racism against non-white and Indian refugees, expressing support for Putin and the invasion using the hashtag #IStandWithPutin. 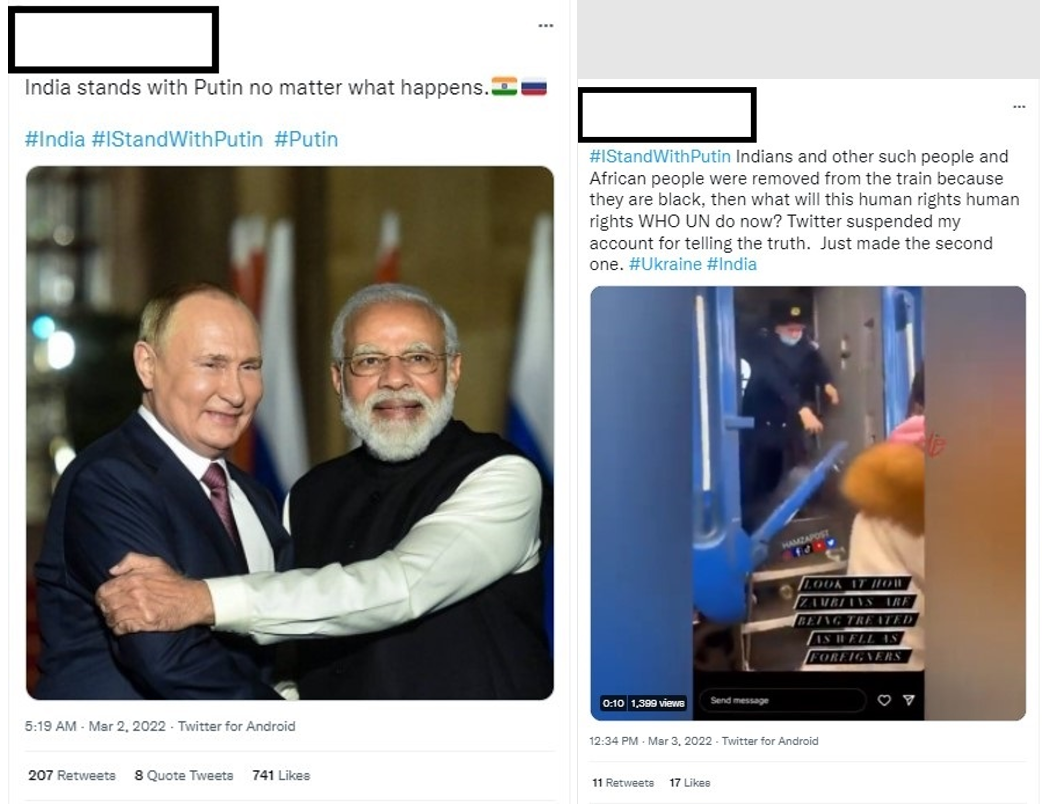 The use of whataboutism and the manipulation of hashtags

This analysis shows how pro-Kremlin content – including infographics, memes, and images – is using whataboutism, appropriating societal issues such as racial discrimination as well as legitimate concerns such as demanding consistency and equality in regard to victims of racism, war and humanitarian crises, to appeal to or draw support from a range of non-Western audiences who have historically suffered at the hands of Western powers. The appropriation of historical grievances together with anti-hypocrisy rhetoric attempt to distort the reality of Russia’s invasion of Ukraine.

Trending pro-Kremlin hashtags were hitched to tweets mentioning hashtags referencing racism, Western hypocrisy, and double standards in the context of the war in Ukraine as well as geopolitical and historical ties between Russia and other non-Western regions, such as Africa and India. The latter appeared designed to demonstrate the existence of a larger, united front against the West.

Whataboutism tactics not only aim to distract from Russia’s unlawful and violent military aggression against Ukraine, they may also weaken genuine and legitimate debate of exploited issues. It risks dehumanising real experiences of racism, colonialism, and discrimination in support of pro-Kremlin legitimisation of Russia’s invasion of Ukraine.

Ultimately, by moving away from the actual subject and intended purpose of a debate and pairing them with hashtags related to one’s own agenda, actors are equating disconnected claims in a way that cannot be controlled by the original publisher of a given hashtag. Yet, “viral” and trending hashtags continue to shape political discourse, which makes them prone to manipulation, including through inauthentic influence operations.

The findings of this analysis highlight the need for platform design features that prevent the manipulation of hashtag amplification, as well as the need for quicker interventions with regard to inauthentic behaviour, as political discourse has often already moved on to another subject by the time inauthentic content is removed.

The European Parliament recently adopted new report on foreign interference in all democratic processes in the EU, including disinformation . The text calls for binding rules that oblige platforms to set up systems which can monitor how their services are used, such as “real-time monitoring of the most trending and popular posts in a country-by-country overview, in order to detect information manipulation and interference”. The resolution further calls on platforms to provide detailed reports on “the resources devoted to in-country factchecking, research activities, content moderation, including human and AI capacities in individual languages, and collaboration with local civil society”.

Such demands, alongside the ongoing trilogue negotiation on the EU’s Digital Services Act, are necessary steps towards greater transparency and accountability of online platforms.

Sara Bundtzen is a Research and Policy Associate at ISD Germany, and is also involved in the Digital Policy Lab (DPL), an intergovernmental working group focused on policy responses to prevent and counter online disinformation, hate speech and extremism.

Paula Matlach is a Research Associate at ISD, studying the spread of disinformation and propaganda in German and English-speaking countries.