As outlined in ‘Contextualising Rhetoric around ‘Fascism’ Targeting Ukraine and Western Support’ , state-sponsored pro-Kremlin narratives have peddled an image of a ‘fascist’ and ‘neo-Nazi’ Ukraine. Well-known concerns about the far-right origins of the Azov Regiment, previously known as the Azov Battalion, have played into the Kremlin’s disinformation playbook, which looks to de-contextualise and deceive with narratives of an alleged ‘Nazi threat’ in Ukraine.

This Dispatch breaks down the context behind the Azov Regiment, explaining why it is highly misleading to conflate its far-right origins with claims that the whole of the Ukrainian armed forces or Ukrainian society are ‘neo-Nazi’. Additionally, it provides a qualitative snapshot of anti-NATO narratives disseminated by pro-Kremlin individuals, focusing on influential self-proclaimed journalists and conspiracy actors on English-speaking Twitter.

When Russian President Vladimir Putin announced the invasion of Ukraine, calling it a “special military operation” to “de-Nazify” Ukraine, the Azov Regiment was one of the groups he referred to. This has made the Azov Regiment and other Ukrainian armed forces a prime target of the Kremlin’s myth about Ukrainian fascism.

The Azov Battalion was formed in May 2014 as a volunteer battalion to fight Russian-backed separatists in the Donbas War. It was initially composed of volunteers known as “ultras”, a byword for hard-core, far-right soccer fans, and one of its founding members was Andriy Biletsky. Biletsky also founded the ultranationalist paramilitary organisation ‘Patriot of Ukraine’, which championed white nationalist, anti-immigrant and extreme-right ideas. The group’s insignia, worn by its members, featured neo-Nazi symbols such as the Wolfsangel and the Black Sun. Azov gained domestic prestige and international prominence in 2014 as it helped re-capture Mariupol. In late 2014, the Battalion became a Regiment and officially enrolled in the National Guard, which is part of the Ministry of Internal Affairs of Ukraine.

It is highly misleading to conflate the Regiment or the Azov movement with the Ukrainian government, armed forces or society as a whole. To do so vastly distorts the magnitude of influence of the Regiment and the far-right in Ukraine. Azov Regiment forces are estimated to be between 900 to 2,500, the National Guard — of which the Regiment is a part — is estimated to be around 50,000 members, and the Ukrainian armed forces are composed of about 250,000 troops. Distortive framing also misconceives the status of the Azov Regiment as “paramilitary” and ignores the group’s attempts to de-politicise itself with the extreme right-wing leadership leaving the Regiment. The military and political wings of Azov separated as Biletsky’s ‘Patriot of Ukraine’ became the far-right party National Corps in 2016. Biletsky still used the association with the Azov “brand”, reinforcing misconceptions about the Azov Regiment and far-right movements.

Even as part of a united far-right front, members of the Freedom (Svoboda) party, National Corps and Right Sector received only 2.15% of the vote in the 2019 parliamentary elections. Whilst the Azov movement is a player in the transnational far-right, pro-Kremlin narratives opportunistically simplify Western support for Ukraine and the role of the Azov Regiment to promote a ‘neo-Nazi’ threat in Ukraine.

“NATO is arming and training neo-Nazis in a proxy war”

Against this context, pro-Kremlin accounts inflate and distort facts about the origins of the Azov Regiment to discredit NATO and its military assistance to Ukraine. Disinformation attempting to scale back support for Ukraine frames NATO support to Ukrainian forces as “arming and training Nazis”.

An example of content spreading this narrative is an article by influencer and self-described journalist Ben Norton (213.4K followers). In the article, Norton claims that the “Azov movement was founded as a fascist gang that served as the muscle behind a violent US-sponsored coup in Ukraine in 2014”, and that subsequently “Washington and NATO have armed Azov to wage a proxy war on Russia”. 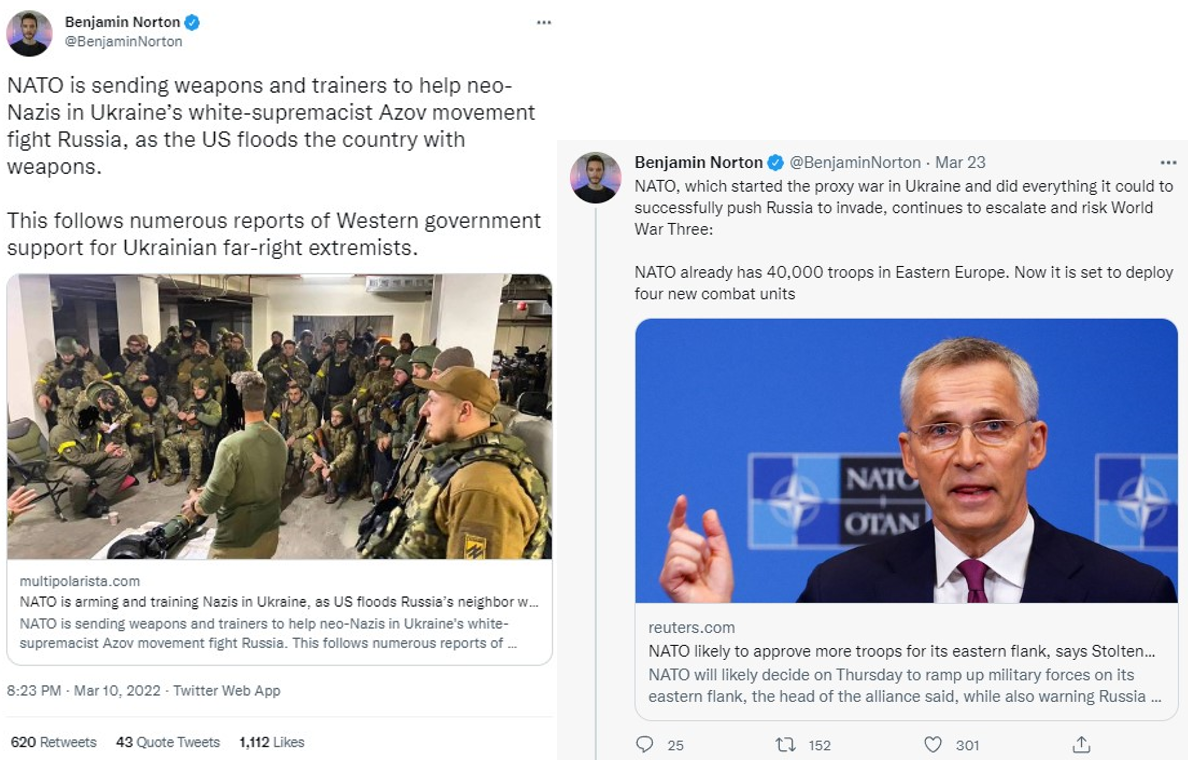 Images 1 and 2: Sample posts by Benjamin Norton, promoting the notion of a “proxy war” and that NATO is arming “white supremacists” in Ukraine (March 2022). 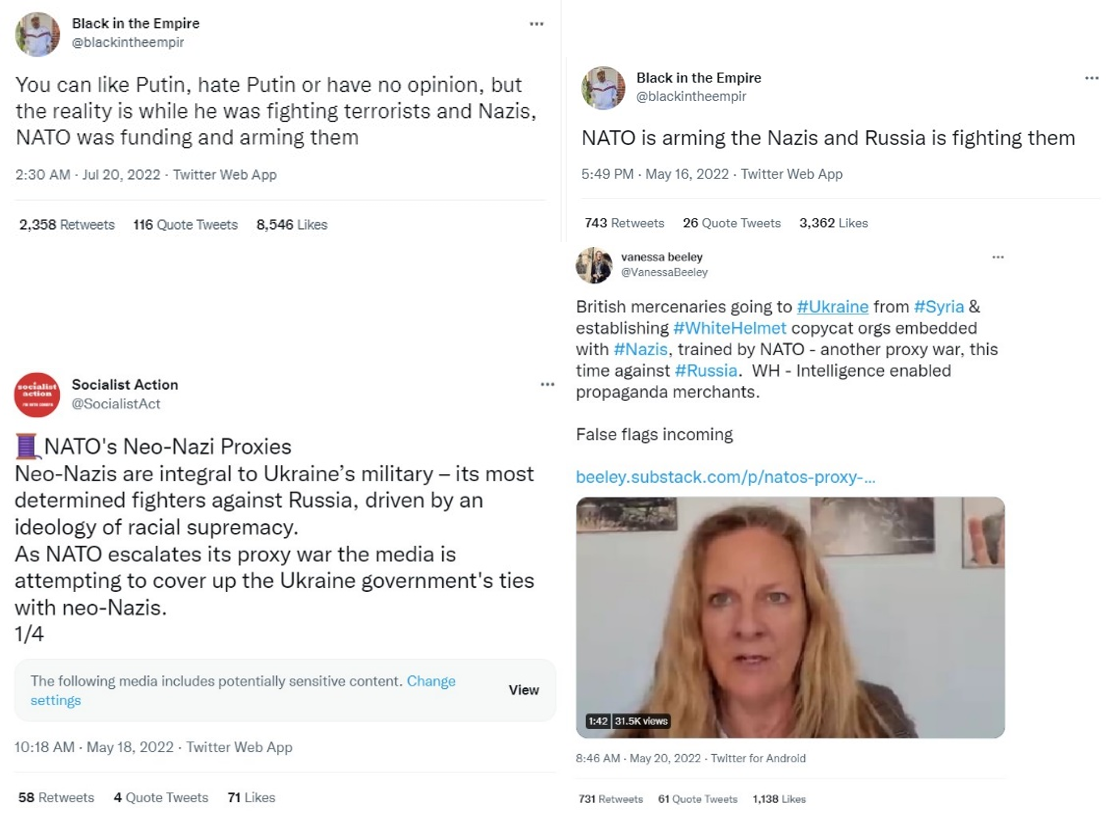 Images 3, 4, 5 and 6: Sample posts by influential accounts on Twitter, promoting pro-Kremlin narratives claiming NATO is arming Nazis in a proxy war (May and July 2022).

Most prominently, US Congresswoman Marjorie Taylor Greene (1M followers) who has in the past expressed a belief in QAnon, also called out NATO for “supplying the neo-Nazis in Ukraine” with weapons, using the hashtag #NATONazis. 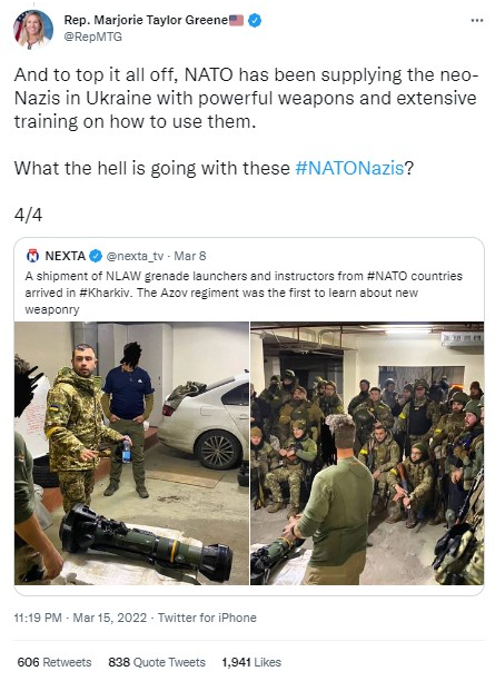 NATO allies have supplied military equipment to the Ukrainian armed forces in their fight against Russian-backed separatists since 2014. During this time, Western governments and observers extensively scrutinised the far-right origins and neo-Nazi affiliations of Azov, yet often referred to the Regiment, paramilitary units and the movement interchangeably, despite their differences.

In 2019, Members of Congress unsuccessfully urged the State Department to designate the “Azov Battalion…a well-known ultranationalist militia organization [sic]” a foreign terrorist organisation, although it had been officially a part of the National Guard since 2014. In 2022, US Congress extended an explicit prohibition of any US funding from being used “to provide arms, training or other assistance to the Azov Battalion”. Such statements confuse the Azov Regiment with the Azov movement, a network within the transnational extreme-right. This lack of differentiation has been exploited and distorted by pro-Kremlin actors in an attempt to undermine legitimate debate about NATO’s military support to Ukraine and justify Russia’s invasion.

“NATO is a white supremacist organisation” 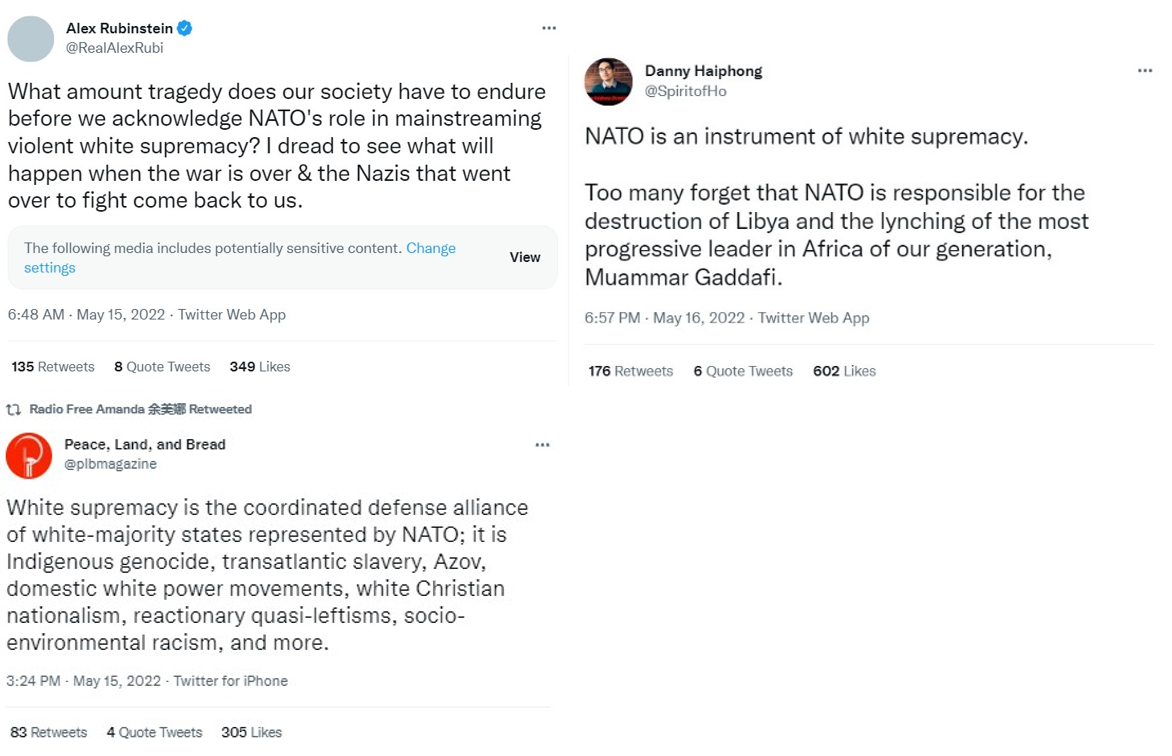 Images 8, 9 and 10: Sample posts by Twitter accounts with a high number of followers, promoting the notion of a ‘white supremacist’ NATO (May 2022).

Referencing Operation Gladio, a clandestine NATO-backed “stay-behind” operation set up in Europe to counter communist influence after the Second World War, conspiracy commentary paints a picture of NATO’s “secret armies full of fascists and neo-Nazis”. In one instance, a user merged the NATO flag with a swastika, reinforcing pro-Kremlin narratives of NATO supporting Nazis past and present. 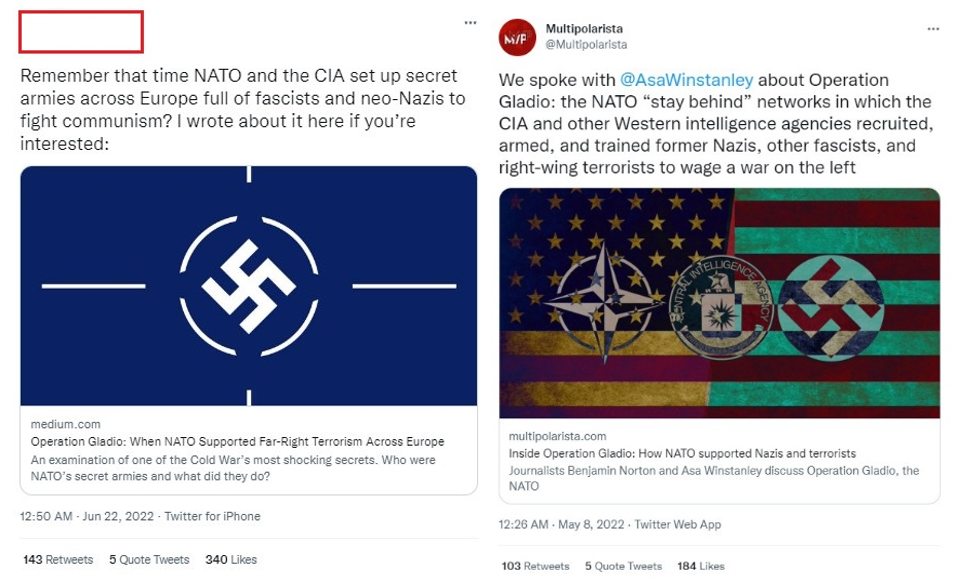 Images 11 and 12: Sample posts promoting conspiratorial and false connections between “Gladio” and present-day NATO (May and June 2022).

Ben Norton (213.4K followers) and Tim Anderson (84.2K followers), an Australian researcher of “counter-hegemonic studies”, allege that “the NATO media” and “mainstream media” pivoted in their reporting on Azov and the far-right in Ukraine since Russia’s invasion, deliberately downplaying the issues to fit a Western agenda.

There was, and still is, an abundance of Western media reporting about the Azov movement and its connection with far-right ideologies. Some observers have noted that Western media developed “a sort of Azov obsession, buoyed by a complete lack of nuance in the reporting around this group”.  Narratives about biased “NATO media” align with the Kremlin’s longstanding allegations of Western hypocrisy and double standards. 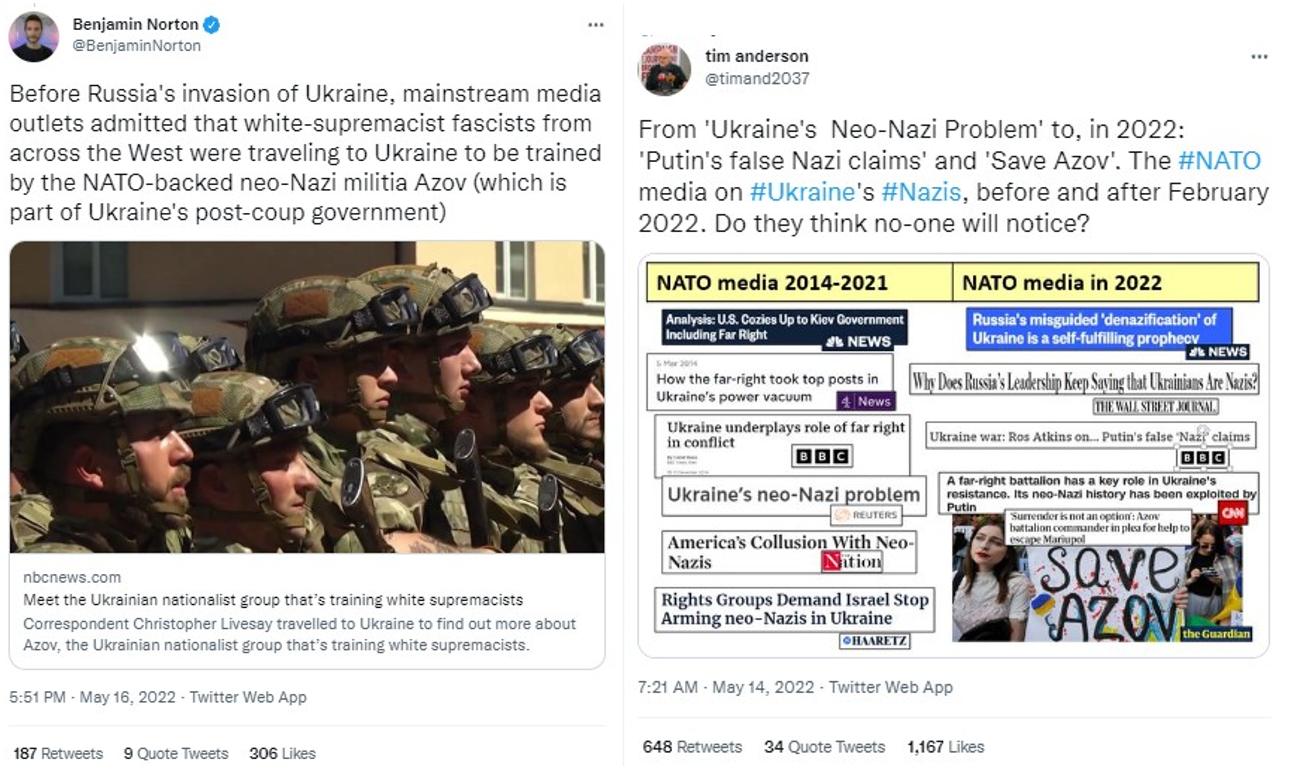 Images 13 and 14: Sample posts by influential accounts on Twitter, using “Western hypocrisy” criticism to discredit NATO’s “mainstream media” in the context of the Ukraine war (May 2022).

While the Kremlin has played a role in spreading the ‘Ukrainian fascism’ rhetoric online, non-state actors with high follower numbers on Twitter are promoting the spread of conspiratorial anti-NATO talking points. This way, the Kremlin benefits from narrative-building within a wider, fragmented online information environment that quickly de-contextualises and misconstrues information.

Pro-Kremlin narratives over the last few months have specifically accused NATO of supporting white supremacy and neo-Nazi ideology as a means of deflecting attention and criticism from the invasion and reframing the war with the Kremlin’s preferred term, “special military operation”. In doing so, these narratives exploit language around fascism, neo-Nazis and white supremacy for the Kremlin’s own purposes, attempting to discredit the support Ukraine is receiving from NATO and undermining the legitimacy of both NATO and Ukraine.

Sara Bundtzen is a Research and Policy Analyst at ISD Germany.