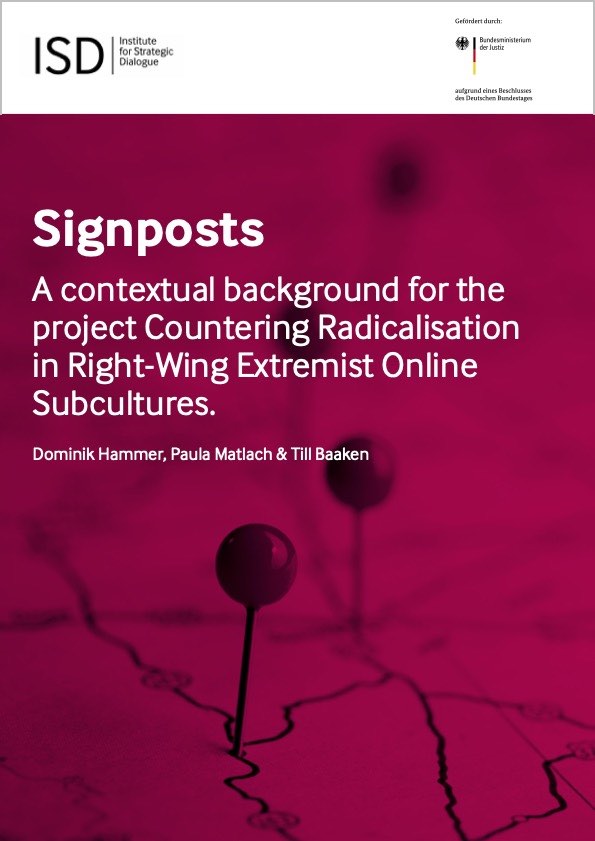 “Signposts” provides background information on the publications of the project “Countering Radicalisation in Right-Wing Extremist Online Subcultures” funded by the Federal Ministry of Justice  (BMJ).

While the research reports of the project “Countering Radicalisation in Far-Right Online Subcultures” are based on different methods of empirical data analysis, this background report highlights the historical and conceptual aspects of the project.

Dominik Hammer is a Research Manager at ISD, where his activities include analysing far-right radicalism and right-wing extremism online. His areas of interest include democratic theory, the strengthening of democratic practice and the analysis of anti-democratic movements. Before joining ISD, his experience included university research and teaching, as well as adult education. He is co-author of the ISD research reports  Escape Routes, Telegram as a Buttress, Detours and Diversions, and Auf Odysee, as well as the conference report In the Blind Spot.

Paula Matlach is an Analyst at ISD, where she studies the spread of disinformation and propaganda in German-speaking and English-speaking countries. Prior to joining ISD, she spent 18 months working as a researcher at the NATO Strategic Communications Centre of Excellence, where she published articles on network regulation and foreign influence, among other topics. She is co-author of the ISD research reports Escape Routes, Deutschland und der angebliche Klimalockdown and Auf Odysee.

Till Baaken is a Senior Manager at ISD, where he investigates right-wing extremism, Islamism, disinformation campaigns and conspiracy narratives in German-speaking and English-speaking countries. His work on radicalisation and deradicalisation has been published in a range of journals, including the Journal for Deradicalisation and the International Journal of Conflict and Violence, as well as several books and handbooks. He is co-author of the ISD research reports Escape Routes and Disinformation Overdose: A study of the Crisis of Trust among Vaccine Sceptics and Anti-Vaxxers.