This Dispatch explores how the antisemitic “Khazarian Mafia” conspiracy theory is being directed at the war in Ukraine. It outlines how a lack of historic sources on the Khazar empire and a highly contested hypothesis about Ashkenazi Jews have inspired antisemitic conspiracy theories that are now being weaponised against Ukraine.

The research predominantly focuses on German-language far-right and conspiracy Telegram channels. However, some of the content discussed was shared from English-language sources or translated to German from other languages.

Like any major crisis in the digital age, Russia’s invasion of Ukraine has spurred a barrage of conspiracy theories and disinformation online. While allusions to the (usually misrepresented) past are common in many conspiracy theories focused on geopolitics, history has become a particularly hot topic in this case. From denying Ukrainians’ ethnic identity to decrying its government as fascists, distortions of history have become tools used to undermine Ukraine’s right to exist as an independent and democratic state.

As with many contemporary conspiracy theories, antisemitism has been present in several narratives about the invasion, ranging from direct attacks on Ukrainian President Volodymyr Zelensky’s Jewish heritage, to tropes about global elites having their sinister plans foiled by Putin’s decision to invade. One of the antisemitic conspiracy theories being used to justify Russia’s invasion of Ukraine is the Khazarian Mafia.

Conspiracy theories about the Khazars

Conspiracy theories about the Khazars, a semi-nomadic Turkic people who established a major empire (Khazaria) between Eastern Europe and Western Asia in the Middle Ages, have been spread in conspiracist, right-wing extremist, and Islamist communities online prior to the current conflict. However, given that Khazaria spanned modern-day, south-eastern Russia, southern Ukraine, Crimea and Kazakhstan, they have acquired distinct geographic relevance amidst the war in Ukraine.

The Khazars became a popular talking point among conspiracy theorists due to the claim that the Khazar people, or at least their elites, converted to Judaism en masse during the 8th century. The lack of reliable, contemporary source research on the Khazars make it difficult to determine how true this claim is. Khazaria was forgotten for centuries, until it was rediscovered among early Zionists in the 19th century, who were interested in what they saw as a potentially historic Jewish state. While there do appear to have been conversions to Judaism among the Khazars, the extent of the conversion to Judaism amongst the wider populace remains unclear.

Much of the contemporary interest in the Khazars by conspiracy theorists can be linked to “The Thirteenth Tribe”, a book written by Hungarian-British author Arthur Koestler in which he presents the highly contested thesis that Ashkenazi Jews are  descendants of converted Khazars rather than of ancient Israelites. Koestler was aware that his theory could be exploited to delegitimise the State of Israel, but stated his hope that it would remove racial grounds for discrimination against the Jewish diaspora in Eastern Europe.

The use of Koestler’s theory by antisemites

Observation of German-language far-right and conspiracy Telegram channels in the present day would suggest that Koestler’s theory has been instrumentalised to promote antisemitism. In these channels, the terms “Khazars” and “Khazarian Mafia” have been used to describe Jewish people similar to how “Rothschild” and “Zionist” are used, ostensibly to soften antisemitic statements. More insidiously, the claim that Ashkenazi are not descendants of Israelites, but Khazars, allows antisemites plausible deniability by claiming that they only oppose “fake Jews” and “impostors” (as observed in Image 2).

Conspiracist and far-right actors online have also made direct reference to Koestler’s “The Thirteenth Tribe”. A convicted Holocaust denier from Germany referenced Koestler’s theory in a Bitchute video (Image 1), in which he speculated about a Jewish plan to build a “Heavenly Jerusalem” in Ukraine since most Jews were supposedly Khazars. 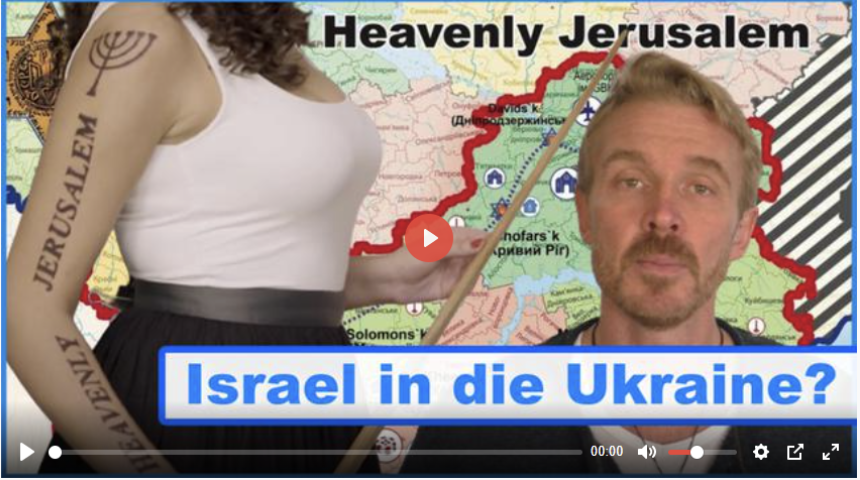 As Khazaria included large parts of contemporary Ukraine, including Russian-occupied Crimea, antisemitic conspiracy theories about the Khazar people have been applied to discussion of the ongoing Russia-Ukraine war in QAnon, Sovereigntist, and right-wing extremist Telegram channels.

One post making its way through such channels, for example, claims that the “Khazarian Mafia are the people we call Ukrainian Nazis nowadays” (see Image 2). The post also claims that the Russians knew the current war was the continuation of a conflict in the mid-8th century, when the Khazars tried to subjugate Russian tribes who rejected the Khazars’ love of drinking (preferably Russian) blood. It goes on to state that the Khazars were manipulating human DNA, possessed by demons, and destroyed the DNA of opposing tribes with biological weapons. The post also claims that once Russian invaders threaten to reveal proof of the Khazarian “demons”, Ukrainian “Khazars” will claim that they are being massacred to incite a global war against Russia. 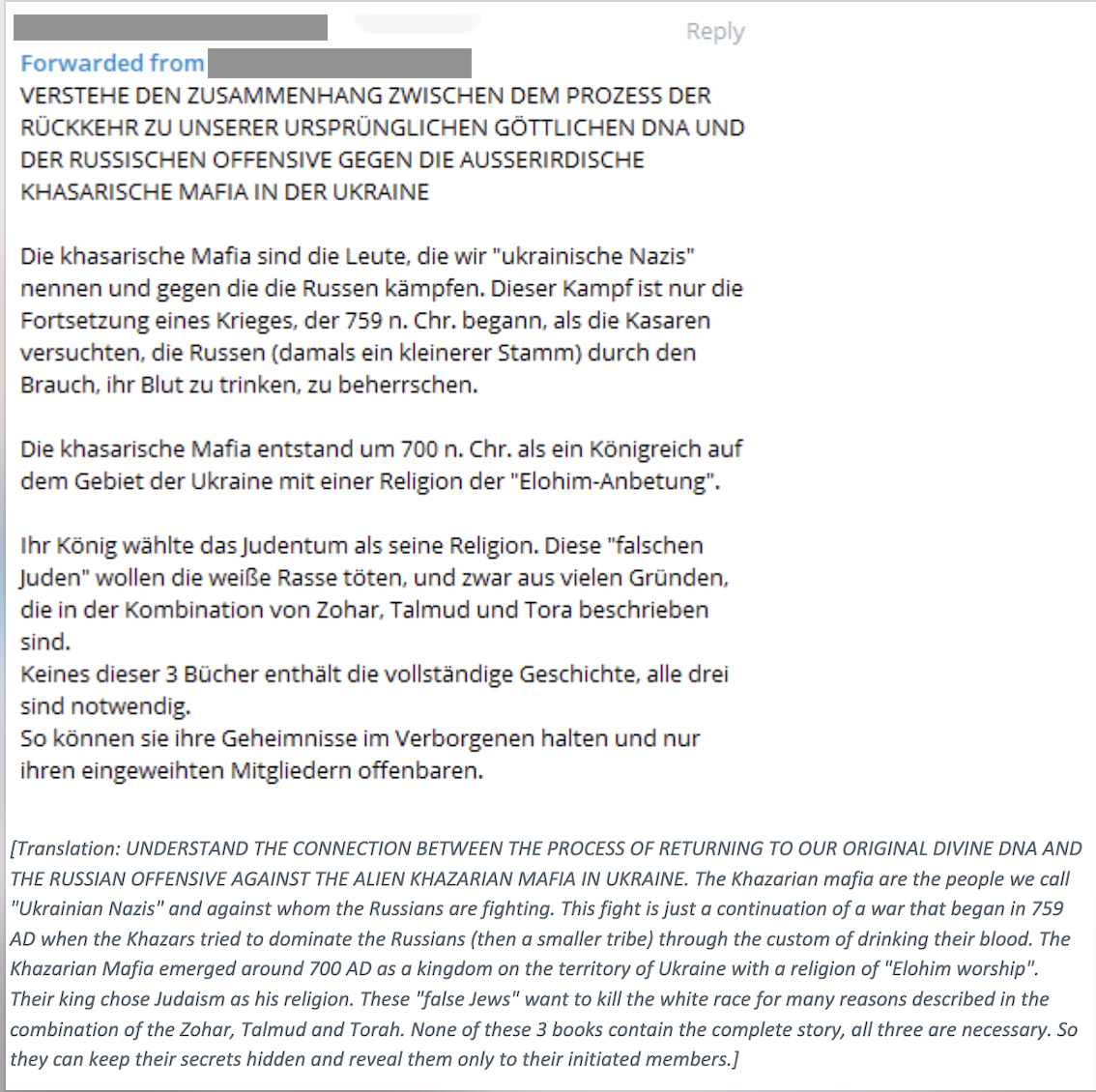 Image 2: Excerpt of a text claiming a link between the “Khazarian Mafia” and the Russian invasion.

Claims such as these draw on a variety of antisemitic stereotypes, including the blood libel myth and the age-old trope of Jewish plots against other nations, to allege that Ukraine is being governed by “fake” Jews.

Another “Khazar” theory about Ukraine circulating on Telegram stems from an article on a German website which has previously claimed the British Royal Family are reptiles. The article (Image 3) claims that even though the Rothschild family are Khazars and control the IMF, Putin has managed to keep Russia out of their control. It insists on the violent character of the Kharars, stating that while the “Khazarian Rothschilds” are supposedly working to destroy Christianity and establish a One World Government, the media coverage of the war in Ukraine is brainwashing people against Russia.

Another post on Telegram claims that Ukraine had been previously Khazaria and that its inhabitants had converted to Judaism in order participate in the slave trade. The simplified notion that Khazaria was only Ukraine, and the broader Khazar conspiracy, has also been interpreted by some to mean that Ukraine is the centre of a global cabal or Deep State. In one post (Image 4), a German neo-Nazi claimed that Western support for Ukraine stemmed from the fact that if Kyiv fell it would spell, “the end for the power structure that the Khazars – the pseudo-Jews of Rothschild – created in the past 80 years.” 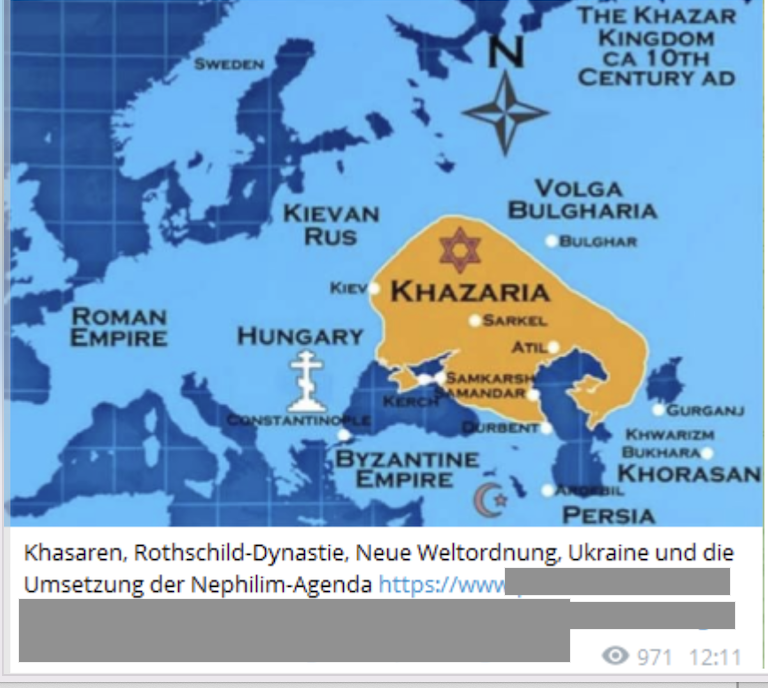 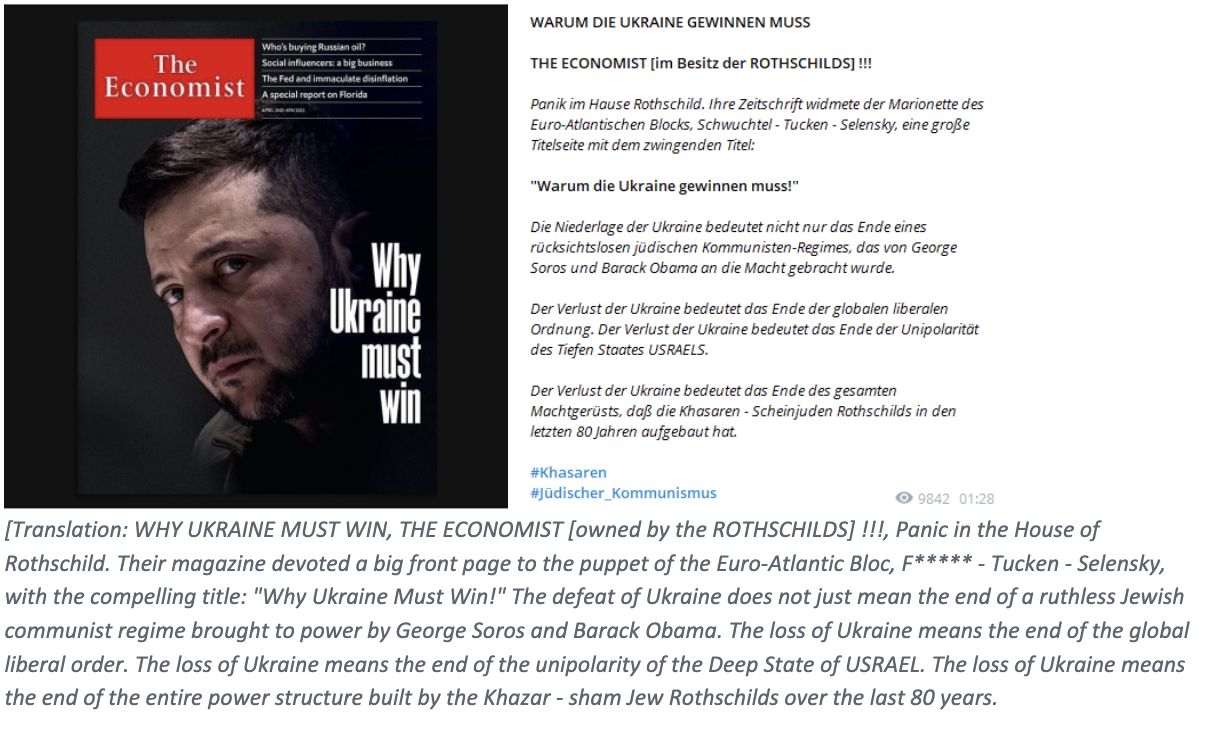 Image 4: Interpretation of a cover by the Economist by a German Neo-Nazi channel.

The war in Ukraine has produced copious pseudo-analysis of geopolitics, international law, and history that is steeped in conspiracist thinking and ideological biases rather than factual evidence. The invocation of the Khazarian Mafia conspiracy constitutes a particularly outlandish example of this.

The conspiracy theories about alleged Khazarian control of Ukraine are varied and often contradictory. Ultimately, however, they all seek to legitimise the Russian invasion through dehumanising Ukrainians and presenting war crimes committed by Russian forces as acceptable means to destroy the descendants of a “wicked” race.

As tends to be the case with antisemitic narratives, the Khazarian Mafia myth did not emerge with the war in Ukraine, and nor will it end with it. It will be adapted to the next great news story, posing as a pseudo-intellectual explanation for a major event that the mainstream media allegedly won’t broadcast.