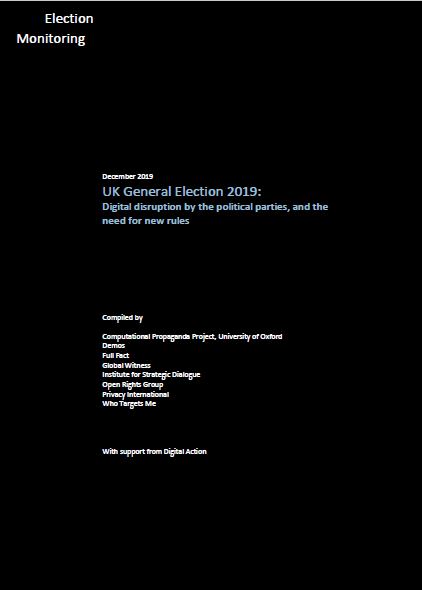 Evidence from the 2019 General Election shows that the need to overhaul the system of electoral administration has gone from urgent to critical.

It has been nearly two decades since the UK’s electoral laws were last updated. In those twenty years the internet has fundamentally changed political campaigning. The Information Commissioner’s Office, the Electoral Commission and parliamentarians on the DCMS Select Committee have in the past few years recognised that the current UK electoral regulatory framework is no longer fit for purpose in countering digital threats to democracy. Yet Government has failed to prioritise reform.

This briefing brings together the findings of a group of eight organisations who monitored the UK’s digital landscape leading up to the General Election. The examples given are a partial snapshot of what happened, given the limited data available to civil society, journalists and researchers. Yet the evidence that there is demonstrates that social media and other communications technologies enable and in some cases incentivise problematic behaviour by political parties and other interests when they are unconstrained by regulation.