The Sovereign Citizens movement comprises a highly heterogenous anti-government ideology that originated in the United States. Adherents are united in their belief that the U.S. government illegitimately rules over them. They live under the assumption that by declaring themselves sovereign, they are not obliged to abide with government legislation.

While it is an ideology that has manifested in many different forms, contemporary interpretations are frequently linked to conspiratorial and extremist beliefs. U.S. law enforcement agencies have labelled the movement a domestic terrorist threat. In recent years, anti-government sentiments in relation to imposed COVID-19 measures triggered a surge in popularity of Sovereign Citizens-related ideas in many national contexts. The Southern Poverty Law Center estimates there are around 300,000 followers of Sovereign Citizen ideology in the U.S. 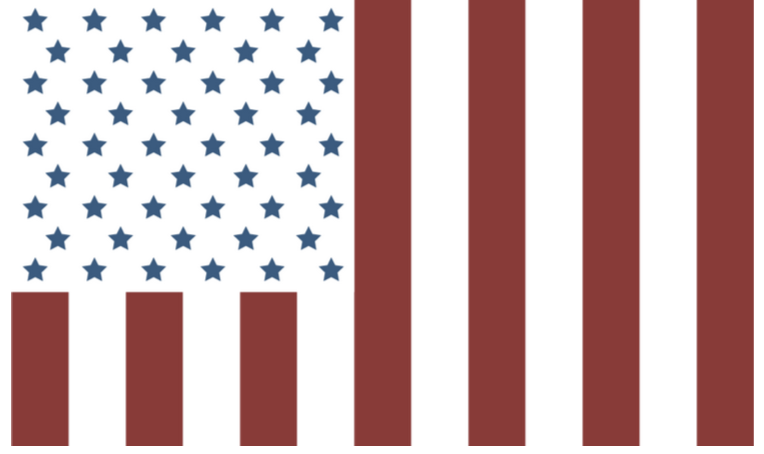 Sovereign Citizens sometimes use variations on the official American flag like this one, referring to it as the ‘flag of peace’ or the ‘civil flag’.

Sovereign Citizen ideology has its roots in a white supremacist Christian group from the early 70s called Posse Comitatus (‘power of the country’). William Potter Gale, a racist and antisemitic political activist, established the anti-government group under the impression that government institutions were undermining the rights of white citizens.

Posse members believed that U.S. counties and their sheriffs formed the highest U.S. authority and were responsible for protecting citizens from the wrongdoings of the federal government. Gale and his followers believed that ‘common law’ (based on interpretations of the Bible), as opposed to federal law, provided the only true legislative code for U.S. citizens.

Throughout the 70s and 80s, Posse charters across the U.S. rebelled against the federal government by refusing to pay taxes or to obtain drivers’ licenses and by evading bureaucratic regulations. Members were primarily involved in what has been labelled ‘paper terrorism’, which consisted of filing all kinds of false paperwork against government officials and institutions which could damage opponents. These tactics formed a primary source of inspiration for contemporary Sovereign Citizen ideologues.

The Posse’s role had become marginal by the 1990s, but it had laid the foundation for the growth of the Sovereign Citizens movement into an ideologically pluriform range of groups in the United States and beyond. Recently, Sovereign Citizen beliefs experienced a surge of popularity due to their shared anti-governmental attitude with antivaxx and anti-lockdown organizations.

Sovereign Citizen ideology is grounded in a conspiracy which purports that the U.S. government illegitimately rules over the American people. Sovereign Citizens tend to believe that the government, originally set up by the Founding Fathers under a common-law legal system, was secretly replaced by a federal ‘corporate’ government based on a maritime law. This shift is alleged to have happened during either the American Civil War (1861-65), or when the U.S. abandoned the gold standard in 1933.

A starting point for the movement’s alternate understanding of history is the 14th amendment, which guaranteed citizenship to slaves freed after the Civil War. It was ratified in 1868 and granted citizenship to all persons born or naturalized in the U.S. Sovereign Citizens typically interpret the amendment as legislation that created a form of second-class ‘federal’ citizenship, distinct from ‘original’ state citizens. They commonly believe the government lures people into this federal type of citizenship through bureaucratic means such as Social Security numbers, drivers’ licenses, ZIP-codes and other types of documentation. As such, they allege that the U.S. government tricks citizens into a contractual relationship to deliberately deny them their rights as sovereigns.

Some Sovereign Citizens are convinced that the U.S. government uses its citizens as collateral, setting up corporate trusts in citizens’ names which it funds with vast sums of money. The purpose of this, they allege, is so that the government can bring all citizens under its control.

This theory claims that the U.S. government sets up a corporate entity in a person’s name when they are born, creating two separate identities. The corporate identities – so-called ‘strawmen’ – allegedly coexist alongside people’s ‘flesh and blood’ personas. Sovereigns assume it is only this corporate identity which is subject to government legislation. It is typically believed that this strawman can be identified through the government’s use of capital letters on legal documentation: when names are written in uppercase letters (JOHN DOE) on birth certificates, tax documents or car registration, this supposedly indicates an individual’s strawman – or corporate identity – is addressed.

Sovereigns believe that people can revoke or opt out of their contractual relationship with the government by employing certain tactics. They may, for example, sign documents using variations of their names, use punctuation, different spelling, or use red ink. Other strategies include avoiding the use of ZIP-codes or addresses, carrying custom-made driver’ licenses and car license plates. To their belief these tactics acquit them from the obligation to abide with U.S. federal and state laws, and the tax system.

Example of a license plate used by Sovereign Citizens.

While loosely affiliated groups of Sovereign Citizens do exist, they generally operate at the individual level. People ascribe to Sovereign Citizens ideology for (combinations of) various reasons. A major share seems to be driven by strong anti-governmental convictions and to seek ways to escape state authority. It may also serve as a way out of financial problems and provide an appealing opportunity to earn easy money.

Sovereigns may organize and attend seminars during which they discuss strategies and tactics to attain sovereignty and deal with government institutions. They employ a range of tactics to substantiate their claim to sovereignty. Hundreds of websites can easily be found online, containing guidelines and pseudo-legal documents that ‘sovereigns’ can use to defend their position against state entities. Many record their encounters with law enforcement officials, in which they refuse to cooperate and use pseudo-legal jargon to exonerate themselves from abiding with the law.

Tax protest and financial schemes form an important part of Sovereign Citizens’ acts of resistance. One of such practices is known as the ‘redemption scheme’. It rests on the assumption that the U.S. government uses its citizens as collateral to pay off foreign debts.

According to this theory, the government uses people’s strawmen identities to set up secret trusts in their names that hold hundreds and thousands of dollars. Some Sovereign Citizens believe that by filing certain IRS forms or by signing bills and tax forms with notices like “Accepted for Value”, they can access and spend the money in their secret account. Other financial schemes include efforts aimed at evading state and federal income taxes, hiding assets or eliminating debts. Most of these activities are considered fraudulent and result in bank, tax or wire fraud charges.

They typically engage in ‘paper terrorism’. In the aim to damage the functioning of government institutions, to intimidate public officials or simply to win lawsuits against them, they flood opponents with pseudo-legal paperwork. Sovereign Citizens file false property liens against public officials that may result in financial damage. This form of activity may disrupt the functioning of government institutions, given the time consuming and costly procedures it takes to process and respond to these large amounts of paperwork.

There is continuing ideological spillover between extremist groups, QAnon-conspiracy theorists, and Sovereign Citizens belief systems. In online communities, conspiracist and far-right groups mobilized around anti-lockdown activism have been observed to adopt strategies and terminology from the Sovereign Citizens playbook. In many online anti-lockdown communities, for example, members discuss their ambition of holding public officials accountable for their actions during the pandemic in common-law public courts.

There have also been attempts to organize civilian security forces. Examples of this include participants of the ‘Freedom Convoy’ in Ottawa at the beginning of 2022, and anti-lockdown activists in the UK. Among those on trial in relation to their involvement in the January 6 Capitol Riots, several individuals have identified themselves as Sovereign Citizens. Their participation in the storming of the Capitol illustrates the link between extremism, Sovereign Citizen ideology and broader anti-government conspiratorial belief systems.

While Sovereign Citizens ideology is not inherently harmful, it may provide fertile ground for extremists and conspiracy theorists to mobilize and resort to real-world violence or other types of behavior.

Terry Nichols, who was an accomplice in the 1995 Oklahoma City bombing of a federal building that killed 168 and injured hundreds, was driven by strong anti-governmental beliefs and adhered to Sovereign Citizen ideology. He is currently serving a life sentence without parole for his involvement in the planning and organization of the attack.

In May 2010, two Sovereign Citizen adherents killed two policemen after they were pulled over in a traffic stop. The perpetrators were father and son Jerry and Joe Kane, who travelled the country to give seminars on strategies to circumvent tax regulation and advise on how to deal with government agencies. Both suspects were killed after a police chase. 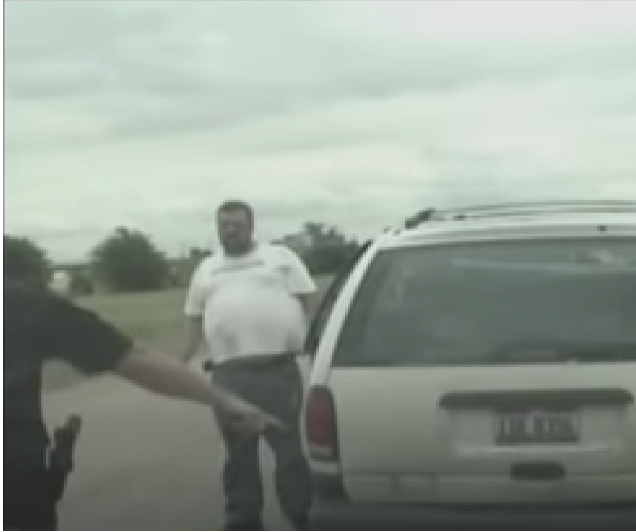 Still from the dashcam recording showing one of the officers in with Jerry Kane, minutes before his son opened fire with an AK-47 killing the two cops.

In August 2013, police arrested two Sovereign Citizen adherents from Nevada after a months-long undercover investigation. The pair allegedly conspired to abduct police officers, hold them in custody and put them on trial in a common-law court. According to the police, they were plotting to torture and execute them. They were convicted to a five-year and one-year probation sentence, after the prosecutors dropped conspiracy to commit murder and kidnapping charges.

While the Sovereign Citizen movement has its roots in the U.S., ideologically related groups and organizations have gained traction across other contexts, such as Canada, Australia, New Zealand and multiple European countries. Antivaxx and anti-lockdown activists have embraced Sovereign Citizen beliefs and use similar pseudo-legal resources to exempt themselves from government imposed COVID-19 measures.

In Canada, QAnon influencer and Sovereign Citizen ideologue Romana Didulo crowned herself as ‘Queen of the Kingdom of Canada’ in an act of resistance against imposed COVID-19 measures in her country. Through Telegram, she attempts to motivate her sixty thousand followers to disobey the authority of the Canadian state. In December 2021, Didulo was detained after she encouraged the Canadian armed forces to shoot and kill health professionals who tried to vaccinate children against COVID-19. In August 2022, around thirty protesters responded to a call to perform ‘citizen’s arrests’ on police personnel. Ater scuffles with law enforcement agents in front of the police station in Peterborough, four activists were arrested.

The German Sovereign Citizens equivalent, so-called ‘Reichsbürger’, do not recognize the current German Federal Republic but instead maintain that the German Reich, which existed from 1871 – 1945, is the only legitimate state. In April 2022, four members of a Reichsbürger organization were arrested for plotting to overthrow the government, destroying electrical facilities to create civil war-like conditions and to kidnap the German health minister. They were charged with preparing violent acts that endanger the state and violating Germany’s weapons act.

Conspiracy Theorists are Creating Their own Nation | Decade of Hate – Vice 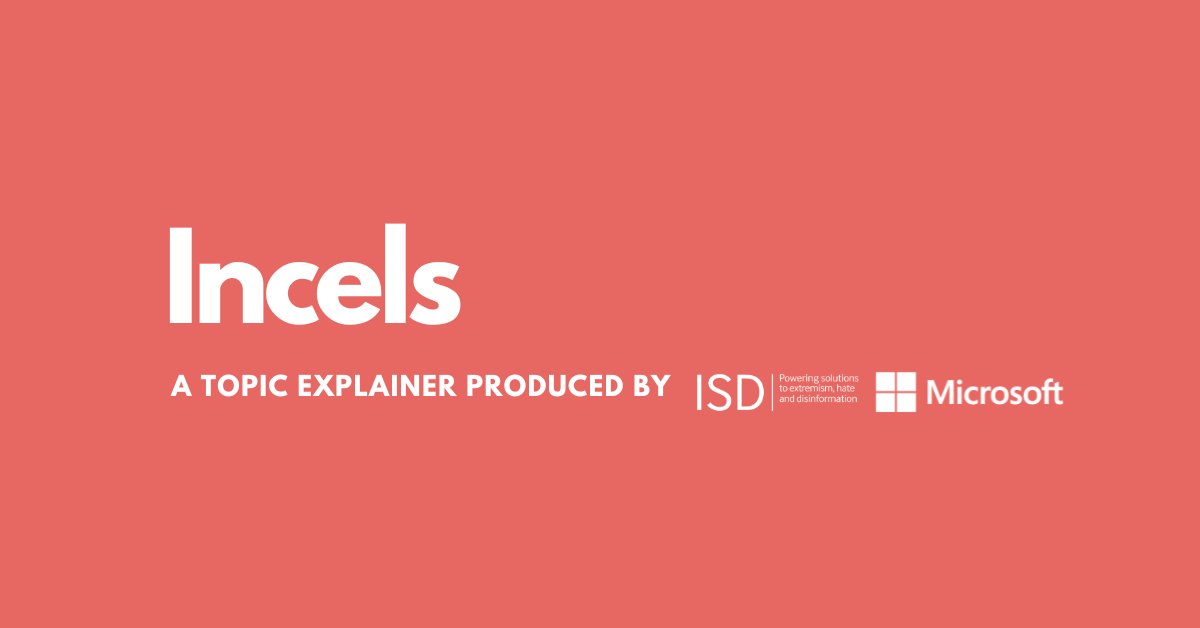 An Incel ("involuntary celibate") is a member of an online subculture of people whose sense of identity is forged around a perceived inability to form sexual or romantic relationships. Incel ideology is violent, rooted in the hatred of women, and forms part of what has been dubbed the “manosphere”.

The “manosphere” is an umbrella term that refers to a number of interconnected misogynistic communities. This ISD Explainer explores the more extreme and divisive proponents of these online communities.

The 'New World Order' conspiracy theory argues that a shadowy elite force is trying to implement a totalitarian world government.