The Groyper movement is a loose network of white nationalist activists and internet trolls who gravitate around several key online influencers. Their goal is to push and normalize white nationalist ideas within mainstream conservatism.

Who are the Groypers?

Self-named after the ‘Groyper’ toad image, which became popular as an explicitly racist-coded variation of the Pepe the Frog meme often affiliated with the ‘alt-right’, the Groypers emerged offline as a movement in 2019 and followed the decline of the alt-right. Initially followers of the ‘America First’ podcast host Nick Fuentes, they describe themselves as ‘American nationalists‘ and hold similar beliefs to the alt-right.

Groypers represent a new momentum within American white nationalism. They have a particular focus on capturing members of Generation Z, and in portraying themselves as American Christian nationalists, hope to attract disaffected conservatives by exploiting schisms and grievances within mainstream conservatism. 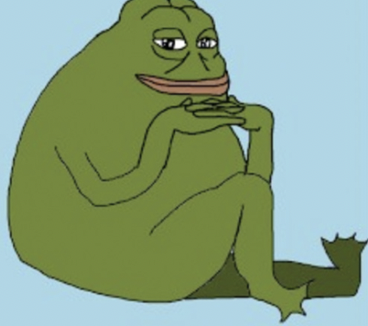 What are their beliefs?

Groypers – also known as the ‘Groyper Army’ – are opposed to liberal values, feminism, LQBTQ+ rights and progressive ideology, believing that shifting racial and cultural demographics present an existential threat to white European-American identity and culture. In a bid to disassociate themselves with the failures of the altright, Groypers have attempted to align themselves and their beliefs with Christianity and traditional ‘Christian’ values.

Groypers are fixated on immigration and want the US to close its borders to prevent the further influx of those they believe are likely to boost the Democratic vote. Groypers regard the broader mainstream conservative movement as weak and unwilling to confront such changes, and refer to it as ‘Conservative Inc.’. By ignoring topics such as demographics and traditional family values (i.e. which they perceive as acceptance of LGBTQ+ persons) Groypers believe mainstream conservatives have sold out to the left on the culture war front and therefore need to be dragged back to the right.

A holocaust denier and former YouTuber, Nick Fuentes is the host of the ‘America First’ podcast and considered to be the leader of the Groypers. Fuentes first rose to prominence when he left Boston University after he reported receiving threats in response to his attendance at the 2017 Charlottesville Unite the Right Rally. He went on to establish the America First Political Action Conference (AFPAC), a rival to the annual Conservative Political Action Conference (CPAC).

Patrick Casey is the former leader of the American Identity Movement (formerly Identity Evropa), a white supremacist organization disbanded in November 2020. In February 2021 Casey split from the Groyper movement over the fear of federal informant infiltration.

Michelle Malkin is a conservative political commentator and self-described “mommy” of the Groypers. The former Fox contributor, who joined Newsmax TV in May 2021, has spoken at America First events.

Jacob Lloyd is a former YouTuber and Infowars contributor. He spoke at the Groyper Leadership Summit in 2019 and claims to have had a leading role in formulating the questions asked by Groypers at conservative events.

Real name Anthime Gionet, Baked Alaska is a neo-Nazi live streamer and Groyper follower who was arrested for his role in storming the US Capitol building on January 6 2021. During the riot, he wore Pit Viper sunglasses, which have since been adopted as a symbol by the Groypers.

Vincent James is a former YouTuber with the second-highest following of the Groypers on Telegram after Fuentes, with over 41,400 users following his channel. He has also spoken at AFPAC events.

One clear line from the alt-right to the Groypers is their use of irony to hide and when necessary deny their white nationalist viewpoints. The best evidence of this poisoned irony is the Groyper’s toad emblem. The smug, unfit and cartoonish character of the Groyper makes Fuentes’ white nationalism seem transgressive and silly, which in turn increases its appeal.

During a series of campus speaking engagements in 2019, Turning Point USA (TPUSA) founder and leader Charlie Kirk, as well as his guests which included Donald Trump Jr. and Rep. Dan Crenshaw found themselves being heckled and asked uncomfortable, trollish questions by Groypers who had coordinated to pack the lines at the TPUSA event. Groypers would ask speakers loaded questions in an attempt to shine a light on Conservative, Inc.’s supposed hypocrisy, while also adding the Groyper notoriety and providing it with material to use in memes and propaganda. Topics included immigration, homosexuality and the US relationship with Israel, often referencing antisemitic dogwhistles such as questions about the USS Liberty incident or the “dancing Israelis” conspiracy theory.

The Groypers have made a point of repeatedly showing up at major Conservative Political Action Conference (CPAC) events – despite being banned – and organizing their own nearby alternatives. In July 2021, Fuentes crashed CPAC in Texas alongside a number of followers chanting “America First” and “White Boy Summer”. The group was filmed harassing a reporter before being removed. Fuentes and a number of Groypers had also attempted to gain entry during the Florida CPAC that February. The gatecrashing of CPAC events is a tactic deployed by the Groypers to increase visibility and gain supporters from those attending mainstream conservative events.

College campuses have been a battleground for the far-right since early in the alt-right’s ascendancy. Despite the alt-right’s fracturing, college campuses remain targeted by the far-right. According to the ADL 2019 saw a doubling of white nationalist propaganda on campuses. Drawing on this success, one Groyper, Jaden McNeil, started his own student group at Kansas University called American First Students.

Several Groyper influencers have migrated to other platforms like Gab or Telegram. For example, Fuentes has over 125,000 followers on Gab and over 41,900 subscribers on Telegram. Supporters can also donate to America First or Fuentes on their official websites by buying branded merchandise. In October 2021, the Groypers launched their own streaming service ‘cozy.tv’, where followers can watch shows by Fuentes, Vincent James and Jaden McNeil.

In January 2020 Samuel Gulick, an 18-year-old who frequently posted content shared by members of the Groyper and America First movements, was arrested and charged by federal authorities for carrying out an arson attack on a Planned Parenthood clinic in Delaware.

Although Fuentes has stressed the need for the Groypers to separate themselves from white nationalists who use violent rhetoric, two days before the Capitol Hill riot he raised the issue of killing state lawmakers, before quickly backtracking his comments on his America First show.

Fuentes later attended the January 6th protests, and although he did not enter the Capitol he described the riot as “awesome”. Supporters with America First merchandise were seen both at the rally and inside the building.

January 6th ‘Stop the Steal’ organiser Ali Alexander collaborated with Fuentes in the run-up to the rally, seeing his ability to mobilise the Groypers as an asset. The neo-Nazi and Groyper follower ‘Baked Alaska’ live-streamed his attendance at the rally, and was later arrested and charged for breaching the Capitol building.

The Groyper movement does not represent a new thematic approach by the far-right. Rather, it is a continuation of some of the key themes commonly seen throughout the far-right’s history in the United States. Namely, these are that America will soon be overrun by immigrants and other ‘lesser’ cultures, that traditional family values are dying out and that right-wing pundits and politicians have, by and large, sold America out. The only solution is for ‘true conservatives’ to reclaim the system from the inside.

What distinguishes the Groypers is their tech savviness and natural comfort with using the web as a means to recruit and distribute memes and propaganda. While it is undoubtedly a positive thing that Fuentes, Casey and co. have been repeatedly de-platformed their willingness to use any and all sites to distribute their message, coupled with their transgressive approach, means that they represent a potent challenge.

Pit Viper sunglasses were first associated with the Groypers on 6 January 2021, when Baked Alaska (see Key Figures) wore them during the US Capitol riot, which he livestreamed on Twitch. In July 2021, Nick Fuentes and others wore Pit Viper shades when they crashed a CPAC event in Dallas.

Groypers derive their name from the ‘Groyper’ toad image, which became popular in 2017 as an explicitly racist-coded variation of the Pepe the Frog meme often affiliated with the alt-right.

The following sources were used to inform the contents of this document and are recommended for further reading. 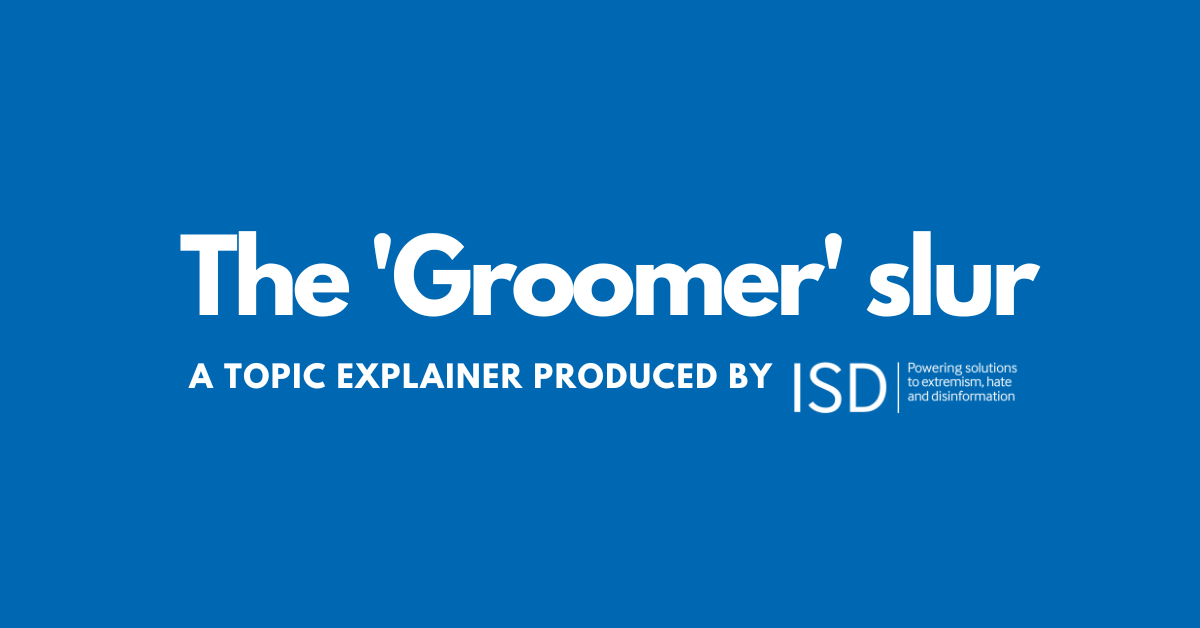 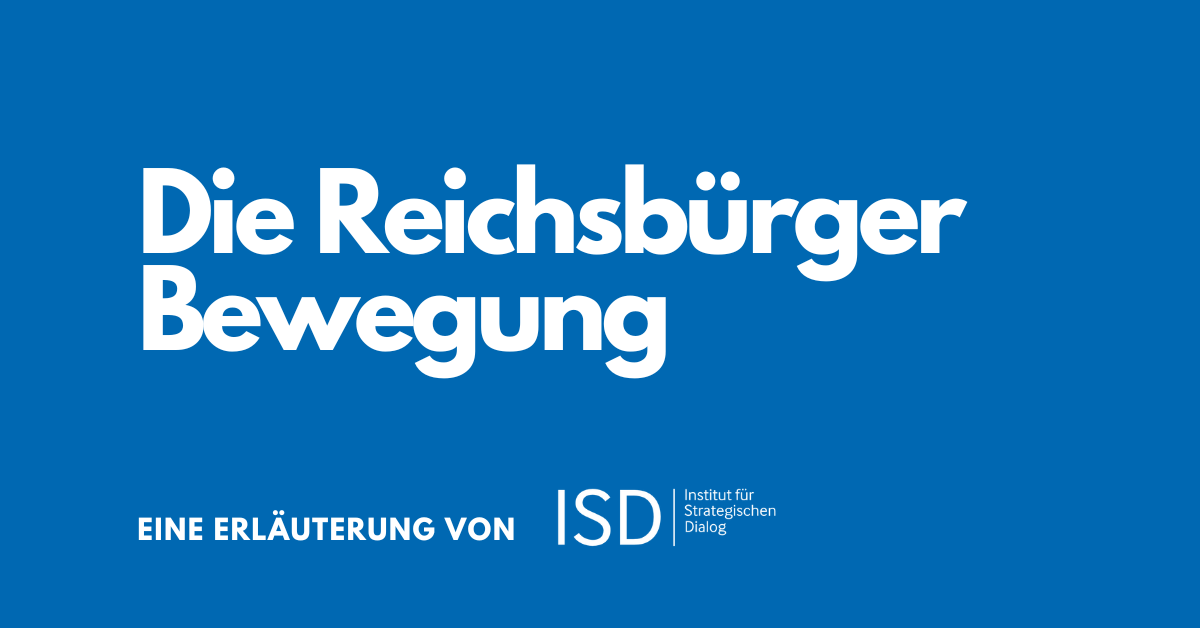 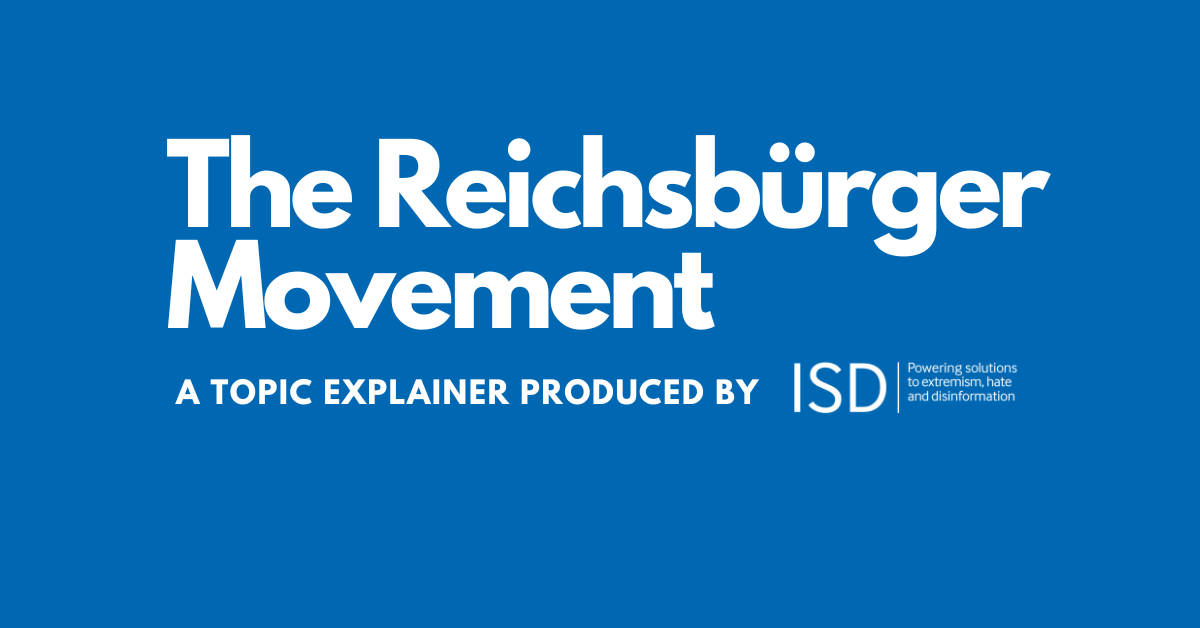 The Reichsbürger movement is a German conspiracy movement similar to Sovereign Citizens, claiming that the German state is illegitimate and must be resisted.