With the eyes of the world focused on Russian propaganda about the conflict in Ukraine, ISD has discovered that Twitter accounts aligned with the Chinese Communist Party (CCP) that appear to be inauthentic are also spreading and amplifying disinformation about the war. What’s more, official CCP accounts are retweeting them.

Amidst Russia’s invasion of Ukraine, social media platforms have been strengthening their defences against the influence of state-controlled media and the disinformation narratives propagated by them. While most Russian state-controlled media accounts are blocked from major social media platforms in the UK and EU, a network of 84 seemingly fake pro-CCP Twitter accounts is spreading content about the war in Ukraine in defence of Russia. Accounts belonging to Chinese officials and diplomats have been amplifying these posts to a combined audience of over 318,000 followers on Twitter.

This Dispatch explores this disinformation and propaganda operation by qualitatively analysing the narratives promoted by the network about the war in Ukraine. We also examine the strategies used by the network to amplify its posts, as well as how official CCP accounts engage with the accounts.

A network of seemingly fake pro-CCP accounts on Twitter has been amplifying Russia’s talking points about Ukraine. Our analysis of the network’s activity revealed:

In the past year, ISD has identified and collected a list of almost 200 accounts that have spread pro-CCP narratives in a coordinated way, dubbed the ‘pro-CCP network’. The activity and content of the network resembles that of another pro-CCP network dubbed Spamouflage, which was first identified by Graphika in 2019.

One of the most obvious signs the network is comprised of fake accounts is that they all have stock images as their profile pictures. Some even have the same profile picture as accounts that belonged to Spamouflage and have been removed by Twitter. The content spread by these accounts is mostly propaganda videos explaining current events with a pro-CCP slant in English, with both English and Chinese subtitles.

Our analysis shows the network had increasingly turned its attention to Ukraine even before the invasion. An analysis of mentions of the word ‘Ukraine’, as displayed in the graph below, shows an increase in mentions of Ukraine in tweets posted by the network from 13 February, 11 days prior to the invasion. This is then followed by a series of spikes beginning on 20 February. Of the almost 200 accounts in the network, 84 mentioned Ukraine 1,437 times in the last three months. Of these 84 accounts, only 13 (referred to hereafter as the ‘core’ network) posted original tweets; the rest mentioned Ukraine only in replies and/or retweets. 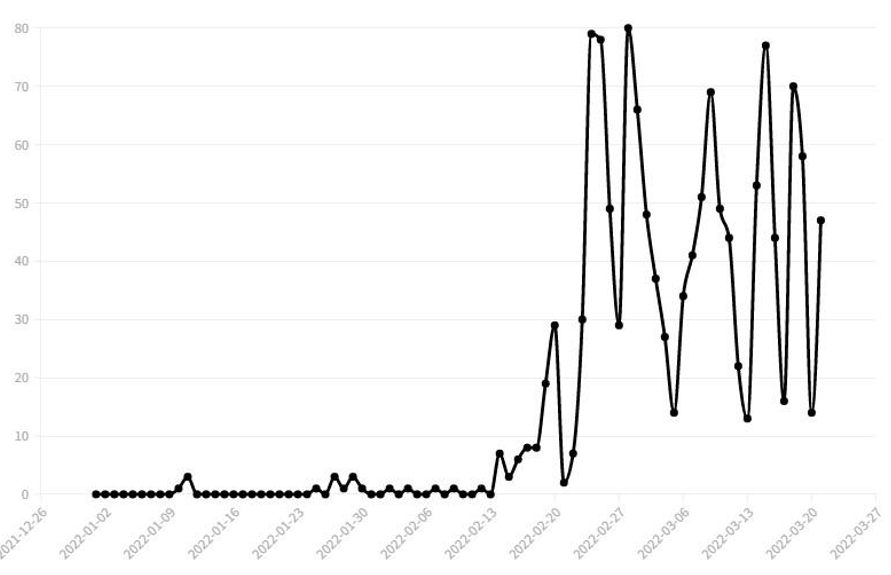 Our analysis of network coordination on Twitter also looks at the timestamps of when tweets are posted. Most of the tweets mentioning Ukraine were posted between 9am and 5pm in Beijing, China (1am and 9am GMT). Although this is not a definite indication that the accounts are based in China, the timestamps of activity correspond with those identified in other pro-CCP networks. 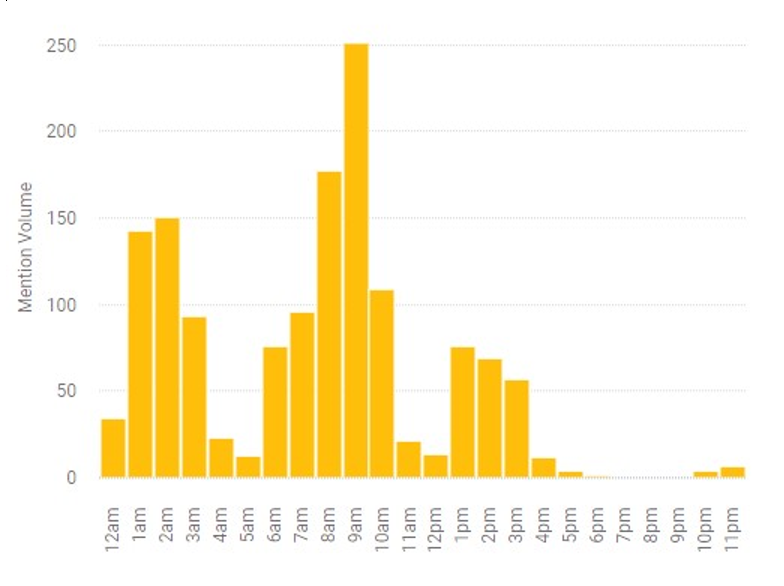 We used the Hamilton 2.0 dashboard, an open-source tool that enables disinformation researchers to monitor narratives and topics promoted by state officials and state media, to assess the role of Chinese state officials in amplifying the content posted by the pro-CCP network. To do so we searched for the word ‘Ukraine’ alongside the Twitter handles of the 13 ‘core’ accounts that posted original tweets. 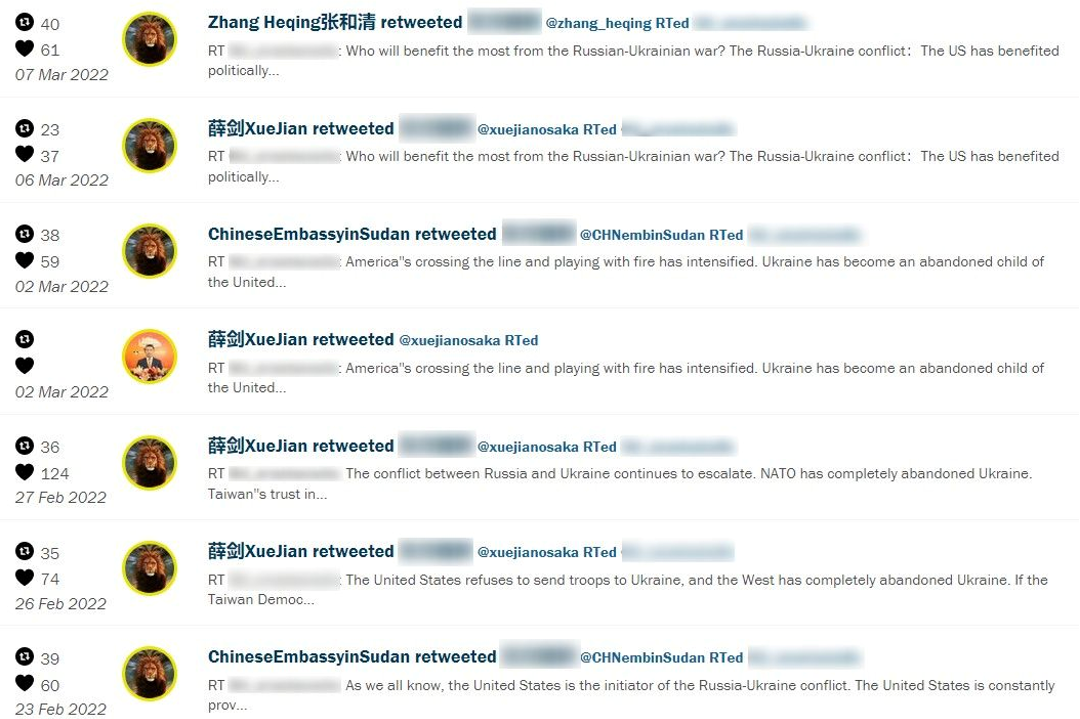 Image 3: Some of the posts by one of the core accounts retweeted by Chinese state officials.

The narratives and their amplification

1. The US provoked Russia

From mid-February, some of the pro-CCP accounts shared videos about Ukraine on a daily basis. Video has consistently proven to be the preferred medium for Chinese information operations and has been used extensively throughout campaigns involving the Spamouflage network. In this context, videos parroted CCP talking points on the pre-conditions of the invasion, in particular accusing the US of “hyping” the Russia-Ukraine war and accusing the US of a lack of understanding of China-Russia relations. A video by one of the accounts in the network on 19 February (image 4) directly reflects this narrative and was retweeted by Chinese government officials including the Consul General of China in Perth, Australia and Zhang Heqing.

Seven accounts in the network commented in support and retweeted this video in a seemingly coordinated way, with all of this activity occurring in a 3-minute window between 9.12am and 9.15am GMT. Four of these 7 accounts that engaged with the video were created on the same day – 30 December 2021 (and two within the same minute) – and a further two on 7 December 2021. 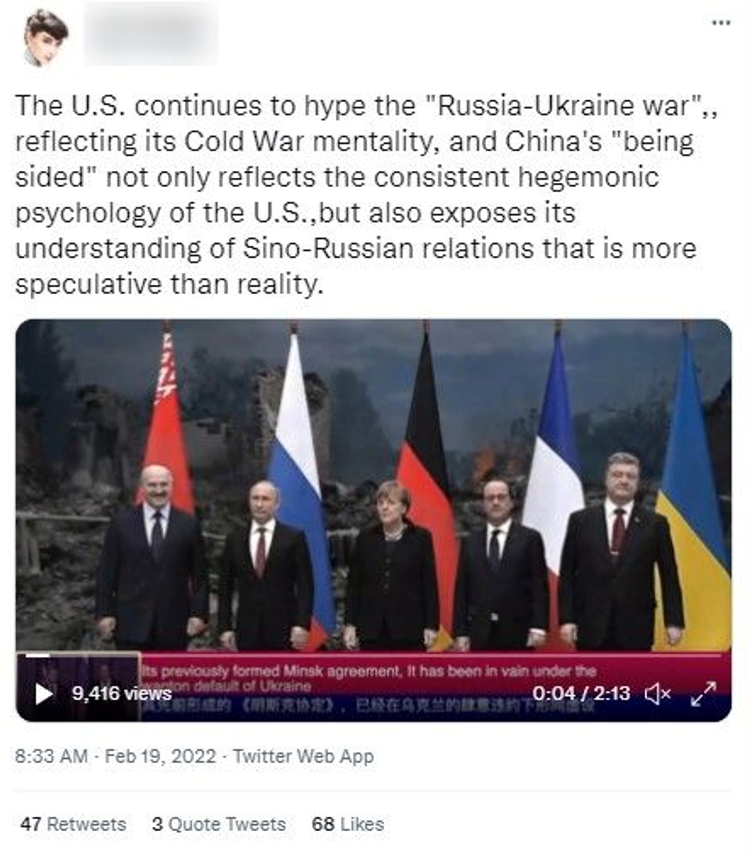 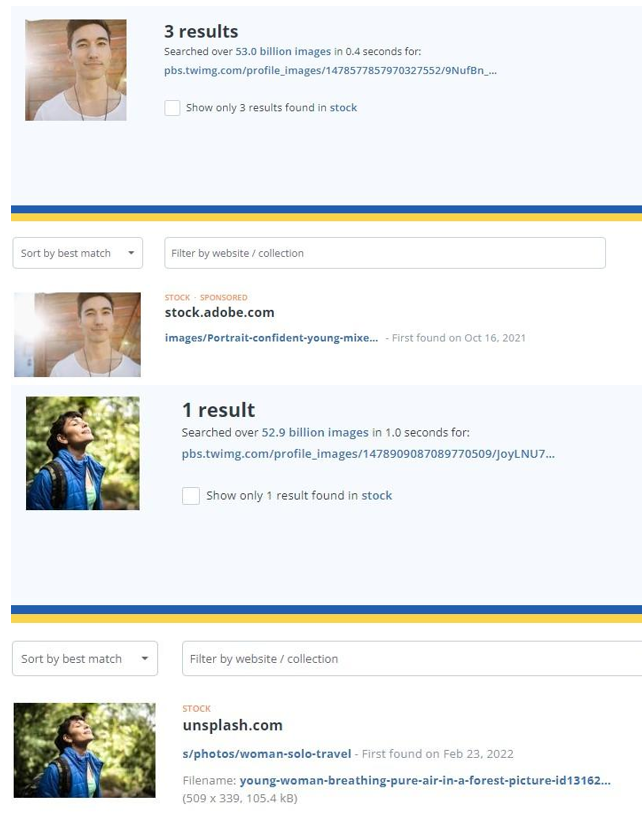 Image 5: A reverse image search for the profile pictures of the accounts above reveals that all of them use stock pictures in their profiles.

At 8.30am GMT on the first day of the invasion, the most popular video posted by the network was about NATO encroaching on Russia’s border. It included the comment: “#Russia and #Ukraine have exchanged fire. The root cause of the war is #NATO’s broken promises and constant approach to Russia’s borders! It is time for the international community to unite and work together to solve [sic]”.

Another set of 8 accounts posted supportive comments on the video in rapid succession. All of these accounts used stock images as profile pictures and were created in batches, typically between 10am and 12pm in Beijing (2am and 4am GMT). 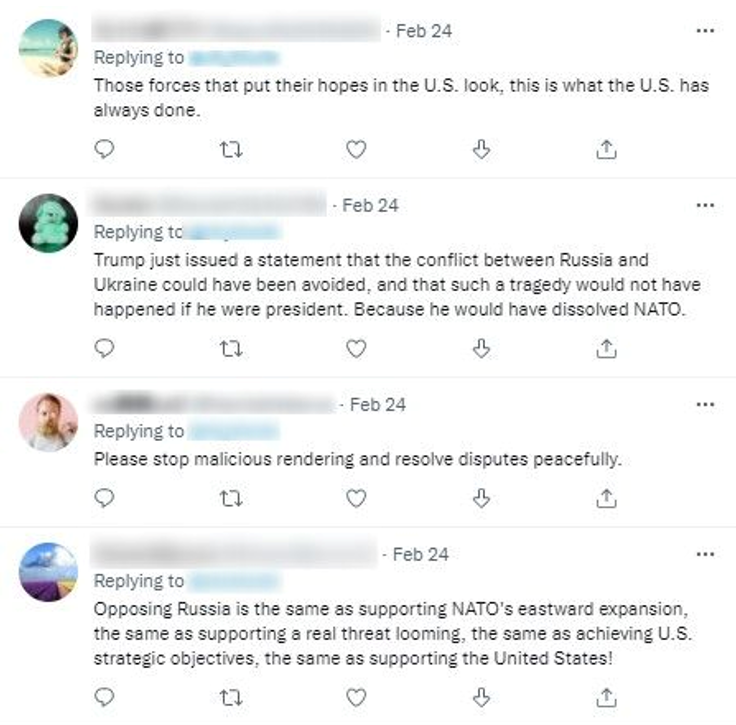 Image 6: Comments supporting the pro-Russia narrative made by accounts suspected of being fake.

As well as blaming the West, the network also took advantage of the invasion to send a clear message to the Taiwanese government and people, claiming that neither NATO nor the US would help them in the case of a “reunification” with China. The text accompanying one video read, “NATO abandons Ukraine, the DPP [Democratic Progressive Party] is doomed to repeat the same mistakes. Taiwan is a part of China’s territory and is not an independent sovereign state either in fact or in law, and it is an unstoppable historical trend for China to achieve reunification”. This specific video was retweeted by Chinese diplomats stationed in South Africa, New Zealand, Japan and Australia who have a combined audience of 44,680 followers.

A slightly edited version of the video was posted by a different account with the comment: “The United States refuses to send troops to Ukraine, and the West has completely abandoned Ukraine. If the Taiwan Democratic Progressive Party cannot see the truth, it will eventually repeat the same mistakes. #RussiaUkraineWar #TaiwanIsNext”. 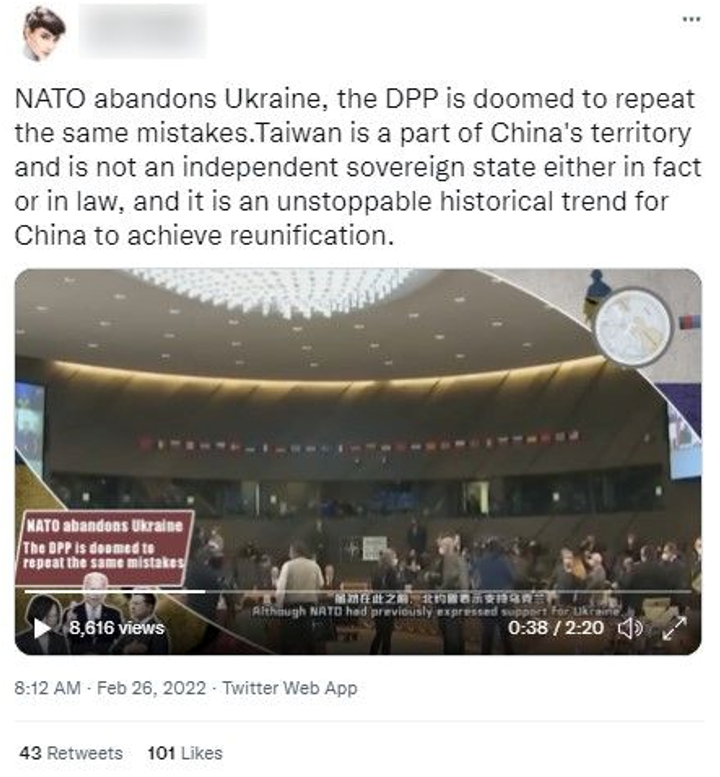 3. The US benefits politically and economically from the war

Other videos spread by the network in March claimed that the US would be the major beneficiary of the war. A video posted on 6 March was accompanied by the comment, “Who will benefit the most from the Russian-Ukrainian war? The Russia-Ukraine conflict: The US has benefited politically and economically, but its image and credit have been devalued”. The video accuses the US of spreading “false information about the Russian invasion of Ukraine” to escalate the conflict in order to ultimately benefit from it.

This post was retweeted by Chinese state officials including Zhang Heqing, and the Consul General of China in Osaka. 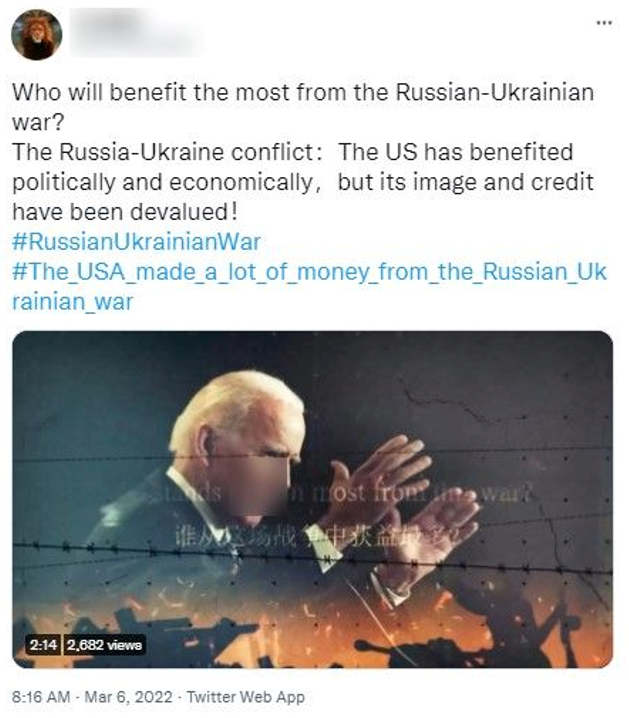 Image 8: A video posted on 6 March claims the US will be the main beneficiary from the war in Ukraine.

4. US Biolabs and COVID-19 conspiracies

Another widespread narrative amplified by the network was the conspiracy theory that the US has been creating biological weapons in Ukraine. On 18 March, an account posted a video echoing Russia’s claims and referring to the US as “the devil that destroys mankind” and accusing it of “shameless slander of Russia”. The tweet was retweeted 84 times, including by accounts that showed signs of coordination and inauthenticity. Thirty of the accounts that retweeted the post had strikingly similar bios, along with stock images as their profile pictures.

The bios of these accounts follow the same formulaic structure of short sentences of nouns and qualifiers in sequence, e.g. “Web specialist. Food practitioner. Devoted problem solver. Music fanatic. Bacon scholar”, much like most Twitter bios. However, one account seems to have included the instructions on writing a bio as their bio. It reads “Type in your bio…section [sic] & put the words that can aptly reflect your business”, suggesting the accounts were created using a specific template.

Half of these 30 accounts were created in March 2022 and half in December 2021, suggesting that they may have been created in bulk. 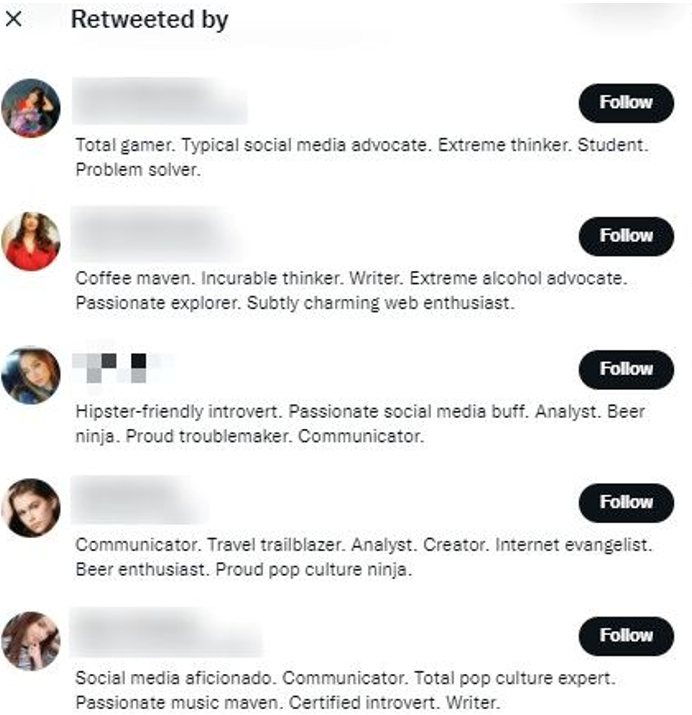 Image 9: Bios of the accounts who retweeted a video echoing Russia’s claims of the existence of American biolabs in Ukraine. 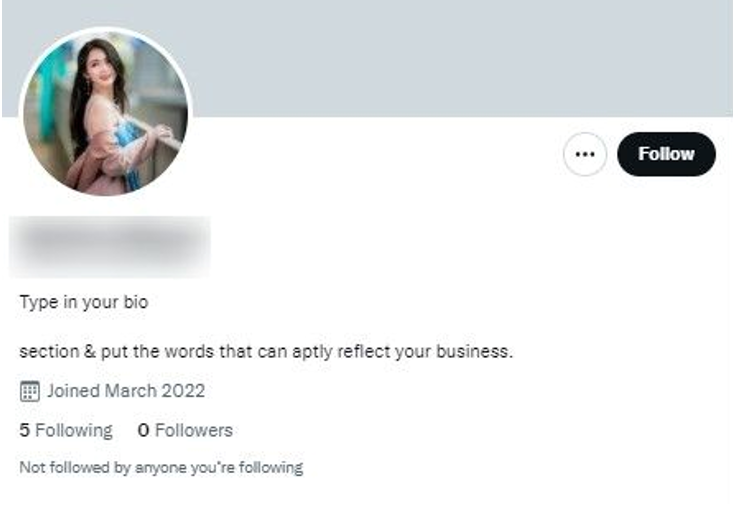 Image 10: The bio of the account includes directions on how to fill in a bio.

Another video referring to “US biolabs in Ukraine” posted on the same day as the video above was similarly amplified by inauthentic accounts, this time echoing COVID-19 conspiracies. Most of the comments were posted in succession between 9.30am and 9.45am GMT. All reflected the same narrative: accusing the US of creating “a humanitarian catastrophe” and blaming it for the deaths caused by COVID-19.

Notably, some of the comments were entirely copied from articles covering COVID-19, and others seemed to have been translated from other languages into English as they refer to Coronavirus as the literal translation, “crownvirus”.

Image 11: Creation date of the accounts featuring a similar bio. 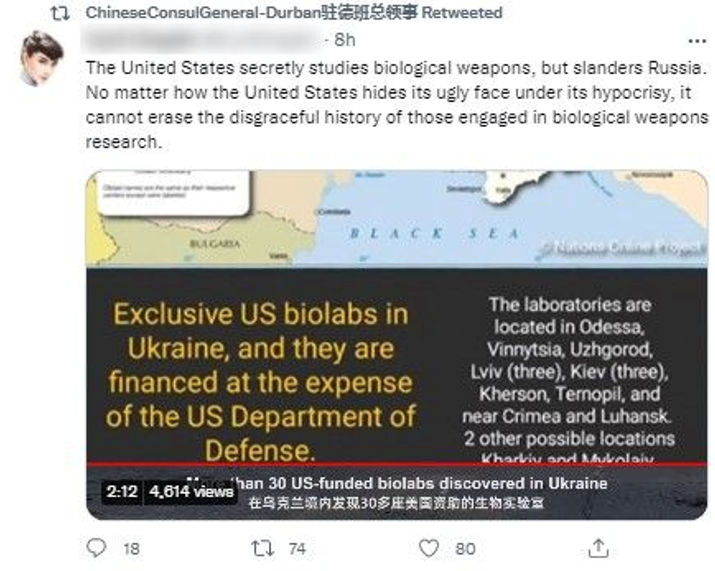 Image 12: A video posted on 18 March accuses the US of funding biolabs in Ukraine.

Image 13: The top two comments above were entirely copied from the paragraph in the article below.

This research illustrates that a set of accounts that are aligned with CCP talking points on Ukraine may have been coordinated with the intention of artificially inflating pro-Kremlin narratives on the conflict. Within the identified network of almost 200 pro-CCP accounts, only 13 accounts were found to be posting original tweets, while the rest of these accounts appeared to be inauthentic and amplified these tweets using retweets and comments.

Most of the content published so far has struggled to gain traction among ‘real’ users. However, the amplification of these tweets by Chinese state officials with hundreds of thousands of Twitter followers is concerning as it offers visibility and credibility to a swath of accounts that appear to be part of a propaganda and disinformation operation.

All of the data used for this research was collected via Twitter’s public API. Data was ingested and analysed using Brandwatch and Method52, a proprietary system for gathering, analysing and visualising online discussion at scale.