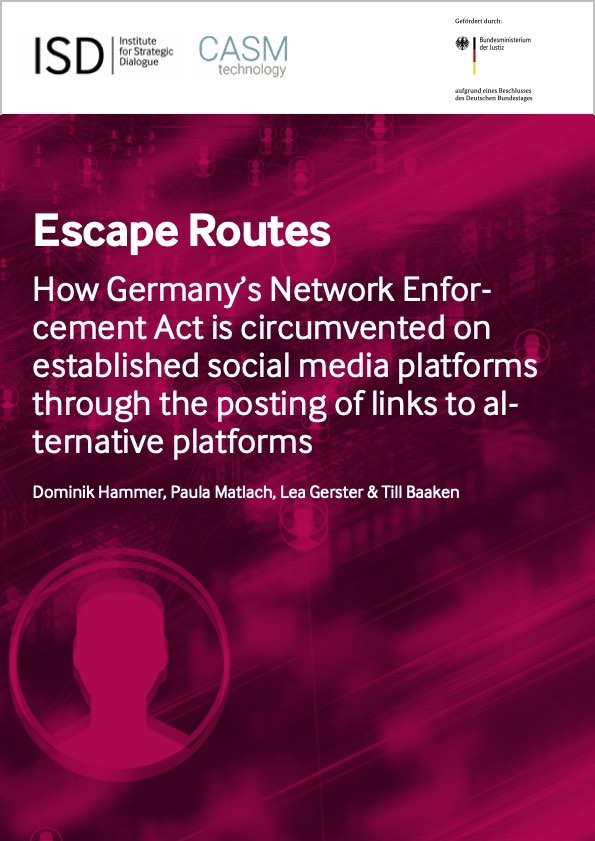 For this study, the online milieu of radical right-wing and extreme right-wing actors was investigated with regard to linking to alternative platforms. The aim of the analysis was to make the cosmos of online platforms used by right-wing extremist and radical right-wing actors accessible to readers and researchers.  As established social media such as Facebook, Instagram, Twitter and YouTube increasingly remove illegal and extremist content due to (self-)regulation and legal pressures, many extreme right-wing and radical right-wing actors find themselves forced to switch to alternative platforms. In order to show their subscribers on the established platforms where their content can be found, many of these actors link to alternative platforms. This dynamic is problematic because the discourses of anti-democratic activists takes place outside of public debates and transparent structures, allowing them to plan actions, expand their networks and spread incitement undisturbed and unchallenged. Through the link analysis of a sample of posts on Facebook, Instagram, Twitter and YouTube, this study comes to the following conclusions:

Some developments in the online activity of extreme right-wing and radical right-wing groups pose particular challenges for security authorities and researchers.

Dominik Hammer is a Research Manager at ISD, where his activities include analysing far-right radicalism and right-wing extremism online. His areas of interest include democratic theory, the strengthening of democratic practice and the analysis of anti-democratic movements. Before joining ISD, his experience included university research and teaching, as well as adult education. He is co-author of the ISD research reports Signposts, Telegram as a Buttress, Detours and Diversions, and Auf Odysee, as well as the conference report In the Blind Spot.

Paula Matlach is an Analyst at ISD, where she studies the spread of disinformation and propaganda in German-speaking and English-speaking countries. Prior to joining ISD, she spent 18 months working as a researcher at the NATO Strategic Communications Centre of Excellence, where she published articles on network regulation and foreign influence, among other topics. She is co-author of the ISD research reports Signposts, Deutschland und der angebliche Klimalockdown and Auf Odysee.

Lea Gerster is an Analyst at ISD. Her areas of interest include the proliferation of extremist ideologies, disinformation and conspiracy narratives in German-speaking and English-speaking countries. Prior to joining ISD, she spent two years working with think tanks and consultancy firms in London on projects aimed at countering online extremism. She is the co-author of the ISD research reports Telegram as a Buttress, Detours and Diversions, Crisis and Loss of Control, Disinformation Overdose: A Study of the Crisis of Trust among Vaccine Sceptics and Anti-Vaxxers and The Rise of Antisemitism Online During the Pandemic: A Study of French and German Content.

Till Baaken is a Senior Manager at ISD, where he investigates right-wing extremism, Islamism, disinformation campaigns and conspiracy narratives in German-speaking and English-speaking countries. His work on radicalisation and deradicalisation has been published in a range of journals, including the Journal for Deradicalisation and the International Journal of Conflict and Violence, as well as several books and handbooks. He is co-author of the ISD research reports  Signposts and  Disinformation Overdose: A study of the Crisis of Trust among Vaccine Sceptics and Anti-Vaxxers.