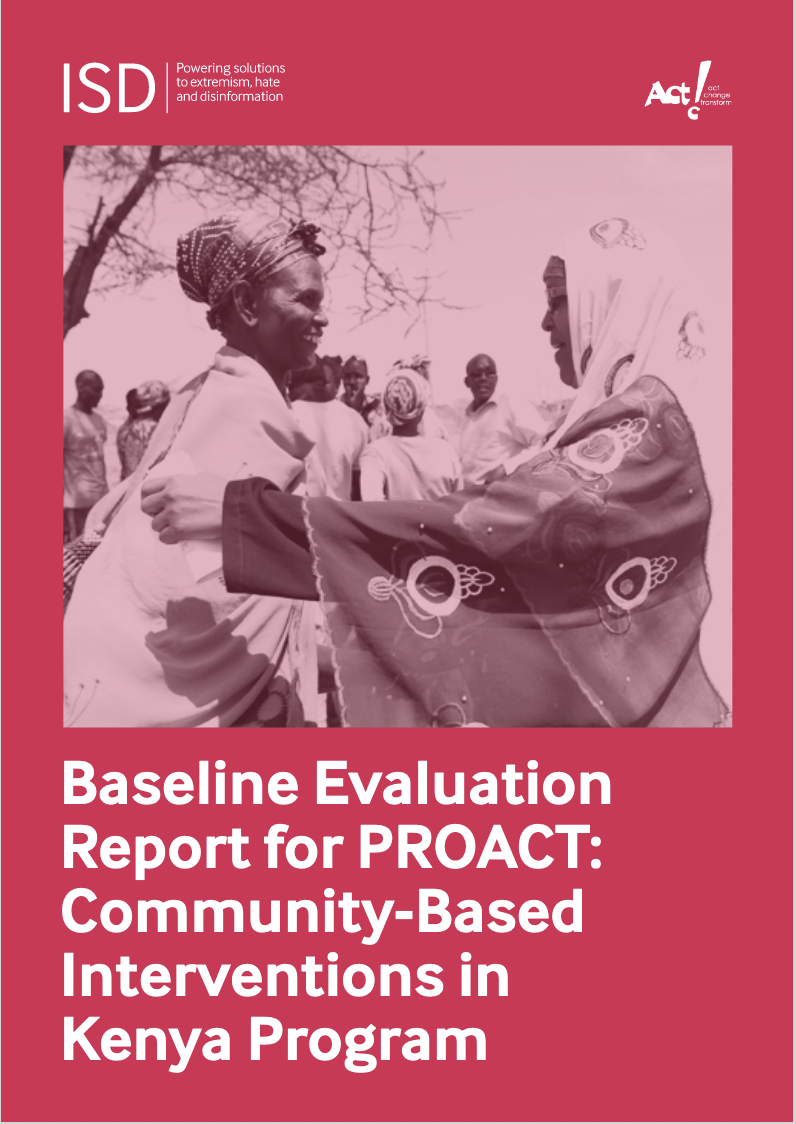 On 18 September 2019, ISD was awarded funds for the development of a community-based interventions program in Isiolo, Nakuru and Kwale Counties, Kenya. This program builds upon ISD’s expertise, through the Strong Cities Network (SCN), supporting local-level stakeholders in developing multi-sectoral Local Prevention Networks in Lebanon, Jordan and North Macedonia. PROACT – a community based interventions program, aims to build the capacity of ‘community teams’ to deliver interventions via a ‘community engagement framework’ and enable local preventing/countering violent extremism (P/CVE) actors to operationalize the County Action Plans (CAPs) on P/CVE.

Given the lack of a clear evidence base of radicalization and drivers of violent extremism (VE) in Kenya, PROACT collaborated with Act! to develop this baseline report to study community-based P/CVE interventions in the counties of Isiolo, Kwale, and Nakuru. This baseline study established an initial dataset that will serve as a baseline for tracking and evaluating how the program contributes to increasing communities’ resilience to address polarization, radicalization, and extremism. The results have been used to revise the theory of change and the logical framework designed for each county.

Amongst others, the study established that the infrastructure and systems for formal mental health and psychosocial support services (MHPSS) for counseling youth who have been affected by or are vulnerable to radicalization and VE are weak or even non-existent in places such as Isiolo. Nearly all MHPSS respondents expressed that they could benefit from technical assistance in capacity building on VE and methods of assisting and handling alleged Al-Shabaab returnees from Somalia and at-risk youth. Additionally, the institutions also reported other significant challenges like clients presenting with complex, multifaceted psychological and psychosocial conditions, family problems, and a lack of resources. MHPSS services also tend to be expensive and remain out of the reach of most people. The baseline study recommended that PROACT stakeholders need to carry out strategic advocacy to encourage both the national and county governments to invest more resources in MHPSS systems.

This report was produced by ISD and Act!, a leading Kenyan NGO. Act! was established in September 2001 as Pact Kenya and rebranded in 2011 as a fully-fledged local organization. Act! focuses on building the capacity and resilience of individuals and communities, thus empowering them to get involved in the decisions and management of their own development.