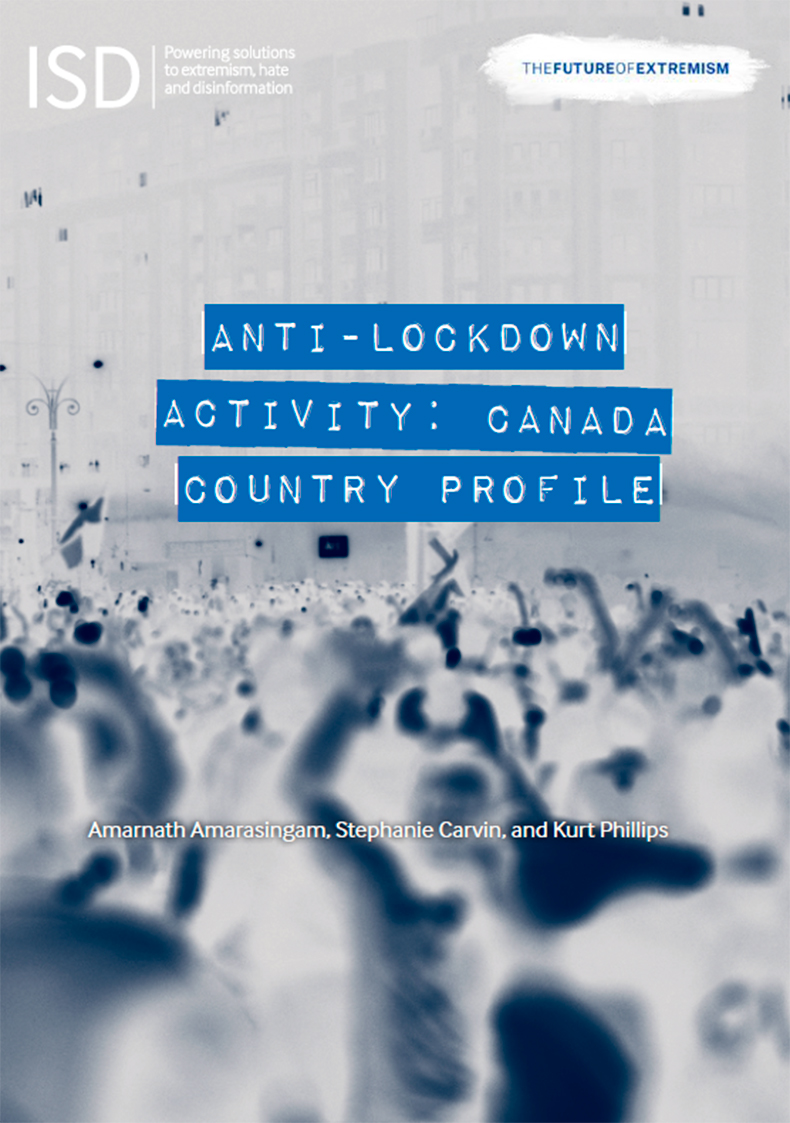 This report provides a summary of anti-lockdown activity in Canada, encompassing the key figures, groups and ideological overlaps of those involved.

Almost immediately following the introduction of public health measures brought in under provincial emergency legislation, an anti-lockdown movement emerged. While some of those involved are individuals frustrated with the closure of their businesses and perceived harm to their livelihood, the most vocal and prominent ‘activists’ are frequently supporters of the far-right.

Some of the organisations involved in this movement have a long-standing presence in Canada, such as Vaccine Choice Canada. Others are newcomers challenging public health restrictions, lockdowns and vaccinations, including No More Lockdowns Canada, Hugs Over Masks, Nurses Against Lockdown (now merged into Canadian Frontline Nurses), Liberty Coalition Canada, and The Line.

These protest groups are joined by a range of extremists from the far-right of the political spectrum, including the Canadian Yellow Vest movement and the Canadian chapter of the Islamophobic and anti-immigrant Soldiers of Odin. Their narratives are laundered and amplified by a well-established alternative media ecosystem, including outlets such as Rebel News, Western Standard, True North, and the Postmillennial.

Politics has also been touched by anti-lockdown and COVID-sceptic narratives, with figures such as People’s Party of Canada leader Maxime Bernier, MPP Randy Hillier, MPP Derek Sloan, and Christian Heritage Party leader Laura Lynn Tyler Thompson among those engaging in anti-lockdown activism, with some appearing alongside prominent conspiracy theorists as well as accruing a slew of arrests and charges.

The Religious Right, sovereign citizen/freeman-on-the-land movements, QAnon supporters, and the white nationalist Groypers of the Canada First movement can all also be found among those involved in opposing public health policies and promoting conspiracy theories and misinformation about the pandemic.

It is unclear where this movement is heading. Far-right groups in Canada are historically fractious and less popular than their American and European counterparts. However, anti-lockdown actors have had 18 months to network and build their influence and reach, and many have become entangled in the far-right in a variety of ways. Some COVID-sceptics may well return to their regular lives, but others may stay in touch with extremists and be drawn into whatever issue becomes the next touchstone for the far-right. The rise of the youth-driven Groyper movement and the propagation of a post-Trump presidency QAnon movement, combined with those who seek to tie conspiracy theories to anti-government extremism may pose serious public order, if not national security challenges.