On Saturday 14 May, an 18-year-old white man embarked on a mass shooting at Tops Supermarket in Buffalo, New York, appearing to target African Americans and Latinos. Ten people have been confirmed dead at this time. The shooter left a 180-page manifesto espousing white supremacist and accelerationist ideologies, conspiracies such as the Great Replacement theory, and a range of other extremist narratives.

The manifesto’s front page contains a meme including a Black Sun, also known as a Sonnenrad. This is an extremely common symbol designed by and for the Nazis under Heinrich Himmler. This symbol also appears on clothing worn by the shooter in images circulating online.

Since the immediate aftermath of the shooting, pro-Kremlin influencers and others have attempted to link the shooter and his actions to the Azov Battalion, a regiment of the Ukrainian army associated with neo-Nazi and white supremacist ideology. This Dispatch examines the key actors spreading these narratives and the mechanisms by which they are doing so.

Many of the narratives attempting to link the shooter to the Azov Battalion hinge upon a loose thread between Brenton Tarrant, the Christchurch terrorist, and the references made to him in the Buffalo shooter’s manifesto. Accounts and channels ISD analysed claimed that Tarrant had either been trained by, or had ties to, the Azov Battalion. However, the New Zealand Government’s commission into the Christchurch attack found no evidence of ties to the group.

It is also important to note that the Azov Battalion are a small minority subsumed into the Ukrainian military forces. However, they receive media attention because of their associations with neo-Nazism. These associations are used as a narrative to besmirch the Ukrainian resistance to Russia, with pro-Kremlin propaganda claiming that Russia’s invasion was partly intended to ‘denazify’ the country.

How and why are pro-Kremlin influencers attempting to link the Buffalo shooter to Azov Battalion?

The primary narratives ISD has encountered in its analysis of this phenomenon are as follows:

Who is claiming that the Buffalo shooter is associated with Azov Battalion?

The influencers and channels ISD has observed producing and amplifying these narratives are primarily supportive of the pro-Kremlin narrative justifying the invasion of Ukraine under the auspices of “denazifying” the country. The narratives appear to have emerged initially on Telegram before finding a home amongst pro-Kremlin influencers on Twitter.

Juan Sinmiedo is a pro-Kremlin influencer with nearly 48,000 followers on Twitter, whose Telegram channel has nearly 35,000 subscribers. He claims his primary mission is to expose “Ukrainian human rights abuses”.

Sinmiedo has previously expressed doubt in the Bucha massacre, suggesting it was staged, and claims Ukraine is engaged in a range of war crimes. Within an hour of the attack in Buffalo, Sinmiedo was spreading the narrative that Nazi sympathisers and those supporting Ukraine were “ideological brothers” of Buffalo shooter Payton Gendron.

The Donbass Insider Telegram channel has over 25,000 subscribers and is linked to a Twitter account with over 9,000 followers, and a standalone website that has received more than 1.1 million visitors over the past 3 months. The channel functions in French and English. After the attack, the channel shared numerous links to the video of the shooting, insinuating that the shooter was “ideologically linked” to Azov Battalion. Donbass Insider shared messages indicating that Azov had translated the Christchurch terrorist’s manifesto into Ukrainian and posed with it while giving Nazi salutes. These linkages, the channel insinuated, exposed the hypocrisy of the United States in condemning neo-Nazi violence at home and ‘supporting’ it in the conflict with Russia. The Donbass Insider was often feeding Juan Sinmiedo content into its feed on the linkages between the Buffalo shooter and the Azov Battalion. 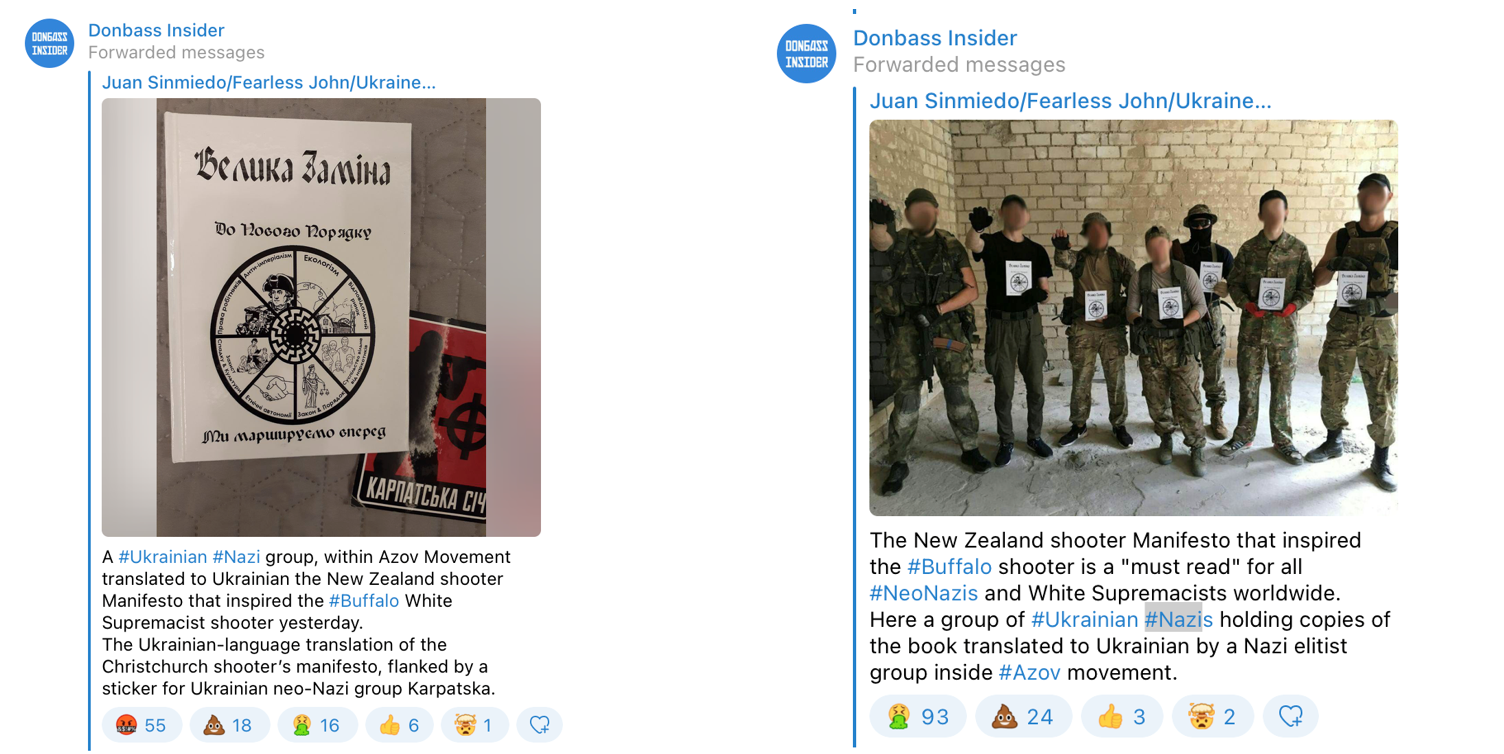 Figure 2: Images posted by the Donbass Insider attempting to link the Buffalo shooting to Azov Battalion.

Ukraine Maps is another Telegram channel spreading pro-Kremlin narratives. It produced a comparison image demonstrating the Buffalo shooter wore a Sonnenrad in an image and placing this side-by-side with an Azov Battalion soldier wearing the same symbol.

Figure 3: Ukraine Maps attempts to link the Buffalo shooter to Azov through the Sonnenrad symbol.

Ukraine Maps has nearly 38,000 subscribers and has had its Twitter account banned 4 times (including immediately after the Buffalo shooting), according to its administrator. The image linking the Sonnenrad, Gendron and Azov has been viewed more than 41,000 times.

Figure 4: A verified Twitter user notes that Ukraine Maps has been suspended, insinuating this is due to ‘revealing’ that Payton Gendron is linked to Azov.

Intel Slava Z is a well-known pro-Kremlin disinformation aggregator, claiming to cover “conflicts/geopolitics and urgent news from around the world.” It has nearly 400,000 subscribers on Telegram. Its content is shared on Twitter and Facebook by pro-Kremlin supporters, despite not having its own footprint on these platforms.

Intel Slava Z posted on Telegram in the aftermath of the shooting attempting to link Payton Gendron to Azov Battalion through the Sonnenrad symbol. The post has been viewed nearly 200,000 times and its content has been shared on Twitter by influencers including Benjamin Norton. The content contained in the post has been repeated by Ian Miles Cheong, Michael Tracey, and others. 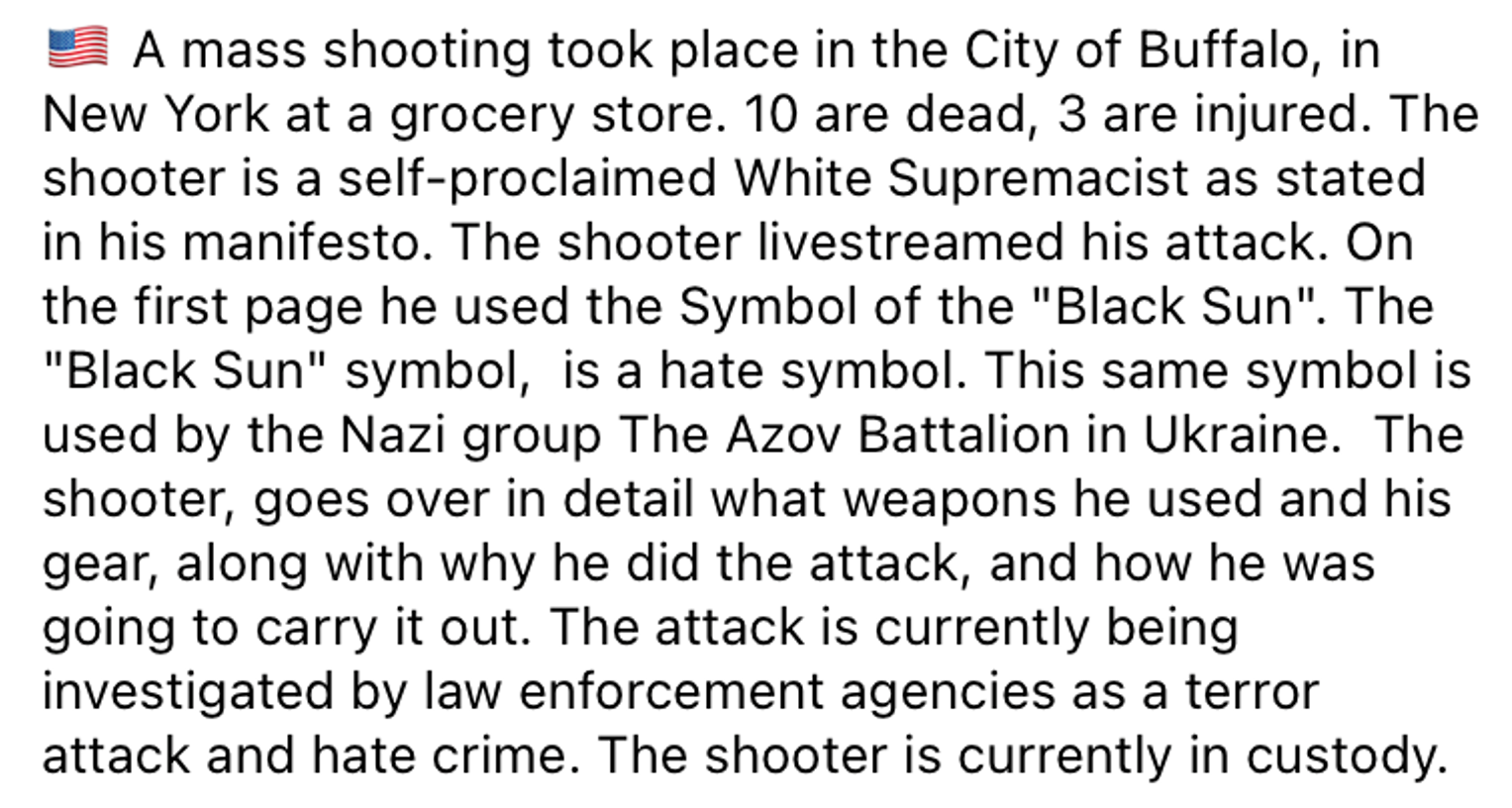 The New Atlas is a platform for Brian Berletic, also known as Tony Cartalucci, that “provides geopolitical analysis”. Its YouTube channel has 108,000 subscribers and has had over 7.6 million views on its content since 2011. The New Atlas has previously questioned the Bucha atrocities in a video dubbed “Why Ukraine’s “Massacre” Story Isn’t Adding Up”. The video has over 91,000 views.

In a 6-minute monologue to camera, Brian Berletic linked the Buffalo shooter to the Azov Battalion through the Black Sun emblazoned on his chest and suggested that the United States is not just responsible for his radicalisation but is actively stoking neo-Nazi radicalisation in Ukraine. Berletic linked it to the US and its relationship with “jihadists” in Syria in the description of the video. The video had more than 54,000 views as of May 16.  He claimed, “this toxic ideology that infected this killer who killed these people in Buffalo New York, they are encouraging it, enabling it, and exploiting it elsewhere in Ukraine.”

Garabato.info is a Spanish ‘media outlet’ that claims to provide accurate news and fight disinformation. It has over 126,000 followers on its Facebook page, along with a small presence on Twitter, Instagram and YouTube. It has a website with fewer than 5,000 visitors in the last month, all from Mexico. The outlet shared a post on Facebook suggesting that the Buffalo shooter was linked through social networks to Azov Battalion. 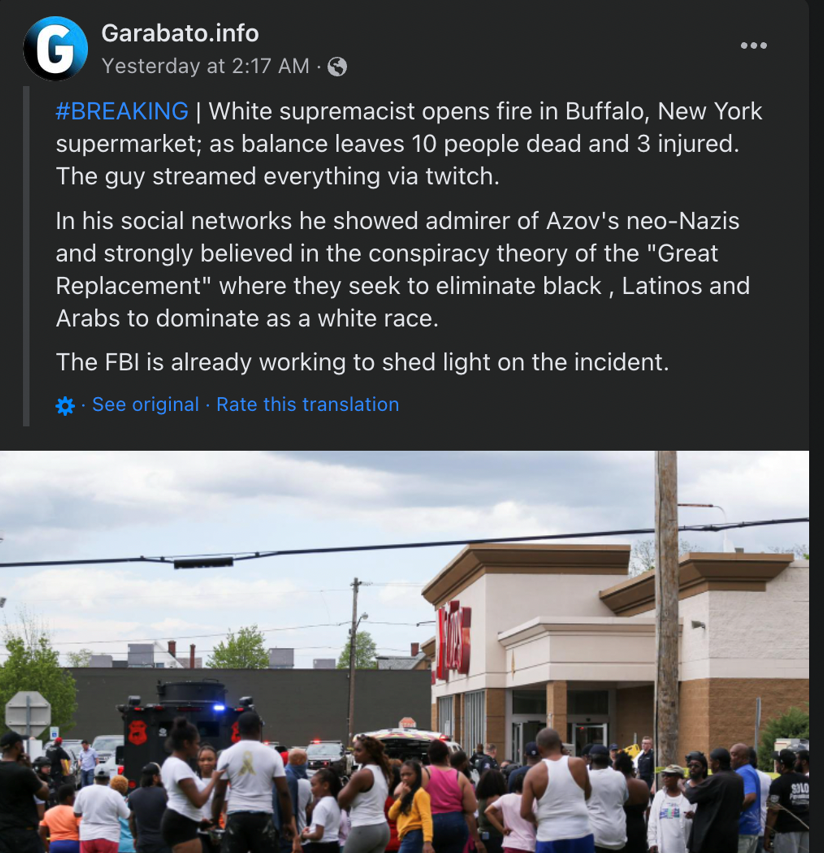 Defiant American is a disinformation website that claims it “stands against those who oppose everything that made America great!” and defies “The totalitarian left’s attempt to control our lives.” Its website has had more than 415,000 visitors in the last 3 months, 86% of which come from the United States. It averages 86,000 unique visitors a month. It is peddling the narrative that the Buffalo shooter is linked to Azov due to both appearing with the Black Sun.

Defiant American frequently attacks Democrats as well as antifa, Black Lives Matter, Muslims and pro-choice activists in its articles, which are an amalgamation of emotive videos and photos, and clickbait. 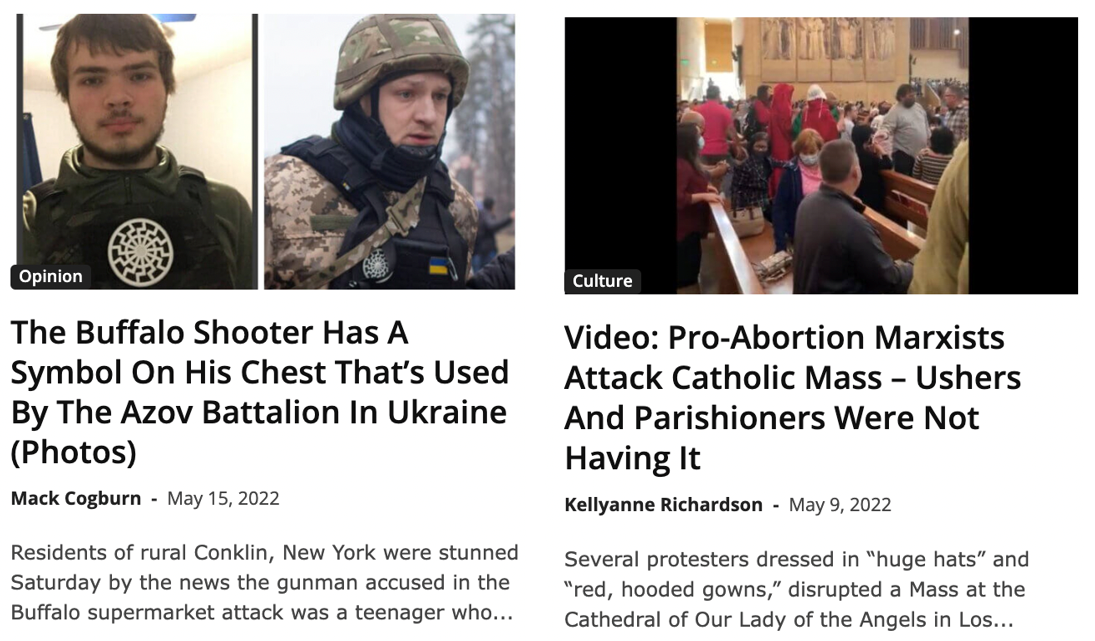 As the narrative linking Payton Gendron to Azov Battalion made its way from Telegram to Twitter before being amplified by a range of pro-Kremlin and other influencers, it was picked up by Russia Today (RT). In a segment run the day after the shooting, RT repeated the loose connections between the shooter and Azov Battalion to support pro-Kremlin claims of ‘denazification’ and a threat to the world.

The segment of 2:20 minutes included references to the Black Sun connection. It read out Twitter posts espousing this narrative and linked to Benjamin Norton and others. It then compared this incident with a NATO Twitter post on International Women’s Day that carried a photograph of a female Ukrainian soldier wearing a vest with the Black Sun.

It is in the interests of both pro-Kremlin, far-right, and some hard left influencers and groups to attempt to link Payton Gendron, the Buffalo shooter, to Azov Battalion. For pro-Kremlin actors, doing so allows them to delegitimise the United States’ support for Ukraine, forcing them into a position of being seen to be defending white supremacists in Azov Battalion. It also attempts to weaken the US’ claim to moral authority by showing that it has issues with neo-Nazism domestically.

For the far-right, attempts to link Gendron to Azov have more complex motivations. Some actors in this space are pro-Kremlin as well and want to undermine the US’ support for Ukraine. Others are attempting to link the Buffalo shooter, whose manifesto trafficks in right-wing extremist tropes, to a foreign group. In so doing they may hope to avoid uncomfortable questions about the shooter’s domestic radicalisation journey.

Some on the hard left are also pro-Kremlin, sometimes driven by the belief that NATO expansion is unwarranted, and that Putin is fighting against American imperialism and hegemony. For those in this camp, linking Gendron to Azov, and Azov to the US, is a mechanism for undermining the morality of the US government in their support for Ukrainian resistance to the Russian invasion.

The opportunistic linkage of Payton Gendron to Azov Battalion serves different purposes for different actors. The speed with which this propaganda was produced and disseminated, as well as the multitude of different and often opposing groups amplifying it, shines a light on the unlikely alliances of convenience forged during the war in Ukraine and America’s struggle with domestic extremism.