For the past six months, ISD analysts have monitored online discussion about climate change across the Visegrad 4 (Czech Republic, Hungary, Poland, Slovakia).

In Poland, online discussion of climate change falls under the debate around decarbonisation. This being said, climate change is largely absent from the decarbonisation debate, which is instead dominated by economic and security arguments in favour of, and in opposition to, the Polish coal industry.

This dispatch highlights the key trends in discussion, as well as the types of messaging different actors employ. The findings outlined in this dispatch underpin the case study of the Turów mine.

This research is based on a dataset of 52,560 Polish-language posts from Facebook, Twitter and Instagram collected between 1 January 2021 and 15 March 2021. Analysts developed a set of keywords related to coal mining, the energy sector and climate change in order to identify and analyse key narratives. Based on successive manual reviews of the dataset, a list of 160 exclusionary terms were established to filter out irrelevant content.

➜ The issue of climate change is largely absent in the Polish coal debate. Rather, it is dominated on both the pro- and anti-coal sides by economic and security arguments. The most shared posts on Facebook, Twitter and Instagram supporting coal mine closures highlight subsidies received by state owned companies from the national budget and benefits received by miners as part of their remuneration packages, presenting both as excessively generous.

By contrast, pro-coal messaging focuses on examples from abroad, including the ongoing use and even new investment in fossil fuels by major economies like Japan. The arguments rely either on citing double standards or problems with the reliability of renewable energy sources. 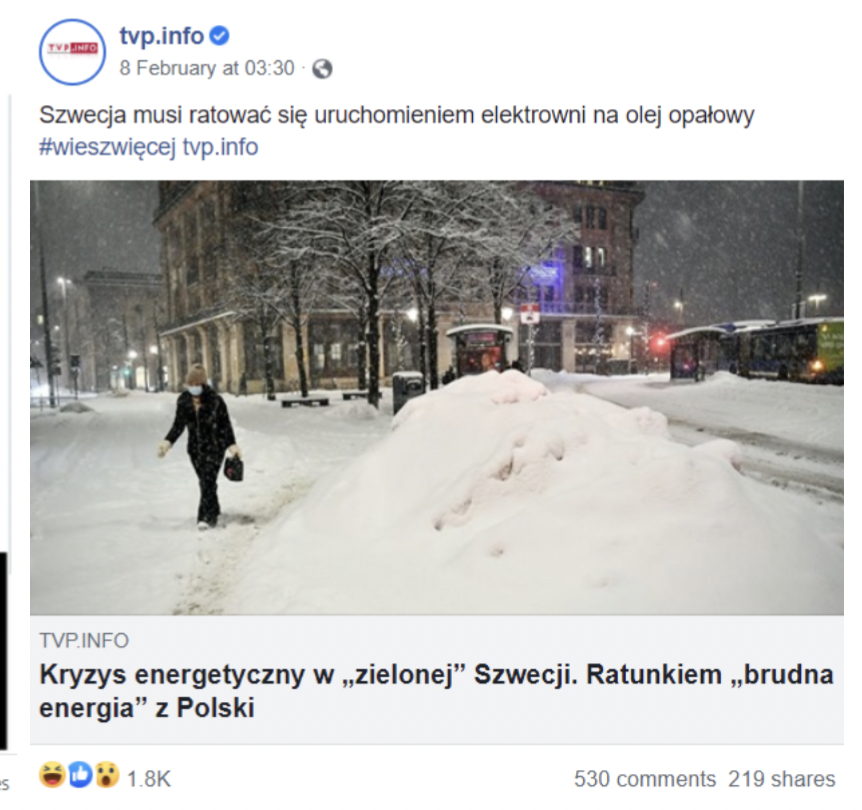 Caption translation: “Sweden has to save itself by turning on oil fired power plants.”
Article title translation: “Energy Crisis in ‘green’ Sweden. [The] Rescue was ‘dirty energy’ from Poland.”

➜ Following the news on 8 March 2021 that demolition work was starting at the Ostrołęka C power plant building site, analysts witnessed a significant spike in social media activity. The most widely shared posts overwhelmingly originated from politicians and supporters of the Civic Platform (PO) party, attacking the government for the failure of a coal project promised to coal miner unions in previous election campaigns. The debate was led almost exclusively in economic terms, with concerns for the climate largely absent.

➜ Support for the coal industry and pushback on climate concerns came from the fringes of the government coalition and the far-right Konfederacja party. They zeroed in on rising energy prices, which they blamed on the introduction of emissions trading by the EU.

Translation: “[The] Germans have 6 nuclear power plants and keep their coal mines. But Poland has to liquidate its coal [mines], run on wind turbines that don’t work in winter. When winter comes [we will] have to beg the Germans or Russians for electricity. F*** off.”

➜ The most frequently shared links in the dataset were to articles published by mainstream media outlets, followed by links to articles from fringe right-wing Polish outlets (e.g. Magna Polonia, W Locie, Fronda) and the main news channel of the highly politicised public broadcaster TVP. However, when analysing the content of the posts sharing these links, analysts observed that the sharing of mainstream stories did not predominantly imply endorsement of their narratives. For example, a link to an article from the New York Times criticising new coal plants in Japan was the basis of a popular post. Further examination of the post revealed that the NYT’s critical stance on coal was conveyed as a pro-coal message.

➜ Analysts did not find significant fringe outlets dedicated to climate issues, or even adopting climate as one of their main topics. Rather, fringe outlets defend the coal sector as an occasional element of their wider anti-progressive messaging. Currently, anti-vaccine and anti-lockdown content is dominating their outputs.

The messaging employed by different actors

When judged by post share count alone, posts from various fringe outlets and individual journalists play an important role in the Polish coal debate as their posts garnered some of the highest share counts in the dataset. This being said, coal issues and climate change denial do not appear a major concern to these actors.

The most prominent amongst them employ anti-progressive messaging on a broad front, seizing on current events to push a wider viewpoint. While some climate-sceptic narratives can be found within their messaging, the primary focus lies in warning people about ‘foreign interests’ allegedly trying to destroy the Polish coal sector. Currently, the main focus of these actors are COVID-19 related narratives (e.g. anti-vaccination, anti-lockdown).

➜“Magna Polonia”: Despite receiving only minimal engagement with their social media posts, this Catholic national news account’s articles on coal and the climate regularly featured among the most widely shared links in our dataset (37.6k Twitter followers).

This category primarily comprises the governing party Law and Justice (PiS), as well as the state institutions they control. Due to the significant politicisation of state-owned/-controlled companies in Poland, the major energy giants (e.g. ORLEN, TAURON, PGG, PGNiG) and the public broadcaster TVP fall into this group. By share count, individual politicians affiliated with this group are comparatively less prominent.

The messaging from actors in this category is highly contradictory: Leading members of the government promote issues like climate neutrality and decarbonisation; in parallel, individual politicians within the governing coalition share strongly pro-coal content, albeit through the lens of energy sovereignty rather than climate scepticism.

Among the most active commentators are the far-right parties united in the Konfederacja alliance: Ruch Narodowy, Konfederacja Korony Polskiej, and KORWiN. This includes the accounts of their local branches, party activists, elected officials and national leaders. Their messaging relies strongly on anti-German sentiments, international double standards and strong support for the coal sector as a provider of energy sovereignty and Polish jobs. Actors in this category are increasingly focusing on the topic of increasing energy prices, blaming EU emission trading and German interests.

➜“Robert Winnicki”: One of the leaders of Konfederacja (92k Facebook followers).

There are two accounts in this group that were responsible for numerous widely shared posts – as such, they assume an active role in the Polish debate on social media. Notably, these accounts are the most visible for climate-based arguments against coal and debunking climate sceptic talking points. Their main thrust lies in promoting nuclear energy to achieve climate neutrality. Highlighting challenges for the nuclear phase-out in Germany, and a resulting dependence on natural gas from Russia, is also a key part of their messaging.

This group predominantly comprises actors affiliated with the main centrist opposition party in Poland, Civic Platform (PO), including PO politicians, activists and some of the (more or less openly) affiliated social media outlets with strong anti-PiS messaging. The most prominent example of the latter is “Sok Z Buraka”, an account closely related to this party. Climate-related messaging does not feature significantly in their posts on the coal mining issue. Instead, the most common narrative in our dataset is an economic argument against maintaining the subsidised coal mining sector.

This group also relies on highlighting examples of broken government promises to the coal sector and coal mining unions. A few prominent independent politicians critical of the government also fall into this category. Actors in this category dominated the social media discussion about the Ostrołęka C power plant demolition in mid-March 2021.

In the online Polish debate about decarbonisation and the energy sector, the research ultimately highlights the use of climate change as a tool to support arguments both in favour of, and against coal mining rather than a topic in its own right. With the majority of discussion focusing on energy security and sovereignty, arguments in favour of delaying climate action  frame it accordingly, pointing towards the alleged double standards of major European and global economic powers as a reason to stall measures aimed at protecting the climate.

Lukasz Janulewicz is an Analyst in ISD’s Digital Research Unit.