Complex chapters of Baltic history are being intentionally misrepresented to elevate Russian actions and discredit the Baltic States as ‘neo-Nazi’ and ‘fascist’. The misconstrual of historical events encourages a reductive Cold War-era posture that justifies spheres of influence in the territories of sovereign states.

In post-Soviet Russia, Victory Day on 9 May has increasingly served as an occasion to celebrate Russian military power, glorify the Soviet past and assert neo-imperialist ambitions by drawing parallels between the Soviet Union and the current Russian state. While Latvia remembers the defeat of Nazism and end of WWII on 8 May, each year more than 100,000 Russian-speaking Latvians gather in Uzvarus Park (‘Victory Park’) in Riga on 9 May to commemorate Victory Day.

This year, Latvia declared the 9 May an official day of commemoration for the victims of the war in Ukraine. Any celebrations in connection with Soviet Victory Day, including the use of USSR symbols, were prohibited over fears the event could be used for Russian propaganda and as a rallying point for Putin supporters.

While the custom of bringing flowers to the monument in Uzvarus Park was not prohibited, visitors were asked to set the flowers on a table where officials would then place them at the monument. The day saw members of Latvia’s Russian-speaking population peacefully gather at Uzvarus Park. However, the next day when flowers were removed by a tractor (an unprecedented move by the Latvian authorities, based on the premise that they had wilted and frozen) pro-Russian protesters began to rally at the monument.

The Latvian Russian Union (LKS), a Russophile Latvian party representing Russian minority interests, alleged on its website that Latvia “cynically mis[used] the tragedy unfolding now in Ukraine.” It called for people “to take part in the rally against the immoral conduct of the authorities of Latvia.” Influential Twitter accounts, many of which appear to be managed by international actors, were quick to respond to the on-the-ground events.

Images 1, 2 and 3: Tweets linking the Latvian government’s declaration of 9 May as an official day of commemoration for victims of the war in Ukraine to Nazism.

At the protest in Uzvarus Park in Lativa, some protesters sang Soviet songs or held Russian flags, and some wore the banned Ribbon of St George, which led to their arrest. In November 2021, Latvia and Estonia banned the black-and-orange St George’s ribbon, along with displaying Z and V symbols at public events or within 200 meters of Soviet soldiers’ monuments. The ribbons, a longstanding hallmark of WWII victory celebrations across post-Soviet countries, have more recently become a symbol of Russian expansionism, especially since Russia’s invasion of Ukraine in 2014.

Influential accounts have responded to Baltic countries’ removal or restriction Soviet symbols. Tim Anderson (80K followers) and Dagny Taggart (12.9K Followers) alleged that these measures amounted to “Sesame Street fascism” (Image 4), and that the Baltics were “clearly glorifying Nazis” (Image 5). In reaction to Estonia’s announcement to remove Soviet monuments from public spaces, Ali Abuninah (142.1K followers) claimed the “full re-nazification of the Baltics” (Image 6). In particular, the removal of Soviet-era monuments has long been subject to Kremlin narratives.

Images 4, 5 and 6: Sample tweets framing prohibitions of Russian symbols and removal of Soviet-era monuments across the Baltics as fascism and Nazism.

On 12 May 2022, the Saeima of Latvia (Latvia’s parliament) approved the demolition of the Soviet-era ‘Monument to the Liberators of Soviet Latvia and Riga from the German Fascist Invaders’. The monument had long been a controversial symbol in Latvia given deeply divided memories of Soviet occupations; it was dismantled on 25 August.

The Bill passed by the parliament amended a 1994 agreement between Latvia and Russia regarding the preservation of Soviet-era monuments. Richard Kols, chairman of the Seimas Foreign Affairs Committee said, “Today, the image and symbolism of the Soviet Army are directly and unequivocally linked to the Russian aggression and the crimes committed by its armed forces in Ukraine”.

On 13 May, protesters rallied against the government decision at Rātslaukums (Riga’s Townhall square). Among those arrested was Tatjana Ždanoka, leader of the LKS and member of the European Parliament. On Twitter, the account of the Russian Ministry for Foreign Affairs immediately responded to these events, calling them “neo-Nazism, European style” (Image 7). The account AZmilitary1 (40.7K followers), which claims to provide “the latest geopolitics, geoeconomics and military news”, posted several tweets alleging the events were “EU fascist beast in action” (Image 8). In August, the official Twitter account of Russia’s Ministry of Foreign Affairs (556.2K followers) alleged a “neo-Nazi bacchanalia” was gaining momentum in the Baltic countries “with regard to Soviet memorial heritage” (Image 9).

Images 7, 8 and 9: Sample tweets claiming the Latvian government was ‘Nazi’ for demolishing the Soviet-era monument.

Baltic countries’ national memory is complex, and it is made more complicated by Kremlin narratives that seek to distort historical events of the 20th century in order to deny Soviet repression and link the Baltics to Nazism.  In the wake of  WWI, the Baltics waged wars of independence against Soviet Russia, leading to the establishment of peace treaties in 1920. In 1939, Baltic independence was lost when the Soviet Union and Nazi Germany agreed on the Molotov-Ribbentrop Pact, which recognised the Baltics as falling within a “Soviet sphere”. Under Soviet rule, thousands of Estonian, Latvian and Lithuanian people, primarily officials and intellectuals, were deported to Siberia. In 1941, with the beginning of the German invasion of the Soviet Union, the Baltics came under Nazi rule. Between 1944/45-1991, Latvia was re-occupied by the Soviet Union. While some were initially relieved, for most Latvia’s apparent “liberation” from Nazi Germany by the Soviet Union meant the return of the terror of 1940/41 as Communists used the Nazi occupation as a tool for suppression. Between 1946 and 1953, it has been estimated that deportations and deaths of those in support of independence reached 95,000 in Estonia, 125,000 in Latvia, and 310,000 in Lithuania.

Pro-Kremlin narratives frame anti-Soviet resistance (or commemoration of it) as “glorifying Nazis”. For example, in 2007, when people in Latvia participated in an unofficial remembrance event for Latvian and Estonian Waffen-SS divisions who had fought Soviet occupation, Putin accused Estonia and Latvia of “openly conniving at the glorification of Nazis and their accomplices”.

In July 2017, NATO published a “short docudrama” on YouTube about the partisan alliance of Latvian, Lithuanian, and Estonian soldiers called the Forest Brothers who fought occupying Soviet forces. According to its description, the video “includes interviews with former partisan fighters and those who supported them and dramatic battle scene recreations”. The release of the video triggered outrage among Russian officials, including from the official Twitter account of Russia’s Mission to NATO, which framed the Forest Brothers as “inglorious former SS fighters” (Image 10). 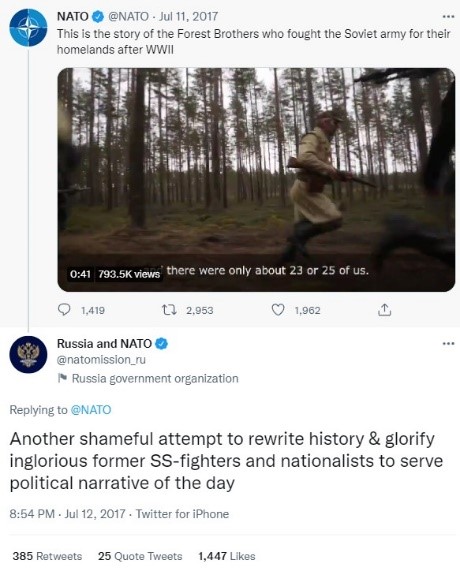 In the context of Russia’s invasion of Ukraine, official Russian accounts such as Russia’s Mission to the UN in Geneva (Image 11), as well as the accounts of Ben Norton (216.7K followers) and Gritty is the Way (41.5K followers), renewed Nazism accusations. These include calling the Forest Brothers “Baltic fascists who voluntarily collaborated with Nazi Germany” (Image 12). 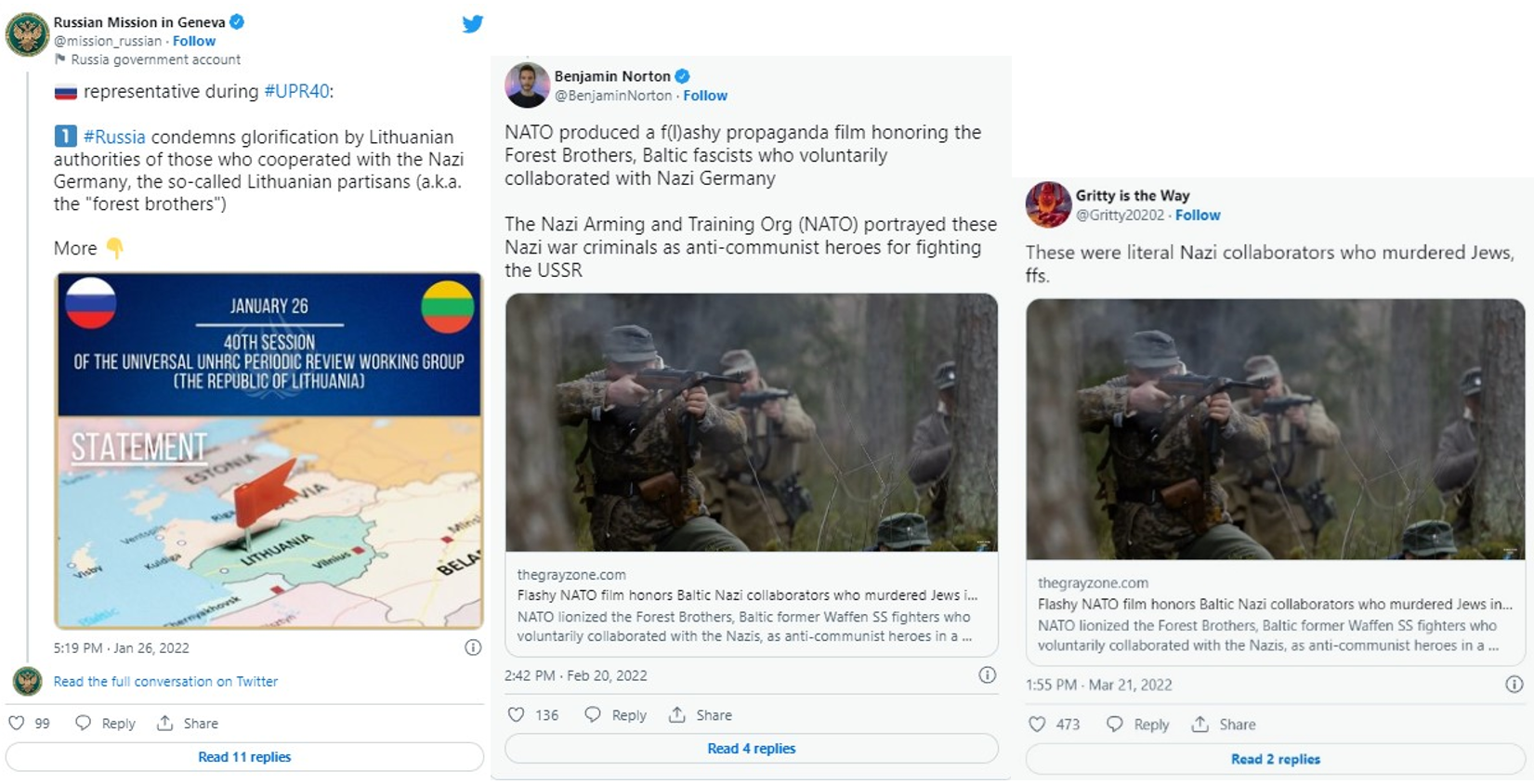 The history behind these accusations is considerably more complicated. While Nazi Germany founded Waffen-SS legions in Estonia and Latvia, the vast majority of soldiers were conscripted against their will. Draft evasion was initially punishable by prison, and later punishable by death. In 1944-45, as the Baltics were re-occupied by Soviet forces, Estonian and Latvian SS units were mobilised to fight Soviet occupation and to regain Baltic independence. Eventually the Displaced Persons Commission of the US government found in 1950 that the SS of the Baltic states “are to be considered as separate and distinct in purpose, ideology, activities, and qualifications for membership from the German SS”.

Claiming that members of the Estonian and Latvian SS units were voluntarily collaborating with Nazis oversimplifies history —these units remain a highly sensitive issue in the Baltics and internationally. While the Latvian government seeks to guarantee freedom of expression and freedom of assembly, 16 March is not an official day of commemoration, however it is observed by many in Latvia as a day to commemorate soldiers who died in WWII.  Government representatives do not take part in the day’s events.

Equally, Nazi accusations targeting the Forest Brothers are misleading. The partisan fighters had already fought the retreating Red Army in the summer of 1941 and were disbanded by Nazi Germany. The Forest Brothers ultimately fought a second resistance movement against the Soviet Union from 1945 until 1953.

Pro-Kremlin narratives distort and simplify a sensitive and thorny period of Baltic history, during which the Baltics were occupied multiple times by two totalitarian regimes, the Soviet Union and Nazi Germany. These narratives discredit any opposition to Soviet occupation as “fascist” and continue to justify the Soviet notion of exclusive “spheres of influence”. In the context of Russia’s invasion of Ukraine, these narratives exploit legitimate and complex concerns of ethnic Russians and Russian-speaking populations living in the Baltics, and sustain Russia’s longstanding Nazism allegations and its justification for military aggression in Ukraine.