In Part I, we looked at how the Proud Boys online presence reacted to the sudden and widespread exposure that the group received following Trump’s mention of them in the first US Presidential debate. Now, we look at the narratives and methods used in their responses.

The Southern Poverty Law Center classifies the Proud Boys as a hate group whose leaders and members have promoted white nationalist, anti-Muslim and misogynistic rhetoric. The Anti-Defamation League describes the group’s ideology as ‘alt lite’, consisting primarily of misogyny, Islamophobia, transphobia and anti-immigrant sentiment. The ADL explains that whilst the group is violent and nationalistic, their members present a range of ethnic backgrounds and its leaders “vehemently protest any allegations of racism”.  Neither organisation lists the group as white supremacists.

When combating hate groups, it is important to understand the differences in the terminology used to prescribe hateful ideologies, and the challenge of accurately classifying groups. Following President Trump’s mention of the group in the first Presidential debate, instead of the Proud Boys having to respond to charges highlighting their violence, misogyny and anti-Muslim rhetoric, the group was instead forced to respond to a less-nuanced accusation of being a white supremacist organisation. As the ADL notes, group members and supporters are no strangers to this conversation, and they responded by publicising the ethnic diversity of their members and promoting leader Enrique Tarrio as the public face of the organisation.

Following the Presidential debate, individuals and pages supportive of the group began to circulate a meme of Proud Boys leader Enrique Tarrio on Parler, a platform alternative to Twitter that has attracted many from the right and far right. The meme was designed to counter the accusation that the group are white supremacists, and initially showed a photo of Tarrio with a variation of the wording “This is Enrique Tarrio, leader of the Proud Boys. Joe Biden called them racists and white supremacists. The left is in a bubble”. This quickly became a central narrative for the group and its supporters and it was the principal defence against the description of them as white supremacists during the debate (See below).

Facebook and Twitter’s removal of Proud Boys accounts meant that the group’s voice was not directly present on their platforms. However, the borderless composition of the social media ecosystem allows for memes and content created on its fringes to spread across mainstream social media via unrestricted public pages and groups, often only loosely affiliated with or supportive of banned groups. The Proud Boys had a supportive audience ready to spread content on their behalf or in their support on these platforms.

Using CrowdTangle, ISD researchers identified 142 public Facebook posts from 116 different public pages that included a version of the meme. These posts received over 60,000 interactions in total. The pages sharing the meme included a range of right-wing, anti-Left, anti-Liberal, pro-Trump, guns rights activists, preppers (those who believe a disaster – usually sparked by social factors – is looming and “prepare” accordingly) and US nationalist pages and groups with close to 7 million followers in total with a range from between 151 to 930,000.

ISD identified 2,149 posts on Twitter, Reddit and a range of blogs that explicitly mentioned both Tarrio and his ethnicity to rebut the accusation that the Proud Boys were a racist or white supremacist organisation. Eventually, the Proud Boys began to ridicule their own meme on Parler by using photos of non-Proud Boy individuals (e.g. a photo of Michelle Obama), but keeping the same text. This likely helped to prolong engagement with the central message and increase interactions with posts on mainstream and non-mainstream platforms. It also ensured that any policy enforcement against the memes designed to diminish the group’s communications activities became increasingly difficult for the major platforms.

On YouTube, ISD identified several channels posting videos that promoted the group’s Enrique Tarrio narrative pushback against accusations that they were a racist organisation. Among the most prominent of these were Michael Knowles (302k subscribers) a right-wing and anti-Liberal channel, Tea Partiest (5k subscribers), and the Villain Report (10k subscribers), which has, since June 2020, been posting videos of the George Floyd protests, Donald Trump rallies and more recently Proud Boys marches. The channel’s videos have appeared across Twitter and have been shared by Proud Boys on Parler and Telegram. The most popular video from the Villain Report, titled ‘Are Proud Boys racist?’, has over 85,000 views and includes interviews with black members of the group.

Examples of the kinds of memes and tweets posted to support the Proud Boys defence against accusations of being racist or white supremacists (two memes posted on Proud Boys Telegram and Parler accounts).

The increased exposure that the group’s social media accounts and messaging channels received following the Presidential debate was complemented by news and media coverage of Proud Boys’ founder Gavin McInnes and of Tarrio. Both had already seen their personal and affiliated group accounts suspended on Facebook and Twitter for breaching the platforms’ community guidelines. However, alternative news pages such as Newsmax, which has 1.5 million Facebook followers, 200,000 Twitter followers and 291,000 YouTube subscribers, were able to post sympathetic coverage on the group’s behalf.

On 2 October, a video interview with Gavin McInnes was posted across Facebook, Twitter and YouTube by Newsmax presenter Chris Salcedo. Within a few days it had been viewed nearly 2 million times across social media, including being shared 27,000 times on Facebook and retweeted over 5,000 times on Twitter. In the interview, Gavin McInnes pushed the Enrique Tarrio narrative as evidence that the group was not racist and did not hold any white supremacist beliefs. ISD identified over 2,000 Tweets promoting this same message in the days following the debate. The video also displayed the tagline ‘Proud Boys Not A Hate Group’ and provided an opportunity for McInnes to blame Antifa and Black Lives Matter protestors for the violence Proud Boys members have been involved in. 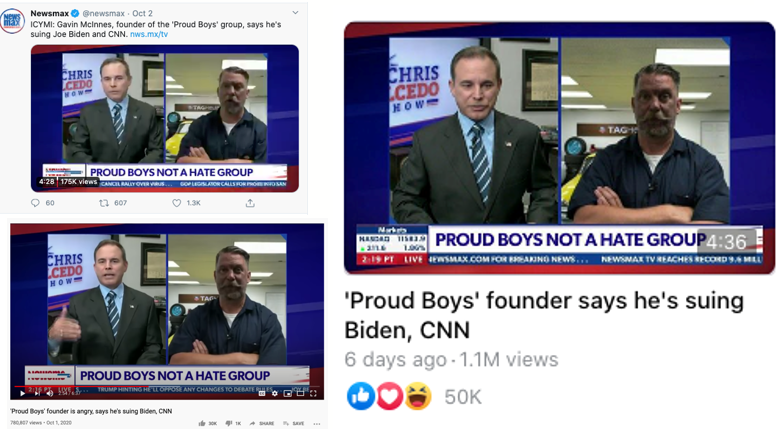 We can see from the above that creating memes and shareable content on alternative platforms allows non-affiliated accounts on mainstream platforms to post, spread and amplify messages on their behalf. As outlined above, researchers and news sites have acted as vessels for Proud Boys content and provided an easy-to-follow map for anyone curious enough to sign-up to Parler or download Telegram and join the conversation. This illustrates how the group’s messaging has reached broader audiences who might otherwise have been unable to locate its residual online presence and warrants additional consideration when reviewing the digital policies of mainstream platforms.