Over the past few months, ISD analysts have tracked the state of climate debate across a selected network of Facebook and Twitter communities in the UK. Analysts identified these communities as being bellwethers and/or key catalysts for climate disinformation and/or opposition to action on climate change in the British public sphere.

This article provides a top-line analysis of key topics discussed within this network from 25 February 2021- 3 March 2021. It examines the most widely shared posts authored by accounts in the network and the most widely shared links amongst actors in the network. The analysis highlights how anti-climate change actors have adopted an anti-government narrative to push their own agenda, whereby broad interest topics such as COVID-19 lockdowns are co-opted into narratives about climate policy.

Analysts monitored a network of accounts opposing climate change science and progressive climate policies in the UK. This network consists of 114 Twitter accounts and 85 Facebook accounts. These accounts were selected using a combination of manual and automated techniques, covering key online actors in the UK who reject mainstream climate science and/or oppose measures designed to reduce emissions. The initial, manual inputs were decided in consultation with climate sector organisations. This was followed by a period of network discovery with the help of relevant keyword searches, to widen the frame of reference.

Within this monitored network, accounts posted 27,435 times on Twitter and 3,180 times on Facebook during the period of study. Of these posts, 9% were climate-related (a total of 2,682 posts across the two platforms).

In our analysis of the top 100 climate-related tweets within the network, there were two main topics of discussion:

➜ Climate science denial (16%): Posts were widely circulated claiming that the existence of the “Little Ice Age” disproves the greenhouse effect. In addition, two older pieces of content resurfaced and appeared frequently in the dataset: a 6-year-old Forbes article rejecting the link between climate change and recent extreme weather events, and a 2009 video of former UKIP MEP Godfrey Bloom describing CO2 as a “life-giving natural gas” in the European Parliament.

➜ “Climate lockdown” (15%): Accounts opposed to climate action are increasingly pushing a narrative that elites plan to replicate COVID-19 lockdowns to tackle climate change. In our analysis, two pieces of content were particularly prominent: a hastily-deleted Tweet by the World Economic Forum stating that lockdowns were “quietly improving cities”, and a Guardian article with a headline claiming global lockdowns will be “needed” every 2 years to meet the Paris Agreement goals. 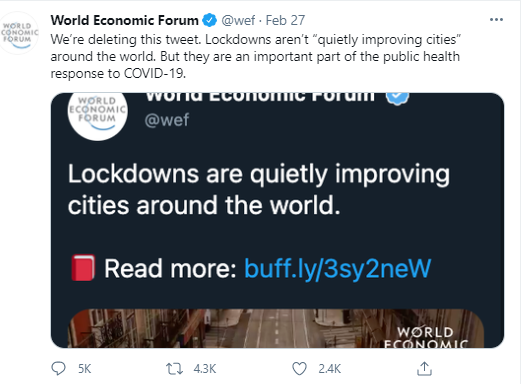 What Breaks Through: Our Network in the Mainstream

On Twitter, the two most widely retweeted posts that originated in the network promoted the idea of a “climate lockdown”, tied closely to a “Great Reset” narrative. This was the title of a World Economic Forum meeting in June 2020 and has since been seized upon by conspiracy theorists to claim the session as evidence of an elite power grab, enabled by the COVID-19 pandemic. On Twitter, the network tweeted almost twice as much about COVID-19  than climate issues: 4,106 and 2,230 times, respectively.

The top two most shared tweets originating within our network.

The next two most popular tweets were both from the Global Warming Policy Forum (GWPF), the campaign arm of a climate change sceptic think tank founded by former Chancellor Lord Nigel Lawson. The body has featured in ISD’s previous monitoring of these issues, suggesting that GWPF plays a key role within communities opposed to climate science. One tweet implied it is futile to take ambitious climate action in the West if Asian economies do not, a familiar argument used to drive opposition.

On Facebook, the most shared post authored within the network ridiculed Swedish activist Greta Thunberg, who remains a key target for climate adversaries. The subsequent three most widely shared posts were dominated by Danish commentator Bjorn Lomborg. In these posts, Lomborg criticised U.S. Climate Envoy John Kerry for alleged hypocrisy and stated that investment in “green innovation” would be more cost-effective than current climate policies adopted by the U.S. and EU, and the Paris Agreement more broadly.

COVID-19 dominated the top links shared within the network of accounts we analysed. The World Economic Forum’s aforementioned deleted tweet occupied the top spot, while their subsequent clarification of the tweet came in fourth – a sign of how widely this PR blunder was circulated. It also indicates the willingness of actors who oppose climate science to seize on supposed evidence of an approaching climate-motivated lockdown, as a means of undermining efforts to promote a “green recovery” from the pandemic.

Such efforts seem designed to pivot outrage about current government containment measures towards climate issues, including using messages around civil liberties and curbed individual freedom. This could pose a major vulnerability for the climate sector – it threatens to ‘recruit’ or funnel new audiences into the movement of those opposed to climate change science, since COVID-19 is a near-universal topic online and has sparked various grievances within different pockets of UK society.

Future communications that discuss the climate impact of governmental restrictions due to COVID-19 will need to mitigate the risk of opposition networks re-framing them as evidence of “climate lockdowns”. A simple solution would be to avoid sensationalist headlines that do not accurately reflect reality and feed into conspiratorial narratives.