In the initial weeks of the 2022 monkeypox outbreak, online conspiratorial communities discussed the disease in terms of a sequel to COVID-19, or the next stage in the so-called ‘plandemic’. Widely circulated COVID-related narratives were easily copied, pasted and adapted to monkeypox. These included claims that the disease was pre-planned as a global power grab by elites, including George Soros and Bill Gates, to introduce the New World Order, or that the outbreak had been the result of an act of bioterrorism.

Anti-LGBTQ+ narratives were already widespread within these conversations. They were used to demonize the queer community, and particularly gay men, as the source of the outbreak. As the World Health Organisation declared the outbreak a public health emergency of international concern on July 23, 2022, and infections were detected in children, anti-LGBTQ+ narratives were further developed, spreading dangerous rhetoric against the queer community. Influential figures on the far-right used monkeypox infections in children to advance the ‘groomer’ narrative that attempts to frame LGBTQ+ people as being a danger to children and part of an insidious plan to engage in child sexual exploitation.

This Dispatch explores how Twitter facilitated this trend and how the policies the platform has employed to tackle anti-LGBTQ+ hatred are failing to address the onslaught of hate campaigns directed at the queer community.

On May 22, 2022, just over two weeks after the first cases of monkeypox were detected in the UK, the Joint United Nations Programme on HIV/AIDS (UNAIDS) issued a statement outlining their concern that some reporting about the disease was “reinforcing homophobic and racist stereotypes”. The disease could affect anyone, they said, and they urged the media, governments and communities to employ a “rights-based, evidence-based approach that avoids stigma”.

Although to date the vast majority of cases have been reported among the queer male community and evidence suggests that sexual contact has facilitated the spread of the disease, monkeypox is not currently thought to be a sexually transmitted disease (STD). Dr. Peter Hotez, Professor of Pediatrics, Molecular Virology and Microbiology at Baylor College of Medicine, answered questions for ISD over email explaining, “It’s most likely not an STD in terms of sexual transmission like HIV, AIDS or syphilis, but it can transmit through close skin-skin or oral-skin contact and it so happens that it gained a foothold initially in the US and Europe through a social network of men.”

Although it has a low mortality rate, Dr. Hotez described monkeypox as a “debilitating illness” that can cause “severe pain and emotional distress” and called for urgency in containing it before it spreads to other vulnerable populations, including young children and pregnant individuals. Letting the disease become endemic in the Western hemisphere or Europe would “represent an extreme failing in public health,” he said.

On July 22, 2022 the first cases of the disease were detected in children in the US. The development was first reported by the Director of the Center for Disease Control (CDC), Rochelle Walensky, during a Washington Post Live interview. Walensky said, “We have seen now two cases that have occurred in children. Both of those children are traced back to individuals who come from the men who have sex with men community, the gay community, and so when we have seen those cases in children they have generally been what I call adjacent to the community most at risk. I should also mention importantly those children are doing well.”

Walensky’s comments provided fodder for far-right politicians, online provocateurs and anti-LGBTQ+ activists to spread hate-filled insinuations online, alleging that queer men must have engaged in sexual contact with children in order to spread the infection. This turbo-charged an already widespread reactionary campaign that is working to frame the queer community as ‘groomers’ who are abusing children.

Although these claims appeared across both mainstream and alternative platforms, the evolution of this narrative is particularly evident on Twitter, a platform that recently said using the term ‘groomer’ to describe trans and non-binary people was prohibited and violated the platform’s hate speech policies. The ease with which disinformation and hateful anti-LGBTQ+ narratives took over the conversation about monkeypox and children on Twitter highlights just how ill equipped the platform is to respond appropriately to emerging narratives aimed at degrading already-marginalized communities.

In the space of just one week on Twitter, discussions about how monkeypox could affect children1 shifted significantly. Between July 18 and 21 (see figure 1), conversation was mostly dominated by efforts to clarify the manner in which the disease is transmitted, and urge a greater public health response due to the potential for the disease to spread widely within community settings such as daycares and schools. By July 25 (see figure 2) the conversation had descended into a public health disinformation campaign that framed the virus as an STD and aimed to further anti-LGBTQ+ hatred by linking cases in children to sexual interactions with queer men.

Figure 1: Trending phrases in Twitter conversation about monkeypox and children between July 18-21, 2022.

Figure 2: Trending phrases in Twitter conversation about monkeypox and children between July 21-25, 2022.

The following graph indicates that Twitter posts linking monkeypox and children in the same week peaked in volume several times, each driven by different shifts in the public health conversation. These peaks are analyzed in greater depth below.

Figure 3: Volume of conversation on Twitter mentioning monkeypox and children between July 18 and July 25, 2022.

A spike in conversation on July 19 was driven by tweets urging the public to take monkeypox seriously and become aware of how the disease is transmitted. Highly engaged tweets on this day warned against trying on clothes in stores, debunked claims that monkeypox is an STD, alerted people to its potential to wreak havoc if it began to spread in schools and daycare settings, and warned about the increased risk if contracted by young children, pregnant, or immunocompromised individuals.

Figure 4. Tweet warning against trying on clothes in stores to prevent monkey pox.

This trend continued on July 20 with a spike on this day attributed to a tweet that said, “i had to tell a room of adults that monkey pox was not a gay community disease and that it was over for all of us as soon as little children catch it and suddenly it got really quiet.” Although in terms of engagement this tweet dominated discussion, there were also signs of tweets downplaying the risk to children and promoting anti-LGBTQ+ slurs about children’s infections gaining in popularity on that day. 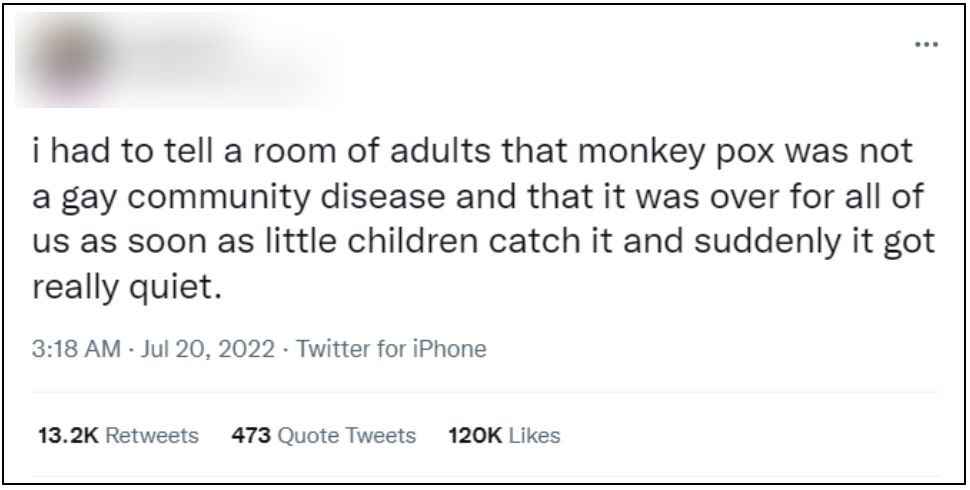 Figure 5. Tweet explaining that monkeypox is not a “gay community disease” and warning about the consequences of children catching it.

A spike on July 22 coincided with the breaking news about the first infections being detected in children in the US. Replies and quote tweets to one tweet in particular, from ABC7 Eyewitness News, falsely linked the infections to children being sexually abused by queer men, prompting ‘groomer’ comments. This led to the tweet being included in Twitter’s trending topics under the word ‘groomers’ and signified the direction the conversation would take in the days following. 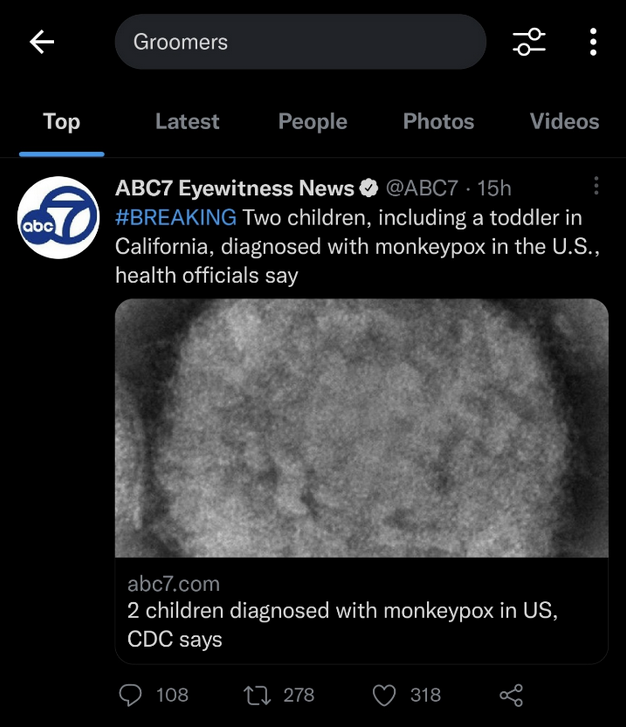 July 23, the day the World Health Organisation designated monkeypox a public health emergency, saw the largest spike in conversation with total volume increasing by 3,915%. The top tweet on this day came from Congresswoman Marjorie Taylor Greene who shared a video clip of CDC Director Rochelle Walensky’s comments on the infected children along with the caption, “If Monkeypox is a sexually transmitted disease, why are kids getting it?” The video was viewed more than a million times. Although other highly engaged tweets on this day, from Dr. Tom Frieden and Dr. Eric Feigl-Ding, urged for a better widespread public health response to the outbreak, Marjorie Taylor Greene’s tweet eclipsed these in terms of engagement, receiving four times as many retweets and quote tweets as Dr. Feigl-Ding and Dr. Frieden’s tweets combined. 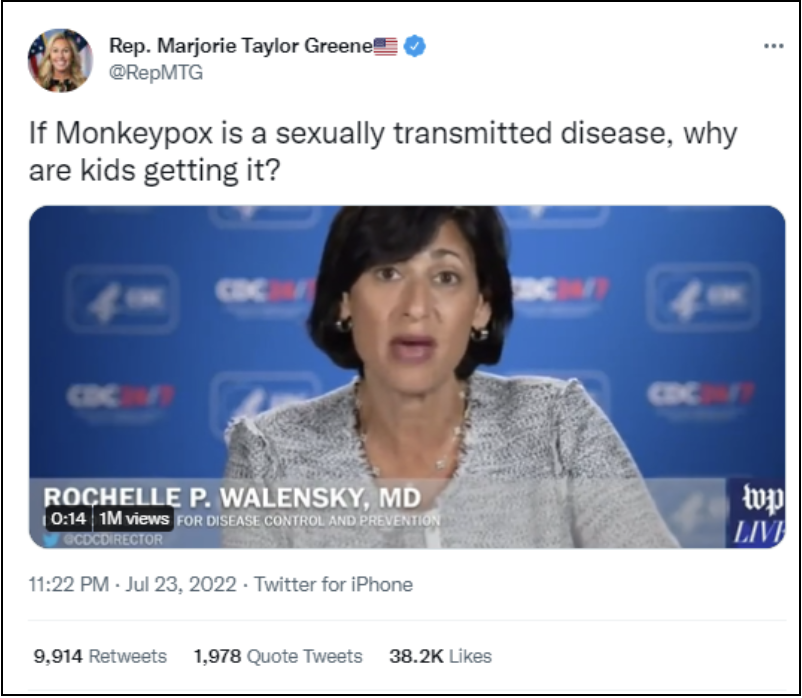 Figure 7: Top tweet in conversations about monkeypox and children on July 23.

By July 25, conversation was dominated by disinformation and anti-LGBTQ+ hate, driven by known far-right figures. Many of these, including Jack Posobiec, Ian Miles Cheong and Errol Webber, took the lead from Marjorie Taylor Greene’s tweet by employing a ‘just asking questions’ approach. This is a common tactic among disinformation purveyors who ask leading questions in order to spread a malicious claim, while disingenuously employing the defense that they are simply ‘asking questions’. 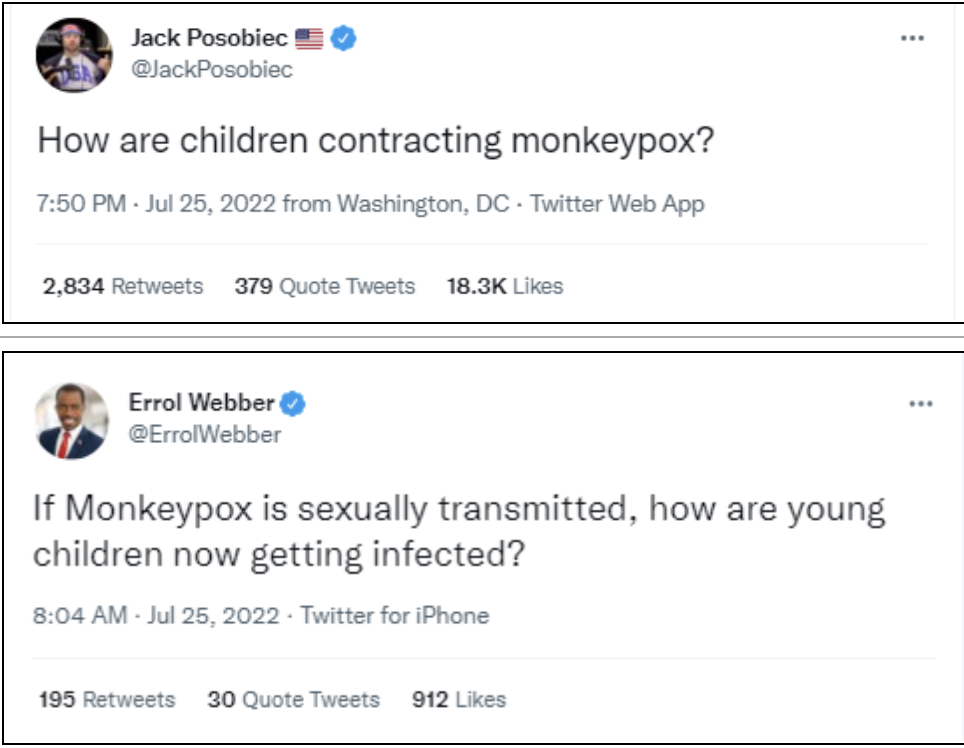 In a statement to the Daily Dot about the use of the term ‘groomer’ on its platform, Twitter said that it is “committed to combating abuse motivated by hatred, prejudice, or intolerance, particularly abuse that seeks to silence the voices of those who have been historically marginalized.” Yet, the platform has taken little action to halt some of the most influential accounts spreading anti-LGBTQ+ hatred.

The account Libs of TikTok boasts a Twitter following of more than 1.3 million and has become a pivotal force spreading anti-LGBTQ+ and ‘groomer’ theories. The account copies social media posts from liberals and queer people, framing their content in a way that, as described by the Washington Post, “fuel[s] the right’s outrage machine.” These tactics also result in the people featured in the posts being targeted with abuse, hatred and harassment from Libs of TikTok followers.

In another instance of Twitter allowing accounts to gain popularity through spreading ‘groomer’ rhetoric, a group that represents a coalition of conservative gay people who say they “oppose the recent trend of indoctrinating and sexualizing children under the guise of ‘LGBTQIA+’” has been able to build an audience of almost 60,000 followers in just two months. The group’s leader has compared doctors treating patients with gender-affirming healthcare to Nazi ‘Angel of Death’ doctor Josef Mengele, and denied the existence of trans children. When Twitter announced the banning of the word ‘groomer’, the group simply amended the handle on their profile from ‘groomers’ to ‘grms’. At the time of writing, the organization was also using the tip collection function on Twitter to raise funds.

Twitter has said that the term ‘groomer’ is “prohibited…when it is used as a descriptor, in context of discussion of gender identity.” It is immediately clear that this policy, and the platform’s effort to enforce it, do not go far enough. The ease with which the above disinformation and hate campaign related to monkeypox spread on the platform, and the lack of action taken by Twitter on accounts that are leading the charge, show that prohibiting ‘groomer’ content based on a tight set of parameters related to its use against trans and non-binary people will do little to impact the spread of anti-LGBTQ+ hate. The campaign to denigrate the queer community and to frame them as a danger to children goes beyond using the term ‘groomer’ in relation to gender identity. The rhetoric related to monkeypox exemplifies the opportunistic nature of those campaigning against LGBTQ+ rights and shows the need for policies that work effectively to protect vulnerable communities.