Following the Russian invasion of Ukraine, the right-wing populist Fidesz government of Hungary appeared to soften its 12 years of pro-Kremlin foreign policy, siding with Western allies’ efforts against Russia. However, this change was not mirrored by the media connected, directly or indirectly, to Prime Minister Viktor Orbán’s regime. Instead, pro-Kremlin propaganda narratives were echoed and amplified, without any mention of Russian responsibility, while casting the opposition as wanting to push Hungary into the neighbouring war.

In this Dispatch we examine the coverage of the invasion in Hungarian state-linked media outlets and government-friendly pundits, and what implications this may have for the upcoming election on 3 April.

Since 2010, Orbán’s foreign policy has been widely characterised by its close ties to the East, often being described as Russia’s and China’s Trojan horse within the EU. Through the Eastern Opening Policy, the Fidesz government sought to enhance diplomatic and economic cooperation with Eastern countries, particularly with the Russian and Chinese administrations.

With Russia specifically, Hungary has become reliant on their energy imports over the last 12 years. Their friendly relationship goes further: just weeks before the invasion began, Fidesz party leader Orbán met with Vladimir Putin in Moscow. A few weeks before that in December 2021, the Hungarian Foreign Minister Péter Szijjártó was awarded the Russian Order of Friendship, a high-level state decoration. In general, official government communication, as well as portrayal on state-affiliated media, has been openly friendly towards Russia. In contrast, Western allies have been subject to sharp criticism, with campaigns dedicated to smearing Brussels. 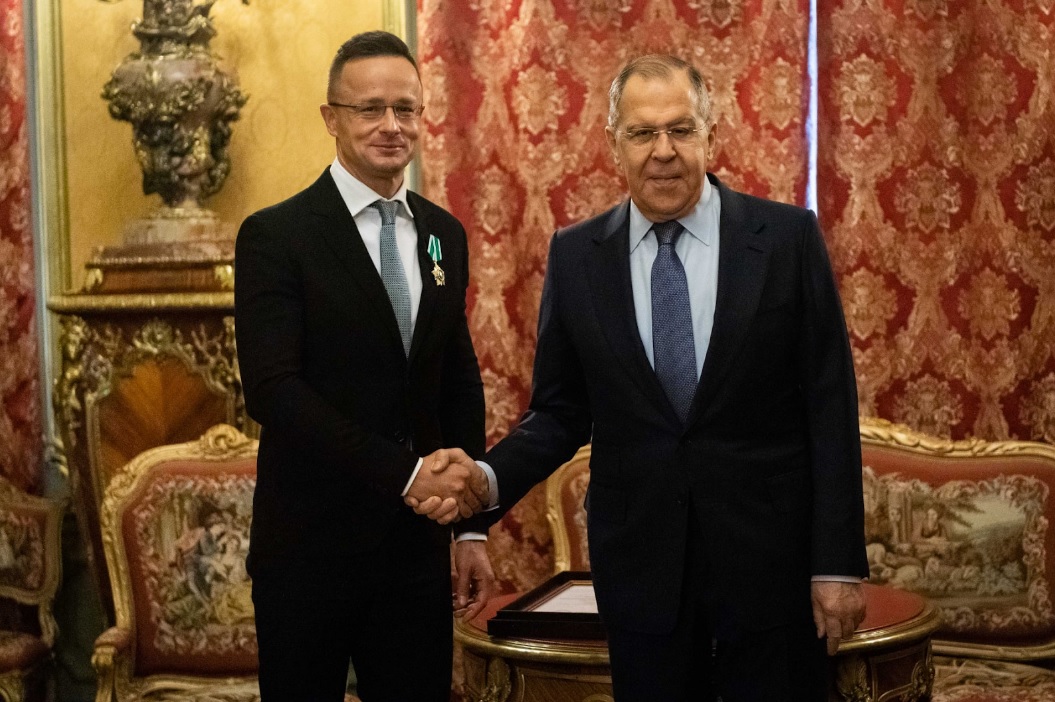 This foreign policy direction was abruptly halted when Russia began its invasion of Ukraine, which forced the Fidesz government to side with European and NATO allies. Hungary supported all sanctions and even backed Ukraine’s bid for membership into the EU. However, Fidesz clearly still aims to maintain its “friendship” with Russia, after moving to ban any transit of weapons through its territory, and later announcing it will not support sanctions restricting Russian energy imports, an airspace blockade over Ukraine, or a peacekeeping mission.

Amid these developments, state-backed media and regime-connected pundits make a useful target for analysis.

Before the war: blaming the United States

In the lead up to the invasion, state-linked media claimed that the US wanted to escalate the conflict for its own benefit. The US, they claimed, provoked Russia and Ukraine, pushed for an armed conflict, created unnecessary hysteria and pressured its allies to take action against Russia.

This sentiment was echoed by pro-government experts on TV, who claimed that “even a fool knows” that Russia would not attack Ukraine, and that the war was only kept at bay due to Orbán’s intervention during his Moscow visit. These same experts broadcast jokes by Russian government figures asking Western media to make the invasion date known so they could plan their vacation days, and later were quick to call out the “failure” of the CIA to foresee the date of the attack.

Zsolt Bayer, a founding member of Fidesz, popular political commentator and ardent supporter of the current administration, went further by claiming that “today, Ukraine is a puppet state created and operated by the CIA.” Another right-wing commentator Kristóf Trombitás published an editorial with the title “To stand with Ukraine is treason”, which was later changed to “To stand with Ukraine?”. 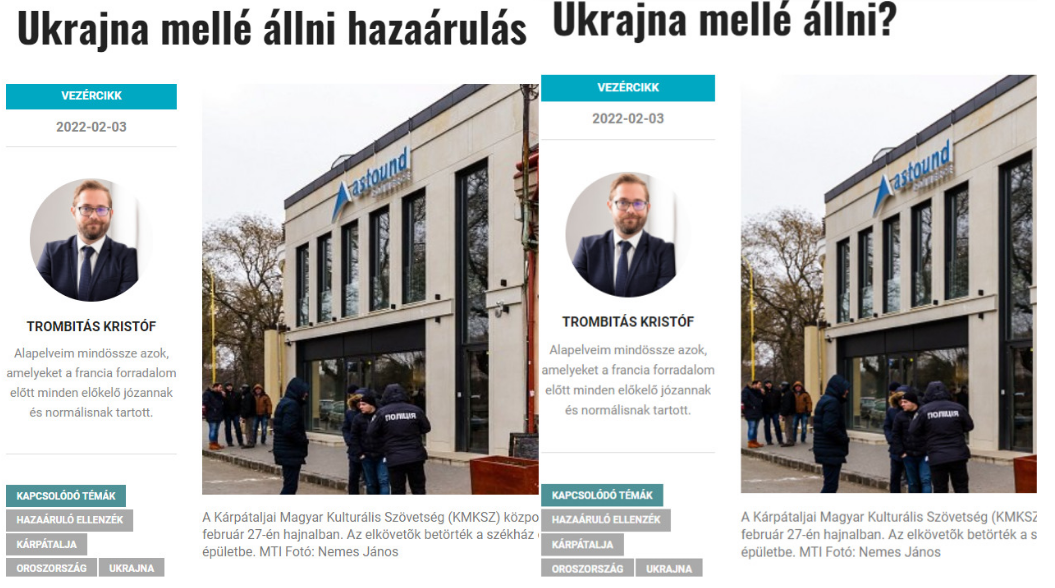 After the invasion: Pro-Kremlin narratives persevere

In the first few days of the invasion, the media aired messages backing and justifying Russian actions, consistently describing the events as a ‘military operation’ in line with Putin’s language used to play down its invasion. The Guardian found that the term was used 431 times in the first five days of the attack by the Hungarian state news agency.

A variety of pro-Kremlin narratives were echoed by both public broadcasting news, private media outlets and pundits, who claimed:

Pundits also accused Ukraine of committing genocide and developing or obtaining nuclear weapons – a red line for Russia. Another pundit argued that in fact, Ukrainian people and culture do not exist –  Ukrainian is just a dialect of Russian.

Messages blaming the West were also spread, claiming that the US wanted to “separate” Ukraine from Russia and that NATO failed to be mindful of Russia’s security concerns. Another “leading foreign policy journalist” argued that by sending arms to Ukraine, the West is only prolonging the war, while others went further, claiming that the US provoked not only the current conflict but also both World Wars.

The fight for public opinion: Orbán versus the opposition

With the parliamentary elections a week away and the united opposition polling only slightly behind Fidesz, communication around the war has become a battleground. Fidesz accuses the opposition of “being on the side of war”, a phrase introduced by Orbán and since uniformly repeated by Fidesz politicians, state-linked media and pundits. The main message being that the opposition, a six-party coalition running on a common list against Fidesz, would send troops and arms to Ukraine – a completely fabricated claim.

In contrast, the Fidesz government aims to portray itself as the defender of peace and security. The term “strategic calmness”, again coined by Orbán, has been used to describe the position of the government and to reiterate that Orbán is the calm, level-headed leader the country needs in times of crisis. The Ukrainian Ambassador to Hungary starkly criticised Hungary for its position of “strategic calmness”. In response, political commentator Zsolt Bayer wrote that the ambassador should be expelled within 48 hours for her comments.

Meanwhile, some opposition politicians called for sanctions on energy imports from Russia, giving Fidesz another line of attack to claim that the opposition would make the Hungarian people pay for a conflict they are not involved in. Foreign Minister Szijjártó asserted that the question of energy imports is not ideological or philosophical, but instead an economic one, and they will protect the Hungarian people from rising costs. 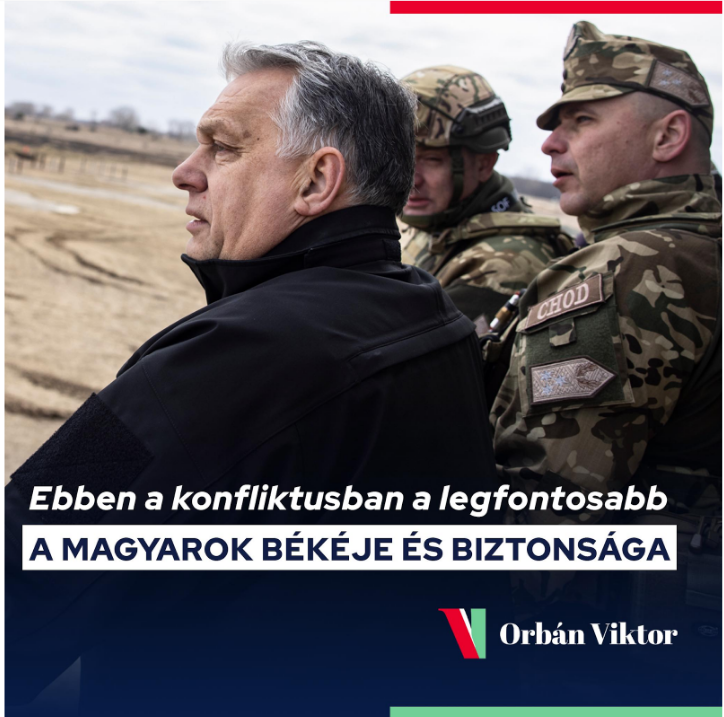 Image 3: “In this conflict, the most important is the peace and security of Hungarians” (source: Viktor Orbán’s Facebook page).

Criticism of the opposition has become central in communications around the war in the lead up to the election. The media is spreading pro-Kremlin narratives, while mirroring Orbán’s claims that the opposition is attempting to push Hungary into the conflict. This messaging may be working, as a recent public opinion poll shows that only 44% of Fidesz voters condemn the Russian aggression, while a quarter of them blame Ukraine. How the current conflict will influence the election outcome and Fidesz’s relationship with Russia remains to be seen, but if the past couple of weeks are any indication, it is highly likely that Fidesz – the current Parliamentary majority that has also just inaugurated Katalin Novák as President for the next 5 years – and by extension its media, will continue to teeter between its Western allies and Russia.

Kata Balint is an Analyst in the Digital Analysis Unit at ISD.