TikTok Sounds are being used to create and popularise misleading and harmful COVID-19 related content on the platform, in particular discouraging people against getting vaccinated. Much of the harmful content being shared is based on alarmist allegations and previously debunked claims.

ISD analysts have found that misleading anti-vaccination clips are spreading on TikTok, sometimes targeting people of colour (POC) communities and even being promoted by healthcare professionals. Comparable to the unattributable voice messages that spread like wildfire on apps like WhatsApp, vaccine misinformation TikTok Sounds operate like viral chain messages, with the origin of claims and content often obscured by the platform. This means that deceptive information is able to spread unchecked.

124 TikTok videos featuring Sounds containing vaccine misinformation were reviewed as part of this analysis. ISD found that these videos generated:

Only 2 of the 124 videos featured a tag from TikTok advising people where they can access factual information about COVID-19, as seen in the screenshot below.

Fig 1: An example of a video analysed that featured an official tag from TikTok advising users where they could access factual information about COVID-19.

Like any video platform, audio is central to the user experience on TikTok. Songs, music, clipped fragments of  popular TV shows or films, the sounds from a camera recording — these all make up TikTok Sounds. Sounds are used to express creativity and create trends around specific clips, and are used by channel creators to strategically promote their content. However, they are also open to misuse and abuse.

In December 2020, a TikTok user posted a video (since removed) in which they promoted vaccine hesitancy and misinformation in support of their decision not to take a COVID-19 vaccine. In their video, the TikTok user said:

This user’s claims are overly simplistic and misleading. There is continuous research into and development of  vaccines against HIV and the common cold; there is not just one type of cancer; and vaccines are used to treat various forms of cancer like prostate and skin cancer.

However, what makes this case particularly notable is the way this misinformation is spreading on TikTok. As with any platform, videos are regularly posted on TikTok in which people share their opinions or speak in a testimonial style about their experience of a situation. Other TikTok users can then create their own videos using these Sounds. Videos can be duetted or stitched (shared) and trends quickly form.

Despite the video no longer being available, the Sound from the video (i.e. the anti-vaccine comments) is still available for use by others and has been extremely popular on TikTok, featuring in over 4,500 videos, according to the live page on TikTok. The top 25 videos listed on the TikTok page for this Sound have been viewed a collective 16.7 million times. 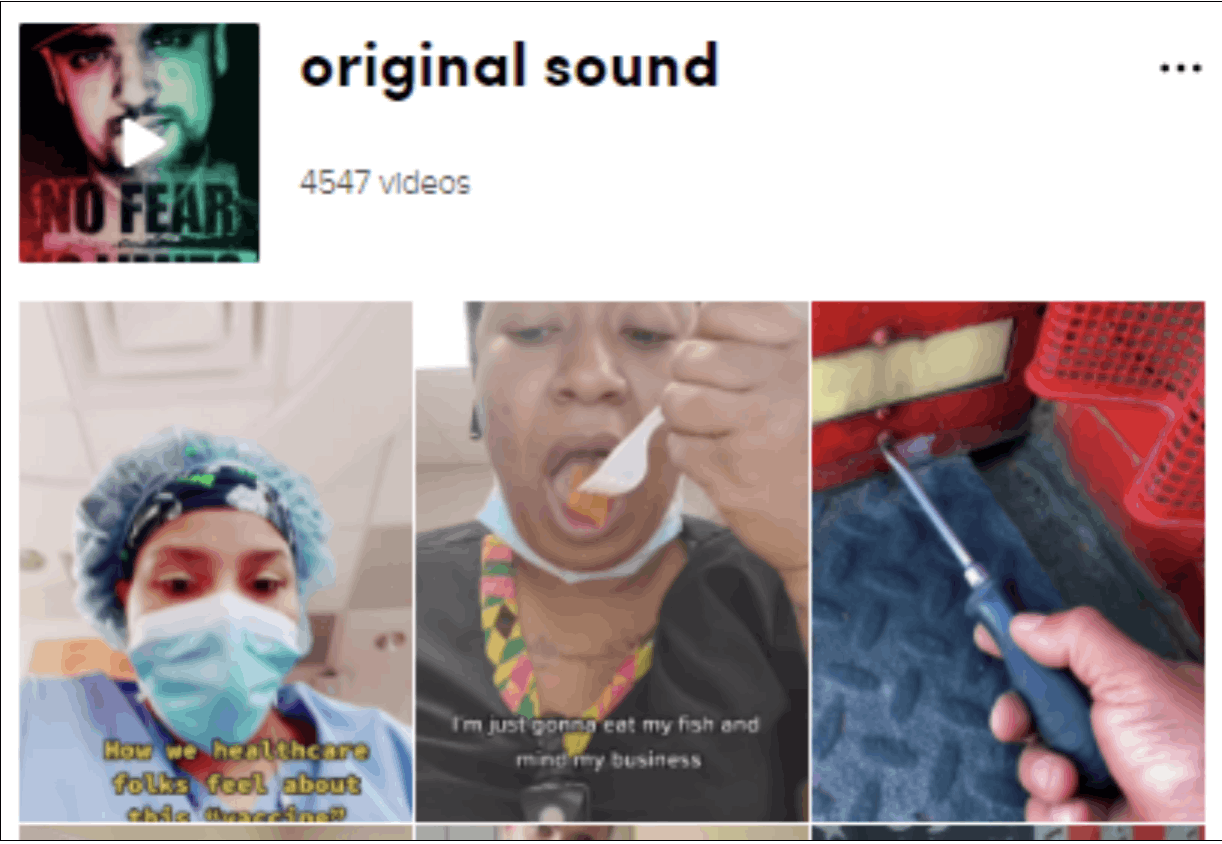 Of the 25 videos using this Sound, only one video features an additional tag from TikTok advising people where they can access factual information about COVID-19. It is important to note that some of the videos using this Sound highlight or criticise the misinformation as a means of countering the misleading content, including one that has been viewed 116,700 times and appears in the top 25 videos.

Videos that feature this audio typically play the Original Sound while the creator agrees with the TikTok user’s statement, sometimes adding their own caption or on-screen text signalling their support for the anti-vaccination sentiment. The comments on these videos feature similar statements, all serving to reinforce anti-vaccine narratives among TikTok users.

The trend is popular with people from a range of ethnic and professional backgrounds, highlighting the challenge of effectively tackling COVID-19 vaccine skepticism, hesitancy and misinformation on an app with such a large and diverse user-base. Moreover, some users have created videos with this sound in which they translate the audio into other languages. For example, versions analysed by ISD in this research included Spanish, Latvian and Indonesian translations.

Perhaps most concerning is that some of the most-viewed videos using this Sound appear to come from healthcare workers. They are seen in these videos promoting anti-vaccine statements whilst wearing medical equipment or posting these videos whilst seemingly at work. This serves to potentially add credibility to the anti-vaccination sentiments expressed by way of their professional background. For example, the video featured in the screenshot below has been viewed 3.5 million times. 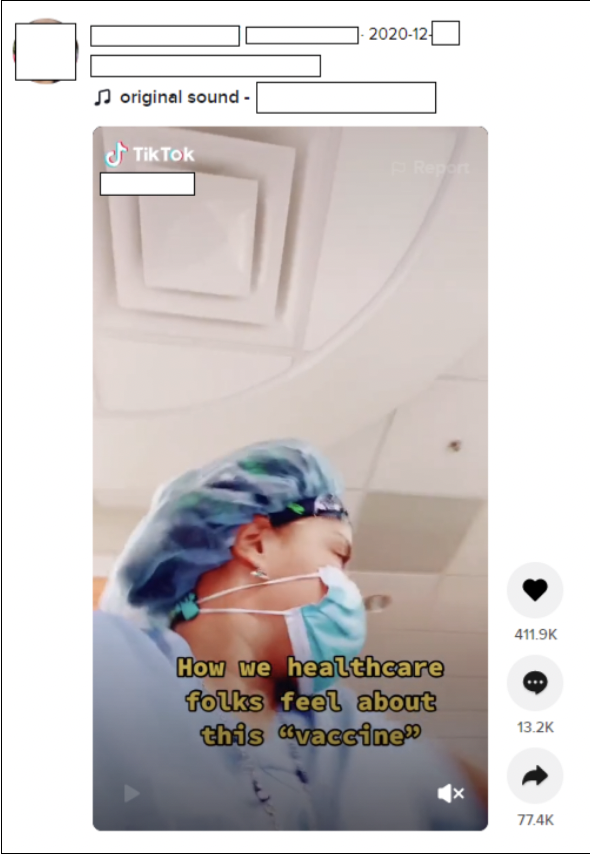 Other TikTok Sounds Being Used to Spread Vaccine Hesitancy & Hostility

There is evidence that TikTok Sounds are forming the basis of videos that are being used to spread specific misinformation concerning vaccines and the Black community. A video posted online in December 2020 showed a Black woman who claimed to be a nurse and allegedly developed Bell’s palsy after her vaccination. The Associated Press fact checked the video and rated it as “false,” saying there was no nurse registered under the name the woman gave in the video.

The video was posted on TikTok by a user who added an on-screen caption saying “they want black people to take it first for a reason,” raising the suspicion that Black people were being deliberately targeted to take vaccines before other people. Like the example above, while the original video featuring the Original Sound is no longer available, the Sound is and can be used in new videos. To date, the video has been used in at least 25 videos, none of which feature any additional tags directing users towards factual information about COVID-19. None of the videos have been viewed more than 1,000 times, yet the Sound has still been used to discourage people from being vaccinated. 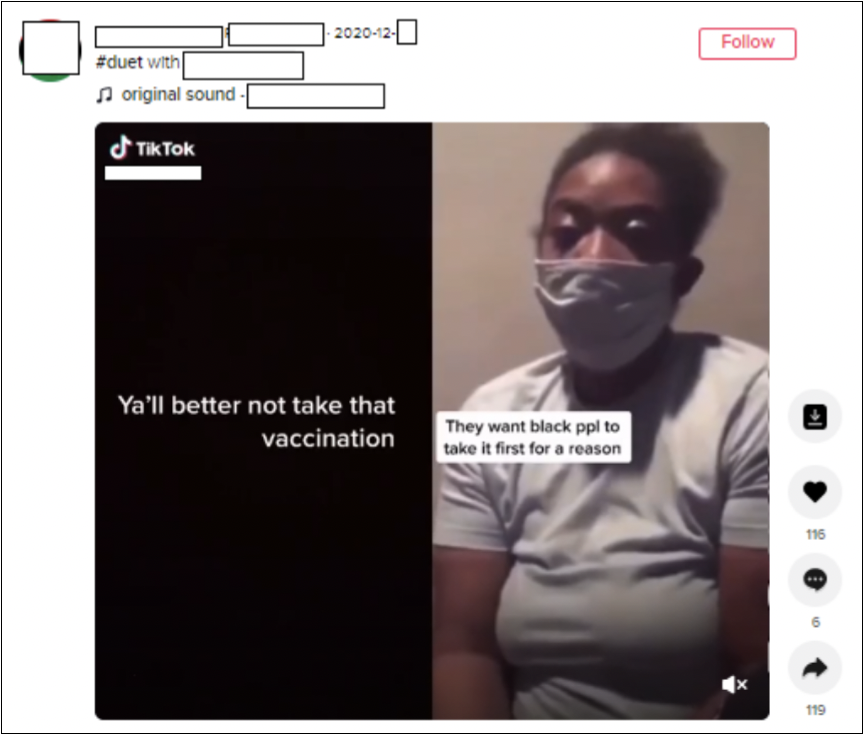 Another widely-used TikTok Sound features a different woman who also claims to have developed Bell’s palsy after receiving the vaccine. The CDC has said that cases of Bell’s palsy were reported following vaccination in participants in the COVID-19 vaccine clinical trials, however the number of cases are not considered to be more than the rate expected in the general population.

This TikTok user’s video is still live and has been viewed 1.4 million times to date. The user does not advocate against getting the vaccine in her video, but others using the Sound to create new content are  using her experience as the basis to say they will not be getting vaccinated. To date, the video has been used in at least 48 videos, none of which feature any additional tags directing users towards factual information about COVID-19.

However, other TikTok users are co-opting Sounds such as this one to counter videos that promote vaccine hesitancy, which highlights one way in which to flag and challenge misleading content on the app. For example, a TikTok user who works as a pediatric emergency doctor posted a rebuttal using the original Sound. In doing so, this user ensured that others who were browsing the Sound in question would also encounter their video which explained that the CDC-issued information about clinical trial participants experiencing Bell’s Palsy only occurred in some instances.

Another Sound that has proven highly popular in promoting anti-vaccination sentiments features a person who cites data collected by the US Vaccine Adverse Event Reporting System (VAERS) to claim that 2,342 people have died from receiving COVID-19 vaccines. This is false, as noted by Reuters in April.

Again, the original video featuring the Sound is no longer available on TikTok. The user who posted it states that it was taken down by TikTok in April for “community violations”. However, the Sound is still available and can be used in new videos. Though the video was removed sometime in late April, ISD discovered videos posted as recently as 1 July using this Sound. According to TikTok, a total of 372 videos have been posted using this Sound but, again, no videos feature any additional tags from TikTok advising people where they can access factual information about COVID-19.

TikTok Sounds that feature audio of people making misleading and deceptive claims about COVID-19 vaccines form a large component of videos on the app and are being viewed millions of times. In a December 2020 update, TikTok stated that the platform was introducing “a new vaccine tag to detect and tag all videos with words and hashtags related to the COVID-19 vaccine.” On 21 December 2020, TikTok said it would attach a banner to these videos with the message ‘Learn more about COVID-19 vaccines,’ redirecting users to verifiable, authoritative sources of information. However, ISD has observed that most videos promoting such content do not contain these flags. While there are signs that TikTok does take some action against prominent videos containing misleading vaccine Sounds, the platform is failing to halt the spread of vaccine misinformation trends that arise using these Sounds after the original video has been removed.

Public health officials across the world are unanimous in their belief that high uptake rates for COVID-19 vaccines are key to ending the pandemic and factual, simple communication is central to this. While social media platforms have taken steps to ensure fact-based, authoritative information about COVID-19 and vaccines is available to users on their platforms, misinformation thrives when action is not taken against bad information. Conspiracy theorist influencers and communities on social media platforms are using, misusing and abusing platforms like TikTok to produce and promote harmful and misleading content about COVID-19. It is vital that platforms act quickly to mitigate such activity when it is identified to ensure that users are not being misled or misinformed.