In the midst of the Black Lives Matter protests a conservative news reporter shared an explosive video. It showed a mob savagely beating a man splayed across the sidewalk in Dallas, Texas. A narrative took hold: this was an innocent man being beaten – some said even to death – for defending his business.

Then Donald Trump amplified the claims.

But context and detail were entirely absent. Without these, content takes on a life of its own, especially online.  A fake story can go viral in just hours – and reach the very highest levels of society.

Here is what really happened: A cautionary tale for our times.

On May 30-31, the media and the US president amplified an edited video of a mob viciously beating a man for, allegedly, defending his business with a machete in Dallas, Texas. There were even false claims that the man had died. No attempt was made to verify the facts.

It soon emerged that the video was edited and didn’t contain the crucial moments leading up to the beating. When a video with these was released (an hour and half after the initial one) it showed the man running toward a group of protesters wielding a large knife.

Despite the full video being released, claims of the man’s innocence and death continued to spread widely in online conservative circles, with The Daily Mail and TMZ further amplifying them.

The man later identified himself online saying that he thought he would “take a chance” in defending a local bar that he loved using the machete, which he claimed could “absolutely kill a man.”

The 24-second video that kicked off this narrative was posted to Twitter by Elijah Schaeffer, a reporter with the conservative media outlet, The Blaze. In the video, which at the time of writing has been viewed more than 35.3 million times, a crowd of alleged protesters can be seen severely beating a man as he lies on the ground. The protesters disperse and the camera lingers on the man’s crumpled, bloodied body lying on the pavement.

Schaeffer posted the video with the caption: “It appears he attempted to defend a shop with a large sword. Looters ran at him, then he charged rioters. They then beat him with a skateboard and stoned him with medium sized rocks.”

An hour and a half later, Schaeffer posted a longer version of the video, which shows the man running at a protester wielding a large knife. It is these actions that lead to the beating seen in the first video. This video, by comparison, has been viewed only 3.7 million times at the time of writing.

A further video recorded by an eyewitness showed that the man had initially “pulled a sword on a teen skating ahead of the protesters.” Onlookers then stepped in to defend the skater, resulting in the man’s beating.

Schaeffer’s initial narrative, which portrayed the man as largely an innocent victim, clearly failed to portray the full reality of the incident. The result was an erroneous narrative that took hold across social media and beyond.

A musician called Mark Kendall shared the video on Twitter with the caption, “This man was protecting his business and was stomped and stoned by Antifa now in critical condition.” Kendall’s tweet has since been deleted, but not before being shared by President Trump, who added, “SO TERRIBLE! Where are the arrests and LONG TERM jail sentences?”

Trump also mentioned the incident, describing the man as innocent, when speaking about the protests on June 1. The man was, he said, “left dying on the street”.

In a statement to The Intercept, Dallas Police said that he was “carrying a machete to protect his neighbourhood from protesters”. But the narrative that the man was defending his own business continued to spread.

Dallas Police also confirmed that the man had been treated by volunteer medics at the scene and was then taken to hospital where his condition was described as stable.

A number of media outlets, both conservative and mainstream, inaccurately reported the story. See a selection of these below.

Rumours of his death were exaggerated

Rumours that the man in the video had died as a result of his injuries began to spread after the first video was posted online. Initially, mentions of his death were speculatory due to the violent nature of the beating he had received (see examples here and here), but this narrative quickly changed to one that treated his death as fact (here and here).

This narrative was also spread by verified Twitter users, including conservative political commentators Mike Cernovich and Ryan James Girdusky, who received 1.9k retweets on his tweet stating that it “looks like a mob just killed a man trying to defend his store”. Five minutes later, Girdusky tweeted again saying “he may have survived”. This tweet, in comparison, received just 213 retweets.

Approximately 12 hours after the incident, a tweet posted by the Twitter user @DazeTom said that the man had died, citing “inside sources in #Dallas EMS and DPD”. Although the tweet only received 20 retweets, a screenshot of the tweet circulated on Facebook, receiving significantly higher interactions. 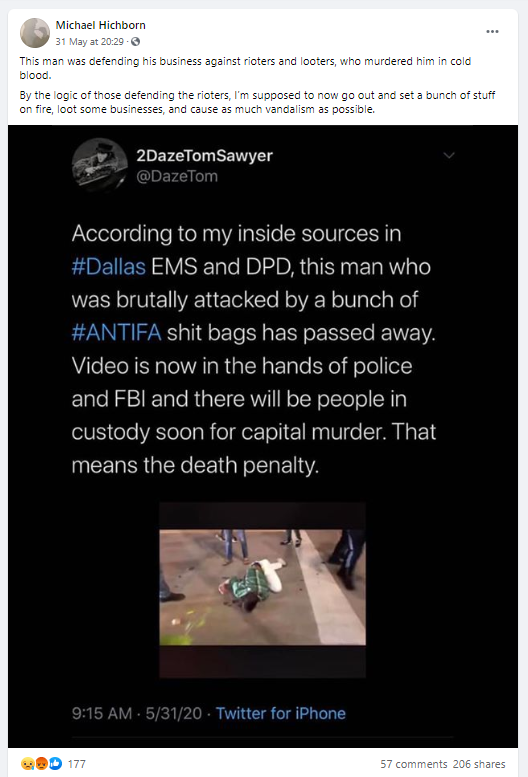 Despite confirmation that the man in the video had survived, the death narrative continued to circulate widely online over the following days, (see here and here), including a tweet on June 2 from Buzz Patterson, a Republican candidate for congress in California.

Who is Charles Shoultz?

A number of hours after the incident, a Twitter account under the name C.A. Shoultz posted a tweet thread identifying himself as the man in the video. The account has since been deleted, but archived versions of the tweet reveal that he said: “So, hey, funny story. The guy in this video getting his ass kicked? That’s me.😬 I had a bit of an adventure this evening trying to protect a bar I love, one that ended with me in the hospital. But I am quite alive, if a bit worse for wear.”

He continues by saying that he uses the machete for “home defense” and thought that he would “take a chance” to use it to defend his neighbourhood. 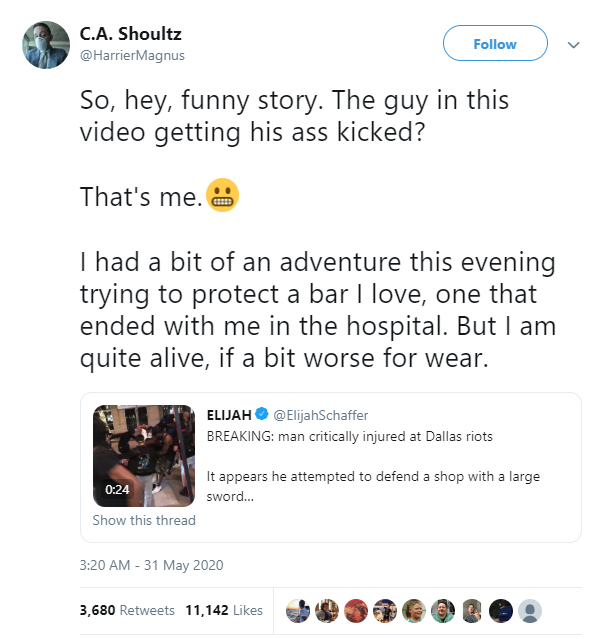 C.A Shoultz claiming the is the man being beaten in the video.

An archived tweet May 29 the account shows him tweeting about keeping a machete under his bed for home defense saying that he could “absolutely kill a man with it if he’s not wearing armor.”

Another archived tweet from May 27 references anonymous posts allegedly made by Shoultz on 4chan.

The account and tweets were used by a number of media outlets to confirm Shoultz as the man in the video, including BlackSportsOnline and the Fort Worth Star-Telegram, however there have been no official reports confirming his identity.

Aoife Gallagher an Analyst on ISD’s Digital Research Unit, focusing on the intersection between far-
right extremism, disinformation and conspiracy theories and using a mixture of data analysis, open source intelligence and investigative techniques to understand the online ecosystem where these ideas flourish and spread. Previously, Aoife was a journalist with the online news agency, Storyful and has completed an MA in Journalism from TU Dublin.

This October marks Black History Month in the U.K., a time to recognise and celebrate the contributions and achievements made by people with African and Caribbean heritage to British history, society and culture. In light of a turbulent year where the death of George Floyd and Black Lives Matter protests across the world have brought systemic racism to the very forefront of the public eye, Black History Month is more important than ever if we are to confront and learn from the past.

You can find resources with more information about Black History Month on the official website, and more wide ranging resources about Black history, systemic racism and the Black Lives Matter movement here.