Since January 2021, ISD has been monitoring online discussions around climate change across the Visegrad 4 (Czech Republic, Hungary, Poland, Slovakia). In Poland, a key finding has been the prevalence of decarbonisation-related arguments which justify a delay in climate action through pointing to alleged double standards amongst major European and global economic powers.

Fringe actors draw on historical and contemporary grievances towards Germany in particular, portraying decarbonisation as an EU plot orchestrated by Berlin to destroy the Polish coal sector. The case of the Turów mine and power station is a poignant one, demonstrating how easily such fringe narratives can enter mainstream political discussion.

The Polish-Czech dispute over the Turów mine

In February 2021, the Czech government announced that it would be taking an ongoing dispute with Poland over the Turów lignite mine to the European Court of Justice (ECJ). Poland is the EU’s most coal dependent nation and the open pit mine generates as much as 7% of the country’s electricity. Operated by the Polish state owned company Polska Grupa Energetczna, the mine sits on the border between northern Czech Republic, eastern Germany and southwestern Poland, and has been accused by the Czech government of breaching EU environmental procedures and draining Czech groundwater supplies.

On Friday 21 May 2021, news broke that the ECJ had granted an interim measure to suspend mining operations until a verdict could be reached. The order resulted in uproar on social media and the Polish government refused to comply with the ruling, stating that negotiations were being planned with Czech authorities. On Monday 24 May, at a European Council summit in Brussels, Polish and Czech representatives attempted to find a resolve to the matter.

While Poland’s initial furor over Turów lasted only a weekend, and the conflict might now be on the way to a diplomatic solution, the social media reaction to the ECJ’s ruling is nonetheless indicative of the narratives driving Polish debate on climate.

Fully fledged climate change denial is becoming increasingly rare in Poland, as in many other EU contexts. Denial is still finding its market niche – most recently, prominent libertarian pundit Łukasz Warzecha published a frontpage story with the right-wing weekly Do Rzeczy, in which he claimed to debunk ‘climatism’. The majority of online debate around coal phase-out, however, does not touch on climate change at all, focussing instead on energy security and sovereignty.

In this context, stalling other measures aimed at protecting the climate is a far more prevalent approach discussed online. There are three main narratives that fall into this category:

➜ Even among mainstream actors fully cognisant of climate change and the need to decarbonise, many heap criticism on the German energy transition as being too dependent on Russian gas.

➜ On the edges of the political mainstream and among fringe actors, such legitimate criticism extends into a narrative defending the Polish coal sector, promoting stories that suggest widespread double standards exist among European countries. Why should Poland close its mines, if the United Kingdom is considering opening a new one? Why can’t Poland build new coal power plants, if Germany just recently did the same? We saw this very clearly in a New York Times article critical of Japan’s increase in coal power following the Fukushima disaster, which far-right accounts turned into a widely-shared call for Poland to follow Japan’s lead. 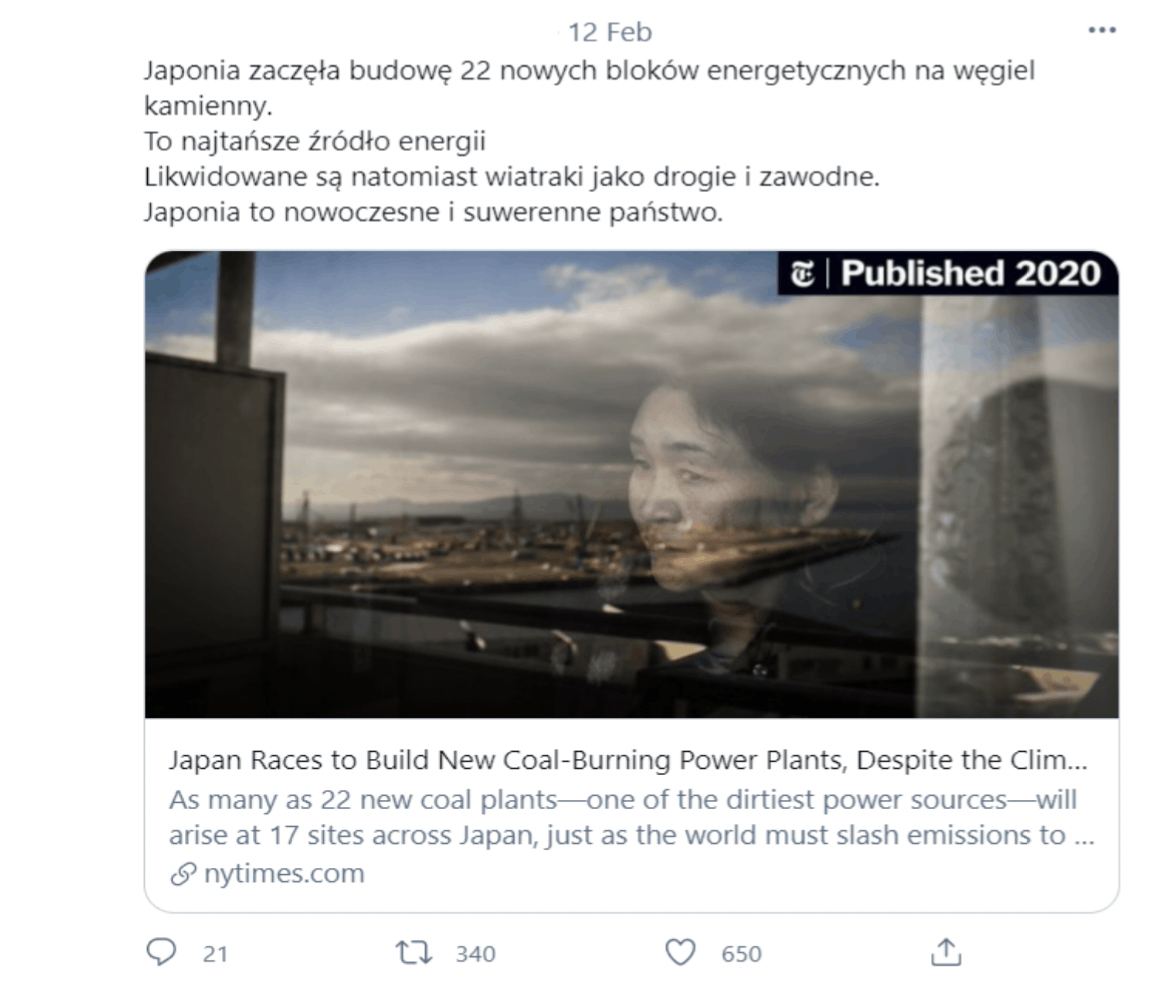 Translation: “Japan started the construction of 22 new power units [based] on hard coal. This is the cheapest energy source. Instead, wind turbines are liquidated as expensive and unreliable. Japan is a modern and sovereign country.”

➜ Other posts try to undermine the reliability of renewable energy sources. Disinformation about the Texas blackouts in February this year, alongside similar stories about snow-covered German solar panels or frozen Swedish wind turbines, were among those most widely shared in our dataset during the period of extreme cold. The explicit message: only a national coal industry can prevent such things from happening in Poland.

A German plot against Poland

There is also a more conspiratorial angle in the sovereignty/energy security approach to decarbonisation. Lurking among legitimate, mainstream criticism of German energy policy, popular posts by far-right actors present decarbonisation as a German plot, working via the EU to destroy the Polish economy. The ECJ ordering the immediate suspension of mining in Turów was met with exactly this reaction from far-right actors. Accounts affiliated with the far right Konfederacja party and other right-wing politicians, as well as anonymous ‘patriotic’ accounts, attacked the ECJ decision as colonialism and part of a conspiracy to make Poland dependent on Russian gas via Nord Stream 2. 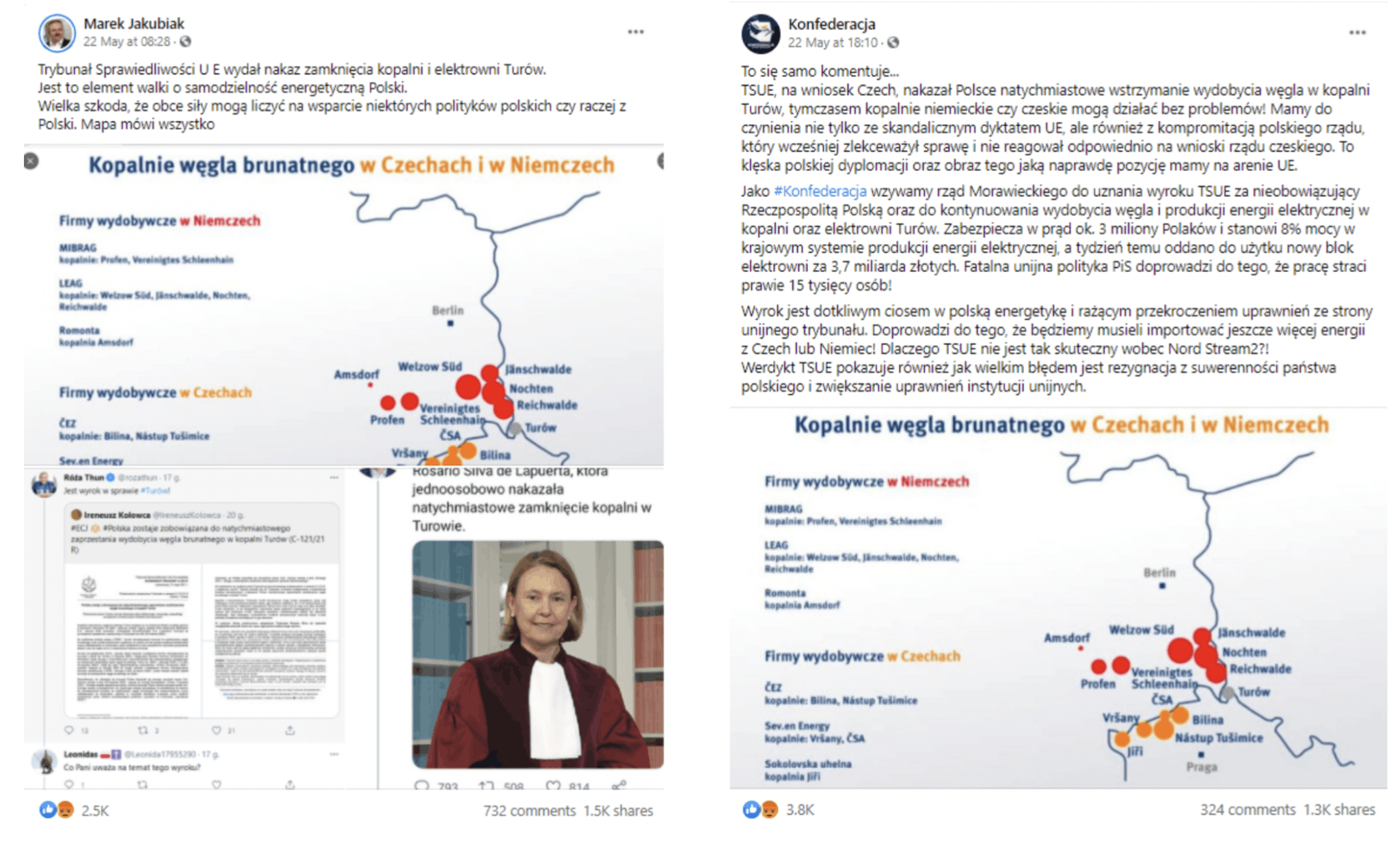 (L) Translation: “[The] Court of Justice [of the] EU gave the order [to] close the Turów mine and powerplant. This is an element of [the] battle for Poland’s energy independence. Great pity that foreign powers can count on support [by] some Polish politicians or rather [politicians] from Poland. The map says everything.”
(R) Translation: “ECJ, upon a Czech request, ordered the immediate stop of coal extraction in the Turów mine, while German and Czech mines can operate without problems! We have to do not only with a scandalous dictate [by the] EU, but also a discredit of the Polish government, which ignored the case earlier and did not react appropriately to the Czech government’s motion. This [is] a defeat of Polish diplomacy and a picture of what position we really have in the EU arena.
As #Konfederacja we call on the Morawiecki government to recognise the ECJ ruling as not binding the Republic of Poland and to continue the extraction of coal and production of electric power in the Turów mine and power plant. [It] secures electricity for about 3 million Poles and constitutes 8% of power in the national electricity production system, and a week ago a new block of the plant for 3.7 billion Złoty was brought online. [The] disastrous [European] Union policy of PiS will lead to the loss of employment by almost 15 thousand people!
[The] verdict is a serious blow for [the] Polish energy [sector] and a glaring overstepping of competences on behalf of the [European] Union tribunal. It will lead to us having to import even more electricity from Czechia or Germany.  Why is the ECJ not as effective against NordStream 2? The ECJ verdict shows also what a huge mistake resigning sovereignty by the Polish state and the increase of powers of the [European] Union institutions were.”

To reinforce the impression of a conspiracy, it highlighted that nearby German and Czech mines are allowed to operate. This falsely blurs the issue between the concrete court case and overall EU climate policy. The ‘nefarious plot’ narrative is further emphasised by pointing to recent accidents at Poland’s largest power plant in Bełchatów. First, a technical malfunction in a nearby distribution centre caused an emergency shutdown, followed by the fire of a conveyor belt supplying coal from the nearby lignite mine.  Combined with the recent decision of the Biden administration to waive sanctions on Nord Stream 2, conspiracy theorists found a suspicious series of ‘coincidences’.

Crucially, this line has not only been employed by the far-right, but appeared in widely shared posts by prominent figures of the ruling Law and Justice party (PiS). While official attacks focussed on the ECJ and even personally on the judge presiding over the case, government ministers and parliamentarians also portrayed the decision as a deliberate attack on Poland’s energy security. Even the Polish Prime Minister commented that Czech and German lignite mines just across the border are being left alone. Other officials raised concerns that other Polish mines or coal power plants could be arbitrarily closed by the EU in a similar fashion. This once again conflates the limited case of Turów with wider EU climate policies. Double standards were also emphasised by Polish officials, highlighting the EU’s failure to stop Germany forging ahead with the Nord Stream 2 pipeline.

On paper, the case of the Turów mine is not explicitly related to EU climate policies or the reduction of CO2 emissions per se. However, phasing out coal is at the heart of the transformation needed within the Polish energy sector and as such the eruption on Polish social media highlights broader tropes around ‘climate delayism’. More importantly, the episode demonstrates how quickly and easily these tropes seep into the political mainstream. With unresolved historical baggage and contemporary wedge issues like Nord Stream 2, suspicions towards Germany can be easily mobilised.

With a view to upcoming EU decisions on climate policy and the international climate conference COP26, the traction such narratives are gaining on social media poses a distinct challenge. Delayists are adept at exploiting any decision which could be portrayed negatively or hypocritically to attack international agreements and defend the coal sector. There is a continual fine line between legitimate criticism and political disagreement on the one hand, and the weaponising of Eurosceptic beliefs or suspicions about Germany to drive polarisation and delay climate action in Poland.

Lukasz Janulewicz is an Analyst in ISD’s Digital Research Unit.