For the past six months, ISD analysts have monitored online discussion about climate change across the Visegrad 4 (Czechia, Hungary, Poland, Slovakia).

In Czechia and Slovakia, analysis shows that anti-climate debate is dominated by attempts to smear those lobbying for action, be it international personalities like Greta Thunberg or local activists, rather than a discussion on climate policy itself.

The Climate Debate in Czechia and Slovakia

Climate change scepticism has been a matter of political debate in Czechia since the tenure of former Prime Minister and President Václav Klaus, who brought climate sceptic narratives into the public arena in the 1990s. Slovakia, however, has only recently seen such debates enter political discourse. This occurred in 2019 when Zuzana Čaputová – who was known for her opposition to creating a toxic landfill in the town of Pezinok – was elected to President. That same year, thousands of Czech and Slovakian students joined Fridays For Future strikes, inspired by Swedish activist Greta Thunberg.

High-profile figures like Thunberg have become targets for populists, extremists, disinformation and conspiracy outlets alike, and their emergence has triggered a reactionary wave of hateful campaigns and personal attacks. Generally, the tactics adopted are to highlight negative stories, spread half-truths or false information, twist verifiable facts and exaggerate traits of the targeted person. ISD’s research in these two countries has shown that this sort of ‘character assassination’ is the most prominent technique used to derail discourse on combatting climate change, as opposed to outright climate denial or even scepticism.

Climate-related posts on social media were collected through two methods: selecting climate-related keywords in all local languages and identifying key actors spreading anti-climate narratives. Analysts collected three datasets of social media posts from different subgroups related to anti-climate discourse between January 2019 and February 2021; January 2019 and April 2021; and October 2020 and March 2021. These subgroups were:

Each dataset contained a significant volume of posts aimed to demonise or generate anger towards Greta Thunberg. Of the top 50 anti-climate posts with the highest levels of engagement (e.g. likes, shares, comments) in the Slovak dataset, 20% contained attacks toward Thunberg (Fig.1). In the Czech media dataset, anti-Thunberg messages comprised 27% of all “climate negative” posts, followed by 18% discrediting other climate activists or groups such as Fridays For Future (Fig. 2). 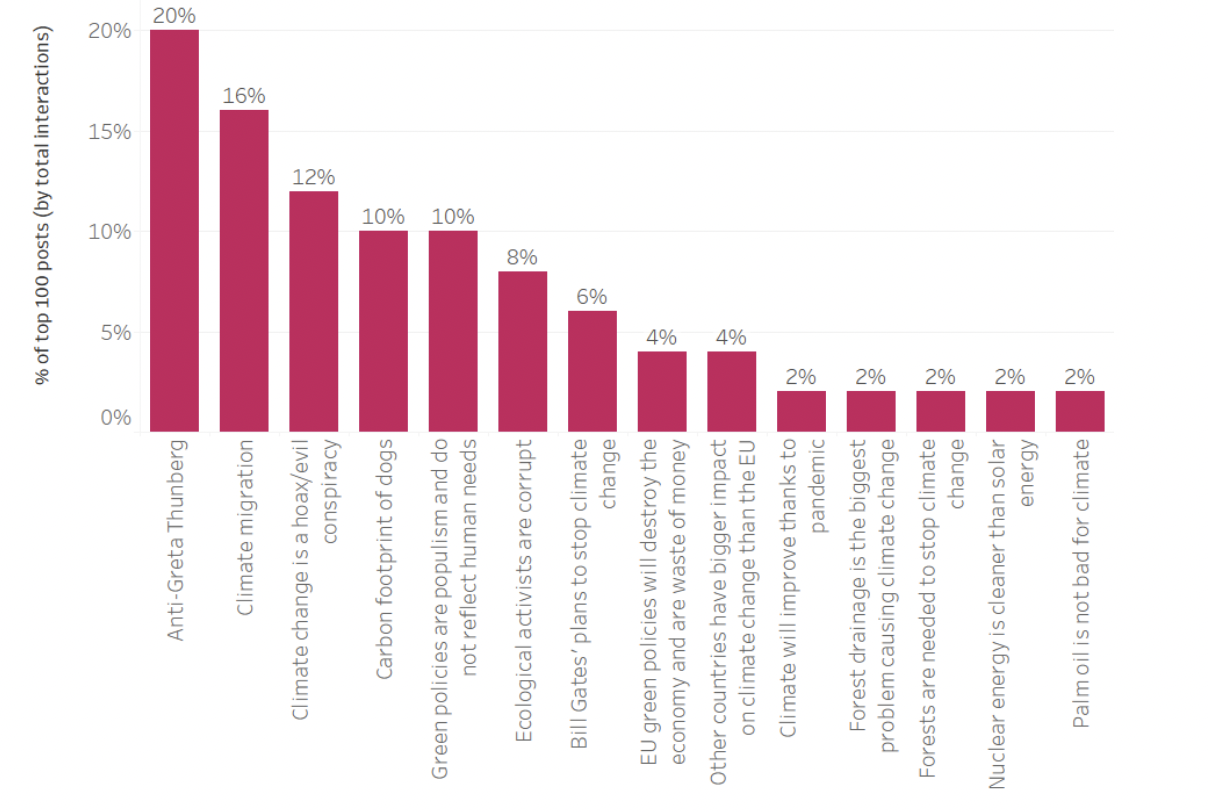 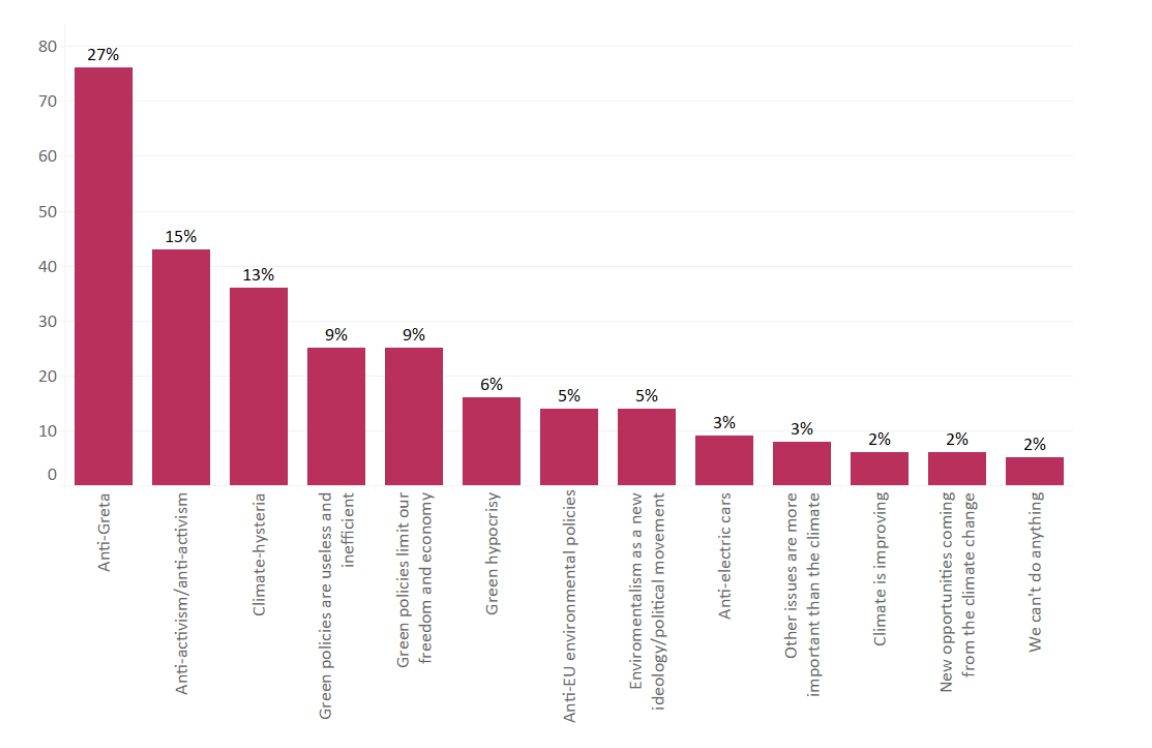 Messages denigrated Thunberg in a variety of ways*, such as through:

➜ Emphasising Thunberg’s age, e.g. by calling her a child and suggesting she is not mature or educated enough to understand issues.

➜ Exaggerating Thunberg’s Asperger diagnosis, using it to frame all of her statements and actions.

➜ Using insulting adjectives against her, such as fanatical, sluníčkář, (derogatory term for liberals) or naive.

➜ Suggesting Thunberg is mentally ill,  racist, or that Fridays for Future is a radical movement.

➜ Promoting conspiracy theories against her, such as the claim that Thunberg is acting under the instruction of some unnamed, shadowy interests.

Analysts found that Thunberg is associated with any climate-related initiative, including policy proposals at the multilateral and domestic level, resulting in the continual use of her image when attacking climate policies. This is illustrated through a December 2020 post from Czech right-wing politician Tomio Okamura, in which he criticises the EU for destroying the economy and accompanies the text with an image of Thunberg.

Such character assassination is also targeted at domestic climate activists. A case study that best exemplifies this is an outlet called “Greenpiss”, since renamed “Hnutí Ducha” (“Spirit Movement”). The outlet has targeted local organisations like the Czech branch of Greenpeace and the Czech environmental group Hnutí Dúha (Rainbow Movement), even deriving its own name(s) from them.

“Greenpiss” first became active in the autumn of 2016 when they launched a YouTube channel and website, on which they ran a petition demanding the “end of ecoterrorism” and began posting articles ridiculing green activists and policies. The website’s content was amplified by a “Greenpiss” Facebook page, established in February 2017, and a Twitter account established in May 2019. Facebook has since become the primary channel for their online activities, which centre around trying to discredit pro-climate policy actors and sharing climate-related news articles and framing them in a negative or misleading way.

One of the initial aims of “Greenpiss” was to discredit climate activists, particularly Greenpeace and their active opposition to the Chvaletice coal power station. Chvaletice is owned by Czech entrepeneur and billionaire Pavel Tykač’s Sev.en Energy group, and generated local controversy in 2019 after it was exempted from some emissions limits. The Greenpiss.cz domain was registered by IDMZ, a PR company (since rebranded as Olmer AD) who have previously worked for the Sev.en Energy group. IDMZ used to run another pro-coal website called limity.cz (as with Hnutí Dúha, this is likely a deliberate echo of the name of Czech climate activist group ‘Limity jsme my’). Public reports have identified former journalist Radek Kovanda as the editor of both the “Greenpiss” and Sev.en Energy Facebook pages, which may suggest a close relationship between “Greenpiss” and Sev.en Energy. 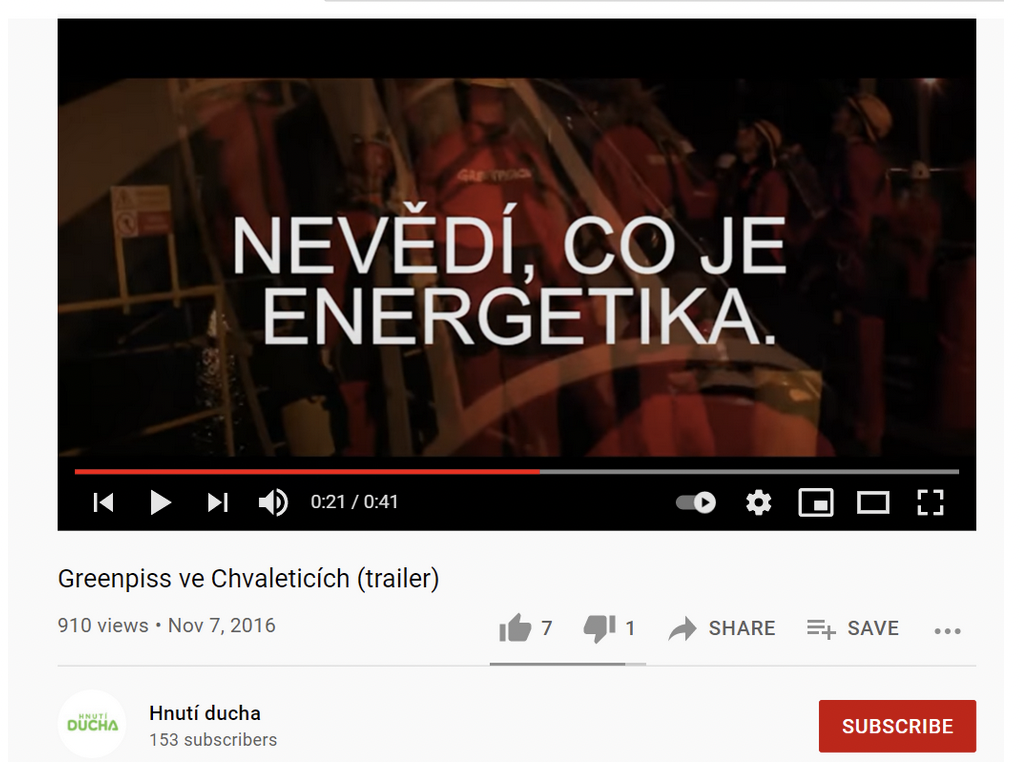 Screenshot of a Youtube video posted by “Hnutí Ducha”, which aims to discredit the Greenpeace protest on Chvaletice power station by claiming that the organisation knows nothing about energy.

Success on Social Media: Do Attacks Break Through?

The effectiveness of character assassination is demonstrated by the high volume of interactions such posts garner on social media. Although climate-positive messages have a higher volume in both countries, anti-climate posts, and especially ad-hominem attacks on individuals or groups, receive markedly more engagement.

In our dataset of Czech media outlets, anti-climate narratives were shared an average of 27 times per post, versus a mere 7 times for their climate-positive counterparts. Within the Slovak debate, two of the top ten posts with most interactions contained personal attacks on Greta Thunberg. These posts achieved more than 6,000 interactions each and ranked among the top 10 climate-related posts overall for traction.

At present, it seems that character assassination is the most successful strategy used by those seeking to disrupt and polarise online debate on climate change in Czechia and Slovakia. Climate change denial or scepticism are increasingly difficult positions to lobby for in public, but identity politics seem to find a continual audience online. In this way, while actors opposing climate action may put out lower volumes of content, they gain the most traction across social media.

* Providing direct links to hateful and conspiracy theorist channels and content brings with it several ethical risks. This includes the danger of providing oxygen to dangerous narratives and content, directing individuals to hateful and conspiratorial content and also in publicly identifying individuals involved in these communities. In reflection of these risks we have not provided direct links to the content and channels analysed in this article. However we can supply a list of references to the content analysed on request.