On 9 November 2020, Donald Trump retweeted a post by a journalist from the One America News Network about Dominion Voting Systems (Dominion), the maker of software that local governments across the US have used to help run the elections. The tweet baselessly claimed that Dominion had partnered with the Clinton Global Initiative to deliberately switch ballots intended for Trump to Joe Biden. It was the peak of an emerging narrative that combined concerns about technology and corruption with the need to explain Trump’s increasingly apparent election defeat.

Prior to 6 November 2020, ISD had identified only a small number of posts on Twitter, Reddit, 4Chan and a range of other blogs that linked Dominion to potential election fraud conspiracies. These posts came from a combination of Democratic party supporters concerned about the company’s links to the Republican party, and Trump supporters suggesting that Dominion was tied to George Soros and the Clintons. An article on Medium was shared by some Democratic party supporters, highlighting their concern at the complex financial relationship between Dominion’s primary owners and funders and the Republican Party. Pro-Trump supporters showed slightly more concern, but none of the posts went viral or pushed the conversation into the mainstream. 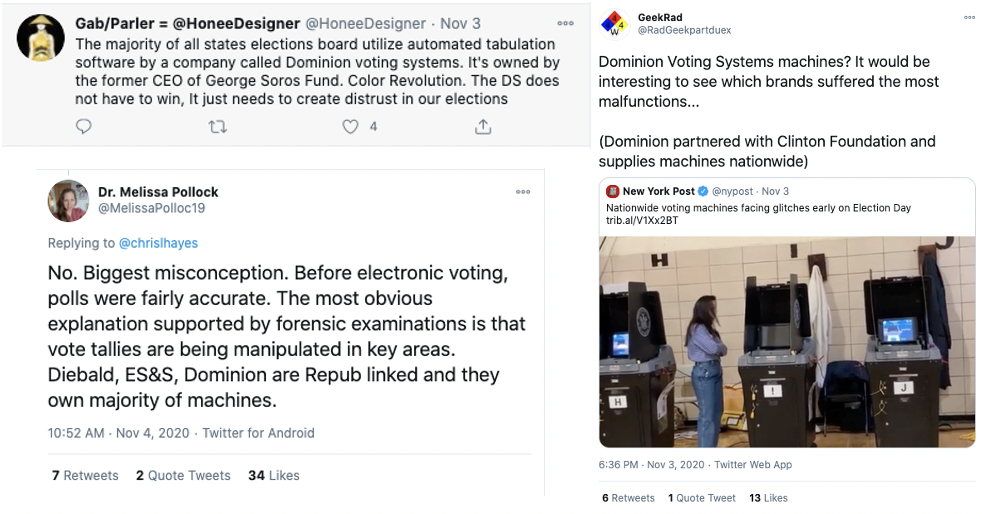 However, between 3 to 5 November, ISD identified 201 mentions of Dominion in connection with “George Soros”, “the Clintons” or “voter fraud”. Most of these were driven by engagement with one Twitter thread posted by user @WPatriot2 that discussed Dominion and its relationship with former US President Barack Obama.

By 6 November, ISD identified 239 mentions of the same keywords. The catalyst for this increase appears to be a Disqus comment left on the Breitbart live election feed. The user posted a link to a since deleted article on the conspiracy site newspunch.com. The highest reaching and most engaged-with post on 6 November was from a Twitter user replying to Raheem Kassam, editor of The National Pulse, echoing a sentiment apparently expressed by Steve Bannon (likely on his live stream video) that George Soros was connected to Dominion. 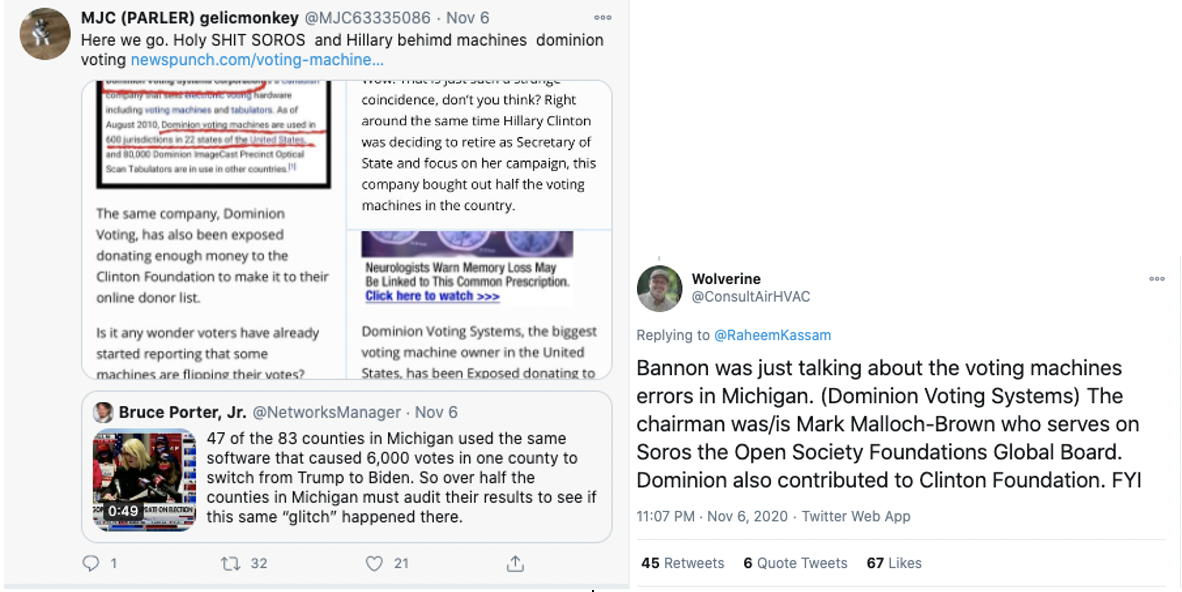 Later that day, during a press conference, the chair of the Michigan Republican Party appeared to imply that a counting error in Antrim County, Michigan, was due to a “glitch” that could be present in all Dominion machines. She later explained that she did not mean to imply the glitch was present in any other machine or county. However, the White House press secretary Kayleigh McEnany had by then tweeted an article from The Federalist that suggested 47 counties in Michigan may have suffered from the same glitch. This appeared to be a catalyst for driving the theory to spread more widely online.

On 6 and 7 November, 4Chan message boards began circulating the notion that the Dominion machines had been manipulated by Democrats in order to favour Joe Biden, and that the Clintons and George Soros were involved. The comments were present on numerous threads, with one comment specifically asking 4Chan users to make sure the Dominion theory began trending on social media. From modest beginnings, the narrative was now beginning to gather momentum. 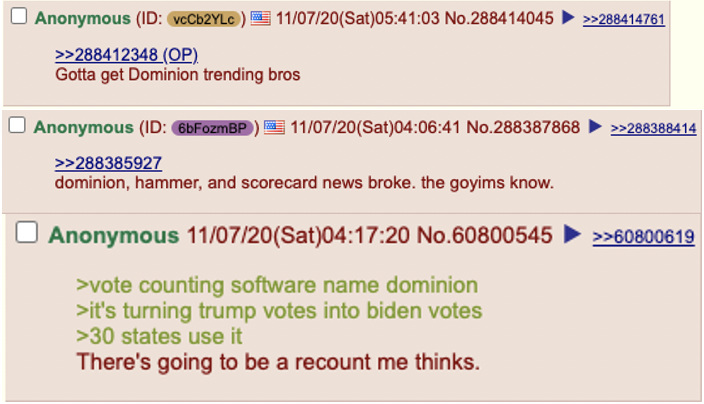 Two things clearly emerge from the initial stages of the Dominion case: (1) how a simple mistake (here from an Antrim County official) can be weaponised by those seeking to profit from it; and (2) the ability of just a few key social media accounts to create the conditions for previously fringe narratives to enter the mainstream. In Part II of this analysis, we’ll look at how this narrative went viral and ended up being amplified by President Trump.