The 6 January riots at the US Capitol in 2021 led to changes in the online sphere. Donald Trump was banned from major platforms such as Facebook, YouTube and Twitter. Many Trump supporters were also banned or suspended from platforms for sharing malign content, and Parler, a Twitter clone popular among Trump supporters, went offline.

In July 2021, a new online platform was launched: the microblogging app Gettr. Founded by former Trump aide Jason Miller, Gettr hoped to appeal to Trump supporters, promising to be a “non-bias” [sic] platform that would not remove content censored by other online platforms.

Gettr’s lenient approach to content moderation sparked fears that it could become an international hub for extremists. French and German media warned that the app could become the next big platform for far-right movements, and research from ISD showed that French identitarian influencers were encouraging their followers to join Gettr.

However, this hype might be misleading. In this Dispatch, we analyse French and German activity on the platform, compare follower metrics between Getrr and Telegram, analyse links to Gettr from Telegram channels, as well as Gettr’s inflated follower metrics, to show why Gettr’s popularity may have been overstated.

Following criticism from podcast host Joe Rogan in early 2022, who mocked how Gettr aggregated his Twitter and Gettr followers to inflate follower numbers, Gettr changed this metric. It now shows disaggregated data for the number of “Gettr Followers” and “Total followers” a user has.

However, even this data is inconsistent. Not every account is connected to a Twitter account, many accounts cannot use this feature, and the Twitter follower statistics displayed on Gettr do not always align with those on Twitter itself, a discrepancy for which Gettr does not provide a clear explanation.

Historical data of Reitschuster’s Twitter followers shows that he had 91.7k followers when he joined Gettr in July 2021, suggesting that Gettr is scraping Twitter data for selected accounts when they join, to inflate the potential audience, and not updating them thereafter. 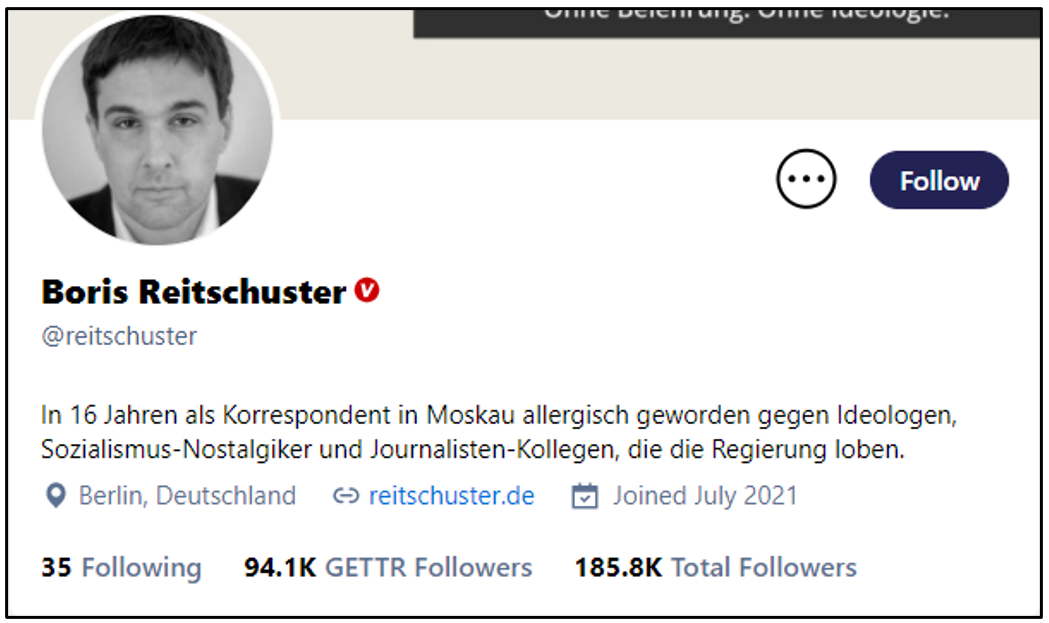 A similar example can be observed on the profile of Florian Philippot, a sovereigntist politician in France. On 10 January, Philippot’s Gettr account displayed a total follower count of 243.4k.

But Gettr does not transfer Twitter follower metrics for all users – or even all public figures. When the far-right French politician Eric Zemmour joined Gettr in July 2021, his profile did not display a follower count that incorporated his Twitter followers. The account of his campaign communications director (Samuel Lafont) did however, which can be observed through the fact that his Gettr profile now displays both his “Total followers” and “Gettr followers”.

This demonstrates the opacity around how users are selected when it comes to transferring their data from Twitter to Gettr.

In addition to Gettr’s misleading follower metrics, there are big differences in the number of followers prominent right-wing and far-right public figures and organisations have on Gettr and on Twitter. Users’ follower counts on Twitter dwarf those on Gettr, often by a factor of 10 or more, suggesting that Gettr is failing to attract large audiences.

This gap is apparent among several German accounts (Table 1). This includes the official account of the far-right party Alternative für Deutschland (AfD), which has 125k followers on Twitter and only 12k on Gettr, and the AfD politician Beatrix von Storch, who has almost 70k followers on Twitter and 3.1k on Gettr. There is a similar gap between the Twitter and Gettr follower counts of prominent French public figures and organisations (Table 2).

The Gettr accounts of prominent right-wing populists are inactive

Although Gettr tries to attract new users by bringing in personalities from the far-right and conservative spectrum, several of these accounts are inactive. This is visible on the account of Alice Weidel, the co-leader of AfD during the 2021 federal elections in Germany.  According to the platform, Weidel joined Gettr in December 2021. Her feed contains posts which are identical to those on her official Twitter account – including those posted before her Gettr account was even created. This creates the impression that the account is very active, when in fact most (if not all) of the content is imported directly from Twitter. 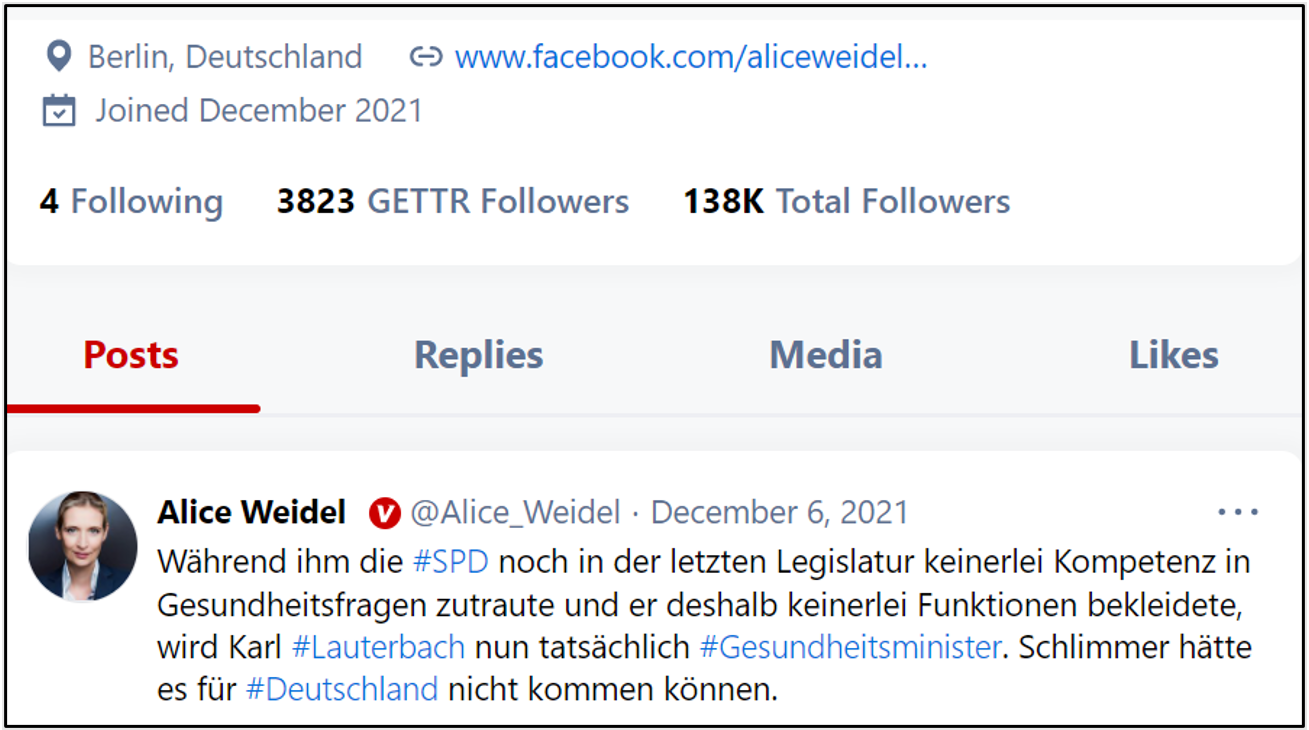 In France, several far-right MEPs such as Thierry Mariani and Louis Aliot, and conservative figures such as André Bercoff and Elizabeth Levy, do not appear to have ever actually used their Gettr accounts.

Thierry Mariani, for example, hasn’t posted anything since he was welcomed to the platform by Gettr’s official account on 13 October 2021. The only Gettr posts on his profile appear to be old tweets imported during his account creation. 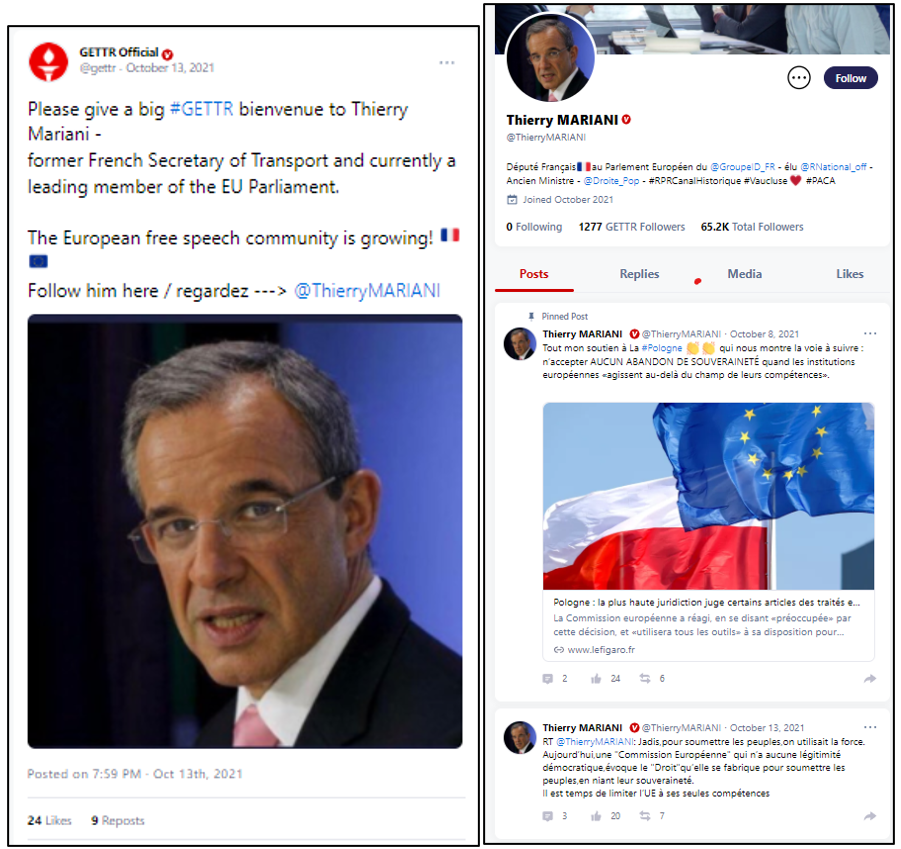 Linking from Telegram to Gettr

To test whether there has been a significant migration of users towards Gettr from other platforms, ISD researchers collected all messages from German-speaking far-right and conspiracist actors on Telegram between 1 July 2021 -21 February 2022. Researchers collected a total of 981,403 messages from 223 Telegram channels.  In short, the results indicate that Gettr is mostly discussed on Telegram only when a popular individual has an account on Gettr and is actively promoting it.

0.2% of the messages contained a link to Gettr, and 41% of the channels had shared at least one of these links. However, there were significant differences in linking behaviour. The four most shared Gettr links account for nearly 53% of all links, which is caused by forwarding messages including those links. These four links belong to actors who maintain vastly more popular Telegram channels, but promote their Gettr profiles in their posts. It appears that the activity around Gettr is driven by just a handful of individuals, who have an account there, yet their main audience is still on Telegram.

There was a significant increase in the volume of messages containing links to Gettr being shared between 11 – 13 February. This appears to have been driven by two specific links.

One was the main profile of an alternative health channel discussing subjects such as thought control, melatonin, 5G, and detoxing with volcanic rocks. One of their posts on Telegram was widely shared among observed channels. The second link was the Gettr profile of a Swiss far-right extremist who was covering various protests across German-speaking countries. The user had added the link to his Gettr profile as a ‘signature’ to each of his posts. The posts were shared by several of the channels analysed, meaning the link to his Gettr profile was also shared widely.

This suggests that discussion of Gettr on Telegram relies on the popularity of individuals who happen to have a profile on Gettr, and actively promote it.

In France, we followed a similar process. We collected all messages from French-speaking far-right and conspiracist actors on Telegram between 1 November 2021 – 14 February 2022. Researchers collected a total of 141,548 messages from 112 Telegram channels.

278 of all messages (0.19%) contained a Gettr link. While some far-right and conspiracy influencers in France are very active on Gettr, they rarely shared links to Gettr on Telegram. This included such as Damien Rieu, Thais d’Escufon, Silvano Trotta and Daniel Conversano, who shared 1, 2, 1 and 3 links respectively.

While we observed a slight increase in the number of Gettr links being shared at the beginning of February, the overall volume remained very low, suggesting that Gettr is not a central communication tool for many French conspiracy and far-right communities.

It seems unlikely that Gettr will become the next central hub for German or French extremists. Looking at account follower metrics alone, it is clear that right wing and far-right actors are still provided with significantly larger audiences, and subsequently more reach, on Twitter than on Gettr.

In addition to this, Gettr only appears to be used by a handful of individuals who also maintain other channels and are therefore not dependent on Gettr to be visible online. Gettr’s inability to generate organic activity also raises questions about the longevity of the platform. Some actors appear to be using Gettr as a backup in case of suspension from Twitter: During our analysis, we observed an increase of calls to join Gettr in France after Twitter mistakenly banned accounts linked to Eric Zemmour’s campaign for a few hours. Such calls still make Gettr a relevant subject for inquiry.

Finally, Gettr has also limited its ability to present itself as a safe haven for those wanting to avoid moderation efforts through banning the far-right extremist Attila Hildmann. While Telegram has blocked several extremist channels in Germany, Hildmann still has a Telegram channel.

The platform’s future is ultimately uncertain – not least because it might have to compete with the recently launched Truth Social.

This research was conducted via Method52, a tool for the collection, processing and analysis of large-scale social media data developed and maintained by CASM Technology.