By Julia Smirnova and Cooper Gatewood.
Hannah Winter contributed to this Dispatch.

The COVID-19 pandemic has led to a rise in antisemitic narratives and hate speech against Jewish people online. In Germany, 2351 antisemitic crimes were recorded in 2020 alone, marking an increase of 16% from the previous year and the highest number of antisemitic crimes since recording began in 2001. During the 2021 German federal election campaign, at least 38 cases of antisemitic incidents were recorded by the Federal Association of Departments for Research and Information on Antisemitism (RIAS), which included election posters being smeared with antisemitic signs and slogans.

Researchers and civil society representatives, including the president of the World Jewish Congress Ronald Lauder, have cited the pandemic as a key driver of antisemitism in Germany. Previous ISD analysis has corroborated this, evidencing a thirteen-fold growth in German-language antisemitic comments between January 2020 and March 2021 on Facebook, Twitter and Telegram. This dispatch turns its attention to YouTube, examining videos which are attracting hate speech against Jewish people through antisemitic comments posted to the videos.

Perhaps our most interesting finding revolved around COVID-19-related videos. While the list of keywords we used to identify videos that may be likely to attract antisemitic comments did not contain any references to the COVID-19 pandemic, COVID-19-related videos comprised the majority of the top ten videos (7/10) containing the highest number of antisemitic comments.

Of particular note was that many of these videos did not themselves contain mentions of Jewish people or antisemitic content. Rather, they had been identified because YouTube’s API retrieves search results “associated with the keyword“.

We began by collecting all YouTube videos posted between 1 July and 27 September 2021 that were found to be associated with a list of German keywords deemed likely to attract antisemitic comments (mostly antisemitic expressions). We then collected all German-language comments posted on these videos between 1 July and 2 November 2021. The final dataset consisted of 197,933 comments posted on 2,465 videos.

We manually reviewed these potentially antisemitic comments in line with the International Holocaust Remembrance Alliance (IHRA)’s definition and examples of antisemitism, which states that antisemitism is:

“A certain perception of Jews, which may be expressed as hatred towards Jews. Rhetorical and physical manifestations of antisemitism are directed towards Jewish or non-Jewish individuals and/or their property, towards Jewish community institutions and religious facilities”.

The purpose of this was to establish the main narratives and tropes present in antisemitic content and to identify any sources of false positives. This refers to content that may have been incorrectly classified as antisemitic by the algorithm.

Upon a manual review, 72 comments were identified as false positives, which left us with 133 antisemitic comments in the dataset. Thus, 0.07% of the whole dataset and 19% of comments relevant to Jewish people or Judaism were antisemitic.

The top ten videos with the most antisemitic comments were viewed in full and manually evaluated to determine their main topic.  In our initial list of the top ten videos, comments posted to two videos were classified as false positives and the videos were subsequently removed from the list. The videos with the next highest numbers of relevant comments were analysed instead. The number of antisemitic comments for each video ranged between four and fifteen. 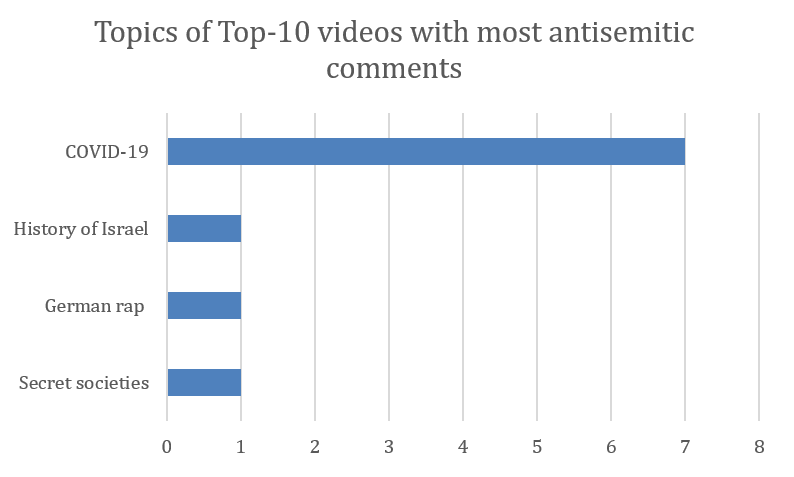 The most popular video, which was also the video with the highest number of antisemitic comments, had more than 990,000 views and a total of 11,902 comments at the time analysis (10 February 2022). 15 of these comments, or 0.1%, were antisemitic. The video was uploaded by a popular German media outlet and discussed COVID-19 restrictions in Germany. While the video did not contain references to Jewish people or antisemitism, it nevertheless attracted antisemitic comments of conspiratorial nature (see examples in the screenshots below). 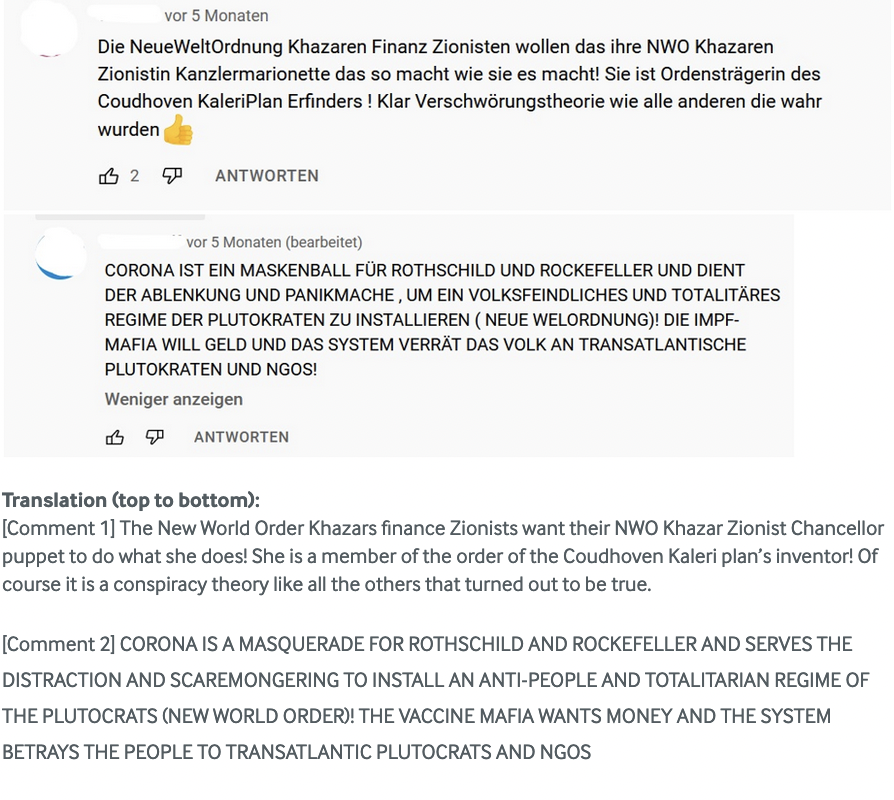 Examples of antisemitic comments which were conspiratorial in nature.

Seven (of the top ten) videos with the most antisemitic comments were about the COVID-19 pandemic. Similar to the video mentioned above, some did not contain any references to Jewish people or antisemitic expressions, yet still attracted hateful comments against Jewish people.

Amongst the videos that did contain antisemitic content, one compared the treatment of unvaccinated people in Germany to the treatment of Jewish people during the Holocaust. Such comparisons have become popular among COVID-19 sceptics in Germany, who have begun to regularly wear Yellow Star of David badges (like those the Nazis forced Jewish people to wear) with “ungeimpft” (“unvaccinated”) written on them during protests against pandemic restrictions.

Comparing the perceived stigmatisation of those not in compliance with pandemic restrictions to the stigmatisation of Jewish people during the Nazi era serves to trivialise the atrocities of the Holocaust. Dr. Felix Klein, the Federal Government Commissioner for Jewish Life in Germany and the Fight against Antisemitism, made a public statement to this effect in December, labelling it a form of hate speech.

Legally, such comparisons lie in a grey area. However, German courts have started prosecuting cases which involve the trivialisation of the Holocaust (including misuse of the Star of David) and the city of Munich has banned the use of Stars of David during protests against COVID-19 related restrictions altogether. 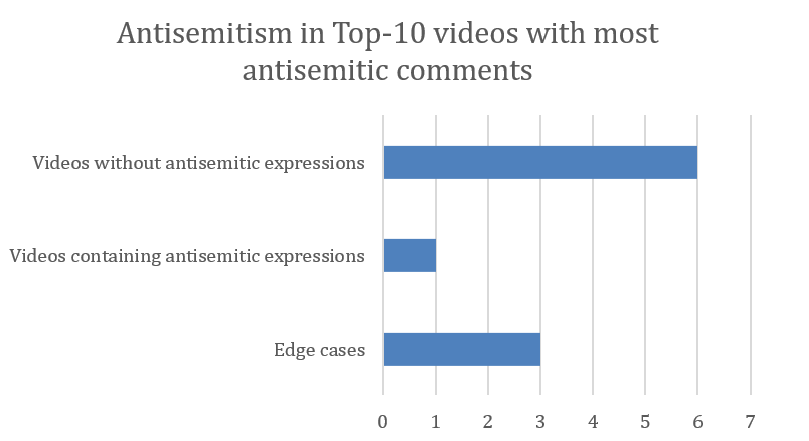 Two other videos about COVID-19 pandemic contained references to conspiracy theories. One of the videos mentioned the “Great Reset” conspiracy narrative, which claims that sinister powerful groups conspired to initiate the pandemic so as to advance their plans for a global restructure. The video also alleged global influence of the Young Global Leaders program of the World Economic Forum.

Another video contained a reference to the “New World Order” conspiracy narrative, which broadly claims that global elites are secretly conspiring to replace sovereign nation states with a tyrannical “one-world” government which will rule the world with a globalist agenda. Again, although neither of these two videos explicitly mentioned Jewish people, they attracted antisemitic comments about alleged Jewish conspiracies. 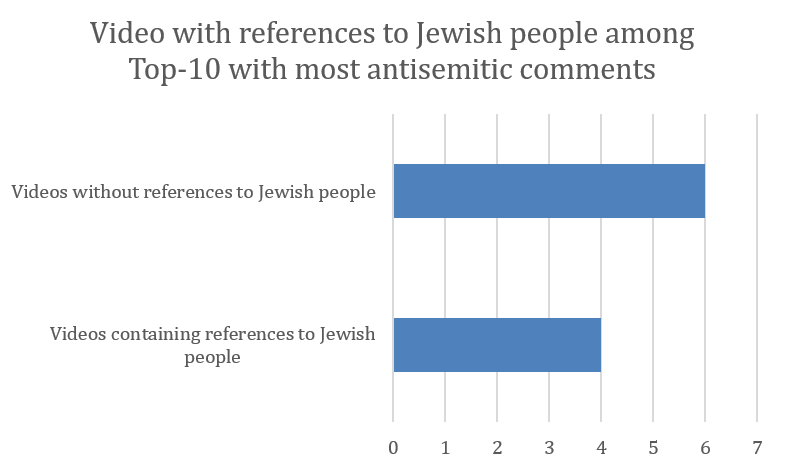 Analysts found that antisemitic content in video comments contained both ‘classic’ and novel COVID-19-related antisemitic narratives, the latter of which have been identified in previous ISD research.

Authors of the comments portrayed the COVID-19 pandemic as a global conspiracy or a “masquerade” organised by “Zionists” or Jewish persons such as the Rothschilds (an influential Jewish banking dynasty) or George Soros. In several comments, which alluded to the Great Reset conspiracy, users falsely claimed that Klaus Schwab, the Founder and Executive Chairman of the World Economic Forum, is related to the Rothschilds. Another recurring narrative claimed that a “Zionist” or “Khazar” New World Order conspiracy was behind the COVID-19 pandemic. 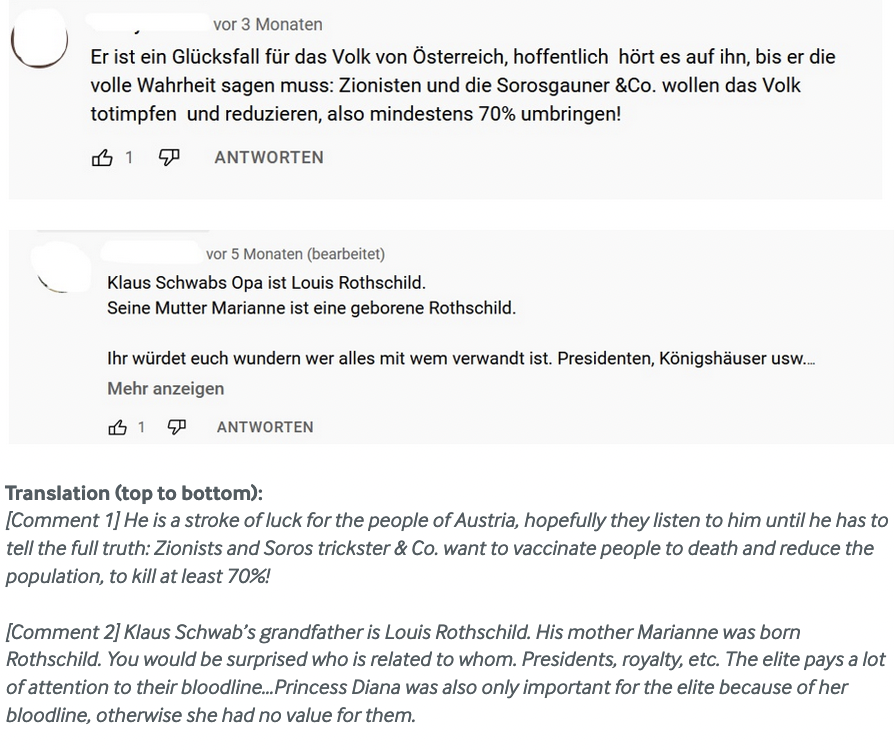 Examples of antisemitic narratives and tropes in video comments.

‘Classic’ antisemitic narratives, which claim that Jewish people “control the world” or are conspiring for world domination, frequently appeared in the dataset. Several comments made references to George Soros allegedly controlling or financing German chancellor Angela Merkel, Germany’s Green party, the German police, left-wing radicals in Germany, the media or non-governmental organisations. Other comments falsely claimed that Merkel is Jewish (Ashkenazi) or a “puppet” of a “Zionist” conspiracy. There were also claims  that Jewish people or the Rothschilds were responsible for both world wars 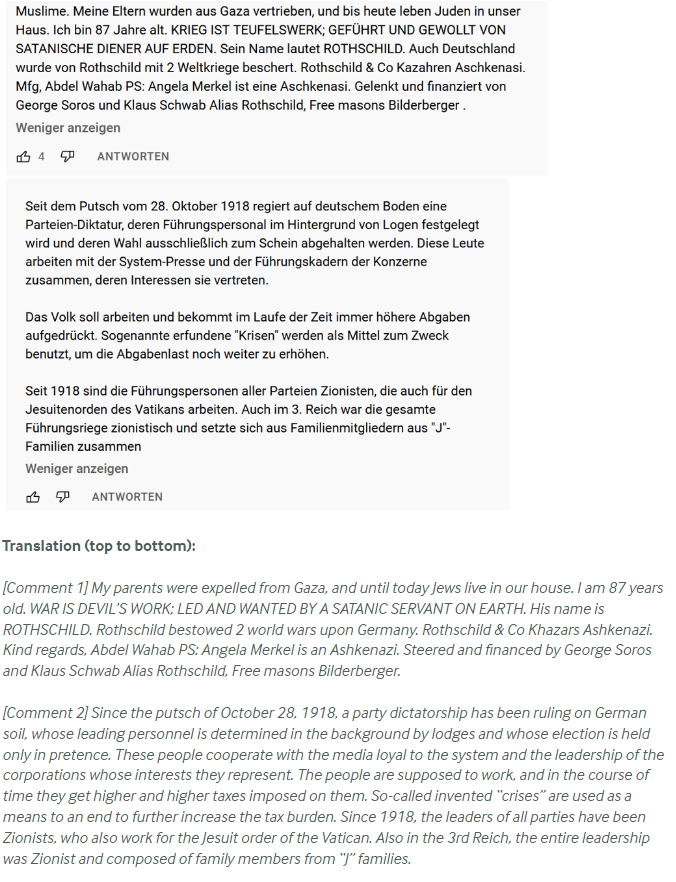 Examples of antisemitic comments that include conspiracies about Jewish people.

We also identified antisemitic content that denied or downplayed the Holocaust, either through falsely claiming that it was an American conspiracy, referring to “alleged victims of the Nazi regime” or calling the Holocaust “bird shit” (a reference to a comment by AfD politician Alexander Gauland that downplayed Nazi crimes).  The dataset also contained several examples of Israel-related antisemitism, comparing the establishment of the State of Israel to national-socialism or drawing other parallels between Israel and the Nazi regime. 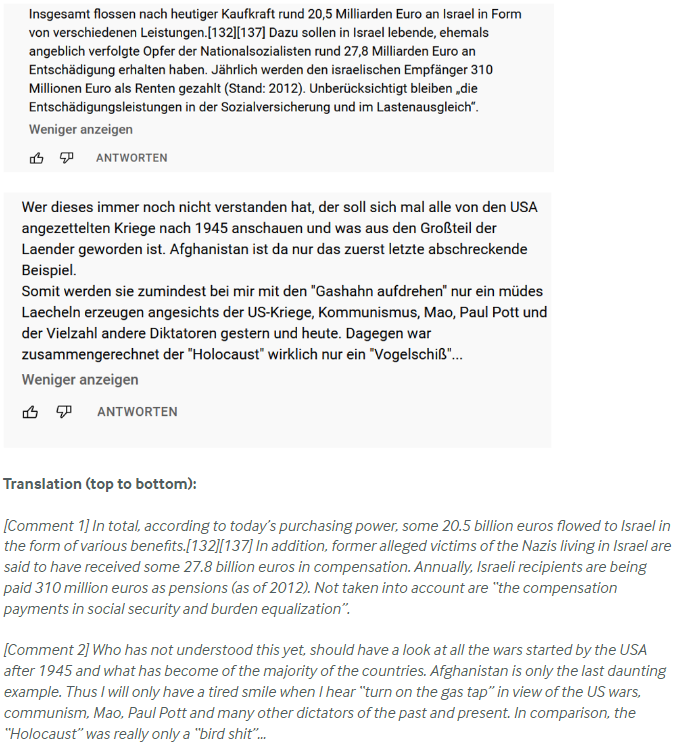 Examples of comments with Israel-related antisemitism and Holocaust denial.

While some of the comments, specifically those which constituted Holocaust denial, are illegal under German law, a significant proportion arguably lie in a legal grey zone. While these comments are potentially legal, they are nevertheless harmful – a problem, which has been identified in previous ISD research on other social media platforms.

Social media platforms should find ways to address potentially legal, but harmful content. Moderators and users should be educated to recognise various types of antisemitism and coded language, particularly in the context of the COVID-19 pandemic.

This research had two major limitations. Firstly, as the YouTube API does not allow for a mass collection of comments, it is almost impossible to define what a representative sample of German-language comments may be. Our sample of videos was collected using a list of keywords, meaning that any videos not associated with the selected keywords were not included in the dataset. However, a keyword-based approach allowed us to collect videos and comments across the platform regardless of channels. This avoided possible biases which could arise due to manual channel selections. Additionally, the YouTube API returns results that are “associated with” keywords in searches, but it is not completely transparent as to how this association is made. This lack of clarity poses a general limitation to this type of research on the platform.

The second limitation is typical for natural language processing (NLP). No NLP algorithm is 100% accurate, meaning that the final dataset would always contain a certain number of false positives. Upon manual review of the used dataset, analysts found that comments containing irony or discussing antisemitism presented a difficulty for the algorithm to classify correctly. In one particular instance, a video critical of conspiracy ideologies attracted numerous comments by users who were mocking people believing in antisemitic conspiracies. Irony and sarcasm are notoriously difficult to interpret correctly using automated approaches.

Cooper Gatewood is a Senior Digital Research Manager at ISD.