The dangers of identitarian narratives and tactics are evidenced by the recent proscription of Generation Identity, as well as the movement’s promotion of racist conspiracy theories and policies. Identitarianism’s ascendance in the political sphere is cause for concern.

The impact of the right-wing extremist identitarian ideology on French society has been a growing concern for French authorities. Founded in France in 2003 by Bloc Identitaire, Identitarianism is an ethnonationalist movement which promotes concepts such as ‘remigration’ and the ‘Great Replacement’ conspiracy theory. Members regularly conduct anti-migrant operations in Europe.

While some efforts have been made to curb identitarian activities online, identitarian ideology has continued to spread into the mainstream. The Great Replacement conspiracy first theorised by French author Renaud Camus and later absorbed into identitarianism, started out as a fringe concept but has seeped into the mainstream of French public discourse. In October 2021, a poll showed that over 60% of the French population believed the Great Replacement to be real. The far-right polemicist, journalist and now aspiring presidential candidate Eric Zemmour, has been promoting identitarian concepts for years, including the Great Replacement theory which now plays a central part in his election. Zemmour is projected to garner up to 14% of the vote.

From May to November 2021, ISD researchers analysed the mobilisation of French identitarians on three social media platforms (Twitter, Facebook, Instagram), as well as on the messaging app Telegram to understand the nature and dynamics of identitarian discourse online. The full report is available here. 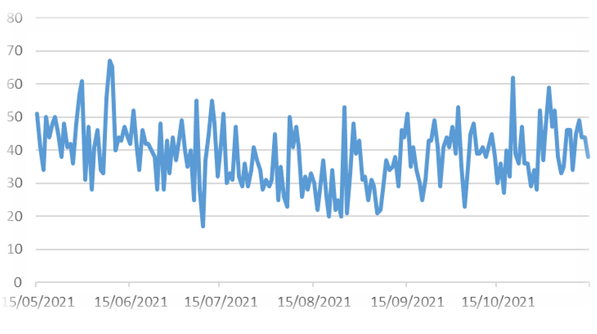 On Facebook, the main peak of discussion occurred between 6 and 12 June, with a total of 375,000 interactions. Our analysts found 6 pages to be responsible for 95% of the interactions over this time period, which demonstrates that very few key actors are responsible for spreading identitarian ideas on Facebook. 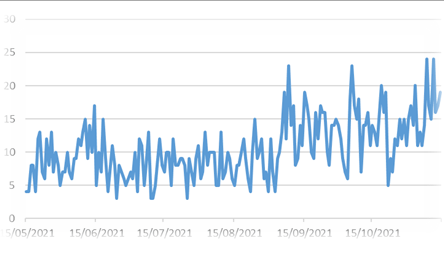 On Instagram, the volume of publications by accounts in our identitarian seed list showed a 50% increase from September 2021, an increase in volume that continued throughout October and November. Analysis of the highest performing posts in September and October shows this phenomenon is tied to the mobilisation on Instagram around the Zemmour candidacy.

Identitarians mobilise around topics overlapping with conspiracy theories and femonationalists

While opposition to immigration and multiculturalism were the most common topics of discussion for the identitarians, our analysts also identified a significant proportion of femonationalist content, showing that identitarians are co-opting feminist rhetoric to promote anti-immigration and anti-Islam ideas and broaden their appeal. 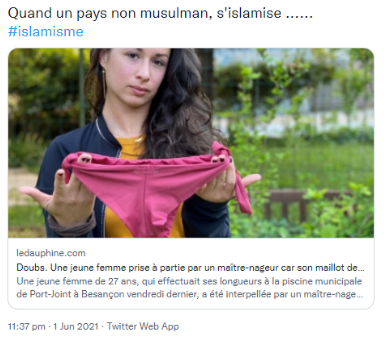 Figure 1: The tweet reads “when a non-muslim country is islamising…”. The link shared is to an article which reports a woman has been targeted in a public swimming pool because her swimming suit was too revealing. This tweet blames the supposed “Islamisation” of France.

Anti-vaccine content and anti-health restrictions represented a notable sub-set of identitarian content, highlighting the intersection between far-right identitarian mobilisation and conspiracy theories surrounding the pandemic during the election campaign.

Researchers also found that identitarian actors are using various news items to promote their anti-migrant rhetoric, including the Afghan crisis and the crisis at the Polish border.  Identitarian accounts are leveraging these events to spread fear, reinforcing the idea of a supposed refugee invasion and/or Islamisation of Europe.

In the Twitter dataset specifically, we found that peaks of discussion when looking at the use of identitarian terms were correlated to media interviews of Eric Zemmour on popular radio or TV shows. On 18 October, there was a 150% increase in the use of the term Great Replacement which was tied to the Duhamel and Zemmour debate on BFMTV. Again, on 1 and 2 November there was an increase of 170% of the hashtag #greatremplacement on Twitter after an interview of Zemmour on Cnews in which he promoted the ‘Great Replacement.’ 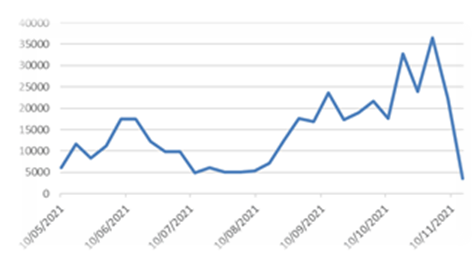 As identitarian figures have been suspended from some mainstream social media platforms, they have turned to alternative online spaces to communicate with their audiences. ISD researchers analysed the tactics used by former spokesperson of the French branch of Generation Identity, Thais d’Escufon, across various platforms.

Since the proscription of Generation Identity by the French government in March 2021, Thais d’Escufon has described herself as “a right-wing youtuber” and influencer, and has used alternative platforms like Telegram to promote identitarian ideas. In her Telegram channel, d’Escufon has outlined her strategy for using different social media platforms to advance her ideas, accusing mainstream platforms of censorship. Both Twitter and Tiktok have deactivated her accounts, and Instagram and Youtube have temporarily suspended her channels.

With her Instagram account re-instated, d’Escufon uses the platform to recruit new followers and redirect them to Telegram, using Instagram as a more ‘moderate’ window into a more extremist online space. In September 2021, the far-right influencer posted a Reel on Instagram encouraging her followers to value their “European heritage.” This Reel was then reposted in her public Telegram channel with a longer explanation referencing new-right thinker Guillaume Faye who conceptualised the idea of an imminent civilisational war. Thais d’Escufon also uses her Telegram channel to redirect her followers towards other far-right and identitarian figures, such as Austrian identitarian Martin Sellner, as well as other alternative online spaces such as Gettr or Odysee. 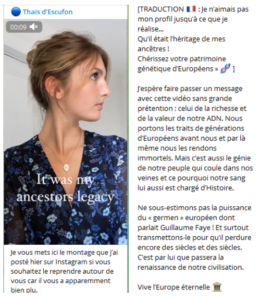 Figure 2 and 3: Screenshot of content shared in the public Telegram channel of Thais d’Escufon. In the first screenshot she explains reposting her Instagram Reel.

Identitarians are coordinating activities to boost Zemmour’s candidacy on Telegram

Several identitarian channels openly called on their followers to take action to support Zemmour by mobilising off- or online.  For instance, messages in several channels encouraged members to attend Zemmour’s first campaign rally in Villepinte (Paris) on 5 December 2021, where far-right groups and pro-Zemmour protesters ended up being involved in violent incidents. An identitarian youth group also shared an online poll held by weekly magazine Le Point about Zemmour’s credibility as a candidate, encouraging members to vote and boost Zemmour’s profile in mainstream media and polls.

This investigation has established the French identitarian movement is increasingly active on social media by occupying the space and catering for different audiences across multiple platforms. Their online mobilisation has been galvanised by the Zemmour presidential bid, as they perceive the candidate who claims France is engaged in a civilisational war as the ultimate identitarian presidential candidate, especially because of his years contributing to the mainstreaming of their ideas, first through his media presence and now by putting their stances at the top of his campaign agenda. The Zemmour campaign’s recent recruitment of Damien Rieu, a major figure in the French identitarian movement, only corroborates this trend.

The relative diversity of topics covered by this movement, their co-optation strategies and their inherent contradictions (notably on gender issues) could represent opportunities to expose their weaknesses and challenge their narratives.

As several identitarian actors have seen their social media accounts temporarily suspended or deleted, the identitarian movement in France has adapted by switching opportunistically between mainstream platforms and alternative online spaces in order to continue engaging with their community while mainstreaming their ideas. Even when lawful, these trends should be monitored carefully, and tactics highlighted in this investigation (for example, occupying the cyberspace and saturating the public debate) must be brought to light. They contribute to exaggerating the penetration of extremist ideas within French society on social media, which is then mirrored in mainstream media, and can influence the key agenda-setting momentum of the presidential election.

The question of platform migration of known banned actors and the need for tech companies to cooperate on this issue will be instrumental in the context of the implementation of the Digital Services Act, which aims to provide a more coherent regulatory framework across platforms and EU member states.