*This article has been published in English and German. For the German language version, please see below.

Following the withdrawal of NATO and Western troops from Afghanistan in mid-August, there has been a visible spike in German-language anti-migration discourse on social media platforms.

Monitoring discussion on Facebook, Instagram, Telegram and TikTok, our analysis shows that  disinformation and stories removed from context are being used to promote hate towards refugees, asylum seekers and immigrants in Germany. We also observed the re-emergence of a concerted anti-immigrant campaign by the ‘Alternative für Deutschland’ (AfD) and far-right movements in Germany. This has concerning implications for the security of refugees and immigrants already living in Germany, as well as refugees arriving from Afghanistan.

In the run-up to the federal election, Kabul evacuation flights were used by the AfD to promote themselves as the protectors of Germany, as they asked the German government to put a moratorium on asylum applications and attacked other political parties supporting the provision of aid to Afghan asylum seekers. This included the Social Democrat Party (SPD) and Bündnis90/Die Grünen parties. We observed a visible effort by those on the far-right and within the AfD to reignite immigration as an electoral issue, intending to stoke public fear and anxiety about the potential impact of policies that support refugees’ needs and rights.

Allowing political debate to be used to  demonise refugees and immigrants undermines the safety and security of Germany: the more that immigrant and refugee communities are targeted by xenophobic hate, the easier it becomes for individuals in those communities to become subject to radicalisation efforts.

The word “2015” has been used by various politicians and influencers in reference to the year 2015, when Germany had 476,649 asylum seeker registrations, following Chancellor Merkel opening German borders in response to the Syrian conflict.

This spike in activity was due to official AfD content comparing the current refugee situation to the 2015 refugee influx, with a message that the party did not want to see a “repeat of 2015”. A speech by Alice Weidel used this argument, as did another post by AfD politician Beatrix von Storch. There, she used the AfD election slogan ‘Deutschland Aber Normal’ (‘Germany but normal’) to indicate that welcoming refugees would be “un-German” or abnormal. 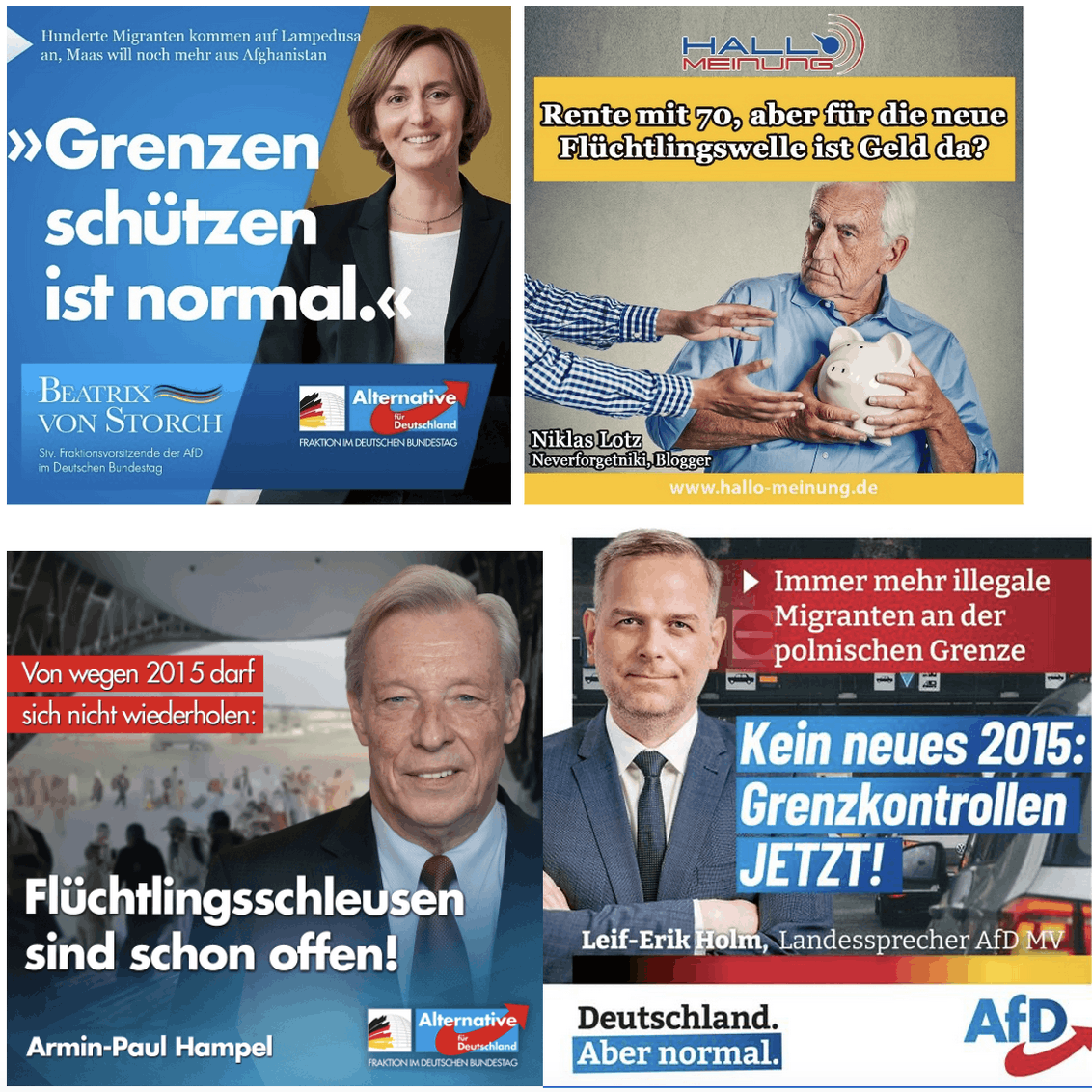 Captions in order of image read from the left to right: 1. Hundreds of migrants are arriving in Lampedusa, Maas wants even more from Afghanistan. Protecting the borders is normal. 2. Retiring with 70, but for the new refugee wave we have money? 3. So much for 2015 can not repeat itself: The refugee gates have long been open! 4. More and more illegal migrants on the polish borders. No new 2015: Border control NOW!

We analysed mentions of “Afghanistan” by Turkish, Iranian, Russian and Chinese state-backed media sources in the German language on the publicly accessible German election dashboard. We found that Russian media accounts focused on the topic between August and September. This aligns with the strategy we have observed from Russian state-backed media accounts,  producing substantial amounts of content on controversial domestic issues. For example, Russia Today in Germany (RT DE) created a special section for its Afghanistan coverage and had more than 260 publications on the topic between 15 August 2021 and 21 September 2021. In turn, between 1 August 2021 and 17 September 2021, the word “Flüchtling” (“Refugee”) appeared 37 times on the German election dashboard. 20 of these mentions came from Russian state-backed media and 17 from German media.

We found that mentions  of the word “Flüchtling” (“Refugee”) in Russian state media concerned the allegedly  imminent threat of a new wave of refugees in Europe, and the impending division that this will cause both within Germany and in the EU. This narrative was given weight by various pieces of content. For example, on 2 September 2021, a video published by RT stated that EU leaders are currently divided over how to deal with Afghan refugees. Two days later, on 4 September 2021, an article by Sputnik in German (SNA) announced that Germans are divided over the acceptance of Afghan refugees. An analysis published on RT on the 24 August 2021 and citing data from the Center for Strategic and International Studies stated that the upcoming refugee crisis caused by the situation in Afghanistan would make the 2015 refugee crisis look like a ‘piece of cake’. Ultimately, our analysis shows that Russian state-backed media was amplifying the narrative that “2015” is returning to Germany.

In a return to well-known tactics, AfD and far-right communities on Facebook and Twitter have been pushing anti-immigration narratives through the use of statistics which claim to prove that criminality amongst foreigners is higher than that of Germans. Often these statistics are taken out of context, either in terms of the date they were published or the geography or nature of crimes reported. Nonetheless, they are used to make sweeping generalisations about the likely criminality of all immigrants entering Germany.

This is especially true for sexual violence crimes. For example, a post by AfD-Fraktion NRW claimed that 46% of gang rapists do not possess German citizenship. This is not untrue, but uses the statistics provided by the Ministry of the Interior of the State of North Rhine-Westphalia, (which found that 53.9% of group rape suspects are German) in a way intended to stoke division.

The search word ‘Afghanistan’ had 22 million mentions on Twitter and 43,000 posts on Facebook. On Facebook, the top content creators on the topic were Alice Weidel, AfD’s main account and ‘AfD in EU-Parlament’. The post which received the most engagement from online users was by Alice Weidel (26,900 interactions). It claimed that crime will be directly imported to Germany by rescuing Afghans. Another post that gained attention online (with over 15,000 interactions) was by “AfD in the EU-Parlament”. It claimed that Afghan people want to implement Sharia law within Germany, positioning them as opponents to the existing rule of law.

Linked to the narrative of alleged migrant ‘crime’, far-right communities online portray Afghan asylum seekers as threats to German women and children. We found a total of 1,214 posts on Twitter and 48,001 posts on Facebook between the 22 August and 20 September 2021 when searching for ‘Afghanistan, Frauen und Kinder’ (“Afghanistan, women and children”).

An AfD election poster stated that ‘Kinderschänder’ (“child molesters”) are being flown into Germany by the current government, implying that crimes against children are perpetrated by Afghan people. The post received 11.5K interactions on Facebook. However, statistics from the BKA (the Federal Criminal Police Office) reveal that 5.4% of all offences related to child pornography in 2020 were committed by non-German suspects.

Captions in order of image read from the left to right: 1. AfD-Enquiry shows: Every second Afghan receives social benefits and every 10th Afghan is a criminal 2. Every 2nd day on Gangrape happens! 46% of suspects do not have German citizenship 3. Instead of women and children the German Armed Forces fly in deported ciminals and dangerous peops from Afghanistan through an evacuation flight back to Germany. Our Government could not fail harder! 4. No to the import of criminality!

Posts such as these take statistics out of complex contexts on domestic crime and sexual violence, and misleadingly presenting them as immigration problems. To display a sexual violence statistic in such a light has a distortion effect, seeking to create prejudice and a sense of fear towards one group.

The Afghanistan crisis is being exploited by the far-right and political parties in Germany to promote anti-immigration agendas. The combination of the AfD’s campaign to instil fear that 2015 could ‘return’, and Russian state-backed media sources continuing to exploit controversial and divisive issues like immigration, shows the concerted effort being made by domestic and foreign actors to spread fear and prejudice in Germany immediately before the election, and continuing in its aftermath.

There is a need for actors across sectors to stand up against this kind of hate, racism and xenophobia. Politicians and civil society must provide a strong counter-narrative to the divisive and hateful narratives of the far right, speaking up for those facing inhumane conditions and peril in Afghanistan.

Technology platforms like Facebook and Twitter must better enforce their policies on hate speech in order to protect against racist mobilisation, including taking action when the source of such hatred and disinformation is someone in a position of power, such as a politician. It is imperative that companies stop profiting from hate speech and transparently and accurately enforce their terms of service.

To analyse if and how Russian state-backed media were involved in promoting these narratives in the German media ecosystem, ISD used its joint German election dashboard, built with the Alliance for Securing Democracy at the German Marshall Fund, to analyse the messaging about Afghanistan in German language media from Russia, China, Iran and Turkey since the fall of Kabul mid-August. All statistics are correct as of 20th September 2021.