The trucker convoys taking place across multiple provinces of Canada have received substantial support from a wide variety of primarily right-wing actors. In this dispatch we examine the international sources of funding and support for the movement, as well as exploring other potential convoys in North America and Europe.

➜ The trucker convoys taking place across multiple provinces of Canada have received support from right-wing politicians, organizing groups and content creators in the US. These include former President Trump, Ben Shapiro, Marjorie Taylor Greene, and Dan Bongino.

➜ There has been widespread discussion of the convoys on Facebook – with over 97k posts from Jan 22-Feb 5 – and videos using the hashtag #FreedomConvoy2020 have generated over 258 million views. This content includes violent threats and conspiracy theories targeting Canadian PM Justin Trudeau.

➜ Funding appears to be coming from a host of US and international sources. The associated GoFundMe campaign, which has since been removed, was promoted across numerous US-based Facebook groups focused on anti-vaccine and anti-COVID-19 restrictions content. A new fundraising effort was set up on GiveSendGo after the removal of the GoFundMe campaign has raised over $8.7million.

➜ The convoys have been discussed and promoted by extreme right-wing communities across Telegram and 4chan as channels attempt to organize similar efforts in over 30 countries, including the US.

➜ US communities are discussing and preparing for a convoy to travel from California to Washington, DC on 1 March, to coincide with Biden’s State of the Union address. Facebook groups being used to organize and galvanize support for this (including with 200,000 members) are being removed but systemically reappearing.

The convoy has received much support from right-wing politicians, organizing groups, and content creators in the US. This support is likely to have played a crucial role in taking this from a domestic issue to an event that achieved worldwide interest and coverage.

Most notably, former President Trump mentioned the convoy in an email to supporters and endorsed the convoy during a recent rally, referring to Prime Minister Trudeau as a “far-left lunatic” in the process. The Trump sons also joined in with Donald Trump Jr. by praising the convoy on Facebook, meanwhile Eric Trump claimed that the media were deliberately not covering the convoy and described the media as the “enemy of the people.” Current and former GOP officials with large online followings, such as Mike Huckabee and Rep. Marjorie Taylor Greene, have also expressed their support for the convoy. Crucially, the convoy has also enjoyed widespread coverage and promotion from partisan, right-wing content creators in the US, including Ben Shapiro, Dan Bongino, Glenn Beck and Franklin Graham.

The convoy and similar efforts have been widely discussed on Facebook globally over the past two weeks. Between 22 January – 5 February, there were 97,012 posts (photos, links, statuses and videos) from Pages and Public Groups worldwide that mentioned the convoy, generating 24,094,123 total interactions (reactions, comments and shares).[1] Facebook pages with administrators based in the US published 7,340 posts mentioning the convoy in the same time period, together these posts generated 9,942,955 interactions.[2]

Likewise, content about the convoy has been wildly popular on TikTok. The hashtag #FreedomConvoy2020 has videos totaling 258 million views, while the hashtag #convoytoottawa2022 has 23 million views. The majority of the most popular clips feature footage of the Ottawa convoy from the roadside or showing people cheer the truckers on, such as this video which has been viewed over 4 million times.

However, the convoy is also attracting violent and harmful content and commentary from TikTok users, particularly in posts that target Prime Minister Justin Trudeau. These comments are published as post captions or on-screen captions, for example one video calls Trudeau a “traitor” and another states that he should be hanged for treason. Other posts seen by ISD falsely claim Trudeau is the son of Fidel Castro, a long-since debunked claim.

The original GoFundMe account URL is no longer live, so it is not possible to analyze publicly-available donor and comment data. However CBC carried out such an analysis and noted that a “number of donors identified themselves in comments as living abroad, in countries such as the United States, Australia, England or Poland.”

ISD was able to identify numerous US and international users and communities, many promoting anti-mandate, anti-vaccine positions, that linked to the GoFundMe campaign whilst it was still live. On Facebook, there were a selection of US-based pages and groups that promoted the GoFundMe. Similarly, there was widespread promotion of the GoFundMe campaign among international pages and groups based in Sweden, Austria, Slovenia, Hungary, Slovakia and Greece.

ISD also identified a variety of prominent non-Canadian individuals and groups promoting the GoFundMe on Twitter. These included Maajid Nawaz, a British broadcaster who has embraced and promoted various conspiracies related to COVID-19 and voter fraud in recent years. The Libertarian Party of New York also linked to the GoFundMe campaign, along with Stephen Taul, a prominent cryptocurrency activist based in the UK, who shared it multiple times.

The convoy has been discussed and promoted among extreme right-wing communities monitored by ISD. The GoFundMe campaign was shared by at least three white supremacist channels on Telegram, and daily devoted threads were launched on 4chan to discuss the convoy. ISD counted at least 25 different threads on 4chan in which the GoFundMe link was also shared between 28 January to 5 February. Due to the anonymity offered by both platforms, it is not possible to independently confirm where the users linking or promoting the GoFundMe campaign on Telegram and 4chan are based.

In response to the removal of the GoFundMe campaign, 4chan users also launched a campaign called ‘Operation Chargeback’, which encouraged people who donated to the original campaign to “dispute” the charge with their credit card companies instead of accepting a refund. 4chan users claim a chargeback will allegedly cost GoFundMe $15 and widespread use of this would be a significant disruption for GoFundMe. The idea of forcing GoFundMe to pay chargeback fees has also been promoted by US right-wing content creators on Twitters too, including Terrence K. Williams and Tim Pool.

GiveSendGo is a crowdfunding platform that grew in popularity in 2020 when it became the platform-of-choice for supporters to raise funds for the defense of Kyle Rittenhouse. It has since become highly popular among right-wing communities in the US and beyond.

Following GoFundMe’s decision to axe the convoy campaign, the official social media pages for the convoy redirected users to a new crowdfunding campaign they launched on GiveSendGo. At the time of writing, over $8.7 million has been donated to this campaign. A quick analysis of the donors confirmed that this campaign is receiving international support, with messages posted by donors stating they are located in countries like the UK, Israel and the US. The GiveSendGo page has also been promoted by high–profile US content creators and activists like Jack Posobiec and Candace Owens, as well as former Arizona State Senator Kelli Ward.

Notably, another community that has expressed support for the convoy are cryptocurrency activists. On 1 February, Twitter account HonkHonk Hodl (also created on 1 February) launched a Bitcoin cryptocurrency crowdfunding campaign. ISD did not surface any information to confirm if this campaign is officially linked to the convoy.

According to the crowdfunding page, the campaign has raised over 160,000 SAT, which are described as Satoshis, or the ‘cents’ part of Bitcoin, which equates to 1.6 BTC or $66,340. A scan of the donors to the campaign indicates that this support is coming from the Netherlands, France, UK, Italy, Sweden, Estonia, Italy, US, Costa Rica, Panama, El Salvador. Supporters of the campaign have promoted Bitcoin as an alternative to GoFundMe, GiveSendGo or other forms of finance that could be regularly or curtailed by domestic or state authorities.

Convoys inspired by events in Canada are being discussed and planned in many other countries worldwide, including by Telegram channels that have been set up to spread event information in a manner similar to the ‘World Freedom’ rallies noted throughout 2020 and 2021. As shown below, a ‘Worldwide Freedom Convoy’ channel lists hashtags for organizing events in 28 countries. 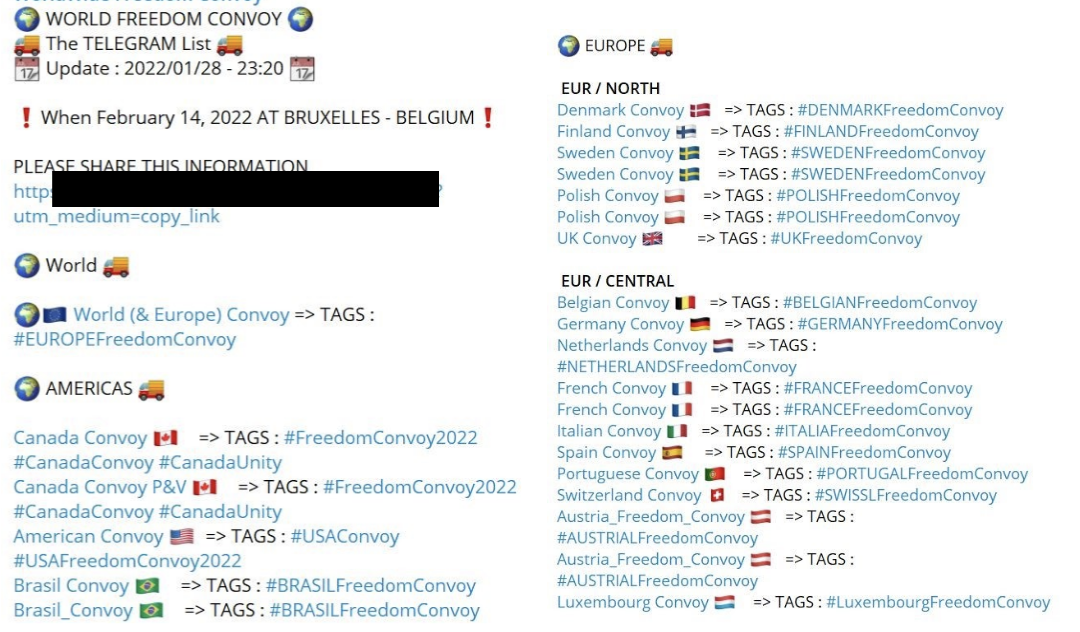 Lists of organizing hashtags shared on a Telegram channel

Another channel called ‘Euro Convoy’ lists options for group chats planning convoys across almost 30 countries. The linked group chat for France has 24,000 subscribers, the one for Australia has 31,000 and the Netherlands, 32,000. This indicates the scale with which these convoy-inspired communities and it’s likely accurate to say that hundreds of thousands of Telegram users have expressed an interest in organizing protests similar to Canada.

Online groups linked to the EU protest movement state that a convoy is planning to travel to Paris on February 13 before moving onto Brussels, the home of the EU parliament, on February 14. Much of the initial organizing appears to be coming from French communities inspired by the convoy, based on French media, and they too are organizing online – one influential Facebook group used by these activists has 297,000 members.

The Canadian convoy has also inspired COVID-19 protest groups in the US to attempt to organize a convoy to Washington DC on March 1 to coincide with Biden’s SOTU address. Inspired by events in Canada, online users in the US launched a Facebook group called ‘Convoy to DC 2022’ that encourages truckers to organize a convoy and travel from California to Washington DC in protest of vaccine mandates. The Facebook group was removed on February 2, but not before it had amassed 200,000 members, according to a Facebook post from one of the original administrators. This user was called Brian von D, who could possibly be the same Brian quoted by Fox News as a co-organizer behind the Facebook group.

A replacement Facebook group called ‘Convoy To DC 2022 RESTART’ has already been created by Brian Von D and currently has 14,000 members. A linked Telegram channel is currently at over 4,000 subscribers too. On the Facebook group, Brian Von D promoted the new group and said “Today people are evil. Just know my passion is your passion. Know that is Convoy is still happening.”

This user appears to be leading efforts to organize a US convoy. On 7 February, he posted on Facebook to say “Canada trust me we are coming! Stay strong. Big press release coming tomorrow night. Can’t wait! See you soon California”. He is also an administrator on The People’s Convoy, a Facebook group which has 42,000 members.

There are also comments and posts online stating that organizing and planning for a proposed DC convoy is beginning to cement.

Taking into account the events in Ottawa, the anger and hostility driving much of the campaign, the protest movement’s acceptance and support of conspiracies and misinformation and implicit and explicit links to extremist groups, there are some glaring comparisons to the Capitol insurrection on January 6, 2021.

* Providing direct links to hateful and conspiracy theorist channels and content brings with it several ethical risks. This includes the danger of providing oxygen to dangerous narratives and content, directing individuals to hateful and conspiratorial content and also in publicly identifying individuals involved in these communities. In reflection of these risks, we have not provided direct links to the content and channels analysed in this article. However, we can supply a list of references to the content analysed on request.

Ahead of the Italian elections, this dispatch examines how the pandemic has pushed users toward alt news sources that are now spreading pro-Kremlin disinformation.

Australia is on the cusp of voting for a constitutional referendum that would create a representative body for the Aboriginal Australians, but a lack of official information is creating space for hate speech and conspiracy theories.