COVID-19 vaccine misinformation is giving rise to threatening comments and discussions online as well as increasing the risk of detrimental public health outcomes offline. In the Netherlands, protests against COVID-19 restrictions and evening curfews have generated anger and hostility, resulting in riots, as well as a small explosion and arson attacks on vaccination centers in January and March.

For more on the methodology used, see here.

➜ Dutch COVID-19 misinformation communities on Facebook have grown by 63% in the past six months.

➜ Across a sample of 75 public groups and 53 pages in the Netherlands that regularly feature COVID-19 vaccine misinformation, as of 30 April 2021 there are now over 789,400 Facebook users that like these pages/are members of these groups, compared to 484,100 users on 31 October 2020.

➜ There is an inconsistent approach to fact-checking similar pieces of misleading COVID-19 vaccine content on Facebook, as evidenced by the spread of a Dutch vaccine misinformation video across Facebook – both within and beyond the Netherlands.

➜ National databases for monitoring adverse vaccine reactions are being misused to spread misleading and alarmist messaging about COVID-19 vaccines.

➜ There are signs that Facebook is serving as a gateway for COVID-19 extremist discussions on other online platforms in the Netherlands.

Misinformation specifically about the vaccine

Misleading Pfizer vaccine video goes global. A video first uploaded on Facebook by a Dutch anti-vaccination and flat earth conspiracy theorist has generated a wave of COVID-19 vaccine fears in the Netherlands and across the globe. The spread of the video among online misinformation communities in the country highlights the inconsistencies in how Facebook applies fact-checking labels to unverified and misleading content.

The video has only been subjected to one fact check to date, from Ukrainian organisation and Facebook fact-checking partner VoxCheck. VoxCheck state that there is no evidence that the video in fact shows the Pfizer vaccine, reaffirm that the vaccine contains no living organisms and lastly, said the video most likely shows Brownian motion, which is the random and chaotic movement of particles when suspended in a liquid or gas.

Despite the video’s unverified and misleading nature, it has spread widely across Facebook, where it has been shared at least 3,842 times, and ISD discovered six posts featuring the video on Instagram which have been viewed over 10,000 times. Only two of the posts on Instagram feature a fact-check from VoxCheck. On Facebook, native uploads of the video now feature VoxCheck’s article that states the content is “partly false” and “has some factual inaccuracies.”

Facebook’s policy on COVID-19 misinformation outlines their aim to remove false claims about “the safety, efficacy, ingredients or side effects of the vaccines,” and in February, the company expanded their policies to include all vaccine-related misinformation. However, these examples represent distinct shortcomings in the platform’s fact-checking procedures, and point to a clear inconsistency in the platform’s response to misleading and potentially harmful content about the coronavirus.

Misinformation about the vaccine rollout

Databases which list adverse reactions to the vaccines are being used to fuel anti-vaccination anxiety. During April, Dutch misinformation communities promoted articles from a number of Dutch conspiracy websites that claimed the British government reported 847 people had died after receiving a vaccine in the country. Three articles discovered by ISD have received at least 296 shares to date. These reports claim 61 women suffered miscarriages, 12 people suffered strokes and 112 people were blinded. These figures were all taken from an article published by LifeSiteNews, a Canadian right-wing conspiracy website, who were themselves banned from Facebook in May for violating the platform’s COVID-19 and vaccine policies.

LifeSiteNews’ report was based on figures from the UK’s Yellow Card scheme, an initiative run by the UK government’s Medicines and Healthcare products Regulatory Agency (MHRA). The scheme relies on “voluntary submissions” for reporting adverse drug and vaccine reactions and the MHRA clearly states that the listing of an adverse reaction in the database does not mean “that the vaccine has caused the suspected reaction.” They further state that “conclusions on the safety and risks of the vaccines cannot be made on the data.” Yet, multiple LifeSiteNews reports do just that, using these figures to fuel COVID-19 fears.

This example serves to highlight the international nature of COVID-19 vaccine misinformation and demonstrates why government-run user-generated databases for reporting adverse reactions can be problematic. The BBC and ABC News Australia have both reported on how the Yellow Card scheme has been used to promote COVID-19 vaccine misinformation, while in the US the VAERS system has been misused in similar ways. ISD has also tracked activity suggesting conspiracy communities in the Netherlands are targeting the country’s own adverse reaction reporting agency, Lareb.

Other cases of misinformation about the vaccine rollout

Unverified claims about vaccine injury and death are highly popular. Among the 2,759 Facebook posts from Dutch COVID-19 conspiracy pages and groups analysed by ISD, three of the top ten posts that received the most engagement highlighted cases of people who suffered adverse reactions or died some time after receiving a COVID-19 vaccine. In each of the three cases, the incident is under official investigation, however the Facebook communities analysed have used these examples to claim COVID-19 vaccines are not safe.

Misinformation about the societal impact of a vaccine

Party leader is targeted with misinformation and anti-Muslim claims over vaccine comments. Speaking in late February, Sigrid Kaag, leader of the D66 party, expressed support for the use of vaccination certificates to expedite the reopening of restaurants, shops and wider society. Kaag’s comments lead to criticism from opposing groups, who claim such a system is an indirect way of forcing people to get vaccinated. The online conspiracy communities analysed in this research also targeted Kaag over these comments, with one trending meme claiming that Kaag wants to introduce a vaccine passport, along with further false and exaggerated claims alleging that she wishes to prohibit the eating of meat, abolish civil rights in the country as well as agriculture and livestock.

ISD observed violent and threatening comments posted about Kaag in response to this meme, as well as numerous comments stating she is secretly a Muslim, a false claim that is regularly circulates on social media. As highlighted in previous ISD vaccine misinformation briefings related to Ireland, Canada and MENA, the possible introduction of vaccine certificates or passports is continuing to give rise to misinformation, conspiracies and threatening commentary among COVID-19 misinformation communities online.

Facebook is serving as a gateway for off-platform COVID-19 extremist discussions. There is evidence from this research that Dutch Facebook COVID-19 conspiracy communities are being used as a space to promote and advertise Telegram channels and group chats that feature more explicit and extremist anti-vaccine discussions. Throughout April, ISD found links to COVID-19 conspiracy Telegram channels and group chats shared 38 times. In one of the Telegram channels observed by ISD, users instructed others to “rise and end this madness” and encouraged people to join the sovereign citizen movement, which is made up of people around the world who believe they are “immune from government rules,” including those designed to mitigate against the spread of COVID-19. In the US, the FBI has described followers of the movement as “anti-government extremists.”

In a different Telegram channel, users discussed the possibility of organising demonstrations outside the home of Mayor Fenke Halsema ahead of planned anti-lockdown protests in Amsterdam on 20 April, while others stated that protests achieve nothing and there is “only one solution,” which they elaborated, is the creation of a “civilian army.” Other messages discussed the possibility of organising protests near Schiphol airport, anticipating that their demonstrations could cause sufficient disruptions for flights to be diverted.

According to reports, the Dutch national security service AIVD warned of the threat from anti-government protests organised in opposition to COVID-19 measures, stating that the “intimidation, threats or violence” present in these groups have the potential to create a “breeding ground” for extremism. Based on the activity highlighted above, there is a clear danger that Facebook is being used as a gateway towards groups and channels on other online platforms where such extremist tactics are discussed and encouraged.

This research provides insight as to how the process of vaccine rollout may be undermined by misinformation as online conspiracy communities speculate, share and spread unsubstantiated claims. Tackling COVID-19 vaccine misinformation is an essential step in boosting public confidence in vaccines. The responses of social media platforms, governments and health institutions to this misinformation will be a crucial component in allowing societies to emerge as quickly as possible from the pandemic. 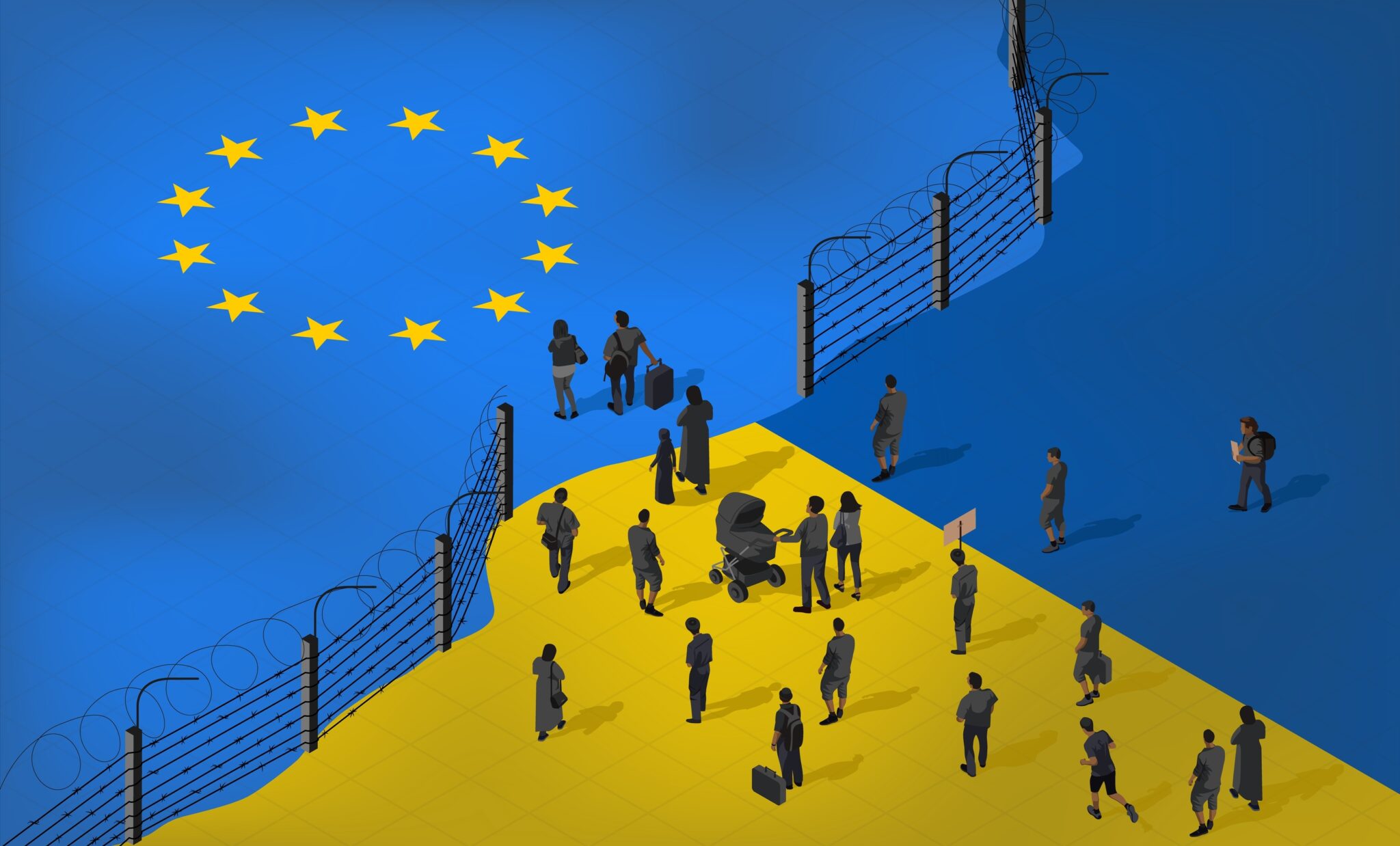