The government worried that Djokovic’s ‘talismanic’ status in the anti-vaccine community could incite unrest had he been allowed to stay. Yet it wasn’t until the government detained him that the case became a cause celebre amongst anti-lockdown groups.

In a dramatic series of events that began on 6 January, the Australian federal government twice cancelled the visa of star tennis player Novak Djokovic, held him in a detention facility in Melbourne and finally deported him late at night after a week and half of high-profile controversy. In the second and ultimately successful attempt to cancel Djokovic’s visa, the Australian Immigration Minister Alex Hawke said that Djokovic’s status as a perceived “talisman of a community of anti-vaccine sentiment” could “incite civil unrest” in Australia.

However, based on available evidence, to the extent that Djokovic’s case has provoked protests and inflamed commentary amongst Australian anti-vaccine and anti-lockdown groups, this inflammation appears to be a direct response to the government’s efforts to deport him. Had Djokovic either been prevented from entering the country from the start, or had he been allowed to enter and play as planned, it is unclear whether he would have excited such a significant response from protest groups.

The initial response from many in Melbourne’s local anti-vaccine and anti-lockdown movement to the news that Djokovic would be coming to Australia was at best lukewarm and tinged with resentment. The “medical exemption” of a rich and famous tennis player from rules which apply to everyone else was extremely unpopular amongst the broader Australian community, and this also appears to have been true among anti-vaccine groups. In the example below, a Telegram post from the anti-lockdown group ‘Reignite Democracy Australia’ on the day before Djokovic’s arrival bemoans the perceived injustice. 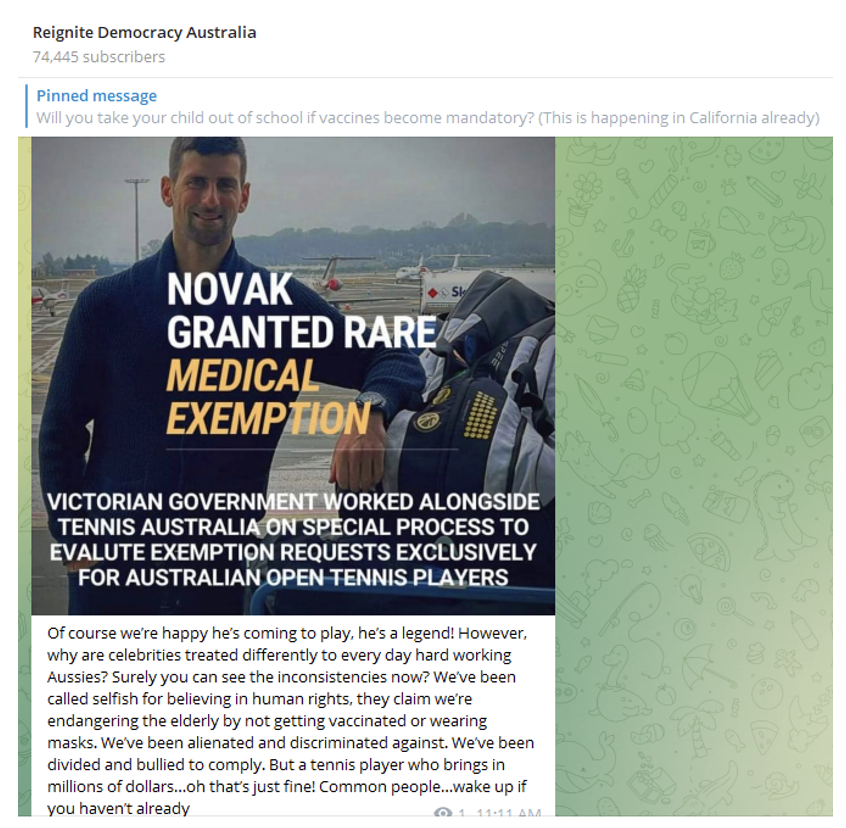 Image 1 – In a Telegram post from 5 January, the anti-lockdown group ‘Reignite Democracy Australia’ expresses resentment towards Djokovic’s arrival in the country.

This attitude changed (quite literally) overnight when news broke that Djokovic’s visa had been cancelled and he had been detained in an immigration facility in Melbourne for failing to “provide appropriate evidence to receive a vaccine exemption”. Anti-lockdown protest leaders immediately sensed the opportunity to launch themselves into the international spotlight generated by Djokovic’s case.

Compare the resentful post above from 5 January with the post below from the same group on 7 January asking if Djokovic is the “beacon of hope Australia has been waiting for.” The group also sought to get in touch with Djokovic, members of his family and Serbian politicians. 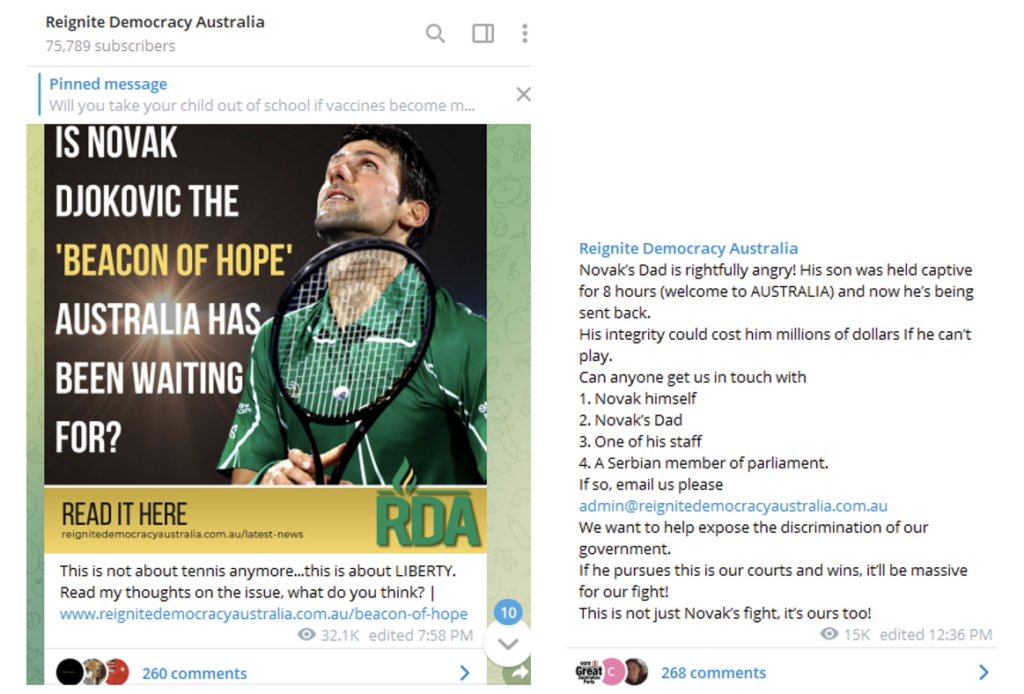 Anti-lockdown movement leaders were quick to involve themselves

However, despite the energetic support from movement leaders who sensed an opportunity for free international publicity, attitudes towards Djokovic amongst anti-vaccine and anti-lockdown communities appear to be ambivalent.

Polling published over the weekend found that only 38% of UAP voters wanted Djokovic to stay and play, 31% thought that Djokovic should leave, and another 31% did not care. While not all anti-lockdown activists are UAP voters, this is a good rough barometer for general opinion amongst the anti-lockdown and anti-vaccine communities.

Some believe that Djokovic is a Freemason, a Satanist paedophile or enmeshed in other conspiracy theories. Others feel that his saga is a distraction from the ‘real fight’ against vaccinating children, or resent being told to fight for the rights of a wealthy and powerful tennis player rather than for issues which directly affect them.

Ironically given the Immigration Minister’s assertions that Djokovic’s presence would cause “civil unrest,” this ambivalence has meant that anti-vaccine protest organisers appear to be having difficulty in organising protests supporting Djokovic. The screenshot below of a Telegram exchange between an anti-lockdown organiser and commenter is a good example of this tension playing out. 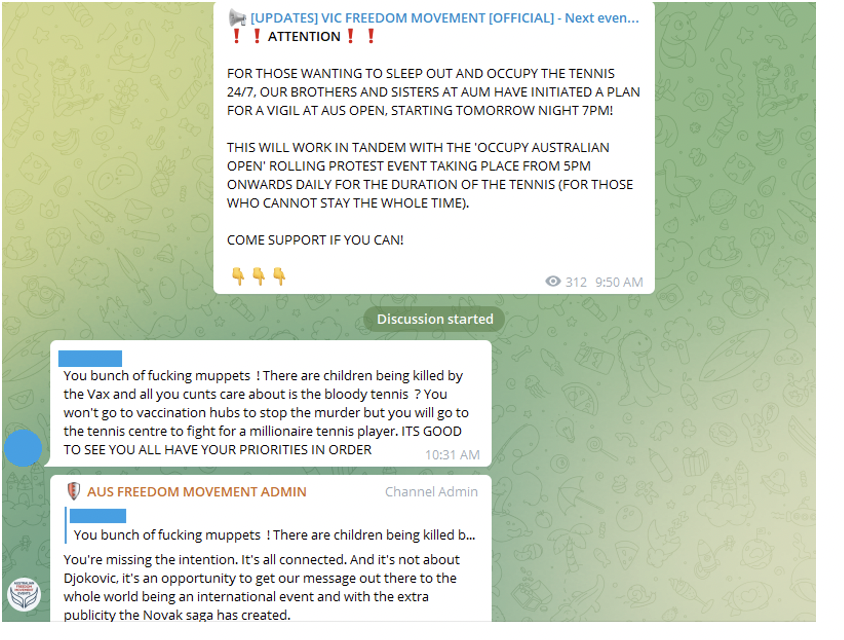 Image 3 – A Telegram exchange between an anti-lockdown protest organiser and commenter in the group.

Although there were a series of noisy demonstrations in support of Djokovic during the time that he was detained, the majority of attendees appear to have been Serb and Croat Australian supporters of the tennis player. Conspiracy theory chants and slogans were shouted during a brief but intense clash between protesters and police on the evening of Monday 10, but these protests remained small. Additionally, the now-regular weekend anti-vaccine rallies in capitals across the country also appeared to be relatively small by recent standards.

In short, it’s not clear based on available evidence that Djokovic’s presence was likely to inspire significant unrest beyond the protest actions already taking place in the country.

However, the decision to deport Djokovic based on his purported high profile anti-vaccination stance (rather than on the initial grounds that his medical exemption was invalid or his admission that he had made a false statement on his border declaration) appears likely to turn him into an international martyr for the anti-vaccination cause.

It also sits in contrast to the government’s attitude towards anti-vaccine advocacy in its own ranks. Several members of the government have become prominent spreaders of misinformation about COVID-19 and vaccinations. Government MP George Christensen recently used the parliamentary chamber to call for “civil disobedience” in response to vaccine mandates.

On 11 January, in the midst of the Djokovic saga, Deputy Prime Minister Barnaby Joyce said that Christensen had “a right” to spread conspiracy theories about COVID-19. Christensen and two government Senators are scheduled to speak in a ‘Prayer and Pushback’ online event alongside international anti-vaccine advocate Robert F Kennedy Jr, as well as Craig Kelly and Reignite Democracy leader Monica Smit.

It will take time for the full implications of the Djokovic deportation to become clear. However, in the short-term, it seems likely to result in some protest action outside Rod Laver arena where the Australian Open is being held, although it is unclear how great the enthusiasm is for such protests among the local anti-vaccine movement. A planned protest yesterday evening was largely a flop, with only around 40 people turning up and “mostly sitting and talking among themselves”.

The lasting significance of the decision for Australia may be in the precedent it sets. While Djokovic’s deportation is overwhelmingly popular amongst Australians, civil rights groups have raised concerns about the implications for freedom of expression, particularly if the same principle is applied to other contentious political and social issues. Ultimately, whether Djokovic’s case was an isolated one, or if the situation represents a broader policy shift on the part of the Australian government, remains to be seen.