This Dispatch breaks down a propaganda campaign that is being orchestrated by an antisemitic hate group in the US. The campaign is successfully manipulating media coverage to directly promote its hateful, conspiratorial ideology.

The Dispatch explains how online campaigns like this offer extremists and their supporters DIY toolkits to express hatred against others. It also explains how this media manipulation campaign fits into a wider history of similar efforts. It concludes with a set of recommendations for newsrooms and media to avoid unintentionally amplifying or contributing to extremists’ conspiracist propaganda.

A hate group active across the US is using its nationwide network online to orchestrate an antisemitic, COVID-19 conspiracy theory flyering campaign. This campaign is baiting and hijacking local and national media, online news sites and civilians into unintentionally contributing to and amplifying its campaign.

The campaign fits into a broader history of how extremists try to mainstream their hateful and harmful ideologies, often through attempting to distort media coverage, manipulate news outlets and trick others into amplifying their propaganda. News media must be aware of the intentions of groups behind campaigns like this. Such intentions include; causing outrage, which serves as a catalyst for news coverage and garners increased attention at little to no cost; and promoting their network and its hateful ideology as a means of attracting support and potential recruits.

In this case, media outlets are helping to mainstream this extremist network and its hateful, dehumanising ideology without meaning to do so. This mainstream amplification has enabled the group’s material to reach far greater audiences than it could have ever achieved organically.

This dynamic is detailed by Whitney Phillips in her report, the Oxygen of Amplification (Part 1). She wrote that, “The takeaway for establishment journalists is stark… just by showing up for work and doing their jobs as assigned, journalists covering the far-right fringe… played directly into these groups’ public relations interests”. This Dispatch breaks down the group’s campaign and looks at the wider issue of extremists attempting to manipulate the media for their own needs.

The attention-seeking tactics of antisemites

The Goyim Defense League (GDL) is a loose network of antisemites and white supremacists. Since December 2021, individuals associated with the GDL have distributed flyers in neighbourhoods across the US, as part of a propaganda challenge issued by the GDL leader, Jon Minadeo. Those active in this network have a history of hanging antisemitic banners on busy overpasses, tagging buildings with hateful graffiti and coercing young people on live-video platforms like Omegle into reading antisemitic slurs and and slogans. Clips of these young people are then shared online by the GDL in a copycat of the online harassment format (i.e. ‘trolling’) popularised by jailed white supremacist Paul Miller.

The Anti-Defamation League reports that flyers have been discovered in at least 17 states to date. They add that in a video posted online, Minadeo promised a reward to anyone whose efforts result in news coverage about the flyers. The GDL routinely seek media attention through their inflammatory tactics. Rob Eshman, an editor with the Jewish publication Forward, described this when he wrote; “each time it happens, coverage follows in the local and Jewish press, and in countless social media posts. A toxic ecosystem has developed in which the flyers feed the press, which brings notoriety to the flyer-makers, who make more flyers”.

Image 1: Examples of coverage from local and national TV news media about GDL that have been used in the group’s propaganda.

The DIY approach to spreading hate

In a follow-up video published online, Minadeo told followers; “Do you want to get your flyers on the news? Let’s give you some shortcuts. What you do is you get this COVID thing [flyer] from our Telegram, get some plastic bags, you find the richest area in the city, you throw those all over their neighbourhood and I guarantee it, your flyers will make the news”.

The flyers are often distributed in plastic bags filled with rice, pebbles or other items to weigh them down as they are flung from moving vehicles. The material includes graphics, memes and text promoting an antisemitic conspiracy theory which claims that the COVID-19 pandemic has been engineered and planned by Jewish elites and organisations. The flyers also include links to the GDL’s online video platform. The platform is populated with further antisemitic conspiracies, slur videos, and many embedded dead or private links to other video platforms like Bitchute.

The group’s Telegram channels serve as the central hub to store high resolution versions of their flyers, and instructions for supporters on how to print and distribute the materials and participate in the campaign. This decentralised DIY approach to spreading hatred is becoming more common among extremist groups operating in plain sight online.

How the Goyim Defence League are manipulating the media

It is clear that the GDL both anticipate and wish for media coverage and public outrage from this campaign, yet the media have unwittingly become a part of the campaign too. In two videos released and promoted by the GDL after different flyering rounds, the propaganda material features news clips from local news outlets reporting on the flyers. Video clips edited together to either be synchronised or play consecutively show reporters saying “antisemitic flyers” and simultaneously reading out the title of the flyer, which itself promotes the antisemitic conspiracy theory, in unison.

In one video, Minadeo instructs supporters on how to get flyers picked up by news media. When he does so, the video goes black before revealing all the news outlets that unintentionally repeated the title of the flyer. A more recent campaign by the GDL focused on spreading flyers that promoted antisemitic conspiracies theories about Russia’s invasion of Ukraine. This campaign employed the same method of featuring consecutive or synchronised clips of news reporters reading the flyer’s content aloud.

In doing this, the GDL has gamed the media and, in particular, baited local media into unintentionally amplifying its antisemitic, COVID-19 conspiracy theory flyers. It has used their coverage to help bolster its profile, add to the propaganda material it distributes online, aid its recruitment efforts and increase public exposure to its hateful ideology.  In short, in many instances, the media are doing their work for them.

Since the beginning of this campaign (December 2021), ISD has identified at least 879 reports about the flyers from 471 different news and media outlets and websites. These include local affiliate TV news stations and national titles like CNN and the Washington Post. Only a small number of these reports and outlets have been promoted or used by the GDL in their propaganda campaign. However, coverage from such an expanse of media outlets, from local to national, will have undoubtedly served to bring the campaign to a wider audience than the GDL could have achieved through organic reach. 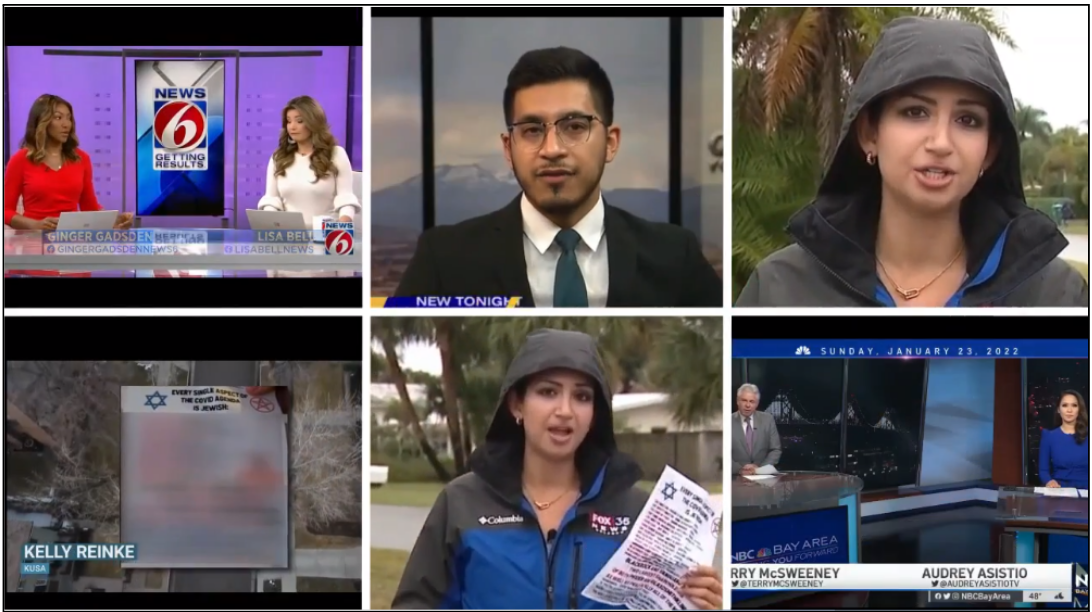 How have extremists manipulated the media?

Extremists have a long history of seeking to manipulate the media for their own needs. The Islamic State used social and digital media to spread propaganda, recruit followers and garner international coverage of their gruesome acts. In 2018, white nationalists fooled researchers and the media by spreading a false claim that the mass shooter Nikolas Cruz was a member of a white supremacist group in Florida. In 2017, users on 4chan launched a campaign to falsely promote the ‘OK’ hand gesture as a white power symbol and trick media into covering and describing it as a genuine hate symbol. The hoax paid off and the gesture was even adopted by many right-wing extremists too, meaning it was effectively memed into existence. There are still many examples of media reports today who wrongly describe it as a traditional display of support for white power without recognising or mentioning its origins as a manipulation campaign that aimed to deceive many.

Findings from our 2017 report, The Fringe Insurgency: Connectivity, Convergence and Mainstreaming of the Extreme Right, still bear true today. This research highlighted how contemporary extremist groups and movements seek to use strategic mouthpieces and the targeted manipulation of media to launder information through spaces, platforms and communities where extremism is typically absent or scrutinised. Coordinated harassment, hijacking media coverage and spreading extremist materials through other sources are all central to extremist groups’ efforts to normalise fringe narratives and mainstream their hateful worldview.

How can we combat extremist media manipulation?

The scope of this dispatch means that only one small case study was used to highlight the field of extremists attempting to manipulate the media. Yet this case study illustrates how this issue remains an ongoing challenge for media and research communities. For members of the media, Phillips’ Oxygen of Amplification (part 3) details tips and helpful procedures for newsrooms and reporters to follow when reporting on online extremists. All of Phillips’ guidance is worth visiting. However, one tip is particularly relevant here: “Avoid assigning breaking stories about online communities or behaviours to people unfamiliar with those communities or behaviours”.

Flyering campaigns advocating for antisemitic, white supremacist or other extremist ideologies do not operate in the same dynamic as they did pre-internet or pre-social media. Today, a group or network releases such material in the hope that others will amplify their propaganda online on their behalf, subsequently doing their work for them and unwittingly contributing to their campaign. Though not the focus of this dispatch, much the same can be said of reporting in the wake of a mass shooting or a terror attack. Manifestos or livestream footage are designed to serve as propaganda and fodder to be dissected and discussed by media and online communities. While it’s important to report on them, caution is advised.

To finish, some of the questions the media would do well to consider before reporting on extremist material like that discussed here include: