Last week, YouTube made headlines when it took down an episode of one of the world’s most popular podcasts, the Joe Rogan Experience, over anti-vaccine misinformation promoted by Rogan’s guest, Dr Robert Malone.

Malone has previously been banned by Twitter for spreading COVID-19 misinformation. A coalition of over 270 medical professionals have since signed an open letter in response to the podcast episode, calling on Spotify to stop allowing the spread of misinformation.

Yet there is at least one platform where Malone is still able to freely promote, and profit from, health misinformation: Substack.

Substack bills itself as a platform for independent writers. It allows anyone to publish, and gives writers the option of setting up a tiered model of subscriptions for access to premium content. The company makes revenue by taking a percentage of subscription fees.

Malone is not the only high profile anti-vaccine advocate currently building his brand – and his bank account – on Substack. As of January 11th, 2021 Substack’s list of top paid political newsletters features prominent COVID-19 misinformation spreaders Alex Berenson at number 6, and Steven Kirsch at number 19.

At number 13 was Joseph Mercola, who has become infamous as one of the most influential voices spreading misinformation about COVID-19 and vaccines during the pandemic. While it is not clear exactly how much money Mercola is making from Substack, the platform indicates he has ‘thousands of subscribers’ paying $5 a month (Image 1).

Mercola is open about the fact that he is using Substack to publish content which even he himself considered too controversial to keep on his own website. In May 2021, he deleted posts on his site which promoted a range of false COVID-19 cures, including  effectively inhaling bleach. In a Substack post on January 3 2022, Mercola announced that he would be bringing his deleted content back by publishing it on the platform. “The reason I chose a paid membership platform on Substack is because it will protect all of my content from censorship. For just $5 a month, or the discounted annual rate of $50 per year, you will have access to all of my articles, all the time, even after they’ve been deleted from Mercola.com,” he wrote.

As an example of Mercola’s content, a recent Substack post from January 9 is headlined ‘More Children Die from the Covid Shot than from Covid’. This is a claim which has been repeatedly fact checked and found to be false.

The migration of users who have been banned on other platforms to Substack appears to be playing out in other contexts as well. The QAnon conspiracy community, banned from most mainstream platforms, is developing a growing foothold on Substack.

Major QAnon influencers Jordan Sather, Patel Patriot and Techno Fog post regularly for both free and paid subscribers, while in the comments QAnon followers engage with one another to debate and share conspiracy theories (Image 2).The Techno Fog Substack has even been cited by Tucker Carlson as a source for false claims Carlson made on air about vaccine trials in children. 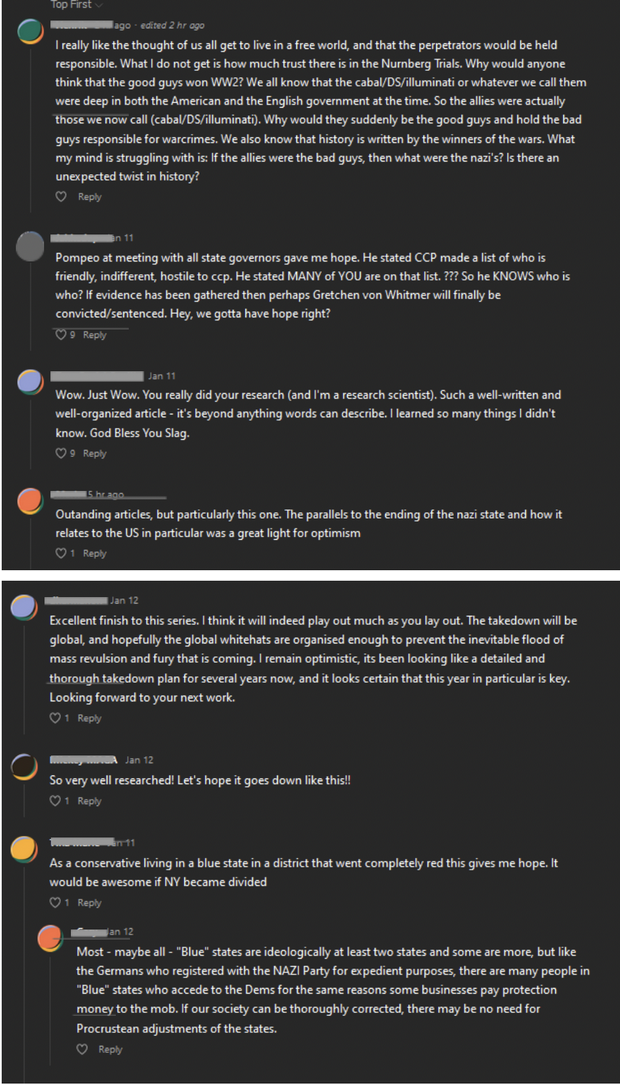 White nationalists who have been banned from other platforms are also making a home for themselves. In October 2021, white nationalist group Europa Invicta posted excitedly that, “What we like most about Substack is that we can now communicate with you directly… Our ability to bring you more is amplified now – new and multiple types of content can be shared and accessed all from one place” (Image 3). And in November 2021, Patrick Casey, formerly a leader of white nationalist group Identity Evropa, also began actively using Substack.

Casey is banned by many platforms and services, including Substack’s payment provider Stripe. He is subsequently having to monetize his writing on Substack via SubscribeStar, an alternative to Patreon and other subscription-based content delivery services that has become popular with influencers deplatformed elsewhere due to its comparatively permissive terms of service (Image 4).

All of this is likely to pose a challenge to Substack’s hands-off attitude to content moderation. In a blog post a little over a year ago, the platform’s founders laid out a laissez-faire approach, arguing that Substack is fundamentally different from other platforms which have imposed more stringent content moderation policies.

The founders have outlined a strongly pro-free speech vision of content moderation which – as they acknowledge in the post – is strikingly similar to those espoused by Facebook, Twitter and YoutTube in the past, prior to those platforms’ significant evolution in content moderation over recent years.

In explaining why they think Substack’s trajectory will be different, the founders argue that “the major issue, we think, is that business models based on engagement have created a class of wildly successful media products that distort online discourse. It is increasingly difficult to participate in reasonable discussions on these platforms.”

Substack hopes to avoid these pitfalls due to its business model, which uses subscriptions – rather than advertising revenue – as its key metric. However, subscriptions are still a form of engagement and there is no good reason to think that engagement via subscriptions is less likely to incentivise “the rage-clicks, the hate-reads, the pile-ons [and] the conspiracy theories” that other forms of engagement generate, as suggested by the platform’s founders.

Quite the opposite, some have argued that the platform’s design favors polarizing commentary, monetized outrage and inter-personal squabbling between high profile writers as they play to their respective audiences. At least three high profile promoters of COVID-19 misinformation have made it into Substack’s top 20 paid political newsletters, suggesting that Substack’s business model may be not better at repelling misinformation than those of other platforms.

Substack also does not exist in a vacuum from other platforms. In a 2020 interview with The Verge, co-founder Chris Best said:

“A lot of the worst problems that content moderation addresses on other platforms is the spread of content that is bad, because basically your algorithmic feed is serving as an editor, whether you think of it that way or not. And I’m getting bad crap in my Facebook feed because some uncle of mine liked it or because it’s getting engagement. That problem doesn’t exist on Substack in the same way.”

A safe haven for the deplatformed

It should be concerning to Substack that their platform appears to be gaining a reputation as a safe haven for those banned from other platforms. For writers and journalists, reputation is crucial. If Substack becomes known as a platform for anti-vaxxers, conspiracy theorists and the far-right, it will be difficult to attract the kind of credible, high profile writers which Substack has been courting.

There is a sharp irony to Substack’s selection of respected doctor Eric Topol as their Writer in Residence, even as the company draws revenue from writers like Mercola and Malone.

Recent history has shown that utopian visions of untrammelled speech online leading to robust, respectful debate rarely survive contact with reality. That moment of reckoning is coming up fast for Substack. The platform will have to decide what to do about it – and hopefully before any readers take Mercola’s advice published on Substack about inhaling bleach.