*This article has been published in English and German. For the German language version, please see below.

For several years, narratives about an allegedly high risk of electoral fraud have been spread online in Germany. Against this context, in the lead up to the German federal election on 26 September 2021, ISD analysts in Germany conducted ethnographic monitoring of the platforms Facebook, Twitter, Instagram, TikTok, VK and Telegram. This analysis was conducted to identify organised efforts to undermine public trust in the integrity of the election.

In both the lead up to the election, and on the election day itself, ISD analysts found evidence of organised efforts to undermine public trust in the integrity of the election in Germany. On election day, actual and alleged errors and irregularities in polling stations were taken out of context to serve as supposed evidence of systematic electoral fraud. In turn, properly run procedures were also misconstrued and presented as evidence of a compromised election.

Analysts observed that users on several platforms made reference to various conspiracy theories as they denied the integrity of the election, and that the majority of electoral disinformation was found in the online communities of Alternative for Germany (AfD) party supporters, COVID-19 sceptics, and right-wing extremist groups.

Electoral fraud narratives in the run-up to the election

In 2016, the far-right German organisation “EinProzent” – which dubs itself the “largest patriotic citizen network in Germany” – began sowing mistrust in the legitimacy of democratic processes, calling on its supporters to become “election observers”.  Four years later in 2020, Donald Trump (at the time US President) began casting doubt on the legitimacy of the November presidential election months ahead of it, questioning the security of absentee ballots.

Similar narratives were also spread months prior to the German federal election on September 26, 2021. Originating in German right-wing populist and conspiracist communities online, these narratives harnessed disinformation about the alleged election fraud in the US to support the argument that the same thing could happen in Germany. 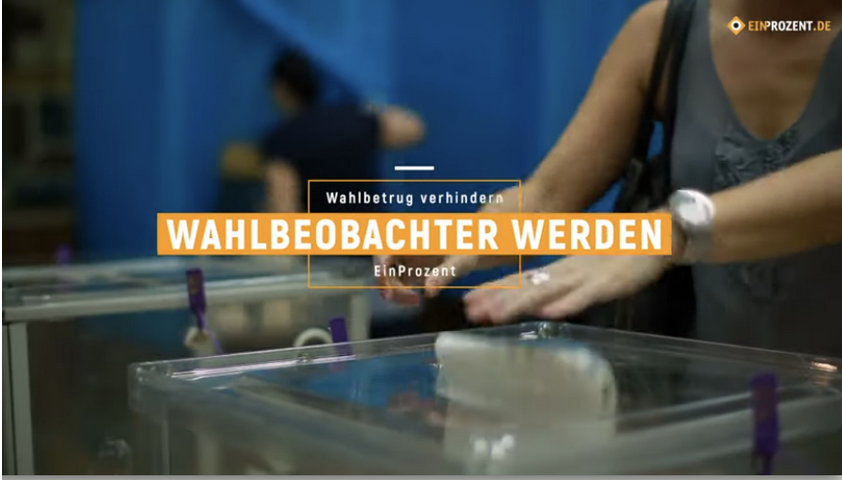 Screenshot of a video produced by EinProzent in 2021 calling for election observation “to prevent fraud”.

ISD Germany’s monitoring work found evidence that the AfD sought to erode trust in the election, especially with regard to postal voting. For example, immediately before postal voting began, the AfD placed paid advertisements on Facebook and Instagram alluding to the fact that postal votes were particularly susceptible to manipulation. In the weeks leading up to the election itself, official accounts of the AfD and AfD party candidates posted content calling for election monitoring – such calls which were always paired with claims that there could be no certainty that the election would be fair and secure, and that “trust is good” but “control is better” (see screenshot below). 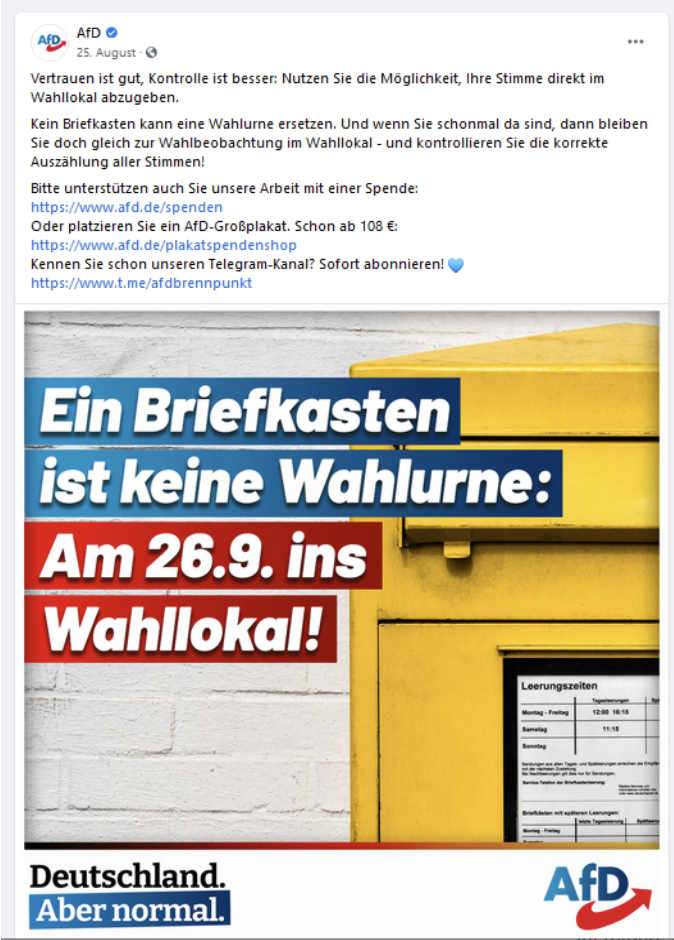 Screenshot of a post on the official AfD Facebook page calling for it’s followers to avoid postal voting, and to stay in polling stations to observe the ballot counting.

Electoral fraud narratives in the days around the election

On election day, chaotic voting conditions in Berlin were taken as evidence of deliberate election manipulation. his included ballots for the election of the Berlin House of Representatives going missing and being mixed up, as well as long queues in front of the polling stations. For example, in one far-right Telegram group chat that was monitored by ISD analysts, and which had several thousand participants, a user claimed that supporters of the Green Party had allegedly voted several times in Berlin and that this was the reason why the polling stations remained open after 6 pm (as seen in the screenshot below).

An error in Göttingen, where counting lists had to be exchanged in 111 polling stations because the AfD party was missing from the respective lists, was interpreted as a targeted attempt to manipulate the election to the AfD’s disadvantage. On election day, the link to an article about the incident was the most shared URL in tweets containing the phrase “election fraud” (695 tweets).

The mishap of the German public TV channel ARD displaying “projections” during a technical test on September 24, 2021 was seen as evidence of manipulation. AfD candidate Markus Motschmann posted a comment on Facebook to this extent: “This regime of corrupt morons doesn’t even manage to cover up the staged election fraud!”. This narrative was amplified by the Russian state news channel RT DE, who published an article titled, “Strange events at ARD: public-service broadcaster publishes projections – two days before the election”. At the time of writing, RT DE’s Facebook post “Does ARD already know how the election will turn out?” gained more than 5,500 interactions (likes, comments and shares), and was primarily shared within far-right and COVID-19 sceptic Facebook groups.

The Union candidate for chancellor Armin Laschet’s violation of ballot secrecy during his vote in Aachen caused online doubts about the validity of his vote. Furthermore, the incident led to the hashtag #Laschetkannsnicht trending on Twitter, with 2906 tweets alone using it on election day.

Electoral procedures that went correctly were also interpreted as evidence of election manipulation. For example, users of a far-right Telegram group chat with several thousand participants reported ballots with a corner missing; ballot boxes that were not sealed; or voters’ ID cards not being checked at polling stations. Although all these processes did not constitute any errors or violations of electoral law, they were repeatedly interpreted as evidence of alleged electoral fraud. This happened even after independent fact checks were published and correct information was shared in the group chat.

Laschet’s blunder at the polling station drew, among other things, comments that the lock on the ballot box seen in Laschet’s video had not been properly sealed and that this was undeniable evidence of electoral fraud. Similar allegations were found across the platforms monitored, where more images of a ballot box in Preußisch Oldendorf (NRW) with an allegedly broken seal were shared and interpreted as evidence. An inquiry by the fact-checking service Correctiv for  the polling station in question revealed that it was a photo from the last federal election in 2017.

Members of the AfD took up the ‘problem’ of the ballot boxes not being sealed. On election day, a video was circulated on Twitter with the statement: “Ballot boxes not sealed, ballots missing, voters sent home, dead people given ballots. It is insane #btw21 #election2021 #electionfraud”. In the video, which has three thousand views at the time of writing, AfD’s candidate in Berlin Charlottenburg Eva-Marie Doerfler commented on the election irregularities in Berlin, bolstering her comments with anecdotal evidence to claim, “In my case, the ballot box wasn’t sealed and there were already people sitting there who had started counting. And none of that is admissible”. Doerfler goes on to say, “Guys, I’ve always said election rigging definitely takes place in some form, but this today is just audacious. I’m really appalled.”

Immediately before the election, on 20 September 2021, Russian Foreign Ministry spokeswoman Maria Zakharova published a Telegram post about the fact that only four OSCE observers would be deployed at the federal election in Germany. Zakharova used this fact to reject criticism from the EU about the Duma election in Russia, to which neither professional ODIHR observers nor OSCE parliamentarians were able to travel this year. RT DE wrote an article on this and raised the question of the “four OSCE observers” at the Federal Press Conference. The size of the OSCE expert teams sent to Germany has changed only minimally in recent years. However, RT DE’s video and article suggest that the number of OSCE observers this year was insufficient. Both posts were shared on Telegram, Facebook, VK and Twitter, often paired with doubts about the security of the federal election. The AfD city council group in Pirna shared the link with the comment,

“NO, nobody is planning to manipulate the elections in D … an unimagined flood of postal voters makes the OSCE obsolete!!!
Four OSCE election observers guarantee a correct federal election!
If we had more sausages, we would have more OSCE!”

This claim, alleging the number of OSCE observers was too small, was spread throughout Facebook in comments and posts.

3- The scale of electoral fraud discussion

After the first projections were announced, sweeping allegations of electoral fraud appeared on several platforms, flatly denying the election had any legitimacy. This can be observed in the figure below, which shows a peak in the use of election fraud-related hashtags on Twitter in the weeks leading up to the federal election. Peak A represents the the day before the election and immediately on election day, where online use of the hashtags #electoralfraud, #electionmanipulation and #falsification surged.

Peak B refers to a discussion about the “grandchildren’s letters” campaign, which called on children and teenagers to write to their grandparents about their climate concerns ahead of the election. In right-wing populist circles, this was described as “election manipulation”.

Overall, the community of internet users in Germany has been resilient to efforts to delegitimise the elections and their results, both at the federal level and at the state or local level. However, the US 2020 Presidential election proved how damaging misinformation and disinformation about the integrity of democratic elections can be for public trust in democratic processes. It is therefore vital that Europe remains vigilant against similar trends, even if they do not reach the same scale as was witnessed in the US.

In contrast to the US, the online dissemination of doubts about the election results in Germany is limited to conspiracy and far-right circles, as well as groups of AfD supporters. Several structural factors, such as higher trust in media and an electoral and party system that is less prone to polarisation, are likely contributing factors to this. While this means such narratives do not have a far-reaching or direct impact on general attitudes towards the electoral process in Germany, their repeated dissemination may well have a long-term effect on the attitudes of those engaged in these groups. This would include attitudes towards democratic processes and institutions, which in turn could lead to the consolidation of democratic scepticism, and ultimately hostility towards democratic processes.

While further research is needed to better understand the extent to which the spread of misinformation influenced public attitude towards the federal election, the combination of disinformation and conspiracy narratives with a general distrust in established media and political institutions – as witnessed around the election – is a trend that remains worrying in Germany beyond the act of voting.

Julia Smirnova is an Analyst at ISD, currently focusing on disinformation and extremism ahead of the Federal Election in Germany. Prior to joining ISD, Julia worked as a journalist for German publications such as Die Welt and Der Spiegel.

Hannah Winter is an Analyst at ISD specialising in digital research and investigating the emergence and spread of disinformation, conspiracy theories and extremist ideologies in social networks. As a member of the ISD Election Monitoring Unit, she researches political communication online, disinformation campaigns and attempts to influence elections.