Henry Tuck, Programme Manager argues that the threat of foreign fighters dominating headlines and stretching the capacity of European security services to breaking point, the hundreds of Westerners fighting against ISIS have attracted far less attention and scrutiny. However, many have voluntarily put themselves in harm’s way, apparently undeterred by official warnings that it is “strongly discouraged” to fight ISIS and, as one American fighter noted; “As long as you’re shooting in the right direction, at bad guys, they don’t really care.”

Fighting independently in foreign wars is not always illegal, but I would argue it should be.

Our new report, based on a database of 300 non-Islamist foreign fighters, has found that, despite largely honourable humanitarian intentions, a majority of these fighters do not have prior military experience or training. Those that make it to the frontlines (and this is by no means guaranteed) face possible injury, capture or death. As independent fighters they are not bound by a strict, regulated command structure and there is therefore little oversight of their actions in the conflict. Neither are they necessarily welcomed either, even by some of the local groups they seek to join.

Existing laws surrounding foreign fighters can be difficult or impractical to apply. Often legality is dependent on a state’s current allegiances. With the myriad of fluid, disparate groups operating in Syria and Iraq it is not always apparent where allegiances lie. Overseas war zones present significant evidentiary difficulties from a law enforcement perspective. As a result, the consistency of the application of these laws varies as much as the laws themselves.

This lack of clarity at worst tacitly endorses those foreign fighters more sympathetic to their own governments’ stance. Many countries have updated laws in this area in response to the unprecedented numbers of foreign fighters joining extremist groups. The legal implications of fighting against extremist groups have yet to be tested, and may only become clear through a future precedent-setting cases.

Foreign fighting is not illegal in the U.S., U.K. or Canada as long as you do not join a proscribed terrorist group or an entity fighting against the state or the state’s recognised allies. This allows fighters to join the YPG or Peshmerga as long as they do not commit war crimes or other criminal activities. The U.S. State Department has asserted that Americans fighting against ISIS are “neither in support of nor part of U.S. efforts in the region”. Former British Prime Minister David Cameron noted that there is a “fundamental difference” fighting with Kurdish troops and extremist groups. Reports in Canada suggest that returning non-Islamist fighters have had little, if any, contact with law enforcement.

France and the Netherlands do not prosecute those who choose to fight abroad on several conditions. They must not threaten their nation’s sovereignty or security, commit criminal offences (including murder), or join a group recognised by the state as criminal. France adds an additional caveat – you cannot fight abroad for personal financial gain. These laws create a complex situation where non-Islamist fighters are in theory able to join groups fighting against ISIS as both countries are members of the U.S. led international coalition. However they remain bound by criminal law. The killing of ISIS fighters in combat can therefore be a prosecutable offense, as a Dutch citizen that fought alongside the YPG discovered before the case was later dropped. Other countries, including Germany, Italy and Sweden, prosecute foreign fighters that found, participate in, recruit for, or supply any group whose intent is criminal and has the capacity or desire to use weapons or explosives.

Some governments do comprehensively prohibit joining foreign armies, regardless of their status, intentions or allegiances. This blanket approach to foreign fighters, adopted by countries such as Belgium, Switzerland and Australia, does not provide any special dispensation for those fighting against extremist groups. Belgium provides an estimated 9% of Western Islamist fighters, a considerably larger cohort than would be expected from a country of Belgium’s size. In comparison, only 0.6% of non-Islamist foreign fighters in our dataset are Belgian. Such a stance provides clarity and consistency, clearly outlining what is and isn’t illegal to those that are more likely to be deterred by legal sanctions.

Despite advocating a more comprehensive ban of foreign fighters, any new law should not be applied retrospectively to non-Islamist fighters that are currently embroiled in the conflict in Iraq and Syria. Non-Islamist fighters should not be prosecuted for a decision made under different circumstances, and those fighting against ISIS are likely to attract public support if there were any attempts to do so. A petition to have murder charges against the fighter in the Netherlands dropped reached over 65,000 signatures. Assuming they haven’t broken existing criminal or international war crimes laws, non-Islamist foreign fighters should be encouraged to return home and report their involvement via an amnesty.

The story of one British Army veteran that fought with the YPG is illustrative of the complications that can be faced by non-Islamist returnees; 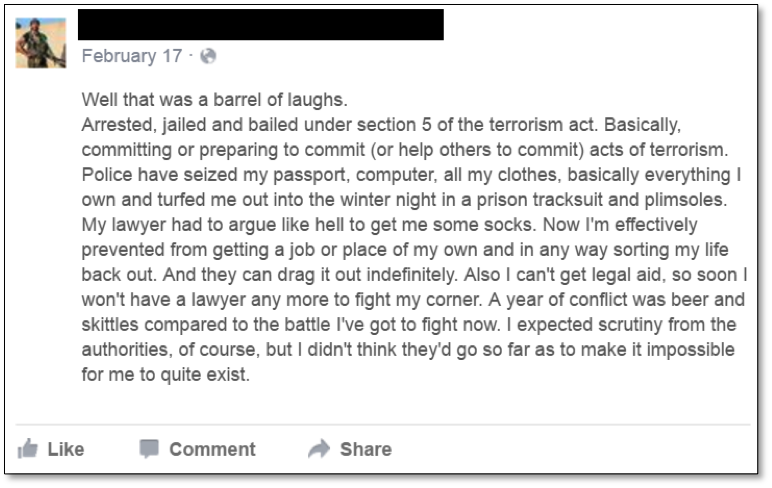 It remains unclear what the future holds for the hundreds of westerners that have fought, or are fighting against, ISIS. For those that do come home, the consequences of their decision to travel, whether physical, mental or legal, could be life changing. In the legal context at least, it appears many were unaware of the potential implications. With more legal clarity, such a situation could have been avoided. The conflict in Syria and Iraq is not the first to feature large numbers of foreign fighters, but considering the outcomes so far, we should make it the last.